A weedy day on the Chesterfield Canal

Saturday 18 July
I omitted my narrowboat injury from yesterday’s blog. As the name suggests, our boat is rather narrow and walking along the corridor can have its down side, especially when there are obstacles left on the floor such as discarded clothes! Yesterday morning, in our rush to get moving, we hadn’t cleared up all the debris from the previous night, and I managed to stub my toe on the underside of our bed. Boy it was painful, and I think I may have broken it as it’s swollen and bruised and I can’t bend it. Ah well, just one of the daily hazards! 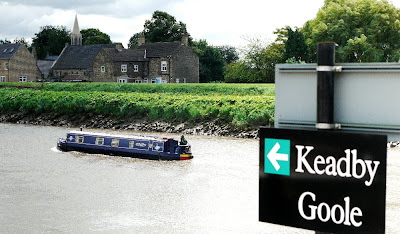 This will be us in a couple of days maybe! Doesn't the narrowboat look small on the Trent?
We motored up the Chesterfield canal today. Well, when I say ‘motored’, I’m probably exaggerating! It was so slow we thought we must be dragging something underneath us due to the amount of the weed along the canal. Apparently it (the weed) ‘appeared’ in 1852 and has been a ‘bit’ of a problem ever since! We heard later on that the weed raker machine that normally clears the canal regularly has broken down. Let's hope they get it fixed in the near future or the canal may be overgrown and hard to find! 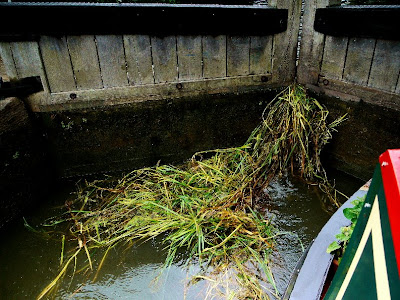 Weed congregating at the locks 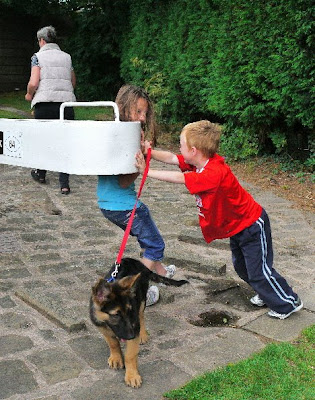 A couple of local kids and their dog Alfie helped out with one of the locks and didn't fall in! 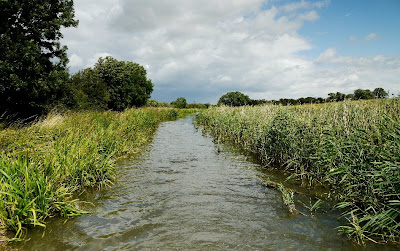 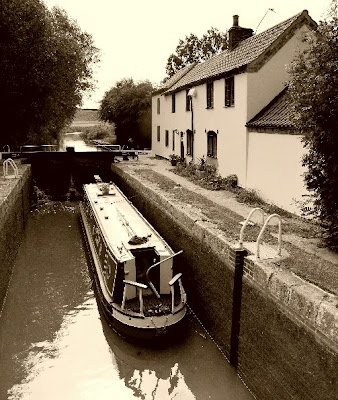 The locks were hard work and quite slow. This picture was taken in 1872 (yeah right!) 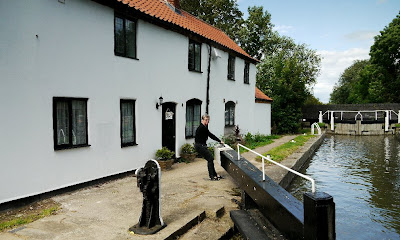 Closing the lock now in 2009! Sandra nearly got a hernia with the effort involved! 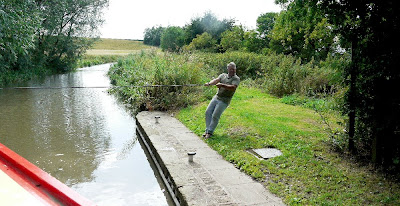 The boat went a little pear shaped at this point and Barry tried to match Sandra's hernia inducing effort! 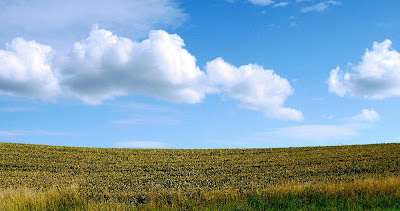 On the positive side, the sun was out today for a nice change 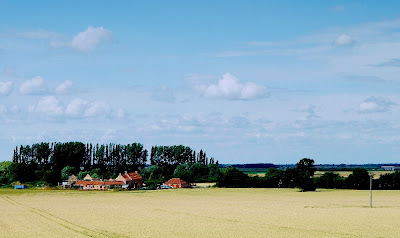 The scenery is very flat all around, lots of agriculture ... 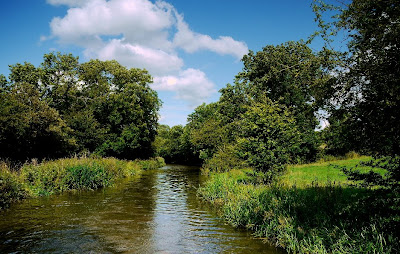 as well as lovely tree lined areas
We moored up at a place called ‘Drakeholes’, a ridiculous sounding place! Shortly after tying up, we got chatting to the people on the boat next to us, Ray and Pauline. During the conversation Ray asked if we’d heard about the man who’d been murdered on a narrowboat in a recent ‘boat rage’ incident—OMG, you can’t be serious I thought and laughed, but yes 'twas true. It appears that a fifty six year old man died after an ‘altercation’ with a seventy two year old man over mooring rights, and apparently fists had flown and the younger man collapsed and died. Now all due to respect to his poor widow, but seriously, isn’t narrow-boating supposed to be about slowing down, chilling, taking it easy; not smashing someone’s face in and killing them because they pinched the space you were going to park your boat in?!! What is the world (well England and the English anyway!) coming to? Go to http://www.narrowboatworld.com/ for more (and other fascintaing narrowboating news!), or directly to: http://www.narrowboatworld.com/index.php?option=com_content&view=article&id=589:lancaster-killing-was-boat-rage&catid=2:latest&Itemid=16 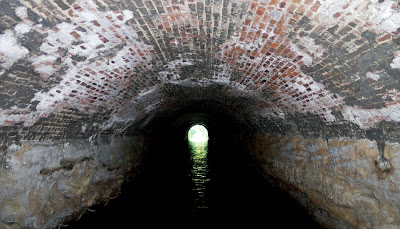 Drakeshole Tunnel, not very long 154yds, cut through the limestone that can be clearly seen along lower part of the tunnel. Must have been built by a Mr Drake?

This evening we had a two mile round walk to Wiseton where there is very little apart from a Manor house and some very posh homes, along with stables and a race horse training circuit. It seems rather upper crust around here which was brought home to us when we went to The Swan across the road from the canal for a drink. Three people walked out of the pub and distinctly turned their heads away from us sitting outside so that they didn’t have to make eye contact and therefore say ‘hi’. What amazingly stuck up people they appeared to be! I reckon it’s because Barry hasn’t had a shave for a few days and is starting to look like a down and out!

A view across the countryside from our walk 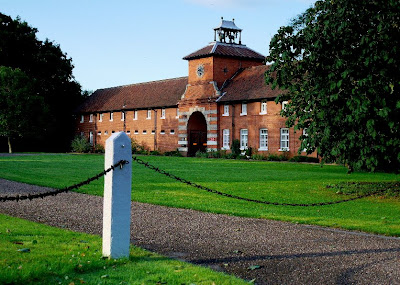 Wiseton is a small, elegant, estate village built around the manor house along with a large stables. This is the stable and clock tower, lots of 'please keep off the soft verge' signs (no pavements though and a narrow road, so they obviously don't care if you get run over so long as you don't mess the verge up!) 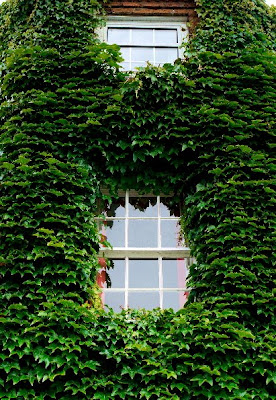 This was the best way of showing you Barry unshaved without putting you through the trauma of the real thing!! 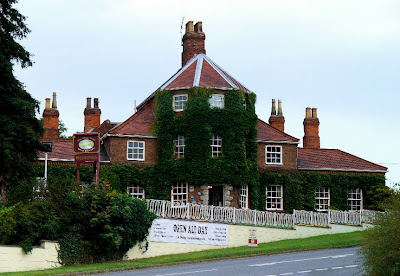 The snooty Swan pub across the road from our moorings 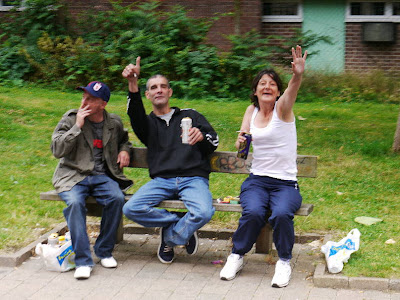 A photo from Nottingham showing some 'salt of the earth' people. Sandra walked past this probably homeless couple on the way to pick up Jill and Den; then walked by them again with Jill and Den; then the boat moved past them. They were so excited to see Sandra on the boat having said hello twice before, it was like seeing an old friend. Bless them!

After dinner we went for a couple of drinks onto Ray and Pauline’s lovely boat (with my poorly toe throbbing after the walk!). Spookily enough, they'd been given an AA Road Map of New Zealand today by a fellow narrow-boater, as they're planning a trip there in 2011, so we were able to give them our first hand knowledge of the Southern Hemisphere.

We’re not sure now whether we’ll turn back or carry on tomorrow, it depends how the mood takes us when we wake up …
Posted by Northern Pride