Keadby Lock – definitely not for the faint-hearted!

Up and out early this morning to catch the tide on the Trent. However it probably wasn't early for many people, we had to be in the lock by 0930! A lovely lock-keeper on duty called Sue.

We had a chat with another couple of narrowboaters whilst getting some diesel at the lock, and recalled our bad experience at The Waterfront pub last night. They too had a similar tale, so it’s not just Barry’s stubble after all! Seriously we wonder why on earth some people go into the pub trade when they are so unfriendly. The Landlord seemed to go out of his way not make eye contact so he wouldn’t have to talk to us (there were only three other people in the bar!), there were printed signs placed in strategic places both in and outside the pub “don’t do this”, “don’t do that”, goodness me, you’d think he wanted to vet everyone who entered his precious premises! And there was just one ale on tap, John Smiths, which is possibly the cheapest you can get but he certainly wasn’t selling it for what it was worth! Anyway, enough negativity for one day. Just making the point that you really get to see different personalities when you travel around the country, and how stark the contrasts can be. 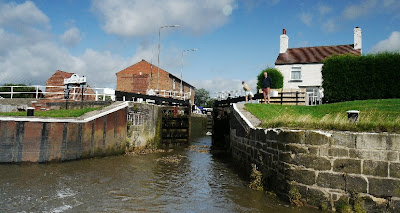 On the way out of West Stockwith Lock

One of the little villages along the way, protected by a formidable stop bank 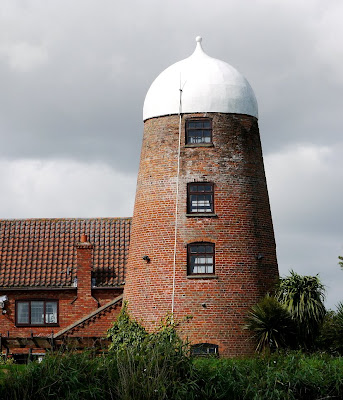 Remnants of the Dutch influence in the area. Now a lovely home complete with heli pad

The tide was flowing swiftly up river as we emerged onto the Trent, and the wind was blowing strongly. Quite a choppy river and we were moving along at about seven miles an hour, quite scary after the slowness of the Chesterfield canal! We phoned Keadby Lock as we went under the M180 bridge as Barry had instructed, and he asked if we’d been given instructions on how to get into the lock. I wasn’t sure what Barry had been told as I hadn't been with him when he was talking to the Lock-keeper at West Stockwith. He said to start turning when we got to the blue crane or we’d go past the lock. I duly relayed this information on to the captain as I was in the cabin working on my writing.
As we approached the blue crane it was really difficult to tell where the entrance to the lock was, but Barry commenced his manoeuvres to turn into the lock. All was going well until we were about 10 yards from the entrance when the boat stopped turning and was just heading directly into the metal walls of the river Trent, me sitting on the deck at the front of the boat. Now I know what people say when they saw their life flashed before them! Except I didn’t have time to think anything apart from “..WTF, we’re gonna hit the wall and we’re travelling at a great speed and the boat is going to break in two!!!” Crash, bang, sound of breaking glass!! OMG, my heart was in my mouth. Thank goodness Barry managed to continue and drive us safely into the lock from there, with the lock-keeper looking anxiously on asking if I was OK. I felt sick and was shaking all over, how on earth do the fainthearted manage to negotiate a narrowboat into that lock I wondered? Never again, I’m deadly serious, that was possibly the worst experience on this trip and I hope never to repeat anything similar. Apparently when we got close to the wall we were in the shelter from the wind at the front of the boat but being blown at the back and Barry didn't have enough control to correct it before it was too late. 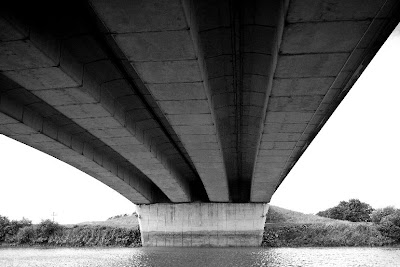 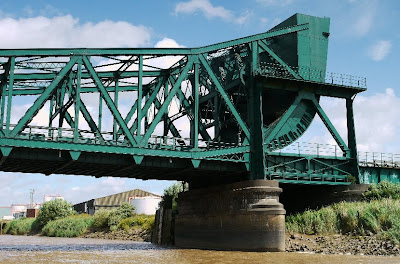 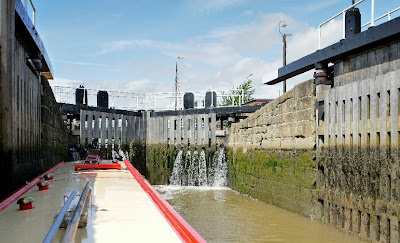 At last the safety of Keadby Lock 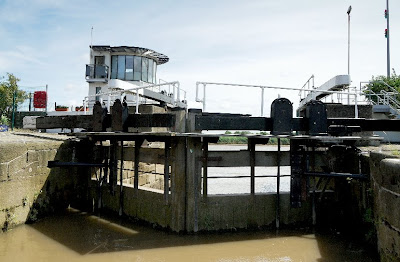 The gate firmly closed on the Trent... Hurrah!
The lock-keeper joked as we left that we were now “… back onto the duck pond” bless him! It was certainly a relief to be back on a canal and away from the raging River Trent. We surveyed the damage: a broken steel pin on the front fender (thank goodness for fenders, it took the majority of the impact), two broken pint glasses, my candle in a box had smashed glass on three sides but luckily not the part with roses painted on, things strewn all over the cabin and kitchen and the microwave was teetering precariously on the edge of it’s shelf – phew! I had snifter of Barry’s home-brew rum just to settle my stomach which was feeling extremely nauseous, but my hands had stopped shaking. Crikey, I never know what the next day is going to bring that’s for sure!

No more locks on the stretch of canal we were on today, but numerous swing bridges. The first couple were OK, though hard going when you have to literally lift the barrier that stops cars from going onto the bridge. My lower back’s a little dodgy after struggling with the very heavy lock gates on the Chesterfield canal, so that didn’t help it any!
You may wonder why I'm doing the locks and life bridges if I have a sore back?! Well Barry offered to do the lift bridges while I drove the boat in - I accepted reluctantly at one point, took the boat through the lift bridge, and was duly carried across the canal precariously by the wind! After the scare on the Trent I said "No thank-you" and handed back the driving to the Captain. Sore back or not, I'd rather be on land than doing the tricky negotiating!

The first swing bridge negotiated OK
(maybe because it was operated by the lock-keeper!)

No problem for the second!

What do you mean a sore back, it's only a little bridge!

Don't know why they couldn't just build them higher 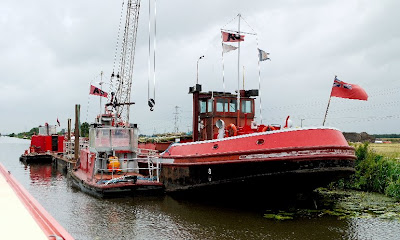 At the fifth swing bridge the whole finely tuned (or not!) mechanism decided to stop working, and we got well and truly stuck! The bridge had opened and Barry had gone through, but once I’d closed it and tried to open one of the road gates, everything went pear shaped! The road barrier wouldn’t lock in place, so the other barrier wouldn’t open at all and traffic came to a standstill! Our British Waterways (BW) key meanwhile can't be removed from the box until the bridge is closed and the barriers are open. The couple on a cruiser coming the other way and trying to reach Keadby lock for the morning tide were not too happy, and to cut a long story short, we left them waiting for a BW call out person to come and sort it out, having got a BW key from the man living at the house by the bridge (thank goodness there are some decent people in the world!). 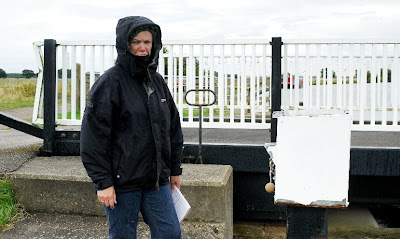 Not looking very happy ... and raining ... and the language ... appalling!

We waited and waited 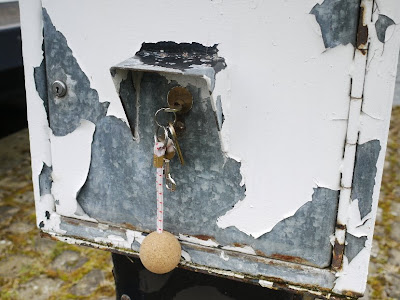 The key firmly stuck in the lock
So all in all, it’s not been a good day on Barry’s Riverboat today!

This one worked OK 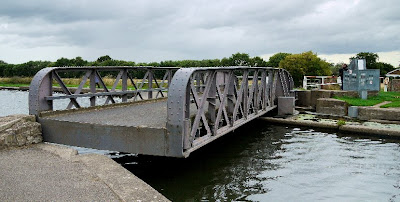 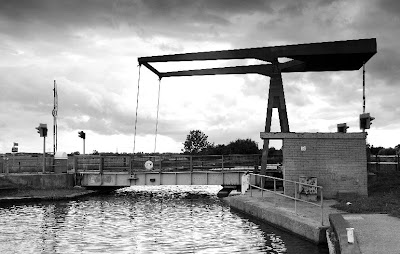 and now for something completely different ... 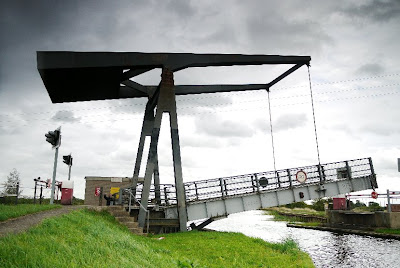 The last swing bridge, a very stiff footbridge, opened by Princess Anne in 2005. Pity she wasn't here today to open it again for us!
However there was some good news. My third cousin (not sure if that's how it goes?!) Catherine, Dave and Rosalyn’s daughter, has emailed to say that the grave next to Hilda was her great grandparents, and my great, great grandparents, Charles and Sara Scott. So they aren’t complete strangers after all which is reassuring and so cool to learn more about my ancestors. We’re going to meet up with Catherine next week to learn more …
We’re moored up tonight at Thorne and plan to stay here for a couple of nights for a bit of a break from all the excitement! 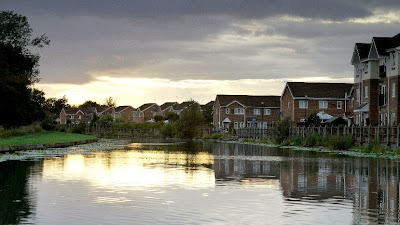 Sunset from our mooring tonight
Posted by Northern Pride