A life-saving visit to the shop

We're preparing to go back onto a tidal river, so visited Selby Marina this morning. It’s a bit sad how exciting it is shopping in Chandlery’s now rather than clothes shops! It was a very fruitful visit, though not for the budget. We bought some better fenders (which stop the side of the boat bashing against the side when we’re moored up), and the crucial purchase was a modern life-jacket for me as the ones we inherited with the boat are ancient, they may've been with Northern Pride since 1989! This one has a special saline canister in it so that if you fall overboard, especially if you bang your head on the way, once the jacket becomes submerged, it inflates and turns you turn over and subsequently you don’t die! Or at least that's the theory that I hope never to test. Fifty quid very well spent in my view. Barry chose not to have one, he believes he's invincible, and I hope he's correct! We don’t really need it on the canals as most of them are so shallow you could stand up in them. 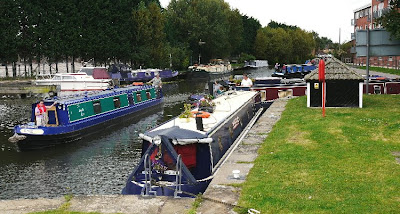 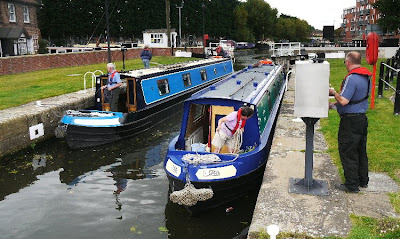 All wearing life jackets like Sandra just bought, even the lock keeper 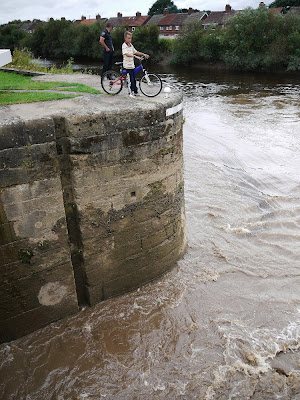 All the way down to the Ouse - would you trust your young child on a bike here?! 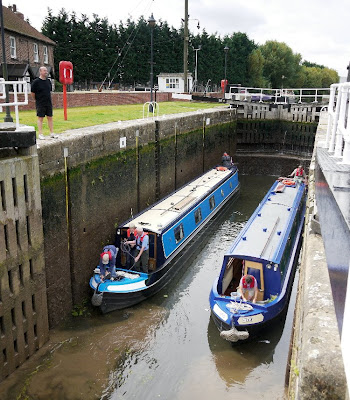 Ropes away, onto the river ...
.
Luckily we found a neat place for my mum and dad to park their car. At Selby Lock there's a car compound at the end of the towpath opposite the lock-keepers cottage for the long-term moorers, and he was happy for them to park there overnight so it would be safe and secure.
.
My parents arrived mid-afternoon and we were held up briefly by the local youths who'd caused the relief lock-keeper trouble yesterday. We got chatting to them and they invited themselves onto the boat for a look around, they were OK really bless them, just bored as I'd thought. One of them even decided he was going to buy the boat (we've put for sale notices up now) as his granny was leaving him some money - shame for him, I think he was about 15! We've had quite a bit of interest since placing 'For Sale' signs on the windows a couple of days ago, but I think secretly neither of us wants to sell it as it's such a lovely boat and we'd love to return and do this again next year!
.
We eventually ejected the kids and had a trip into Selby and a walk round the inside of the Abbey – but just a short one as it shut at 4pm and we didn't get there until 3.30. Then a stroll around the shops and back to the boat for tea and cakes, spaghetti bolognaise and later on a movie 'The Game' on the computer (we don't have a TV - well that's a lie, we have one in a cupboard under the stairs that we choose never to take out!). 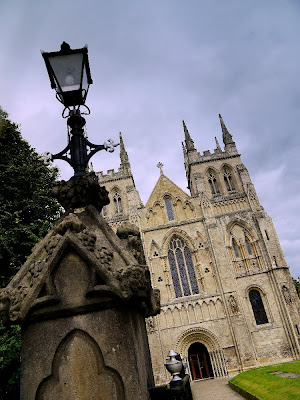 Another visit to the abbey in Selby - currently being cleaned up and the town-square in front is having new paving laid, it'll look very smart when completed 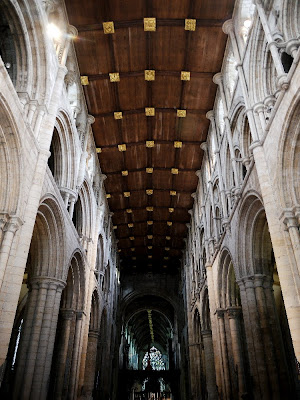 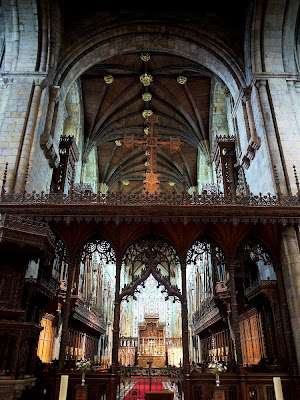 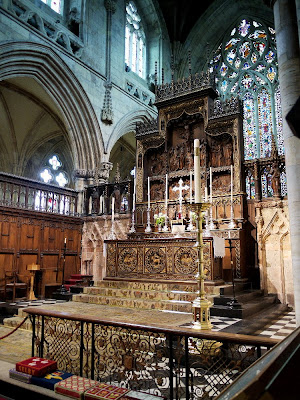 Sandra and a fake Benedictine monk.
Their days began at 0200 and they went to bed at 1715 - can you imagine that?
The weather's turned very changeable (hardly surpsing for England!), I think we had the best of the summer in 'flaming June'; not sure if there’s any good warmth and sunshine left to come but it certainly doesn’t feel like it at the moment.

The forecast for the next few days is rain, rain and more rain; so we’ll have to see where we can moor up that's not likely to flood when we start our journey into York tomorrow.
Posted by Northern Pride