The best of both worlds

Today we headed towards Selby as we'll meet up with my mum and dad for the night there, on Tuesday, on their way up to High Force near to Durham for their 54th wedding anniversary.

The current canal is a ‘broad’ one, with lots of large, swanky cruisers around who seem to not feel the need to slow down when they drive past moored narrowboats and subsequently we rocked and rolled all over the place on our mooring this morning. We're certainly noticing increasingly how England remains such a 'class' based society, and from what we've seen it's definitely the ones in the lower to middle classes who have the most style and friendliness! There’s a small element of that in New Zealand, but thankfully it’s a minority, which is so refreshing, and one of the reasons I choose to live there. 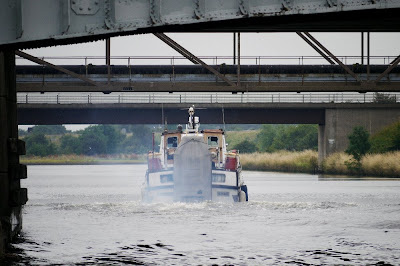 A cruiser motoring away leaving us rocking

In case anyone needs another power station photo!
The landscape is just covered with them here

Different scenery this time, a colliery (coal mine) at Knottingley 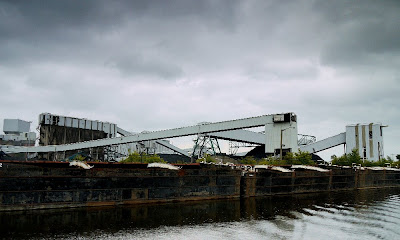 A line up of barges for the colliery 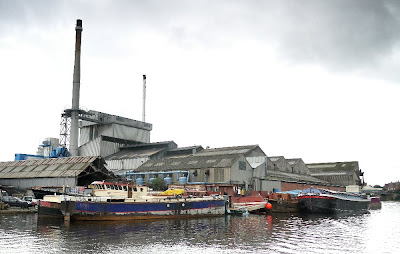 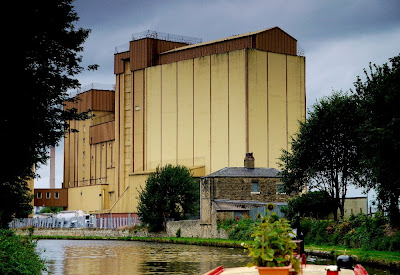 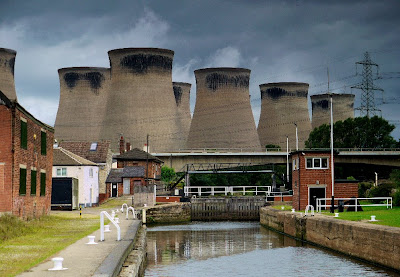 The lock onto the Aire River. We'll go through on the return from York
Guess what's in the background?! 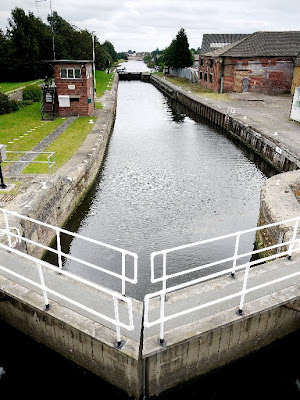 A massive lock built for the big 700 ton barges
This was brought back to us once more after we moored up at a place called Ferrybridge, not far from Knottingley. We took a detour as we were informed that there was a good Morrison's supermarket close to the canal. However when we investigated from the mooring, all we found was some quite distressed looking buildings (mainly council houses), boarded up shops, and the odd skinhead type bloke walking around with his four-pack of Fosters and Alsatian dog, who should’ve looked quite menacing but actually appeared fairly harmless. We did, however, discover a local grocery store with a limited stock of provisions and got what we needed there - cash purchases only mind you!
.
The majority of live-aboard narrowboaters are great people who seem to have discovered the meaning of life, and are therefore choosing to live at a much slower pace whilst savouring their magic moments. However, they're obviously mostly folks in their later years who can afford not to work, or to work intermittently, so that would make a difference to their attitudes I suspect. They've also learned to survive happily on a limited budget, something we're becoming accustomed to now.
.
We thought we’d then turn around and go a bit further towards Selby, but Barry decided he’d do a bit of grinding on his new rear hatch first as we were in quite an isolated place. As he was preparing this, another narrowboat moored up and of course Barry got chatting to them and found out they were from Nelson, on the north of the South Island of New Zealand! 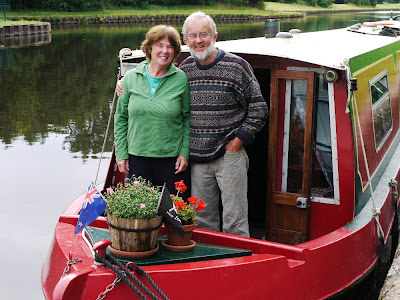 Jenny & David from Nelson
Originally from England, they'd lived in New Zealand since the late 1970’s, had bought their boat a few years ago and been coming back to England for the summer since then. There’s obviously a number of ex-pats who do this regularly – who choose not to live and work in England for a variety of reasons but still feel a need to come back to visit, whilst retaining the option of living in the Southern Hemisphere. I suggest it’s called ‘having the best of both worlds’!

So we had a very enjoyable evening on each others boats (is that called a boat crawl?) eating nibbles, drinking wine and Barry’s home (boat?!) brew; and then having a Sunday dinner (that's tea in English terms!) of beef, roast potatoes and Yorkshire pudding. Marvellous! What a joy this living spontaneously is.
Posted by Northern Pride