A dry boat but beer in the lock and pub!

Sorry for the delay in this post, Barry has had the photos ready for a while but I've been a little stressed with a few challenges here.  His mum has been in hospital again and we've finally got some sort of diagnosis and she seems to be slowly recovering, but only after having to fight for her rights to be treated like a human being and not just 'an 86 year old woman'.  The health service has a lot to answer for when we're put out to pasture when the funding dries up due to our age. I hope there's a 'Sandra Walsh' to passionately fight my corner when I'm old and not yet ready to be passed over!

Work has also been very busy, and a worst of all a friend's son has died under tragic circumstances.

So all in all, I'm looking forward to our little trip away next week as our house is rented once again to people coming for 'Te Matatini', a huge Kapa Haka festival, with about 20,000 people descending upon our little city once again.  So we're leaving the area for some peace and solitude, travelling about an hour and a half away to walk the track of Lake Waikaramoana - which in Maori means the 'Sea of rippling waters' - and one of the 'Great Walks' of New Zealand.  It's a remote place, with no phone coverage, and we'll walk the 46 kilometres over four days carrying all our own food, cooking stove and sleeping gear, staying in basic hut accommodation along the way.  I'm looking forward to the bliss of being away from civilisation for a while and getting lots of fresh air and exercise - whilst hoping that it doesn't get too wet and cold despite it being summer here still!

It's getting harder to take myself back to the canals of Britain, but I remember this next day fondly ...

We had a late start this morning, with little inspiration to rise from the weather which was grey and damp.  The feeling continued until the Cowley Peachey Junction, which looked like it would be a delightful place in the sunshine, with a canal-side cafe and quaint lock cottage.

I'd just put a couple of beef slices in the oven for lunch while I did the first lock since Camden, when I saw a 'Sunday Roast' advertised for £5.99 - extremely tempting but sadly we'd spent so much on our trip to Paris and during Tom's visit that we have to be extremely frugal now to last till we can earn some more money in November! 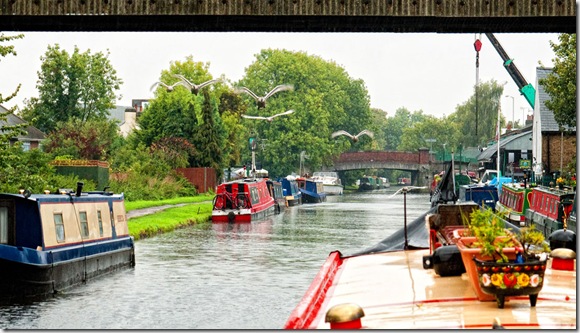 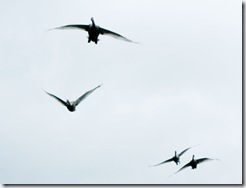 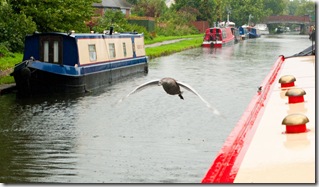 Teenage swans having their first tentative flying lessons along the canal 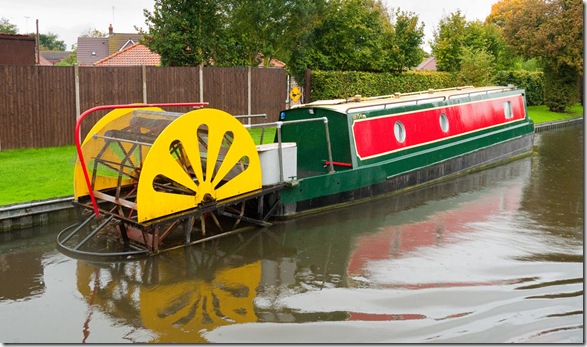 We've seen some interesting boats on the canals, but this one takes the biscuit!!

After our recent break from locks, our journey up the Grand Union made up for that with an abundance to negotiate.  Today our treat was 'Denham Deep Lock', which at 11' 1" wasn't as cavernous as our recent encounter in Bath, but the deepest on the Grand Union and still a feat with swirling, dark brown water to empty, which with the froth from the rapid movement resembled a lock-full of beer! 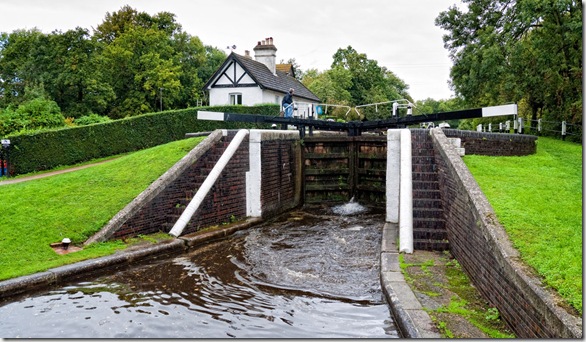 Sandra back on lock duty 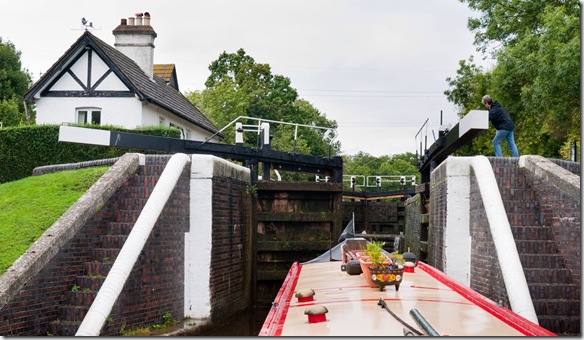 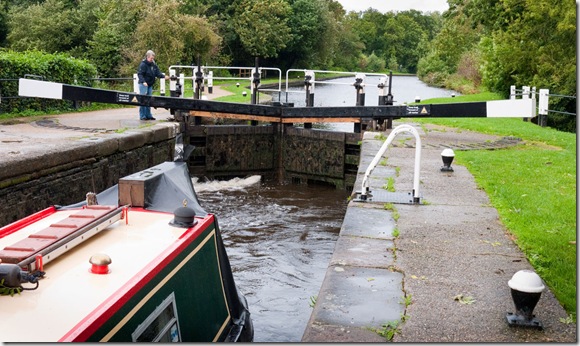 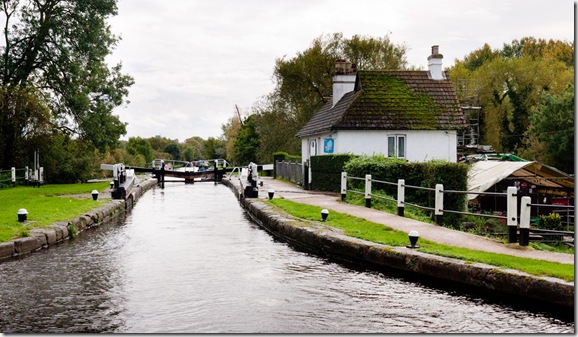 Out of the lock and approaching Denham Country Park

Our destination over the next few days was Hemel Hempstead, as I'd managed to find cheap tickets to Brighton at the weekend to see Kim and Joe.  So we aimed to saunter casually along over the next few days, doing boat maintenance and odd jobs, packing and sorting our 'stuff', and eagerly anticipating a phone call or email that says "We want to buy your boat please?"!!

The weather brightened up late in the afternoon, with a tinge of blue sky peeking through the clouds which were now a lighter shade of grey.  Having been tempted by the roast in the pub I managed to whip up enough food from our meagre stores to cook our own 'Sunday Roast', then we wandered along to the pub up the road - still a dry boat for a couple of weeks until the last 'boat-brew' is ready. 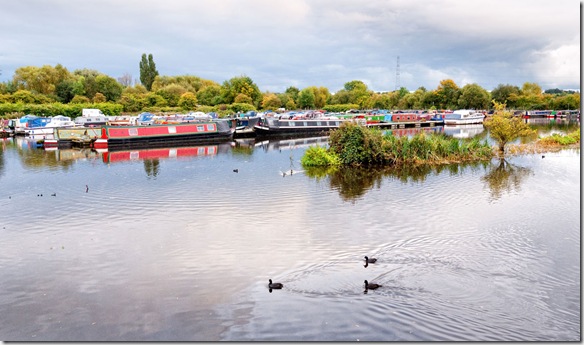 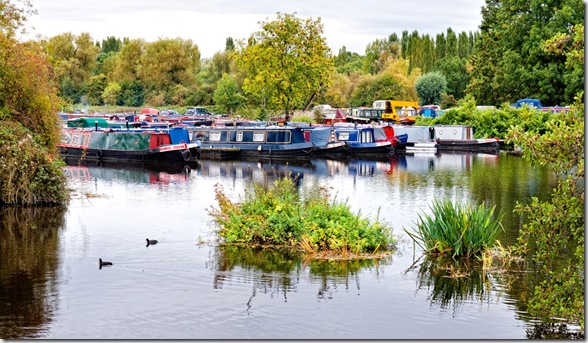 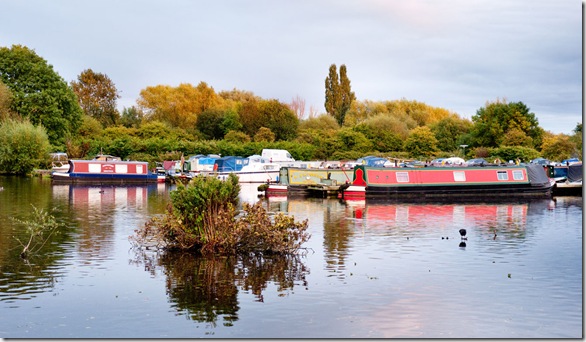 The venue for the evening was the 'Horse and Barge' pub with huge empty gardens and restaurant.  We couldn't see anyone inside, despite all the lights being on.  We tentatively entered and discovered four punters and two barmen, one of whom had taken over as Landlord the previous Tuesday.  He later told us he'd probably be out again by next Tuesday!

The conversation after the film turned to the stress of running a pub in today's economic climate and they told us about a pub nearby that had recently shut down as the Landlord had mentioned to a couple of patrons that he was growing something illegal upstairs - those two told more, who told more, until it came to the ears of the local constabulary who raided the premises and he was arrested and the pub never re-opened.  So many pubs in Britain are struggling, apart from, it seems, Wetherspoons.  The Irishmen told us that the owner of the chain, a fellow Irishman, had been told by his teacher he'd never amount to anything - he's having the last laugh now with hundreds in the chain across the UK!

It certainly was a most unusual evening, you never know with these pubs what you're going to find, but as Barry says if you don't sit at the bar no-one talks to you - maybe that's a good thing, lol?!