A surprise visit 'down under' from fellow narrowboaters ...

... coincidentally at exactly the same time as a visit from some friends from UK who had booked in with us over a year ago!

Barry was in the shop on Monday, while I was sleeping before my fourth night duty (we're rather short of midwives currently so I'm having to do some extras!), and a couple came in and asked him if he knew who they were.  Now we were expecting my friends, Jean and Jeremy, to arrive the following day as part of their whistle stop tour of New Zealand, so poor Barry was rather confused.  He finds it a challenge to remember the names of people he's known for years, never mind those he's only met a couple of times, so although he recognised their faces he couldn't place them.

But then the name of a canal - The Chesterfield canal to be precise - was mentioned and he immediately knew Ray and Pauline!  His memory for places and waterways in UK is incredible.  Ray and Pauline were moored with us in 2009, along with the lovely Pete who we also caught up with again in 2010.  We bumped into Ray and Pauline in 2010 at The Black Country Museum.  Ray says he initially saw a young couple and thought we'd sold the boat, but he'd spotted my Godson Mikey and his girlfriend Sophie.

So on Tuesday evening we had a dinner party for six, instead of four, and were even more flabbergasted to discover that Ray and Pauline live 20 minutes from where Jeremy used to live in Lowton.

Barry was in his element chatting about the waterways and reminiscing about our first meeting with Pete. It was so lovely to see you both, thank you for dropping by and we'll catch you again in 2013 I'm sure!

Jean is a midwifery colleague I worked with in England when I was a Project Lead for Midwifery Recruitment and Retention with the Department of Health, Jean was a Local Supervising Authority Officer and Jeremy is a retired judge.  They're now making the most of their spare time and every two years have a big trip - this year it was to the Southern Hemisphere and they added two days onto their packed itinerary to see us in Gisborne, and we had a fabulous day doing touristy things on Wednesday - in the afternoon we went sting ray feeding at Dive Tatapouri, a short drive up the coast, something I've wanted to experience for ages.  Jean was rather worried that she'd get stabbed, but they were the sweetest, gentlest sea creatures you could imagine.  Only Jeremy had a waterproof camera, so I haven't any photos to put on here yet, but I'm sure he'll email some in the future.

As Jean was leaving to return to their motel, she asked quite innocently "Is that a toy?"  I looked at where she was pointing and there, to my absolute horror, was a dead rat lying prostrate in the corner of the lounge (rather than the 'rat in the kitchen'!).  Barry assured me that he'd vacuumed the evening before and it wasn't there then, but it was extremely stiff - blooming cats aye, but better a dead rat than a live one I suppose!

Six weeks and six days before we return to UK …

Sadly not to come back to the canals, but the next time it will be – that’ll be in just over 13 months time now.  So the countdown is on, and there’s a lot to do in the meantime.

We’re flying from Auckland in the early hours of Wednesday 7 March and will be there until Tuesday 27 March, so a whistle stop tour catching up with my family, which includes a weekend at Northmoor House in Devon for my mum’s 79th birthday.

We had a great time camping at Pouawa from 28 December to 10 January, despite some dodgy weather when everyone (or so it seemed!) except Barry and I returned to town because we had an approaching cyclone!  During the two weeks of living next to the sea Barry and I continued to work as normal, and early one morning as I drove to the maternity unit in town, along the road which hugs the coast-line, I was blessed with a spectacular sunrise … 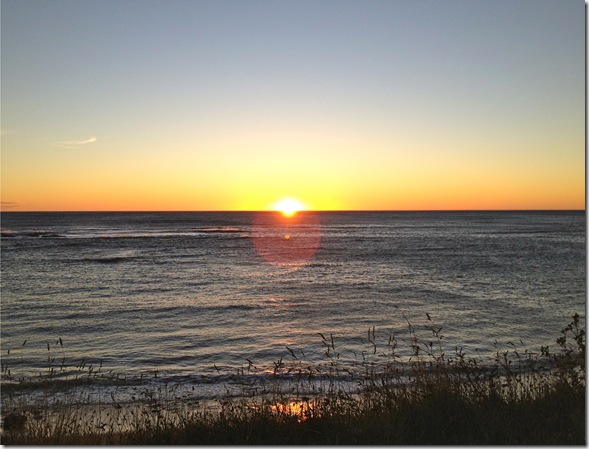 Awesome, it made getting up at 0530hrs well worthwhile!

Not much else to report really, it’s just heads down, work our little socks off to earn as much money as possible, pay off debts, de-clutter our (far too many!) belongings, get the house ready to sell by September and save to buy a lovely narrowboat in the spring of 2013.  I’m worn out just thinking about it, but it’s also very exciting to think I’ll be coming back to England to spend time with my family again, I miss them heaps.