Sailing the Severn Seas and other watery themes ...

Following my plea in October to anyone who may be able to help us with advice about travelling from Sharpness to Bristol, Paul from Waterways Routes emailed and said he had a DVD that he'd filmed in 2005 with Granny Buttons sailing from Bristol to Sharpness, and recently sent me a copy bless him.  Barry and I watched it with interest last week and I'm relieved to report that it's reassured me the journey could be possible in Northern Pride in 2010.  The conditions on the day they sailed seemed perfect, and of course you can't guarantee such calm weather on the day you want to travel, but nonetheless it wasn't half as scary as I'd imagined!  We'll investigate pilot options closer to the time; it'd certainly be an adventure to look forward to and one that Barry's very keen to experience.

We've been busily organising our Wainui Beach wedding which is in just ten days time!  'Wai' in Maori is water and 'nui 'means big - it certainly is a large expanse of beautiful beach and Pacific Ocean.  The weather here has been in the late 20's all week, but one never knows whether it'll last, and there's a southerly change approaching.  So we can only hope that on 22nd December, at 1600hrs, the sun will be shining upon us as we make our 'official' commitment to each other in front of around 120 guests!

On other things watery, we've recently completed our new fishpond in the garden.  The one we left when we went to UK sort of evaporated, the lodgers didn't keep the water level topped up and it was only lined with black plastic.  We returned to just one of the original goldfish in a tank in the living room :-(  Never mind, we now have a purpose built pond liner in, have made the surroundings very peaceful and three goldfish and a couple of boggle-eyed fish are swimming happily around. 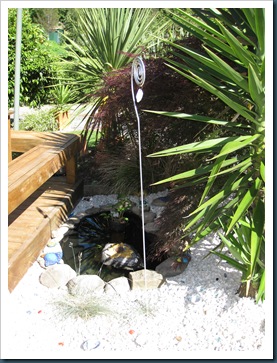 Another pertinent story is of the dolphin that's made the east coast of the North Island of New Zealand its home for the past couple of years.  Moko had been a feature of Mahia, a stunning seaside settlement about an hour's drive south of Gisborne, until the end of August 2009 when he moved here.  He's currently seen most days close to Waikanae beach, minutes walk from Gisborne town centre. 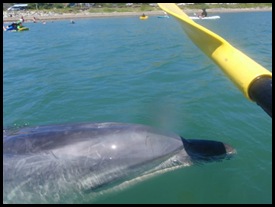 Unfortunately I haven't had chance to see him yet, but maybe when I've got three weeks off I could be lucky.  The drawback is that there'll be thousands of summer visitors coming here in the near future who I suspect will also be dolphin spotting!

We were delighted that Granny Buttons wrote a blog about our blog (!) a couple of days ago - in fact I'd go as far as to say that Barry was beside himself with glee to see us featured in the blog of which he's been an avid follower for about 18 months now.  Who'd have thought this time last year that we'd be seeing ourselves in print in such a way.  It just goes to prove to me once more how important it is to follow your dreams.

Exciting times ahead, the next blog will be around Christmas time when we'll post some photos of our wedding.  We're going to Anaura Bay, Rangimarie Beachstay for two nights afterwards, which must be one of the most stunning places to stay.  If you look closely at the photos on the attached link you'll see me at the table when I stayed there for a weekend of writing in November 2008.  We're staying in the cottage, and may even venture out one night into the Balinese-style sleeping platform - heaven on earth!