Surprisingly we have free wifi on the island of Nusa Lembogan, so I thought I'd write a quick post and show you how they celebrate here ... 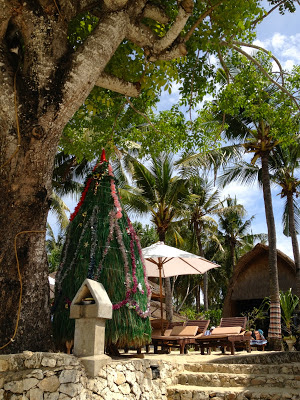 Barry and I wish all our readers a very Merry Xmas - have lots of fun, love and laughter over the festive season.
Posted by Barry and Sandra No comments:

As Audrey Hepburn says, "Nothing is impossible, the word itself says 'I'm possible'!"

When I immigrated to New Zealand in January 2005, the rules had just changed for gaining citizenship from three to five years. Now we're planning on returning to UK for the foreseeable future, the rules for 'indefinite leave to remain'  significantly altered to become far more challenging in July 2012! However we shall not be beaten, we'll just need to re-think our original plans, knowing that things happen for a reason ...

We've now spoken to Colin at ivisas and have a plan!  The rules are very stringent, and although I've never been very good at following such autocratic things, there are times when it's imperative and this is one of them!  So, the settlement date for our house sale is 31st January 2013, at which time we'll have sufficient 'cash' to both meet the visa requirements and buy a narrowboat to live aboard.  The catch is that we have to have that money in an account for a minimum of six months before we can apply for Barry's visa, and then hold it for the following five years - or else have 'proper' jobs that earn a minimum of 18,600GBP per annum.

That's OK, we can work around that - we'll still be flying to UK on 19th March 2013, it just means Barry will have a return flight to NZ sometime in August/September and will then apply for his settlement visa.  In the meantime we'll be gathering the required evidence to support his application so that, fingers crossed, it'll be plain sailing from then on.

On a different note, at 0600hrs Wednesday 19th December, I'll be flying from Auckland to Bali to meet my daughter to celebrate her 30th birthday on 4th January. When I tell people I'm going away without Barry for xmas and New Year, they frequently inform me the world may end on 21st December - let's hope not, we've got so much living left to do ...

If I don't get a chance to post another blog before I return to NZ on 10th January (and the chances are I won't), I hope you all have a wonderful Christmas, filled with love and laughter, and a very Happy New Year.

Posted by Barry and Sandra No comments:

A wonderful time with my sisters - and a slight hiccup in our plans to return to UK ...

It's been many a week since my last posting - apologies everyone!  Two of my three beautiful sisters have been in New Zealand on holiday - we've had such an amazing time which didn't include a space for blogging!

It was Barry's birthday on Thursday, so my poor sisters will have been extremely tired on their flight back as we had a party on Friday night which went on until the small hours.

Our hiccup is with the requirements for Barry's UK visa - these all changed in July 2012, and it seems an even more complex process than before, so we've been going round and round in circles.  There's financial requirements we have to meet (understandable), that don't seem to take into consideration self-employment or the possibility of living on a narrowboat!  So today we've contacted an agency in the hope of acquiring expert assistance.  Otherwise, if there's the slightest problem with any part of the application form or supporting documentation, they reject it and charge us $1,700 a time.

We can't apply until three months prior to our departure on 19th March - and on 19th December I'm flying to Bali to meet my youngest daughter for her 30th birthday and won't be back in Gisborne until 10th January.  Barry's children Jamie and Tom will be keeping him company for xmas and New Year, which, we hope, will be his last ones for a considerable time - if all goes to plan!

We're keeping positive and are very hopeful we have evidence of suffcient funds to support us, and of our relationship of seven years and marriage of three, so that we'll be 'let in' to UK in March - otherwise we'll be homeless in Gisborne as our house is sold which could prove interesting ...
Posted by Barry and Sandra 4 comments: