Who are Barry and Sandra? 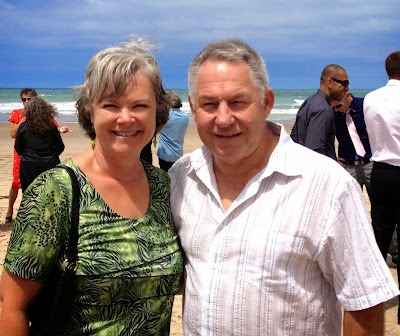 Barry (Teutenberg) was born in Gisborne on the east coast of the North Island of New Zealand in 1955, living there all his life apart from 6 months in 1976 when he travelled to England with some friends and initially caught the 'boating bug' after spotting barges on the Norfolk Broads.

He ran a successful photography business for 35 years before selling it in 2008 to pursue his dream of travelling the waterways of Britain by narrowboat.  Having spent many years photographing weddings, schools, family portraits and commercial work, Barry loved nothing better than capturing the beauty of the canals and places along the way, taking the majority of the photos for the blog during 2009 and 2010.  In 2011 Barry opened up a 'Homebrew and more' shop in Gisborne, New Zealand, using his extensive knowledge and experience to interact with his customers!  Barry sold the shop in September 2013.

Sandra (Walsh) was born at home in Shirley, Solihull, in 1959 and is a qualified nurse and midwife, having practised nursing and midwifery in a variety of roles and places for 35 years.  She fulfilled a long-held dream and immigrated to New Zealand in January 2005, meeting Barry in January 2006 who subsequently persuaded her to return to England in 2009 to buy a narrowboat!  Sandra's had articles published in nursing and midwifery publications, the Reader's Digest, and the Gisborne Herald, and is the author of the words of the blog posts.
Barry and Sandra married in England on the roof of their narrowboat 'Northern Pride' in September, and back in New Zealand on the beach in December 2009.  Sandra chose to retain her maiden name and vice versa!  Barry and Sandra have four grown-up children between them, and two gorgeous grandsons in England.

In 2009 and 2010, Barry and Sandra travelled almost 2,000 miles on the waterways of England and Wales, following which they put their beloved Northern Pride on sale.

Barry and Sandra returned to England on 20th March 2013 and purchased another narrowboat called 'AREandARE'.  She's 60' 2" long, with room for family and friends to come and visit, as well as space for Sandra and Barry to run their businesses.
This blog continues via the Wordpress website they set up in 2014 - https://barryandsandra.com
In February 2020, Barry finally gained British Naturalisation to proudly become a UK citizen.