We hope everyone has had a fabulous xmas and is looking forward to 2012.  It’s been a chilled one for us, Barry is on his third day off, and we’ve had his children Jamie and Tom staying.  Luckily the sun’s finally decided to come out, we’ve had more than our fair share of wet and cold weather recently – most unusual for Gisborne!

It’s a challenge for us to find something UK waterways related on our blogs during this time when we’re away, but we had a lovely surprise on xmas eve, as a friend of mine from work bought us the xmas card below … 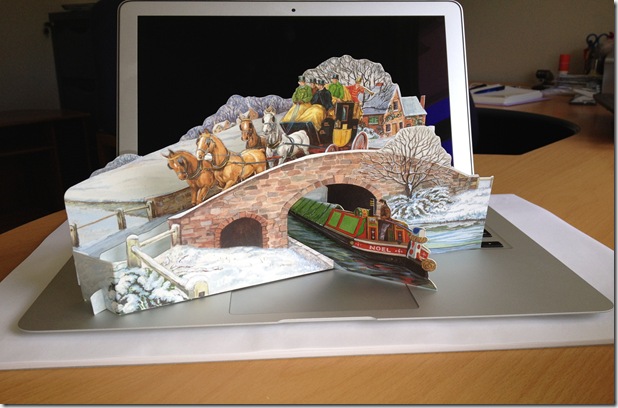 A ‘pop-up’ xmas card – found in a shop in Gisborne would you believe?

The card is sitting on top of my gorgeous new Macbook Air – I adore it, though am still rather clueless as to how to use it completely, so am currently sticking with my old desk top until I feel more confident!  It’s fantastic for Skype-ing for my Life Coaching course, and it’ll be an amazing tool once we’re back on the canals as I’ll do a lot of on-line work, so it was my treat to myself.

To pay for it, we’re renting our house out and we’re in the middle of sorting out and cleaning ready for the first group of people to move in for five nights from tomorrow.  We have the same people renting this year as last year, caterer’s at Rhythm and Vines, the New Year’s Eve festival here in Gisborne which is in its 9th year and winner of the 2010 Best Festival/Event NZ Tourism Award, is reported to be “the pinnacle of the best festival week offered anywhere in New Zealand.”  Our usual population is around 35,000, and there’s 30,000 tickets for R & V – and they’re likely to be sold out – so you can imagine how packed Gisborne becomes at this time of year, along with xmas holiday makers from around new Zealand.

So we’re off to the beach … 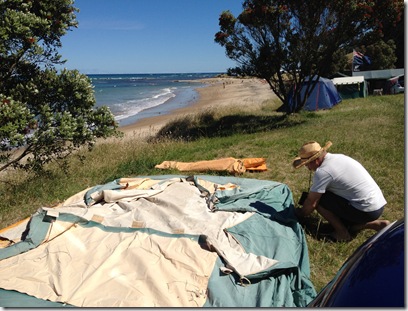 Barry putting the tent up – it’s a VERY old one, and we’ll be lucky if it survives the next few weeks intact! 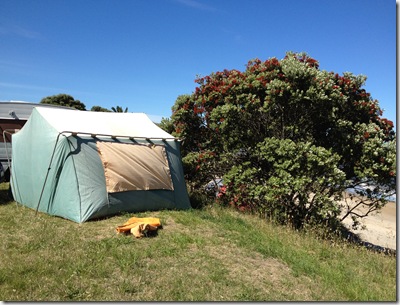 Here’s the tent erected – just a stone’s throw from the beach, and right next to a Pohutakawa tree … 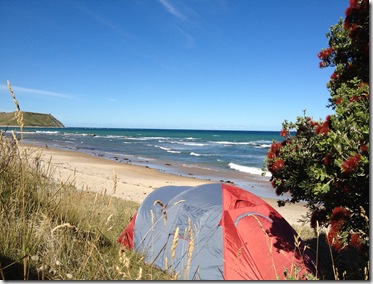 … and check out the view from the front of our temporary home – what could be better? 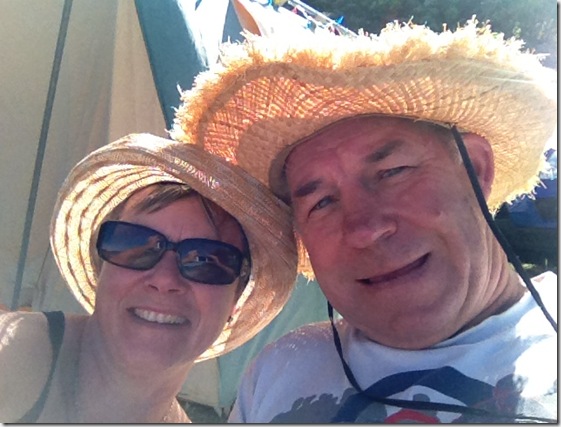 Tent’s up, it must be time for a drink!

We’ve had a great year, it’s flown by, and so many lovely things have happened.  Barry’s shop continues to be extremely popular and I’m almost half way through my Life Coaching Diploma, we have a gorgeous new grandson who we see regularly on Skype, and our family on both sides of the world are healthy.

So it’s happy 2012 to all of our readers, and we hope to catch up with some of you when we’re back in March.  Have a fun, but safe, New Year, and may you reach for the stars and achieve some of your dreams next year.  We’ll have a lot to do on our journey back to the waterways of UK by February 2013, so it’ll be a productive time, and I also want to see as much as I can of the Southern Hemisphere before we return to my homeland, so it’s very exciting!

Since our last posting, Barry has had his 56th birthday (6 December) and we had a few days away in the beautiful Coromandel Peninsula as I’d been in Auckland for the weekend on my Life Coaching Diploma.  I’d already booked the accommodation and his air fare before he opened up the shop, and we have a very competent friend who looked after 'ezimade' while he was away.  I know how challenging it can be for self-employed business people to take time off (having lived with Barry when he had his photography business when he hardly ever had a holiday) and I don’t want Barry to go down that road again, especially after he’s tasted three years of not a lot of employment!  It’s gone from the sublime to the ridiculous lately, but that’s OK, it’ll settle down and we’ll adjust.

We drove up the west coast of the peninsula, which hugs the coast most of the way so you’re almost driving on the golden beaches which are lined with Pohutakawa trees (NZ xmas trees), though sadly only a handful of them were in bloom. It’s one of my favourite places in New Zealand, having visited  many times with visiting family, but Barry has only visited a couple of places, briefly, many years ago – so I showed the kiwi some of his own country, just like he showed me some of mine when we were on the canals.

It’s tragic isn’t it that we often fail to see what’s in ‘our own back yard’.  “What is this life if, full of care, we have no time to stand and stare?’  At this point I’ll apologise for the quality of the following photos – taken with my new ‘iphone 4s’, but by me rather than Barry so they’re not up to the usual standard despite it being a fantastic camera! 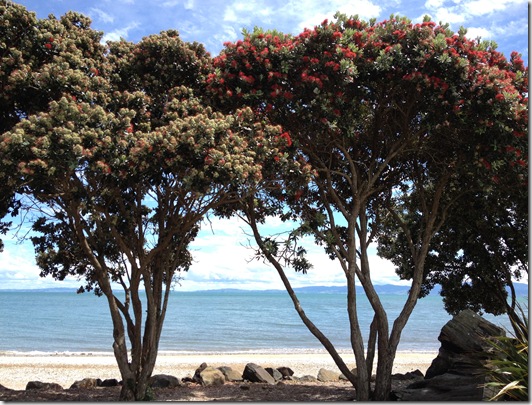 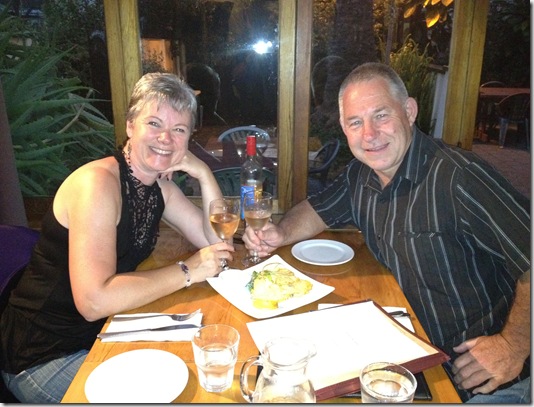 On Barry’s birthday we went to the 'Driving Creek Railway', built in the bush by Barry Brickell over a period of years, and then drove along the '309 road' which is 22 km of winding gravel road that cuts across the Coromandel Peninsula from west to east and has a few attractions along the way.  The second one I’d been to three times before, but it was Barry’s first time.  When I said we were going to a water park, he thought I meant slides and pools – ha!  Little did he know what fun he’d have … 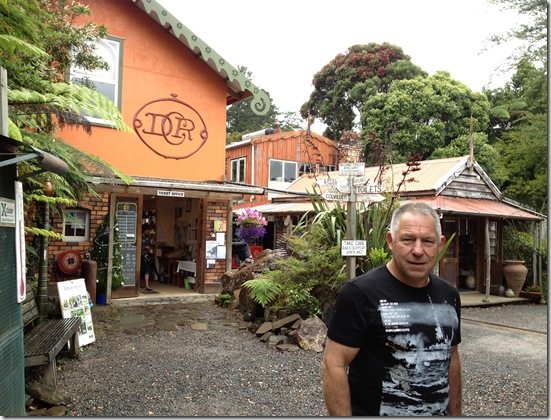 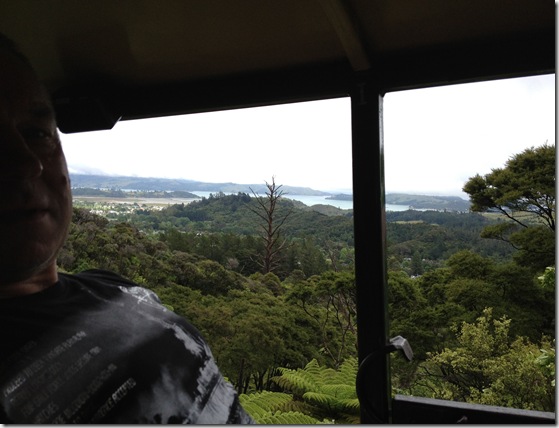 At the Driving Creek railway station and in the train, high in the bush, overlooking the Coromandel 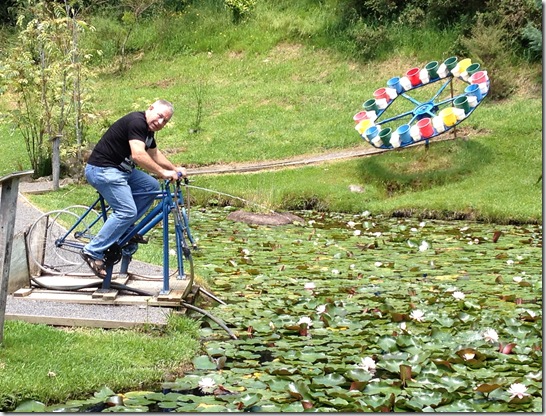 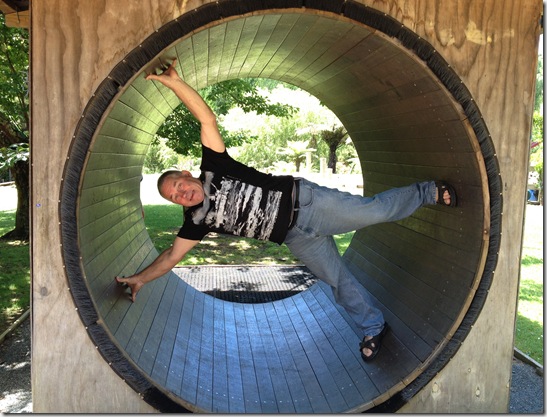 After the water park, it was a visit to the waterfall, book into the accommodation at Hot Water Beach, and a quick walk to Cathedral Cove – sadly there’s been some rock falls here so it’s cordoned off (no that it stops most people!) 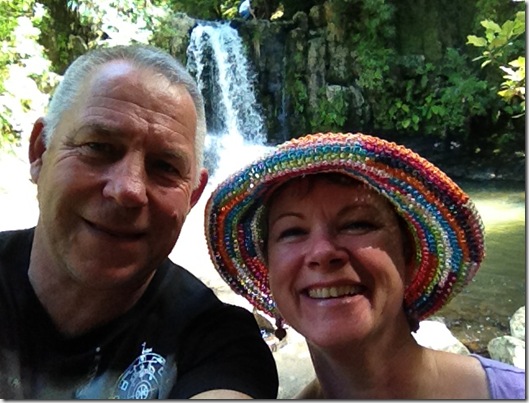 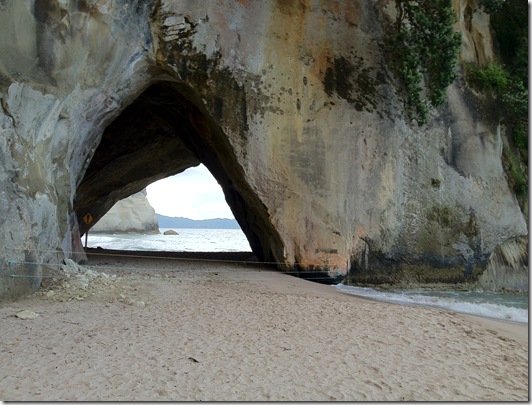 Sadly the tide never went out at Hot Water Beach, so we didn’t get to dig a hot pool, despite waiting around with our spades for almost two hours!  Ah well, we’ll have to go back one day …

The time away together was far too short, and it was soon back to the shop for Barry – not that he minded!  He’s loving the new opportunity and has been unbelievably busy since he opened.  New Zealand is one of only three countries in the world where it’s legal to brew your own spirits, and it seems that having somewhere with the equipment for spirits, as well as beer, wine, cider and cheese and yoghurt making, is a very popular place to frequent in Gisborne.  He’s even just been featured on the front page of the national home brewer’s magazine … 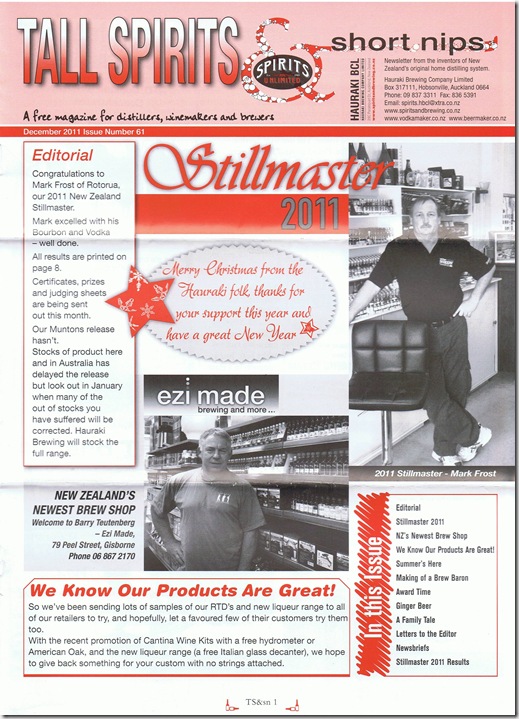 But don’t worry, despite  his success his main aim is returning to the waterways of Britain early in 2013, all of the things we’re doing here in New Zealand in the meantime are working towards that goal.