The story of stuff

As we work through our 'to do before we go' plan, we become more aware daily of one of the big adjustments we'll be making once again living aboard Northern Pride - there's very little space for 'stuff'.  We seem to accumulate more depending on the size of our home, but I know that we're perfectly able to manage with very little.  A friend told me about a 'you tube' video called 'The Story of Stuff' which I checked out yesterday, rather long at over 20 minutes, but it reiterates the things I've been talking about and have felt for many years - there are far too many people in the world working harder and harder to buy more and more stuff that they don't have time to appreciate because they're working so hard!  When they get in from work they're so tired that all they can do is slump in front of the TV where they get bombarded with adverts telling them what they must have so on their days off they shop and buy more stuff they don't need so then they have to work harder, etc, etc.

Apparently this phenomena can be linked to the end of the second World War when, to 'ramp up' the economy, the American government set about making goods that were not designed to last - what is known as a 'planned obsolescence' - they planned  to make goods that would not last.  There's also now a 'perceived' obsolescence whereby people pressure each other to have the latest phone, computer, car, fashion, etc.  One of the reasons I love living in Gisborne is because for the majority of people, having the latest of anything is NOT a priority.  We don't follow fashion, cars are owned until they don't pass their Warrant of Fitness rather than having to have a new model every two years, most people keep their mobile phone until it breaks, not until a better model comes out and so on.  As soon as I get back to UK I notice the stark difference and it scares me because I so don't want to get caught in the trap again - so many people there seem to have been brainwashed to believe that if they don't have the latest whatever, they have less value than their mate who has just got the best, most up to date gadget phone/computer/ipod/house/car, etc, etc.  I hate it!  It makes me feel as though I'm suffocating by the banality of it all and I want to scream at everyone - STOP!!!!  You really don't need that, you could stop working so hard and have more leisure time with your family and friends if you just stopped buying so much bloody stuff!

There's a great web site linked to the story, it's a little American but apart from that it's very thought provoking and I recommend you watch it at least twice to really appreciate it.

On a similar vein, Captain Ahab's wife hijacked his blog the other day to ask whether boaters are using biodegradable substances to clean their body parts and clothes as anything used on board is drained into the canal.  It would be interesting to take a poll and see what percentage actually do consider the environment and how easy it is to find such goods to use.  However, I also see that Halfie has suggested that all products now have to conform to environmentally friendly status so all we're doing is paying a lot more for ones that say they're better - hmmm, it's a tricky one ...

As to working too much, at the moment Barry and I really are like ships passing in the night, or at any time really!  He's on his 13th day in a row now and I'm on my first day off for 7 days.  I'm then working two nights tomorrow and Tuesday.  We don't have time to buy much 'stuff', nor is that the purpose for our current mindless working pattern, but we're certainly looking forward to having time to DO stuff and spend time with family and friends in UK in just over four weeks time!

On Friday I flew to Auckland with a new graduate midwife I've been mentoring since we returned to NZ, for her 'Midwifery Standards Review'.  As we live in such a small,isolated place, we usually have to travel out of Gisborne for anything; very few people deign to venture here to meet us.  But that's OK, we had a cool day out and managed to take a ferry ride across Auckland harbour to Devonport for brunch - my first boat trip since leaving Northern Pride in October last year! 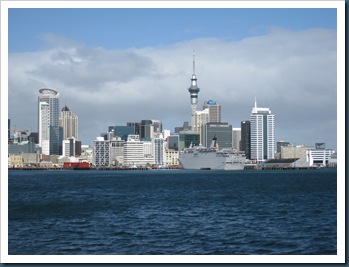 I love the Auckland skyline with the Skytower dominating the view - it's taller than the Eiffel Tower and has a revolving restaurant towards the top.

There was a large P & O cruise ship in port looking almost as big as the high rise buildings!

We were stoked to see a photo of Northern Pride on 4Evermoore's blog last Tuesday as they passed her on the mooring in Ammington, Tamworth.  I'm so looking forward to having time to smell the roses once again.  Thirty sleeps to go ...

Who wants to win the lottery???

Continuing on with the theme of life being about so much more than money, there was a story in 'The Gisborne Herald' recently about a kiwi living in Australia who is 'battling' for his share of a $17 million lottery win.  Along with two friends, he'd purchased a lottery ticket in July 2008 by pooling their money at an impromptu party which won this huge sum of money.  What a life changing experience that could be - divide it equally and live in comfort without having to worry about money again.  But oh no, greed took over and rather than improving their lives beyond measure it has changed them irrevocably.  They've been in dispute ever since about who's entitled to what, and have spent $2 million so far in legal fees alone.  They had been friends for over 20 years and now no longer speak to each other.  Most of the money has been frozen awaiting a trial date on April 19.

The article records other lottery 'disasters':

Money definitely makes the world go round, but it's also 'the root of all evil' as they say.

Six weeks from today we'll be on our way back to the northern hemisphere to rejoin Northern Pride and travel the canals of the south of England.  We leave Gisborne at 0630hrs on Tuesday 18th May (oh so early, but the cheapest flight!) and have about four hours in Air New Zealand's 'Koru Club' lounge in Auckland airport (free food, drinks, TV and papers, etc) prior to our flight to Sydney to stay a few days with Barry's brother.  We have the two passes to the Koru Club because Barry travelled from here to England and return twice last year, so got upgraded to silver card status!  It'll be my first time in Australia, so I'm excited about seeing what's on offer 'across the ditch' as they say here.

We leave Sydney on Sunday 23rd May and arrive in Birmingham at lunchtime on Monday 24th May.  We'll go to my parents house in Ombersley for a couple of days initially before returning to Ammington and our boat around 26th May.  My dad celebrated his 90th birthday last week - how amazing is that?

In the meantime we're doing the necessary planning for another extended period of time not earning a salary.  We've produced a financial spreadsheet of approximate costs, being better informed this time of how expensive or cheap (depending on how you perceive it!) living on a narrowboat can be, with experience from our travels last year.  Unfortunately, despite working full time and saving hard, we'll still need to borrow some money in order to make the trip possible.  This scares my 'sensible' side at times, but I mostly manage to rationalise it as we've no mortgage on our house here and own Northern Pride outright, so we know we won't get deeply into debt and of course have our house rented while we're away.  As I get older, I'm also very much of the 'seize the day' attitude, when the reality of my mortality kicks in with a vengeance - you just never know what's round the next corner ...

We realise we're unlikely to ever be 'rich' in monetary terms, and don't aspire to such heights (though wouldn't turn it down if attainable!), but believe we're blessed in other more important ways and want to make the most of 'living' without the main focus being on earning more and more money to buy 'stuff' that we don't need.  I recently read a book called 'The elegance of the hedgehog' (stop now if you're reading this or plan to in the future!) where at the end of the book the main character, a poor but extremely intelligent 54 year old concierge in a Parisian apartment block,  unexpectedly dies in an accident just when she meets her (very rich) soulmate who enables her to let go of the past and finally accept that she's as good as any 'wealthy' person - how ironic is that?  I also tried to read 'The girl with the dragon tattoo' by Stieg Larsson (sorry Captain Ahab, I know you loved it, but it's just not my 'type' of book - I may revisit it!) and was saddened to discover that he'd written a trilogy of three books that are now bestsellers, but he died shortly after submitting his manuscripts!  Shame!  He must've spent his final years doing nothing but writing and never lived to discover how much people would love his work.  Why not just write one book, then live a little before the next one?  Such a waste, yet another note to self.

So we're not waiting until we've saved up enough money to retire before we do the things we want to do, we're coming back to England to live on our narrowboat once again for at least five months, maybe longer, depending on whether we find a way to earn a few more pounds to make it possible, and we plan to truly live and appreciate every single moment of it  ...