There's one thing you can be sure of when you manage a project - there will be variances from the original plan!  Having finally managed to brainstorm all the jobs we'll need to accomplish prior to returning to the canals in 2013, including those things you do to make your house more saleable, yesterday we discovered a blocked drain from the kitchen sink (and horror of horrors, dishwasher!). The plumber hasn't yet discovered where the blockage is from, but we're suspecting it could be a rather large bill and not one we've budgeted for.


However, that's just money and 'stuff' that has to be done.  What's much worse now is that Barry's mum is poorly (more so than ever before), and in hospital, almost certainly she had a stroke on Sunday morning, and all we can do is take it a day at a time as to what the future holds for her.  Just two months ago she bought herself a brand new car (she felt sorry for Barry when I was working away and he was travelling the ten minutes to work by bike, so gave him her 'old' car, bless her!), was playing golf, and going to line dancing each week - at an incredible 88 years of age.  Her mother lived until she was 103, so she'll be most disappointed if she doesn't manage the same or a similar achievement.  Last December she travelled by herself to Australia, to visit her youngest son and daughter, so to now see her so unwell is heartbreaking.

It's also been unseasonably cold here in Gisborne, which doesn't help matters, but the shortest day is tomorrow and it's also Matariki here in New Zealand, which is the Maori New Year and the name of a group of stars known as Pleiades star cluster or 'The Seven Sisters'.  It seems logical that we should be looking at a New Year when the nights are long and winter is well and truly upon us - the same time of year that it is celebrated in the northern hemisphere.

So we get to consider New Year's resolutions twice in this beautiful country.  Mine will be around trusting the universe that all that's happening is as it's meant to be, that I be mindful of how easily I can become passionate about midwifery work to the detriment of other, more important things in my life (i.e. people such myself and Barry!), and to not be afraid of the challenges and changes which we'll be facing over the next year as we begin the enormous changes necessary to move from one hemisphere to the other.

We are greatly inspired by so many lovely people who contacted us when we were enjoying the canals aboard Northern Pride in 2009 and 2010, and have completed or almost completed the journey before us as a long-term prospect - Tom and Jan from narrowboat Waiouru who have had to overcome so many hurdles on their road to the cut from Australia last year, Paul and Elaine from NB The Manly Ferry (aka Narrowboat Caxton) who got to England this year from Manly (who we had the pleasure of visiting there twice) and of course Elly and Mick from NB 'yet to be determined', who sadly I read are also experiencing the challenge of a sick mum as they are almost ready to travel to the UK - our hearts and hope are with you.

Getting to grips with self-employment and Barry’s visa application …

Every year it seems that time moves by more quickly – we're already almost half way though 2012 and it doesn’t seem that long since the New Year!  In just over a week it’ll be the shortest day and longest night here in the Southern Hemisphere – which is good news for us as it means our days will then become longer - possibly not so good for those of you reading from the Northern hemisphere, where you seem to have sadly lost your summer weather once again.

Last time I wrote I'd recently taken on my new role as project coordinator for the maternity quality and safety programme in Gisborne, and it's been full-on for the past 6 weeks..  I know that if I continue in this role until we return to England, it's definitely going to be one that that takes up a considerable proportion of my time.

My concern here, as I know is an issue for many people, is around maintaining a good work/life balance and not allowing one aspect to ‘take over’ in my passion to fulfil my obligations to the maternity services here by taking on the role.  The plan had been to concentrate more on my Life Coaching this year, whilst getting our house ready to sell and de-cluttering our enormous array of ‘stuff’ that we have both managed to acquire.  The Life Coaching is still incredibly important to me, as it's how I intend to earn a modest income when we return to UK, and I shall make time to complete my diploma and see lots of lovely clients for my case study hours as well as those who continue on a maintenance basis - and fit in some fun things too, like going to Samoa for a week in August and two of my sisters coming for a three week holiday in November!  So it's not all work and no play ...

On another positive side, the project post is on a contractual basis, so I’m paid an hourly rate, which was the only way I could work it in with my other commitments (as is my locum midwifery post at Te Puia Springs), so I’m having to get to grips with the concept of self-employment for the first time in my life – it’s certainly different to someone just paying you a salary, having deducted whatever needs to be taken out and then you can spend your money however you wish!  Now I’m learning how to invoice, whether or not I need to be GST registered (similar to VAT in UK), what receipts I have to keep and what spending I have to keep account of, a log book for my car journeys and a monthly ‘cash book’ that I must keep to give to the accountant at the end of the year, if not before.  It feels like keeping accounts is a part time job in itself!

Last week I finally managed to overcome my (irrational?) fear of visiting an accountant – taking the easy option and going to Barry’s longstanding firm, and bless him he came with me to give in his end of year books so I had his hand to hold!  Now I just have to do the paperwork for last year’s income I earned that wasn’t taxed, from being a midwifery mentor, hiring TENS machines, renting our house out as a holiday home, and Life Coaching.

The great thing is that when we come back onto the British canal system in 2013, I'll be so au fait with self employment that I won’t be in the least fazed by then working out how to do my accounting in another country – or at least that’s the plan!

Barry's downloaded the visa application for his UK residency, and he’ll be working on completing that and probably visiting the Embassy in Wellington in the next few months. He was stumped on the first question “What date do you arrive in the UK?”!!!  So it looks like we’ll need to bite the bullet and book our tickets well in advance, before we even put the house on the market, and then we'll have a date to work our ‘project plan’ on – seeing the vision and working backwards to break it all down into manageable steps and prevent it all feeling so overwhelming.

In the meantime, here's a few photos Barry took while we were there in March: 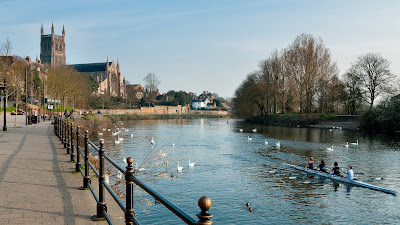 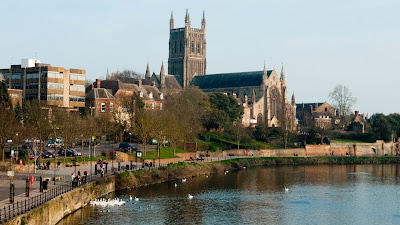 Swanning about on The River severn, Worcester 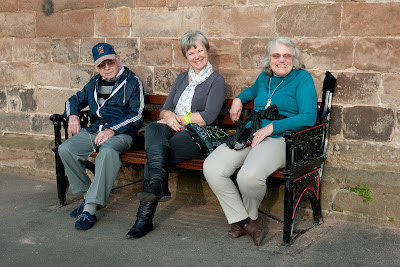 Sandra (with a bit of M & S shopping!) and her mum and dad 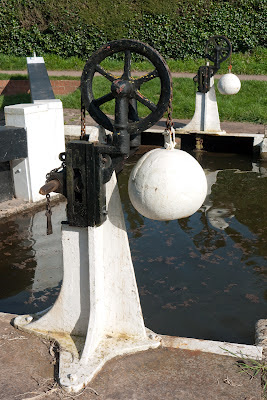 An unusual lock paddle pulley system at Maunsel Lock, on the Bridgewater  and Taunton Canal

We're hoping to book tickets to arrive towards the end of March 2013, before my mum’s 80th birthday on 24th, so we have a nine-month gestation period to grow our dream baby!

Watch this space …
Posted by Barry and Sandra 3 comments: