“The Unknown is scary, the Unknown can also be exciting. Your life could change in an instant anytime. But sometimes, that change is the best thing that will ever happen to you. Maybe I don’t have to know what my fate is to know that everything will be okay. Maybe the not knowing is how we move forward. Wherever I’m headed, I know it’s exactly where I’m supposed to be.” ~ Susane Colasanti


Well it's less than three weeks to go now before we fly to England for the next exciting chapter in our lives!  Lots of things are moving, one is stubbornly staying the same ...

Selling ezimade seemed like it was going to be easy from the moment Barry opened the shop. He had a list of people who came in saying how amazing it was and how much they'd considered doing just what he had but not quite had the courage/got round to it, and would be interested in buying the business once he was ready to sell.

A few of these people have been in and talked about buying, but to date no-one has made an offer or made any sort of commitment. Why not?  It's such a great business, and is growing daily, I can't figure out where the blockage is. Barry has now listed it on Trade Me - so check it out and if you know anyone interested get them to call him asap! He did call a Real Estate Agent last week and met up with him - but was unconvinced that they would be committed enough or work hard enough to earn the ridiculous sum of money in commission they charge for selling a business.

It's OK, we have someone who will manage the shop once we leave if it's not sold, so we're not panicking, but it would be so much better to be able to let it go and move forward. However, Barry has to return to NZ in August anyway to apply for his visa, so maybe he's meant to come back and sell it then?

In the meantime, we've had another garage/yard sale:

This one wasn't quite as successful as the first one, but a lot of the same people came. Additionally, during the afternoon I discovered that someone had 'walked away' with a set of golf clubs that had been at the back of the house - Barry's mum's. I was initially angry that someone would do such a thing, then realised that it wouldn't help anything by giving my energy to that, and turning it around saw that whoever took them must be pretty desperate to have to steal from someone else, so it actually made me feel very lucky - so thank you thief!

The weekend before this, we had the auction for Barry's photography. It was such a fun afternoon, and all but I think two of his pictures sold to the people that came, and a few telephone bidders. Since then so many people who didn't manage to come for a variety of reasons have said how much they wish they had, and those who bought his pictures keep saying how much they love them. So it's all good, Barry will be remembered in Gisborne for a long time to come - and he saw how much people value his work as it was converted into cash.

Our furniture is slowly moving out of the house, bit by bit, and with the photos gone too it's starting to look empty and we are 'letting go' of it, feeling grateful we've lived somewhere so amazing even for a short time, and looking forward so much to travelling to UK and buying another narrowboat. That's what keeps us going, knowing that we WILL get where we want to be, despite the challenges, and then there will be other lovely journeys to plan and look forward to.

Barry has taken some things to his daughter Jamie in Hamilton and will take some to Tom in Wellington in a couple of weeks. He isn't saying goodbye for ages to them yet, because he knows he'll be back in August and be here until he gets his UK visa. Leaving his mum will be something else to challenge us both though - but we can call her and hopefully Skype her with the help of Barry's brother Ray ...

Of course it's through our struggles that we most grow - if life was simple and easy all the time it would be boring don't you think?
Posted by Barry and Sandra 2 comments: 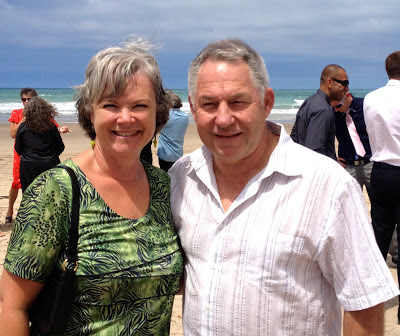 Last Sunday at a friend's beach wedding
Posted by Barry and Sandra 3 comments: