A long way away from eating the dog ...

That may seem to be a rather strange waterways blog title!  I shall explain ...


Last week Barry and I went to see a New Zealand comedian and television personality called Te Radar. He was in Gisborne on his travelling show 'Eating the Dog', which won Best Local Show at the NZ Comedy Festival in 2009, and Best Show at the 2009 NZ Comedy Guild Awards.  What a top notch kiwi bloke he turned out to be!  We had a great evening learning more about New Zealand history, and the story from the title of the show brought much amusement. Thomas Brunner was a 19th-century surveyor who set out from Nelson, along with a number of companions and his beloved dog, to discover more of the South Island.  They travelled a huge distance on foot, over an extended period of time, and were eventually so famished and desperate they had no choice but to eat the dog to survive.  Te Radar is a brilliant story teller, with the upshot of the tale being when you ask someone how they are, they can say "Not so bad, I haven't eaten the dog yet"!  One review of the show states "It is a celebration of the awkward and interesting anecdotes of history that make us who we are: “rogues, morons and scoundrels… pooh-poohing the idea of danger.”

Te Radar was such an unpretentious and friendly person, mingling with the audience and selling raffle tickets, it was well worth every cent - and the delicious food platters and wine were a bonus! 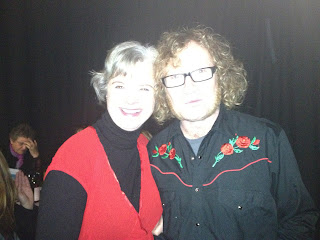 Sandra and Te Radar (not the best photo, I think there was a finger print on my iPhone lens and the flash makes us look a little washed out!  Methinks it's time Barry got his camera out again ...)

A light hearted evening to brighten the wet weather we're still experiencing most days here in Gisborne. Roll on the spring - maybe it's just getting us acclimatised to returning to England next year?

Our bathroom is still not finished, after three months, but the tiling is almost there so possibly by the end of next month we'll have completed it.  It's challenging when Barry works six days a week in the shop, but we're making progress slowly.  The drains were completely blocked by roots from the hedge at the top of the drive, so we've had holes dug three metres deep in the pavement on the road we live in (we live on a hill) and also on our drive, as the council clear the pipes - now we just have to wait and see if we'll be paying for the repairs or no, we didn't dare ask!

Sadly, Barry's mum has been very poorly, and has been in hospital for the past two months.  Tomorrow she is going into a Rest Home - not a pleasant thought when she was doing so well for her age and still playing golf and line dancing in April.  All the more reason to 'seize the day' and focus on achieving our dream ...

My Life Coaching is going well, and I'm completing assignments for my Diploma that need to be handed in at my final weekend of the course early in September.  One of the assignments is an Online Coaching Survey, and I need a minimum of 50 responses.  I  have 18 so far from my Facebook page - so if you can spare me a few minutes, please click on the link and let me know what you would want from online coaching.

Barry hasn't yet applied to renew his passport that runs out next year, and we've not booked our tickets yet, despite intentions to do so, maybe it's the miserable weather that's not motivating us?  I'm going to Samoa on 24th August for a week - yaay,  sunshine!  A reward for completing my assignments - or at least that's the plan!
Posted by Barry and Sandra 4 comments:

So we've had the shortest day and we're now looking forward to spring, but in the meantime the heavens keep opening - I hear it's the same in England so it doesn't feel quite so bad!  It's so damp here at the moment, we've had washing on the line for days and the garden looks like a quagmire!

However, on a rare break in the weather whilst walking up the hill where we live on Sunday, I spotted this gorgeous rainbow heading into 'Poverty Bay', which is the Pakeha name for Gisborne after Captain Cook failed to replenish his supplies when he and his crew landed here in the late eighteen century. 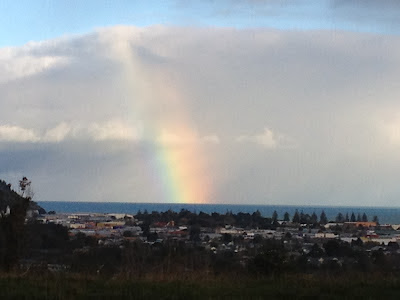 I've now set up a Facebook page for my 'Holistic Life Coaching' business, which is part of my work for the Diploma as I need to survey people on what they would want from 'online coaching' - do take a look and 'like' the page - the survey will be posted in the next couple of weeks and I need at least 50 replies so fingers crossed.  They say that 'what you give energy to grows and expands' so I'm giving as much energy as I can to my life coaching, whilst juggling all sorts of other balls as we continue to work towards our goal of returning to the waterways.

The drain situation is ongoing, it was unblocked but work still needs to be done - ivy roots have invaded the pipes!  The bathroom is slowly getting finished and the tiler should be coming in the next week or two.  We've not booked our flights yet or applied for Barry's passport, but they're on the 'to do' list again this month ...

I wonder if it's the cold, damp and dark weather that stops us from moving forward as much as we plan to?  Roll on lighter brighter days ...

Posted by Barry and Sandra No comments: