We've had a few comments on the blog or via email asking what camera Barry uses to produce his amazing photographs, so I thought we'd post a brief summary of his 'equipment' and the software he uses. 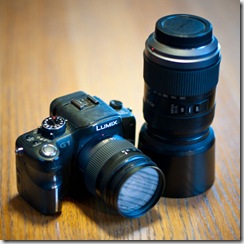 His camera is a Panasonic Lumix G1, purchased just before we came to UK in April 2009, after studying the market and searching for something suitable within our budget.  He doesn't use any filters (though he occasionally did on last year's photos), and has two lenses - one is a (35mm equivalent of) 28-90mm zoom lens, the other is a 90-400mm lens. He prefers to shoot as if it's the final shot, cropping in the camera, choosing the correct angle and exposure, to minimise any work afterwards.

Another software tool he uses is called Nik  - a Nikon software plug-in for Photoshop that he uses to enhance or 'tweek' certain photos, or for creating his black and white images.. 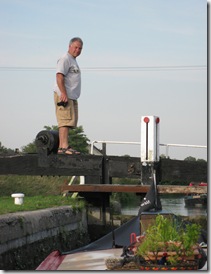 He skips around the locks, towpaths and places along the way holding his camera - often he'll also have a windlass in his hand - I'm not sure how he's so nimble or how he manages not to drop either of them or fall into the canal, but so far so good!  He hates camera straps, bags, etc, and very rarely uses a tripod saying they just get in the way and restrict the freedom of just 'capturing the moment'.

Having spent 35 years as a professional photographer lugging around camera bags, tripods and all sorts of lighting equipment, etc, he says this is like a breath of fresh air.

In response to requests asking what camera he uses, Barry is often heard saying that '... it's not the camera that takes the photo, it's the photographer', so basically anyone can spend a fortune on a camera, it doesn't necessarily mean they're going to be able to produce a good photo.  He has a real eye for a picture opportunity from his years of 'practice'.

And finally, a professional golfer was once told he'd had a lucky round - his response was along the lines of '... you know the funny thing is, the more I practice, the luckier I seem to get", which I think explains it in a nutshell!