After a great night out on Friday at The George Hotel in Lichfield, Barry managed to achieve his canal fix over the weekend, though it was touch and go for a while!  We were meeting up with Andy, aka Captain Ahab, who'd informed us he was somewhere between Tipton and Oldbury.

Without either an A to Z or a GPS, just a road name and a large AA Road Map, it was rather challenging.  I was just about to give up, saying I'd had enough and we'd have to stop somewhere to buy an A to Z, when we spotted Andy at the side of the road - hurrah!  He'd said he was on Dudley Road West, but in fact it turned out to be Dudley Road East - we'd been travelling round and round in circles looking for the west of the east road (!) and been on the way to Sedgely, wherever that is, before turning round! 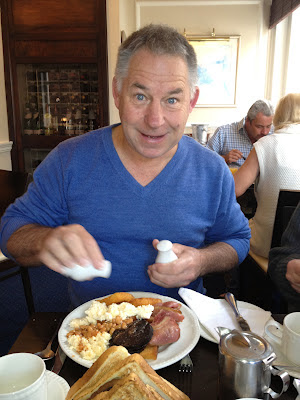 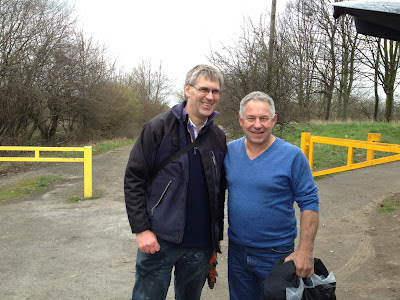 Hurrah!  Finally we found the Captain!

Barry was a bit late for the canal clean-up that was in full swing, but he did manage to pull out a few plastic bags and other random bits and pieces.  Following the work party, he and Captain Ahab and Jeff found their way back to Wand'ring Bark and took a short trip to the pub to celebrate St Patrick's Day, had an overnight stay and then a cruise back to the Marina - Barry would have been in his element.

Collecting him from Whitchurch Rail Station on a sunny Sunday evening, we stopped off at Grindley Brook for a bit of a waterway walkabout ... 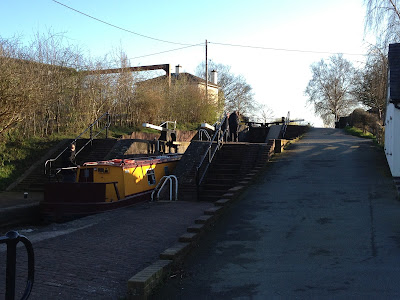 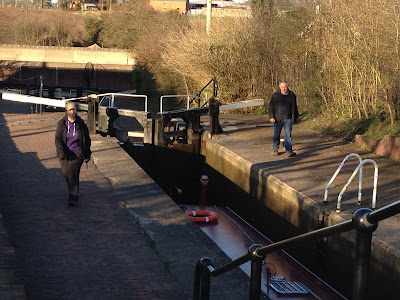 Grindley Brook, a few minutes drive from where my daughter Lisa lives

Tomorrow Barry's catching a train back to Birmingham to meet up with some more friends, Fred and Sara from Sheffield, and Lisa and I will drive back to Ombersley with our adorable grandson. 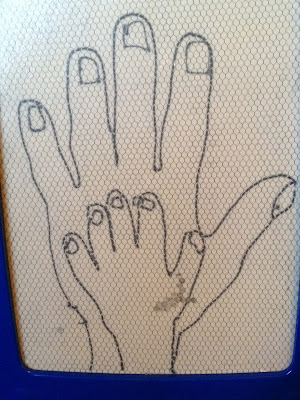 Barry's hand and our grandson's hand etched to compare 56 years, versus 2 years of age!

Only eight days of our trip left, we knew it would fly by and it certainly is, but we're having a fabulous time and it's so uplifting to spend time with my family - and we know that when we return to New Zealand we'll be on the countdown to coming back to live in 12 months time when we won't have to rush around so much either on the canals, or with family and friends.
Posted by Barry and Sandra 2 comments:

We made it back to the motherland for mother's day...

Well here we are once again in England - Barry made the flight to Auckland last Tuesday night, thank goodness.

It’s been 16 months since we were here, so it’s fabulous to be seeing my family again.  So far we’ve stayed with my parents in Ombersley (no photos yet Dijon!), been to Brighton to stay with Kim and Joe, had a brief visit to my sister in Southampton and then back to Ombersley. 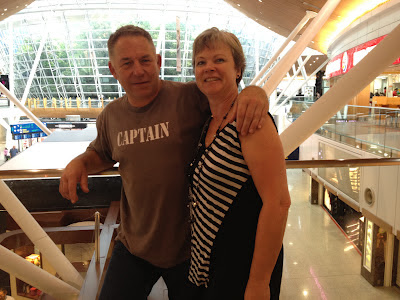 Within a day or two of arriving, Barry had managed to visit the Droitwich Canal, where we had a walk around the basin – we’re looking forward to travelling on this newly opened (in 2011) waterway when we return in 2013 – Barry took a few photos on his camera, so we’ll upload those when we’re back in New Zealand as he doesn’t have his card reader or laptop here.

Barry caught up with a friend in Brighton for a few drinks on Saturday afternoon.  Well when I say a few I may be understating the facts!  He suggested they'd managed to drink about 8 pints of Guinness in the space of a few hours, he really is incorrigible …

Despite that over indulgence, he obediently found his way back to Kim's on time, in the early evening, and we went out with Kim and Joe and a friend of theirs, Joanne, to a night-club in Brighton called ‘Cassablanca’s’ – there was an excellent band on and the girls boogied to the beat while the boys talked boy things and drank beer (I'm so thankful I'm a girl, I think we have so much more fun!). 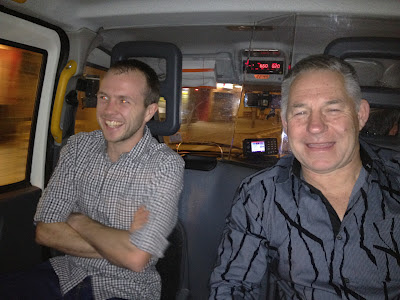 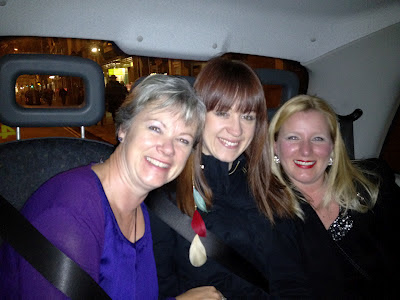 Joe and Barry, Sandra, Kim and Joanne off in a taxi for a big night out

On Wednesday we managed to squeeze in another canal fix for Barry, this time to Stourpourt as I craved some good old British fish 'n chips and curry sauce - yum!  We were just in time to assist a boat through the locks after lunch ... 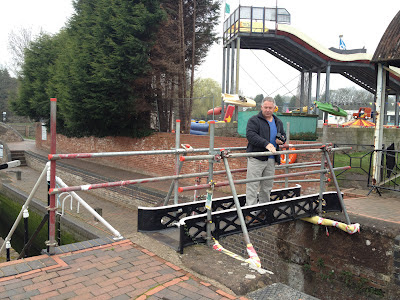 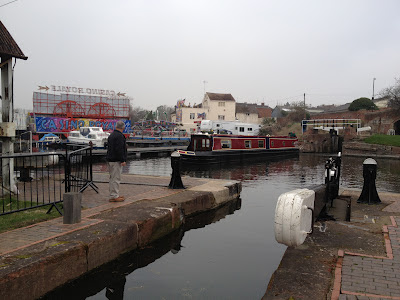 We’re now at Lisa’s and have met our grandson for the first time – hurrah!  At last!  He's the sweetest little boy you could ever wish to meet and adores his Grandad Kiwi - he's had many more cuddles than Grandma Kiwi who's maybe just so much more scary.  We're off again this evening to Lichfield for my sister Kath's partner's 55th birthday party and another live band to dance to, then tomorrow, I'm handing Barry over to Captain Ahab for a weekend of canal cleaning around Tipton and Oldbury, then a night on Wand'ring Bark - he will be in seventh heaven bless him.

I'll be driving back to Malpas, in Cheshire, again to spend Mother's Day with Lisa - her first one ever so it'll be very special.
Posted by Barry and Sandra No comments:

News from the edge of the world (or rather the beginning) ...

On Friday last week I had to travel to Auckland for my eighth 'Diploma in Holistic Life Coaching' weekend, usually about a seven hour drive, through beautiful scenery.  Gisborne is literally on the edge of the world, and is the first place to see the sun each day (well that is until they changed the date-line on 31 December 2011 and Samoa 'lost' a day).  There are only two roads north from Gisborne, one through a gorge which is the shortest route and the other around the East Cape, another three hours at least.  On Friday morning a friend of mine phoned to say that the gorge was closed for a few hours, due to a 'slip' of something onto the road, so I waited a while.  By 12 midday though it was announced on the radio that it would be closed until Sunday - so off I went the long way and arrived in Auckland around 2130hrs - a nine and a half hour drive of around 650kms.  In the early hours of Saturday morning, a massive landslide occurred in the Waioeka Gorge, which has now closed the road for 4 - 6 weeks!  So it's likely it won't even be open when we get back from England - incredible.  How fortunate that it didn't happen when someone was driving past.

It's now Tuesday afternoon and my bags are packed ready to head to Auckland airport this evening around 2200hrs.  Barry is still working in his shop, ezimade, and is scheduled to catch the last flight out of Gisborne at 1840hrs.  Let's hope nothing goes wrong with it as there's no way he'll be able to make it to Auckland by road if he doesn't!

Not many photos at the moment, but here's one from last night - Deb and I went to 'Euro', a restaurant owned by Simon Gault who is a famous NZ chef.  The food was delicious, but expensive, and actually not as amazing as I expected and nowhere near the quality of The Marina Restaurant in Gisborne that we went to recently with our English guests Jean and Jeremy.


We've more or less arranged now to catch up with Captain Ahab and Belle on the weekend of 17th March, so Barry should get his canal and narrowboat 'fix'!   It'll be lovely to see them both again.

We arrive at Heathrow around 1615hrs on Wednesday 7th March, where we'll collect a hire car for the 20 days of our brief visit, and initially drive to my parents in Ombersley.  I'm hoping that the traffic isn't too awful, it always takes a bit of getting used to after the delightful slowness of New Zealand.

We'll stay there for a few days before travelling to Kim's in Brighton on Saturday until the Monday, before heading back to Ombersley for a few more days, then up to Malpas to see Lisa and our gorgeous grandson for the first time in person - we think he may try and put us back into the computer as he's only ever seen us on Skype!

It's coming into autumn here and we'll be arriving in UK to the spring - I'm looking forward to seeing the daffodils and crocus's, as well as my family, and I suspect Barry is looking forward to drinking more English beer - that's if he gets to Auckland on time ...
Posted by Barry and Sandra No comments: