Not a terribly exciting day as much of it's been plagued by torrential rain! Sandra only managed to get herself out of bed at ten to ten (!), and we moved along a few miles to Burton-on-Trent. We did, however, manage to buy some painting materials from the Marina here at Shobnall and Barry had a long chat with the owner about ‘how to paint a narrowboat’. We also found out the cost of getting this done ‘professionally’ – about £110 per foot, i.e. it would cost us around £5,000 to have our boat painted! OMG! Also it would be in dry dock for about 4 weeks. Well that settles it; we’ll be doing whatever needs to be done ourselves. We also bought a cap for the old chimney and brass vent for the old engine exhaust, very smart 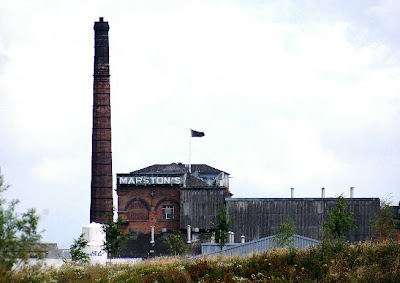 Only two photos today! But both very important.... BEER!

We had to walk into town as we needed to get some forms faxed and sent to New Zealand. However when we discovered it would be £5 per sheet of paper to fax we declined and just posted them. Barry took photos of the forms and has emailed them, all for free! Money is getting tighter, it certainly is the root of all evil … Damn, I’m going to have to go back to work in 14 weeks time! I shudder at the thought of it, I really could get used to this gypsy/nomad lifestyle.

Barry decided to forego the Brewery visit due to the appalling weather - it's enough for me to smell the hops, never mind see them in action, it's revolting! Not sure how anyone can put up with living around here, but I suppose you'd get used to it.
We got completely drenched walking back to the boat, and had a bit of a rest in Wickes where Barry managed to buy a grinder for a fair price. He's now reralised that he'll have to return there tomorrow to get some safety glasses or the sparks are going to cause a problem, let’s hope it isn’t raining too badly again in the morning!

We parked under the pipe that leads from the brewery. Was very tempted to use my new grinder on it!

We’ll be carrying on up to Shardlow tomorrow where we hope to meet up with a NZ midwife colleague’s father, for a pint or two, which will be cool.