True to forecast, the rain has persisted it down heavily today. After a lovely cooked breakfast including bacon, eggs and speciality Yorkshire sausages, we said goodbye for now to mum and dad and went through the lock just after 1230hrs – I had my life-jacket on and the anchor at the ready! Barry got me to practice picking it up a couple of times just in case I needed to throw it in the river; boy it's heavy, my guess would be 15kg (about 3 large babies, being a midwife that's how I judge the weight of things!). It’s a breathtaking drop down from the Selby canal and I’m not looking forward to us driving back into the lock from the tidal Ouse on the return journey! 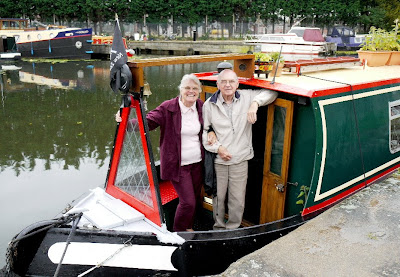 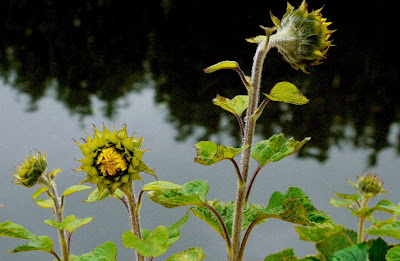 The sunflowers are poking out, but hesitating because of the lack of sun!! 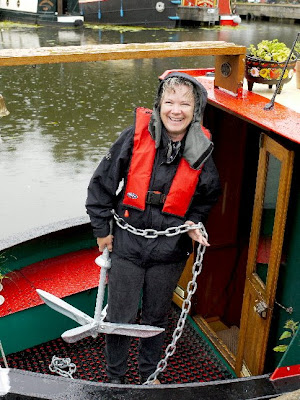 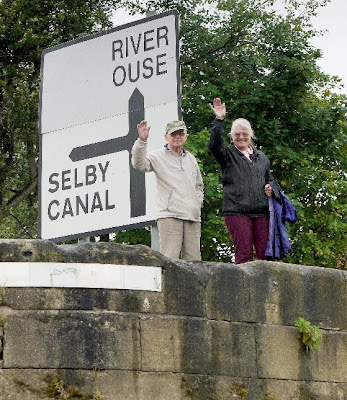 Is that farewell, or au revoir 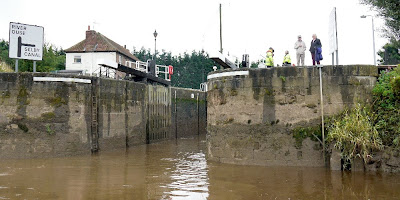 That's what we've got to aim for on the way back

I took the first shift at the helm while Barry tried to load yesterday’s photos onto the blog with limited success. He took over after an hour and a half as I was getting very cold and damp, and we both had some welcoming hot soup.

The swing railway bridge at Selby 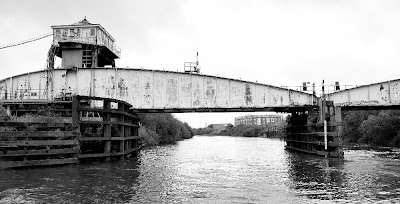 Next is the swing road bridge. Wouldn't want to be caught in a traffic jam on the bridge when they needed to open it!! 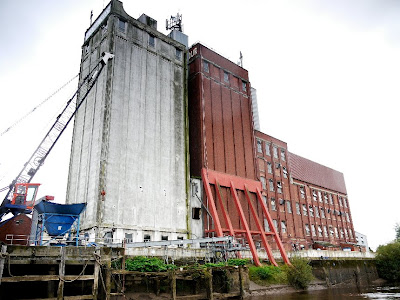 This mill is still working. No 'trouble' here! 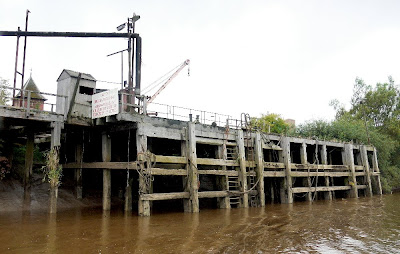 An old wharf on the river

The swing bridge at Cawood on the Ouse. Obviously some of the boats aren't too accurate at getting through with all the protection
.
The Ouse is a large tidal river, with many logs floating down which it's best to avoid if possible! I always think our little boat looks so lost on the big rivers, bless it. We arrived at Naburn lock around 1530 and moored up just on the other side, it was just too wet and cold to continue up to York today! Bloody English summer!! Where did Barry’s promised heatwave go?

The twin locks at Naburn. Weir to the side, we went in the left lock

We did get a few hardy spectators
.

After a wet and chilly day, we had a cosy night in and one of the things we did was to google 'Northern Pride'. We were astounded to find that our blog was 7th in over 4 million possibles for the term. A rather intriguing finding was the 'Northern Pride' is actually held in Newcastle and it is the LGBT (lesbian/gay/bi and trans) annual festival of the north (http://www.northernpride.org.uk/)! Hilarious! Barry thinks we may have hit on a winner - another hit was for the loveboat of 'Lesbilicious - the web's tastiest lesbian magazine' an event organised recently by this organisation for Northern Pride, though unfortunately it was cancelled at short notice for some reason. Check it out on: http://www.lesbilicious.co.uk/loveboat/
.
So does that mean we're more or less likely to sell our boat with such a name? Post your thoughts in the comments box below, or send us an email! 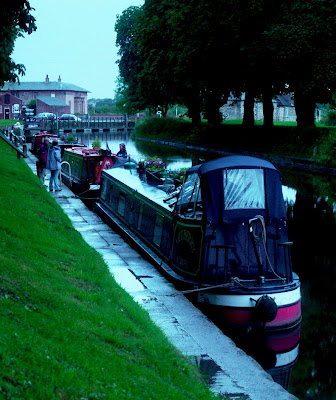 Our mooring this evening - Sandra chats to a Scottish couple who were admiring the boat and wishing they had the money to buy it
.
This evening there was the most spectacular sunset, fingers crossed that it means a sunny day tomorrow ... 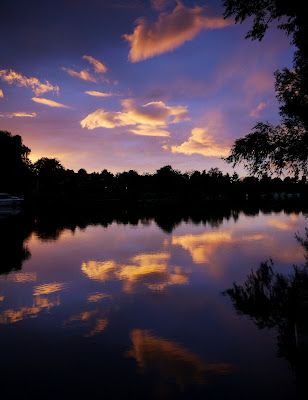 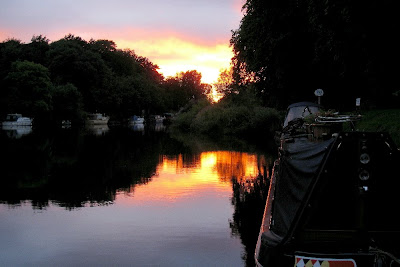