It’s quite amazing how different each canal network is. Moving on up the Stainforth and Keadby Canal, we went through two mechanised locks - so much easier on my poor old back!

The first lock at Thorne with a swing bridge as part of it. You can't open the swing bridge until the lock has got to a certain level

The second one was a huge structure which was previously a double lock, but now only the front one works due to an accident a while ago, or so the skipper of the barge in front of us informed me. 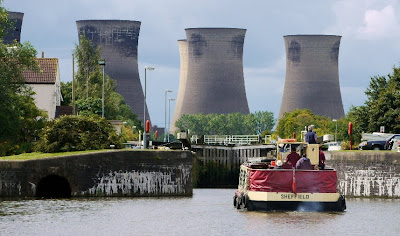 Bramwith Lock is huge, bloody power stations get in everywhere! 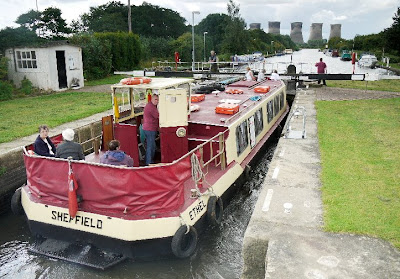 'Ethel' from Sheffield, ferrying around a few elderly folks 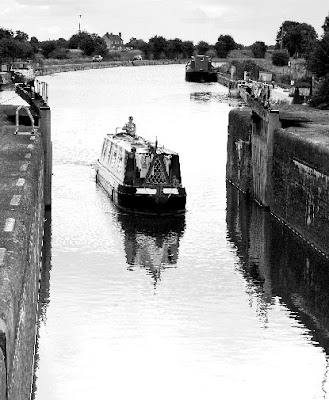 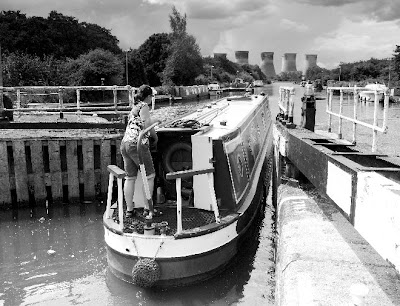 On the way out (note from Sandra, crikey my bum looks big in this!!)

Shortly afterwards, Barry expertly negotiated a sharp right turn which lead us onto the dead straight New Junction Canal which has a plethora of lift and swing bridges. One of them had a manual swing bridge in the centre of a large mechanised lock. There were some incredible sights, real feats of engineering; Barry was well impressed!

At the end is the turnoff to Sheffield on the left, and north to the right 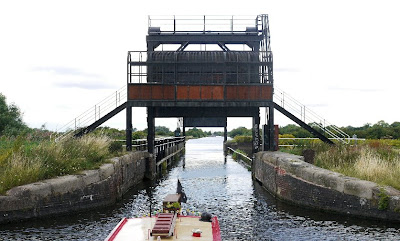 The aquaduct over the River Don.
The guillotine gates at either end are to stop the canal filling up when the river floods 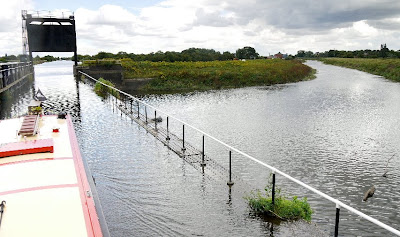 Looks like the canal and river are merged, but there was about a 20 foot drop 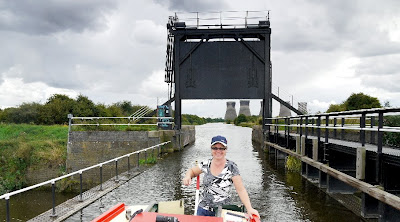 Keeping her head through the first guillotine!! 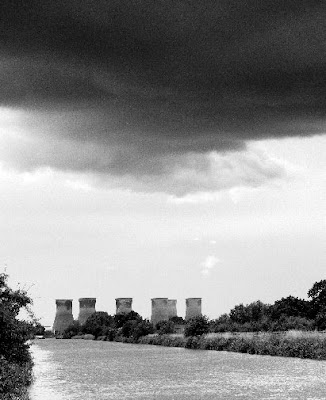 Coincidence - or do the power stations create the weather?!

We weren’t quite so impressed with the BW lock-keeper at Skyehouse Lock and swing bridge, who asked if I was Australian and thought Barry was from South Africa! Goodness me, he knew how to insult us, lol! Except he was deadly serious bless him, no harm intended, very amusing. I think I’m going to have to go to some elocution lessons as people keep thinking I’m an Aussie, when I’m actually English but have lived in New Zealand for over four years! 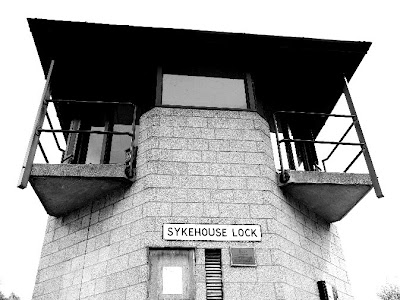 Looks more like a guard house at a 'Psych(iatric)' house than a Sykehouse! 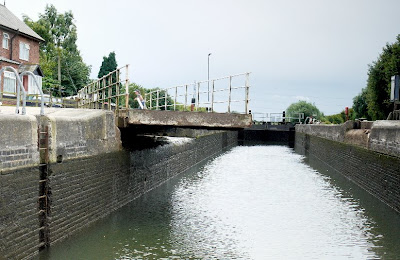 A very complex lock with a swingbridge in the middle
The lock-keeper wasn't in when we began but luckily returned just as Sandra was going to close the swing bridge before the gates at the end which apparantly would've shut down the mechanism! You need a degree in science to work these things!! Very few instructions!

New Junction Canal, a very straight stretch of 5.5 miles
One of the last canals to be constructed in England linking two canal systems 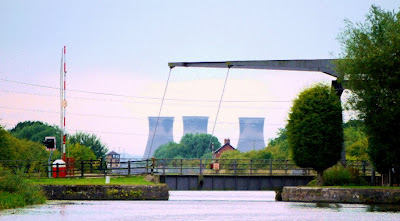 ... and still those damn chimneys are everywhere! 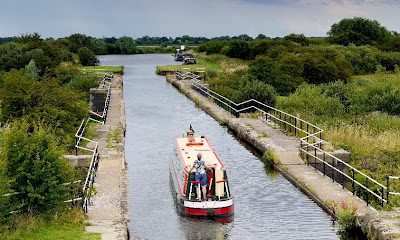 Another aquaduct, this one over the River Went, don't know where it went though! 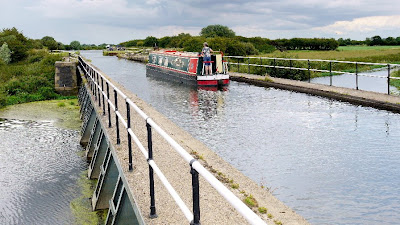 I spent much of the day hand washing our dirty laundry, we've given up trying to find a launderette on the journey. At least it was a blustery and intermittently sunny day, so good drying weather. 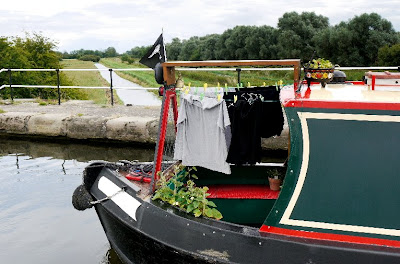 The lock at Pollington, ejecting a huge barge
Wouldn't want to meet that on a blind corner!

We moored up at a little place called Pollington, and spookily enough we were right next to a couple from Tasmania! We went to a quiz night at ‘The King’s Head’ pub up the road, six narrow-boaters (including us) along the moorings, from a variety of places, formed 'The United Nations' team. We did very well - 25 out of 40 and the winners got 27 so it was close! If only we hadn't talked each other out of a few answers that we would've got correct, the usual story!
What a fabulous pub, really friendly and a warm welcome from the landlord/quizmaster. They also brought round free sandwiches and cold black pudding (gross!), and there was a raffle and a cash prize number draw. An excellent evenings entertainment. It was fortunate that we were here on the right night, we’ve arrived at so many places along the way and just missed whatever organised function is on – most frustrating! 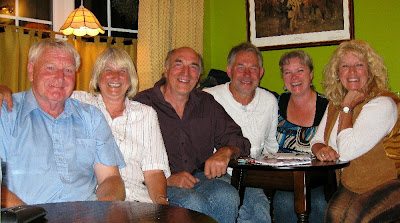 Stuart & Michelle (from Southend, sold their house and live on board permanently though dry dock it in winter),
Mike and Moira (origninally from Somerset and South Wales, lived in Tasmania for many years, been living on board and travelling around England for 2 years now)
Lovely company, thank you!
Post script - a couple of photo's of the boat shortly after the earthquake - whoops I mean after we hit the wall the other day on the Trent!!! 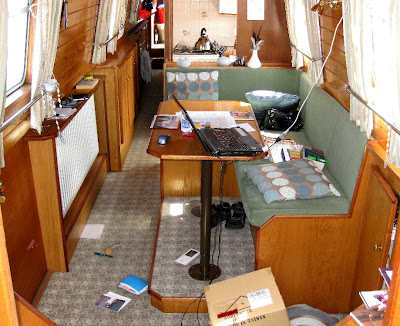 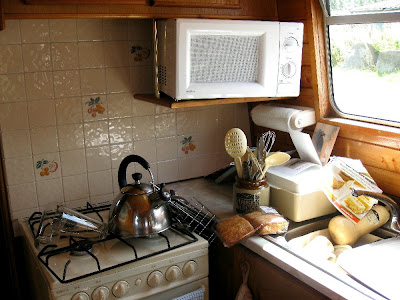 We have a number of visitors coming to see us over the next few weeks. Firstly on Saturday it’s Freddie and Sara, and possibly some or all of their offspring. They stayed and lived in Gisborne ages ago for a year or so, and Barry has kept in touch with them ever since (well Sandra has!). They'll be travelling to us from Sheffield and, depending on what happens, may be with us for a day or the weekend, so that’ll be compact but cool.
Posted by Northern Pride