We said farewell to Jenny and David early this morning and set off towards Selby. Passing back through Knottingley and the industrialisation around here, we turned left onto the River Aire and shared the next three locks with a couple from Stoke-on-Trent who spend six months of the year living on their narrowboat and the remainder of the time in their house. It’s quite enlightening how many people do this, whether their country of residence is England or the Southern Hemisphere, and one day we hope to be able to afford to do it annually too!
The two men worked the locks today, as we were back to manual ones with very heavy gates – but the girls role of driving out of the locks and getting the boys back on board was quite a challenge as well with only tiny pontoons to get to. Still, everyone managed to get through and back on board without any mishaps.
Our route after the River Aire was the Selby Canal – very picturesque, though quite weedy again but not shallow like the Chesterfield so long as you kept to the centre of the waterway. It was also very clear so you could see the bottom for most of the journey which is quite unusual for a canal, because it's fed from a river at each end.
.
The canal-life was spectacular — teeming with tiny, iridescent blue dragonflies, along with the occasional huge brown one mimicking a miniature helicopter. Barry noted some very large fish swimming around, and even saw a terrapin at one stage sitting happily on a piece of wood watching the boats go by! We’d read at West Stockwith Lock that terrapins may be around, as people who’d had them as pets and got fed-up have been putting them into the canals and rivers in the area, and they've survived and thrived! Not such a good thing as they destroy some of the natural habitat of the waterways it seems, though heaven knows how they'll get rid of them now. 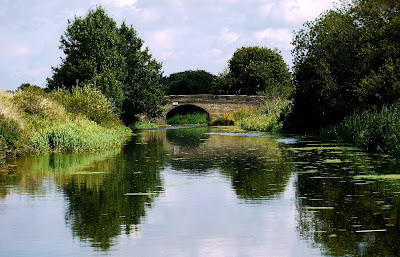 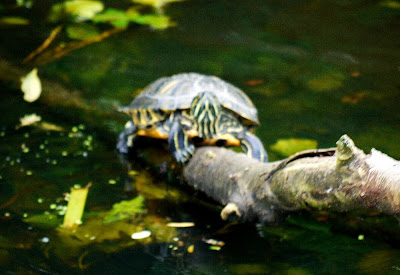 Not the sharpest of photo's, but amazing to see nonetheless!!

Arriving at Selby early afternoon, I went into town to check out the shops while Barry continued grinding on the front of the boat ready for de-rusting and painting. We need to find somewhere suitable for my mum and dad to park their car tomorrow night when come to stay with us. It’s not the poshest of areas around here, so it’s a bit of a worry. We were told that some kids had been untying the mooring ropes of the narrow-boats over the weekend; bless their cotton socks. 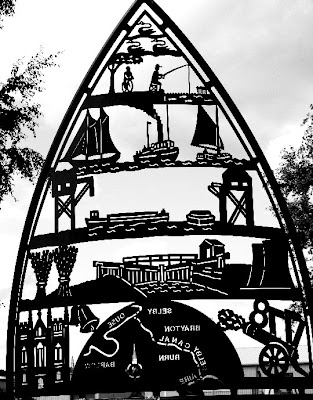 A mirror image of the gateway to Selby on the canal

While I was in town Barry said the lock-keeper came and tried to move on some young lads who were fishing and playing around the nearby swing bridge. They weren’t having any of it and just gave him lots of cheek, so he called the police and the local bobby came along on his bike and moved them along. They’ll probably be back again tomorrow! The likelihood is that their mum and dad are at work and they just have to find things to do with no money so they just hang around looking for mischief, as most young children are want to do given half a chance!

A short time later, the policeman returned and took Barry's name and number (well my number as Barry rarely turns his phone on!) in case he needed a statement at a later date. He'd been round to the boys grandma's home and she'd given him more abuse than the boys! No wonder they're the local trouble-makers, such a shame. He also said that the boys had accused the lock-keeper of hitting them (of course he didn't!). What is this country coming to? There was a poor teacher recently who was driven so crazy by the behaviour of some of his pupils that he actually ran one of them over. One can certainly have sympathy with him. 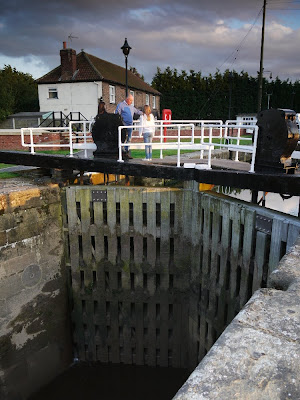 Checking out the humongous lock at Selby - we're going onto the River Ouse soon, another tidal one with a difficult to negotiate lock on the return journey, OMG!!!! 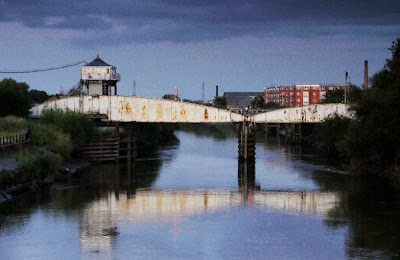 The River Ouse from town - the ancient railway bridge which would have been a swing bridge incredibly enough, but not sure if it still is

Some delightful shots of Selby Abbey at dusk ... 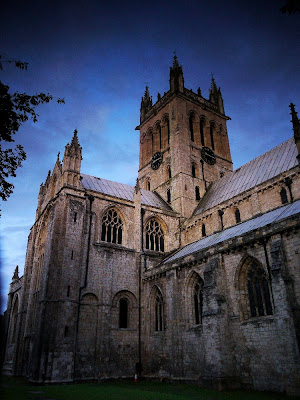 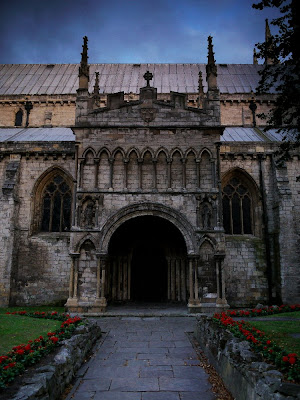 If you look closely above the doorway you'll notice three swan's - Benedict had a vision of these landing on the river and that's why the Benedictine's built the Abbey! (www.selbyabbey.org.uk) 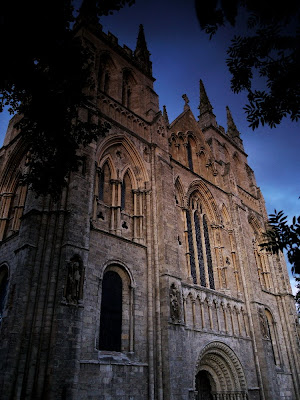 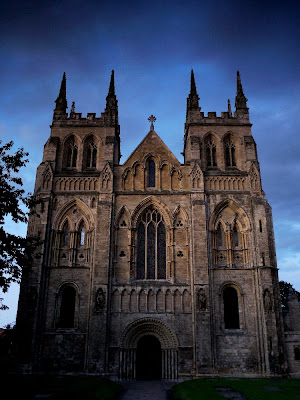 The main street in Selby was quite expansive with a good deal of pubs, though quite a few of them were shut down as is the theme we're finding. Someone told us in Eggborough that 52 pubs across England are closing each week, not sure how accurate that may be but it looks possible from what we've seen. 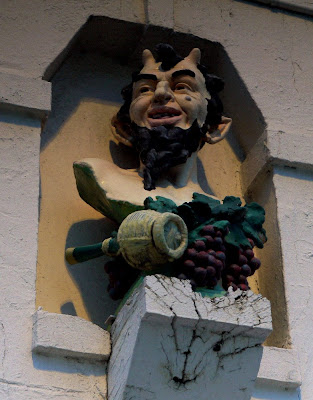 Looks like the jolly Bachus, Greek God of wine, at the Londesborough Arms Hotel in town 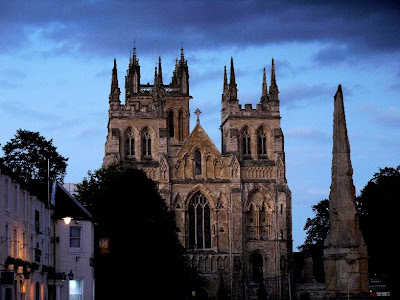 The Abbey from the High Street with a crumbling momumental erection in the foreground! 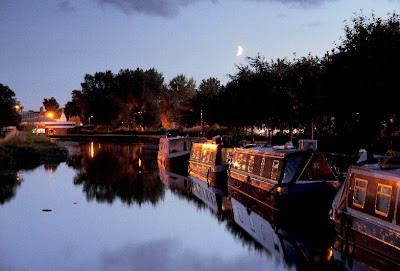 Across the swing bridge from our mooring in Selby, with a dramatic cresent moon - if you look very closely there's a little boy swinging on the bottom corner and a cow jumping over 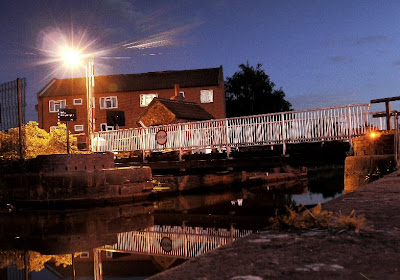 The swing bridge where the little blighters were fishing and causing mayhem!