A slow boat to Retford

Despite our misgivings over the amount of weed in the canal, we decided after some deliberation to take a chance and continue as far as Retford today. It was still a slow process, never more than two miles an hour, but not quite as weedy as yesterday’s journey.

Barry did the driving whilst I worked on my writing correspondence course, which I’ve procrastinated over for the past four years and am only just half way through! I’ll have to pay extra at the end of August to continue it for another 12 months, but I’m determined to complete it, despite my delays. 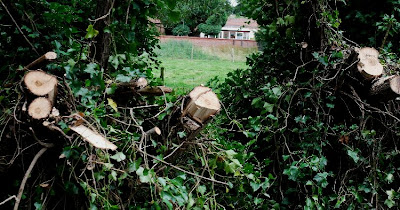 Stumps of trees that must've been cut down after they fell into the canal yesterday, blocking the passage of narrowboats

A farm along the way at Clayworth 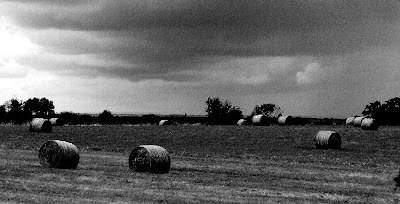 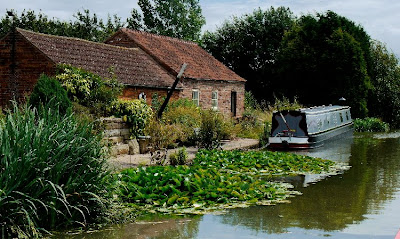 More canal greenery along the way
At lunchtime we stopped at a pleasant spot by a pub called ‘The Gate’; unfortunately it was closed, possibly for good, due to the recession. While sitting there we watched some Mallard ducks preening themselves, having a little low fly and then diving under the water. One right in front of us spent an inordinate amount of time fluffing his feathers and cleaning himself with his bill from front to back. It was a great show! Maybe it’s because we’ve shunned TV whilst on the boat that we can be entertained so simply by a feathered friend! 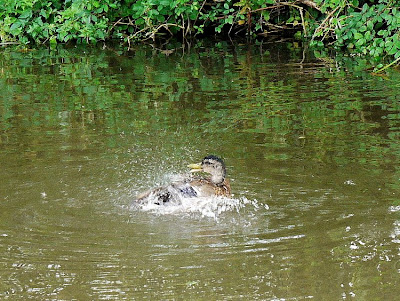 Mr Mallard flapping around during his cleaning dance
Following lunch, Ray and Pauline caught up with us, and we shared a lock with them. Barry got a few shots along with their boat, Carmel Marie, before they continued past Retford. We hope to see them again in New Zealand in 2011 when we can return the favour and have them round for a couple of drinks!

'Carmel Marie' coming out of Whitsunday Pie lock (heaven knows where the lock name comes from!) 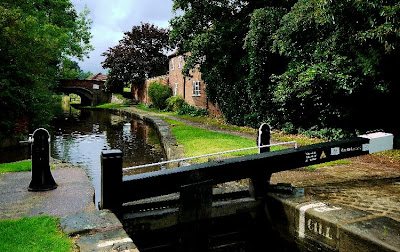 One of the locks at Retford 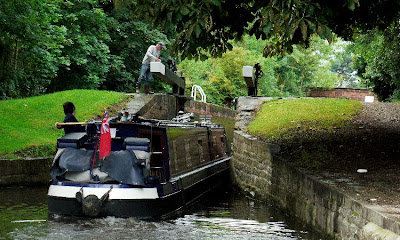 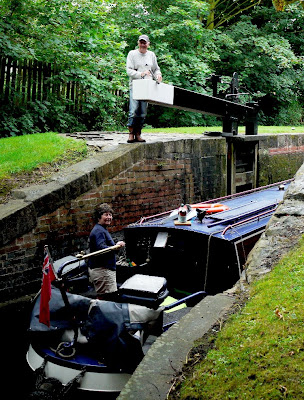 Haere ra, farewell Ray and Pauline, until we meet again ...
We arrived in Retford, our final destination on the Chesterfield Canal, late in the afternoon. Too late for the Asda supermarket unfortunately, so that’ll have to wait until tomorrow morning.
We went for a walk to the cemetery that I thought some distant relations were buried at, but after spending more than an hour searching the massive graveyard, I texted Dave, who said that the graves we were looking for were at North Leverton, about five miles out of Retford! Oh dear, that was a bit of a waste of time, I so should have asked him before we went there! It really was a very well kept graveyard though, and for some unknown reason I have a morbid fascination with graves and reading about people who've died and wondering what happened to them. Ah well, another time maybe we’ll come back by car and get to the graves we were looking for. 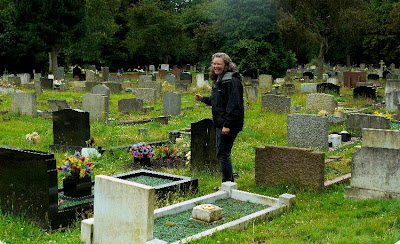 OMG! This graveyard is massive! We'll never find what we're looking for!
Correct! You're in the wrong graveyard, lol! 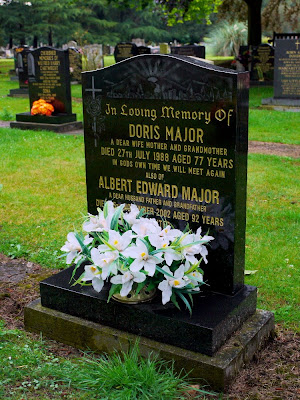 We thought we'd found what we were looking for - the grave of a 'Major', my grandma's maiden name and the surname of my second cousin's family
Tomorrow we’ll get some supplies in and hopefully find a laundrette to do a bit of washing (one of the things that will be fantastic to go back to is a washing machine!!!). We also need to phone up about getting a new inverter sent to us, hopefully at West Stockwith Lock ready for our return there on Tuesday with a bit of luck!
Posted by Northern Pride