An interesting and fun-filled weekend with Lisa and Rob

We were hoping to 'pump out' on Saturday morning, even though we hadn't yet got a 'red light' on the system, we wanted to be prepared for the extra people on board over the next few days.  The only boatyard in Banbury, or for miles around, is Sovereign Narrowboats - Barry suggested we phone first to see what time they closed in order to get to the winding hole, turn around and get back to the boatyard in plenty of time to collect our visitors at 1410hrs.  I duly telephoned them, like the obedient wife (yeah right!), and received an answering message telling me that they were only open Monday to Thursday, 10 till 4' - unbelievable!  So no pump out to be had ...

Seeing as we were staying around Banbury for a few days, I thought I'd take the opportunity to get a sight test and buy some new glasses - it's cheaper here than New Zealand and I hadn't had either for over three years - my glasses are so scratched I have to clean them every five minutes to be able to see anything.  So I went to Specsavers (there's one in Gisborne now amazingly enough!) as they had some special offers on - well so I thought!  But by the time you've added this and that on, it still worked out at over £250!  It'll be 10 days before they're ready so we'll collect them from Oxford.  Expensive but essential unfortunately. 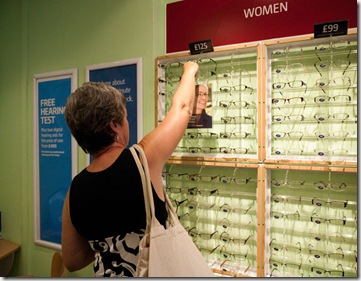 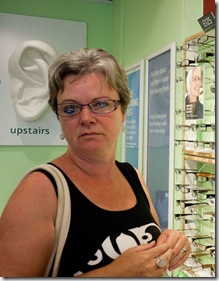 Mmm..., maybe I'm checking out the most expensive pairs?! Why do they put the price sticker over one of the lenses so you can't really see what they look like?

After a quick shop in Marks and Spencer Food, we moved through the lock in Banbury and I walked to the station to collect Lisa and Rob from their train that was due in at 1410hrs, while Barry went to the winding hole to turn us around.  The wonders of public transport once again - they eventually arrived just after 1600hrs due to a delay from a fire near the line in Coventry.  The Fire Service had come to put out the fire and ran out of water (!) so had to go away and return again with fresh supplies.  We had a table booked in Cropredy, at The Brasenose Arms, at 1930hrs for dinner - we still made it in time - but only just. 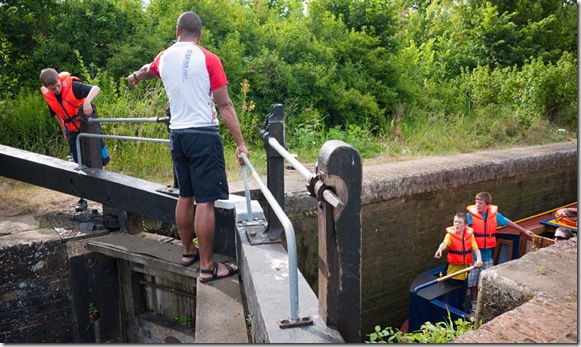 "Put the windlass on and then open the paddles ..."

Travelling back the way we'd come on Friday, we were rather unlucky to find ourselves behind two narrowboats full of what appeared to be schoolchildren and their teachers, learning how to drive the boats and work the locks.  So after our earlier delay we were concerned that we wouldn't get to Cropredy in time.  At the second lock of three, the first boat was taking a lot longer than usual, so Barry went to check out what was happening - one of the boys had thrown his windlass across the lock to another boy and it had dropped into the water!  Barry came back to the boat, got our magic magnet out, and retrieved said windlass.  Subsequently he felt able to ask if we could jump the queue so that we weren't so late and they were most agreeable - thanks guys! 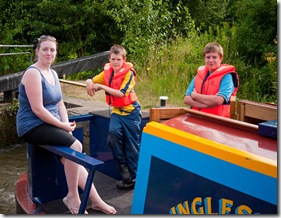 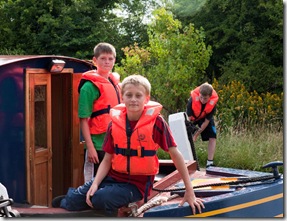 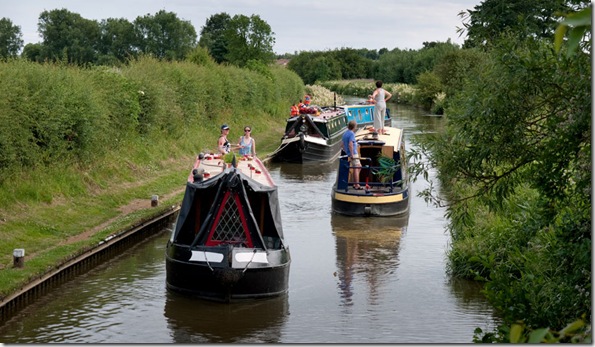 A very congested part of the canal today - always happens when you're in a hurry!

We found a mooring in Cropredy easily enough, and walked up to the pub for dinner.  Sadly it wasn't so good as it had been the day before - the service was poor and it took ages to get a menu, then eons to place an order and for the food to come.  Even Barry, who's the most patient person I know, was getting a little stroppy.  He asked at one stage how long the food would be and the girl said "oh sorry, I do apologise, there's a delay in the kitchen."  To which Barry replied "but we haven't even ordered our food yet!"  She then forgot Rob's pint of cider, half an hour later we asked where it was, again an apology, but then she had the cheek to put the missing pint on our bill at the end!  Ah well, the food was good, and the place is pleasant - there was a very good live blues band on in the bar, and we saw them for half an hour after our meal. Needless to say we didn't leave much of a tip, though we did want to give the hopeless waitress some advice!  Maybe she was just having a bad night? 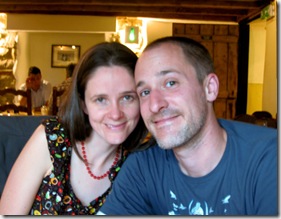 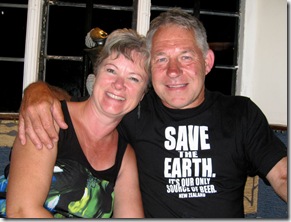 A romantic meal for four - shame about the service!

I've been in the public service for much of my life as a nurse and a midwife and know how important 'people skills' are.  Our differing experiences of the same place on two consecutive days just goes to show how the front of house people you meet can make a positive or negative impression on you.  The barman on Friday was so welcoming, friendly and professional that we thought the pub was a fantastic place - so much better than the snooty Red Lion we'd just visited (again, if we'd had someone else there our impression could have been seen in another light).  The waitress was so matter of fact, blatantly ignoring us, slow to communicate anything and to be honest hopeless at her job, and so our lasting impression of the place is mixed.  True she may have been having a bad day, but surely it doesn't take much to communicate with people and smile?

Despite the band being good, we didn't linger for long as it was only a small bar and the sound, fabulous as it was, became a little overpowering - on top of the sweltering humidity of the night.  We walked back to the boat and had a game of cards before retiring. 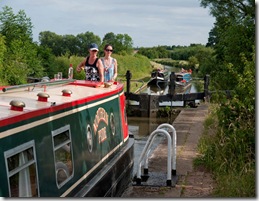 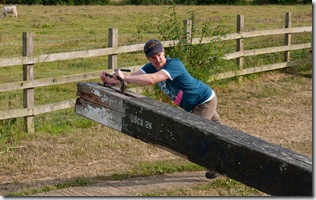 Unsurprisingly, the 'red light' came on mid-morning on Sunday - but we were powerless to do anything until Monday morning when the boatyard opened - the realities of life on a narrowboat are sometimes a little concerning!

After a cooked breakfast, we completed the same journey for the third time - back to Banbury.  We made excellent time as amazingly each of the three locks had a boat just coming out as we arrived - and they were literally the only boats we passed on the journey, so very lucky. We had to moor up before the boatyard ready to 'pump out' as soon as possible on Monday morning, so had a bit of a walk to get Lisa and Rob to the station but still enough time to check out Banbury Cross and the 'Fine Lady' once more ... 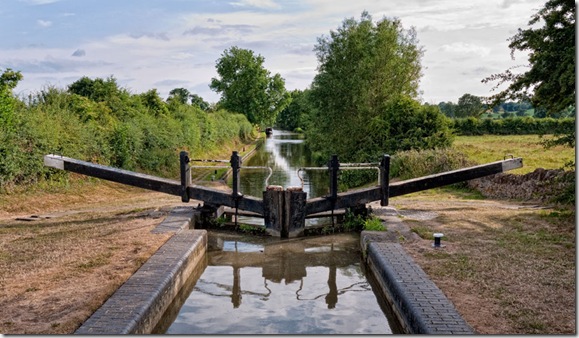 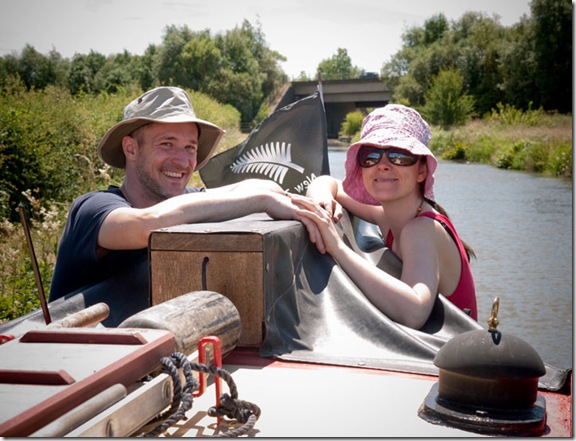 Rob and Lisa chill at the bow in their sunhats - happy, smiley people bless them 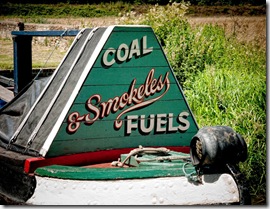 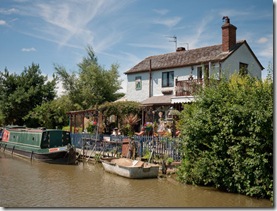 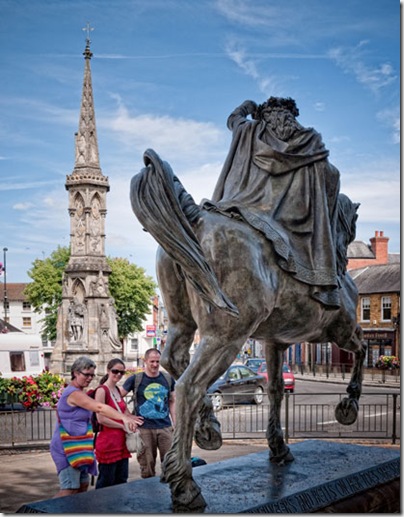 Giving Lisa a rendition of the famous nursery rhyme 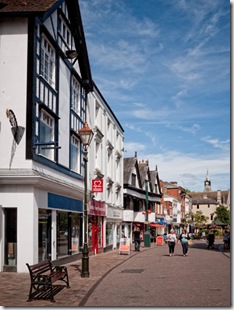 There is some mystery regarding who '... the fine lady' of the nursery rhyme is - a local explanation suggests she was 'Celia Fiennes', daughter of the third Viscount Saye and Sele who lived in Broughton Castle near Banbury.  She was very adventurous for her time and travelled the country on her horse around 1697, writing about her experiences - a lady way ahead of her time.  So it may've been a 'Fiennes Lady' originally?

The version I like best is the pagan one - according to custom a young girl covered in flowers and leaves, would ride a horse around fields as part of the spring fertility ritual.  This festival continues to the present day with the May Queen celebrations - originally this was to worship the Earth Goddess which could be why I find it so appealing!

Luckily they got to the station on time, but unfortunately their train was delayed once again, though only for 15 minutes this time, but it meant that they missed their connection at Birmingham so were an hour late home bless them.  It's difficult to know whether it would be better driving to places as then you have the possibility of accidents and road works on the way - so the reality is that travelling anywhere in England there's a fair likelihood that you'll encounter delays, and as Lisa says, at least you can relax,  watch a movie on the i-pad (because Rob has one!) and have a cup of tea on the train! 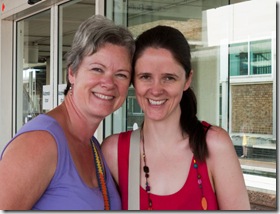 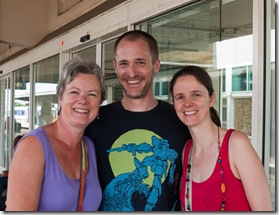 A brief but fun and fruitful visit - saying au revoir once again ... 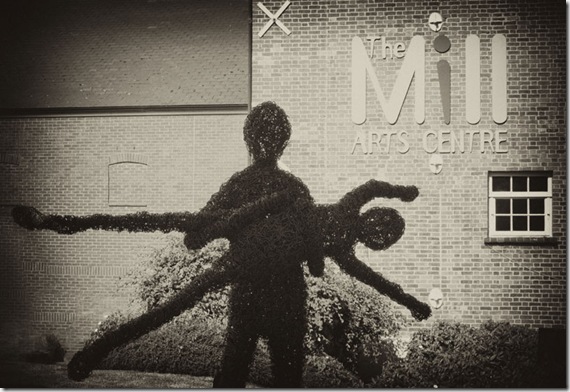 Walking back to the boat there was an acoustic session in the sunshine by the Arts Centre, a lively place with a couple of these 'spaghetti statues'

In the evening I phoned my parents who reminded me that the World Cup final was playing - so we took another walk into town and found the 'Fleur de Lys' Weatherspoon's pub and watched it live.  It was probably the best game we've seen - mainly due to the Spanish team's skills and we were very relieved that they won - the Dutch team turned out to be a bunch of thugs!!

Apologies for being a little late posting blogs which has been due to spending time with our very welcome visitors - unfortunately I didn't check the web link that I posted a few days ago and seem to have pointed readers in the direction of an 'adult' site rather than the intended one!  Luckily Dijon spotted the mistake and sent us a message - thank you!  On checking and reading more, it would appear that we passed a famous boat on Wednesday - six men rowing from Land's End to John 'O Groats in two weeks!  They're obviously doing this for charity, so please log into their correct site at www.celebrityrow.co.uk and there's a link within that where you can donate to some extremely worthy causes - amazing people.  The last part of the journey takes them up the North Sea, rowing 24 hours a day, two hours on and two hours off in two teams of three, so please give generously.

On Monday my sister Viv and her partner Ray come to visit - more love and laughter in our floating home ... 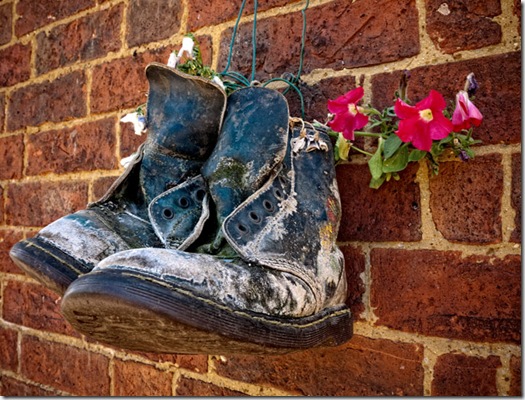 A novel flower pot hanging on a lock cottage wall