Onto the Thames following a spectacular debacle by Specsavers!

After three and a half years with the same pair of now very smudged and scratched glasses, I'd been eagerly awaiting the arrival of my new varifocals and prescription sunglasses having been 'reliably' informed by the Banbury branch of Specsavers they'd be in Oxford within 10 days of ordering.  I'd phoned Oxford on Monday, who confirmed they'd be with them by Thursday, and then had a call from Banbury on Tuesday to tell me the same story (are you with me so far?), so was convinced I'd be experiencing a new clear vision from the stern of the boat in the very near future - but alas, it was not to be ...

Sarah's son Saul (that's a bit of a tongue twister!) came to spend the day with us on Thursday - I'm not sure what possessed me to volunteer for this predicament, but it sounded like it could be fun!  He was certainly most entertaining, but I think it was the 'having to watch from eyes in the back of your head at all times' that most intrigued us. Bless him it must be challenging to be restricted to a 45 foot long and 7 foot wide space to move about in when you're used to a rather large house.

Firstly, and most importantly, Saul and I took a bus trip into Oxford to A/ get my glasses (lol!) and B/ get a few groceries - especially for things that Saul would like to eat.  Plan 'B' went smoothly, I suspect I may have spoilt him a little by giving him free rein of putting whatever he fancied in the trolley (it's called having a quiet life I think, 'aunties' are able to do this on the odd occasions that they child-mind surely?)

Plan 'A" meanwhile went rather awry when the polite gentleman in the Oxford store informed me that they didn't have my glasses.  He telephoned the Banbury Branch who 'apparently' stated that said items had been dispatched the previous day.  Mmm..., something wasn't quite right, but we weren't sure exactly what until, disappointed, I returned with Saul to Northern Pride to receive a phone call from a very pleasant woman in the Banbury store informing me that my glasses were still there and I did I want them sent to Oxford?  You can imagine my reaction, though Barry says I was actually quite calm and reasonable considering the circumstances ...

So still no new spectacles, they're now sitting in the store in Oxford, having been couriered there by the embarrassed Banbury lady on Thursday afternoon, but we'll be returning next week anyway - luckily!  The phrase 'the left hand doesn't know what the right hand is doing'  springs to mind - maybe I'll be entitled to something of a freebie in return for my inconvenience - though that remains to be 'seen' (pun intended!)

Ah well, life's full of trials and tribulations to challenge us but it keeps us on our toes, and in the scheme of things waiting another few days for my glasses isn't really a big deal.  So once we'd got Saul safely ensconced in his life jacket (much to his dismay!), we were off up the canal to Duke's Cut and onto the River Thames.  Saul jumped off at the slightest opportunity and pumped up his muscles enthusiastically helping with the locks and lift bridges. 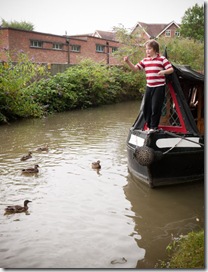 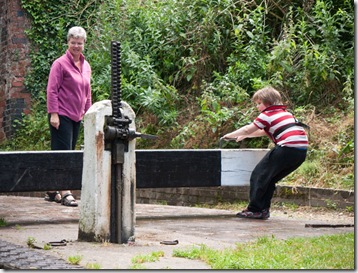 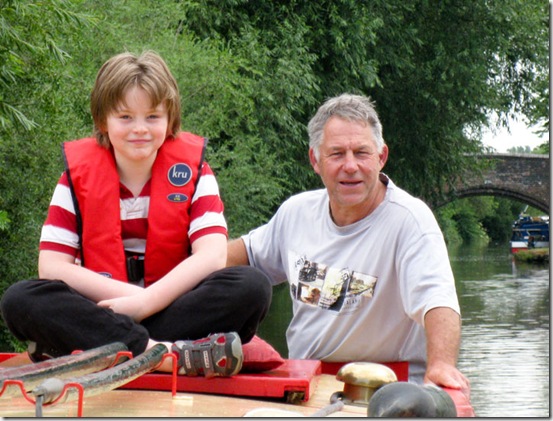 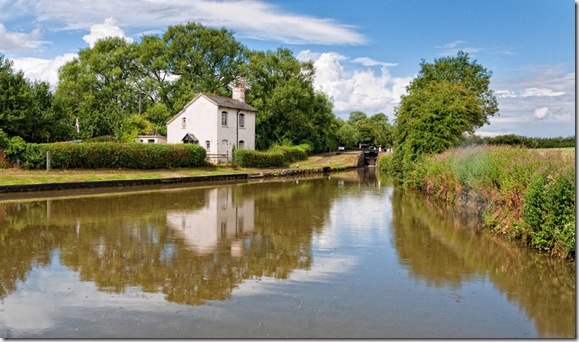 Cruising back up the still waters of the Oxford Canal ... 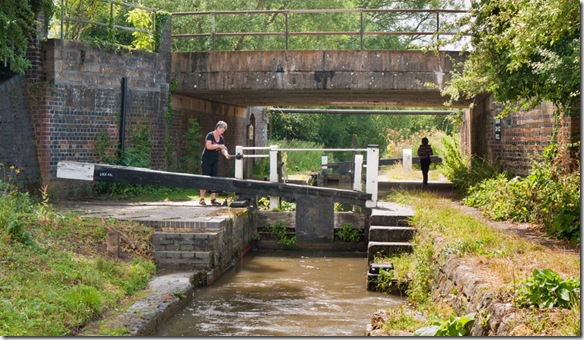 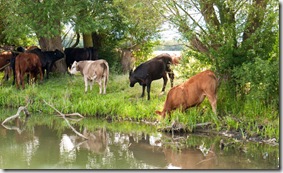 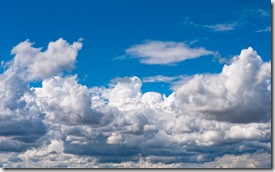 Cows and clouds - both beautiful in their own way

It's a stark contrast from the Oxford Canal onto the Thames, where we found ourselves very much in the minority - unsurprisingly this river is chock a block with cruisers of all shapes and sizes.  They're certainly able to manoeuvre their vessels more swiftly than heavy steel narrowboats, but despite that the maximum speed limit for either is 8km/hr. 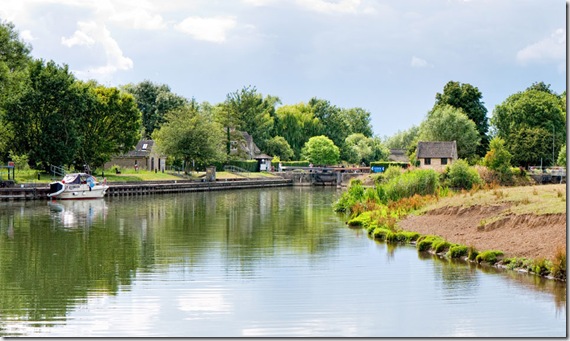 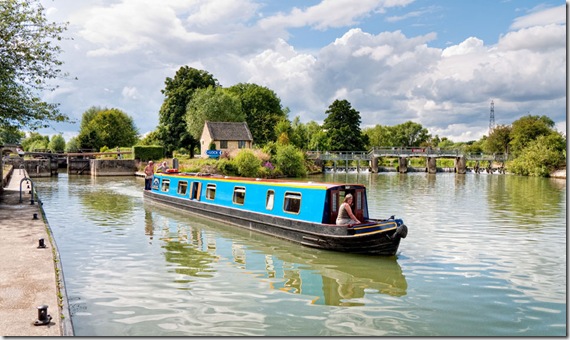 We moored prior to the first lock at Eynsham, where Sarah could collect Saul later that evening.  Behind us the owner of a cruiser had been fishing for American Crayfish - a pest 'introduced' thoughtlessly by someone into the River Thames, and he'd caught a bucketful that he didn't want.  As it's illegal to throw them back into the river, he offered them to us and we foolishly or otherwise accepted.  They're such small creatures that it takes ages to cook them all (having only got one large saucepan) and then extract any edible flesh, clean it of its 'pooh pipe' (gross!) and then savour each morsel. 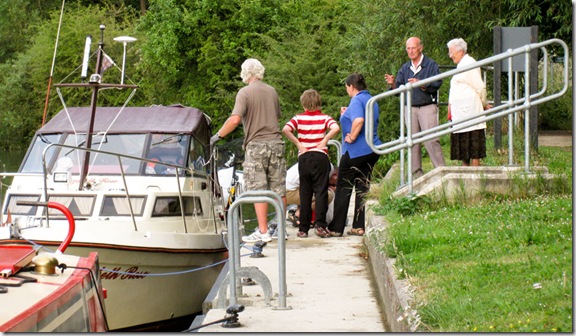 Barry puts the bucketful of crayfish into a plastic bag 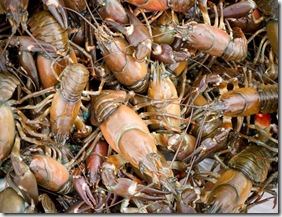 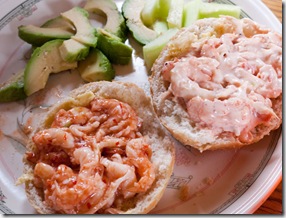 Graeme in NZ will laugh at the size of these!       Hours of preparation to make a small meal! 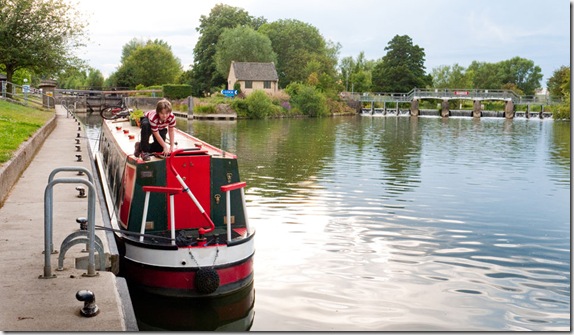 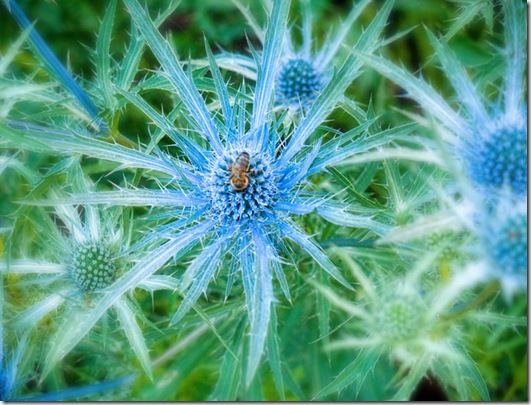 These are just astounding - any offers?