What is the most important thing in the world?

There's a saying I've always thought very profound, that fits with one of the major themes of our blog:

But, people will never forget how you made them feel."

More along those lines later ...

On Monday morning we moved up to Sovereign Narrowboats in Banbury shortly after 1000hrs, to use their extremely precious and much needed pump out - the poor boat was lilting to one side and soon afterwards was relieved to be floating high above water once more!  The chap in the boatyard had the cheek to ask us when we'd last pumped out and suggested we didn't leave it so long - if he'd have been open on Saturday we'd have been in there like a shot before the red light came on, lol!  While there we stocked up on a new gas bottle and some diesel - don't want to get caught out without those either.

Continuing back into the town to moor, I returned to the shops.  It's a luxury to have a variety on the doorstep, and most unusual as much of the canals for the past few weeks have been quite rural.  I wanted to find a hairdresser as my hair was becoming wild once again - many hairdressers seem to have Mondays off so it was a while before I found one, but on walking in I was attended to diligently and half an hour later was out the door with a trendy new crop feeling heaps better - thanks Bernard from the Achille Group of hairdressers

As Marks and Spencer have the grocery monopoly in the centre, I paid them another (expensive!) visit in preparation for our next guests' arrival at lunchtime.  They actually arrived and telephoned while I was in the Body Shop stocking up on moisturiser - must have been a bit of a make-over weekend what with new glasses, hairstyle and anti-wrinkle cream!  Luckily Barry was on board to welcome them and help with their bags, then they had a tour around Banbury to find a car park, eventually asking at the Information Centre who informed them that the 'Castle Quay' multi-storey allows 24 hour parking - you just can't access the car at night-time, but that isn't an issue.

Once we'd eaten some lunch we set off down the canal on our way to Aynho (pronounced 'eye-no' - silent 'h'), where we would turn around and moor for the night - the closest place with a winding hole and a pub!  Bless Viv, she'd never worked a lock before and I was a little cruel sending her down to open one of the bottom paddles at Banbury Lock, knowing that they were extremely stiff!  There were a few gongoozlers watching who were obviously amused too, but we all gave her a round of applause once she'd completed her task - people think it's relaxing spending time on a narrowboat, but it's actually quite hard work at times! 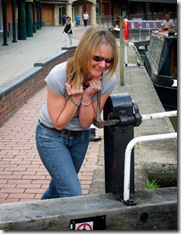 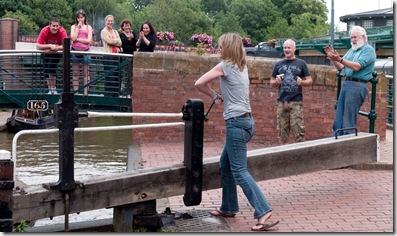 Viv putting in a big effort - with just reward

Ray stayed at the stern with Barry and was soon an expert driver, steering us smoothly through the many lift bridges along this section - most of them are raised so don't cause too much of a problem, but the channel through them is only just wide enough for the boat so it takes some crafty driving not to scrape the hull on the way. 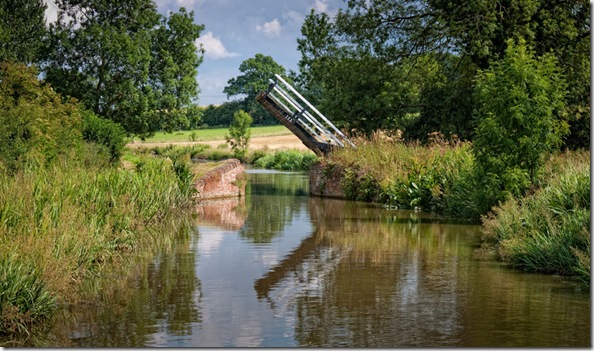 Most lift bridges are open so make for more interesting photographs

At the second lock of the route there was a bit of a hold up with four boats in front of us - the 'Towpath Telegraph' said that there'd been some hire boaters through who'd been in the lock for ages before they realised that the gate paddles were open at each end - oh dear, not so good when there's already a water shortage! 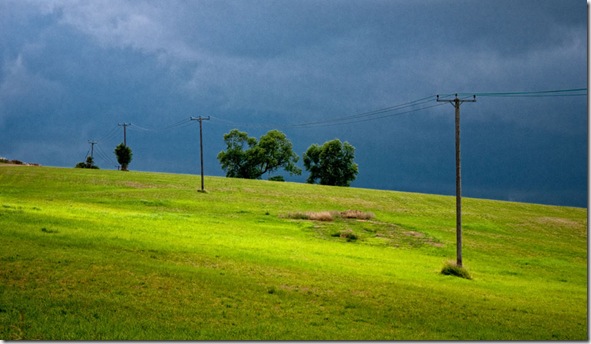 The weather turned a touch threatening at times 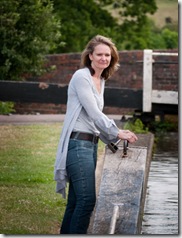 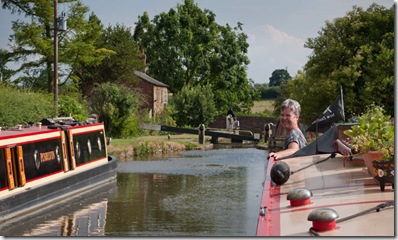 Viv and Sandra on lock duty 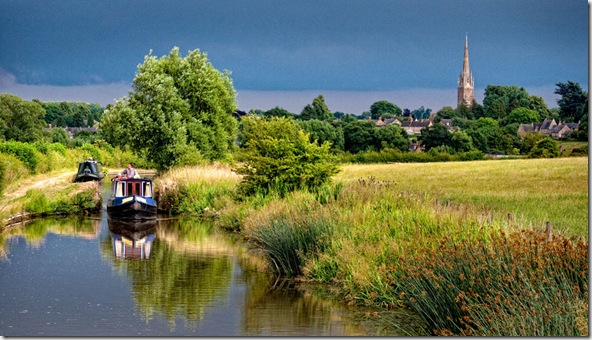 The sun poked through the clouds at Kings Sutton ... 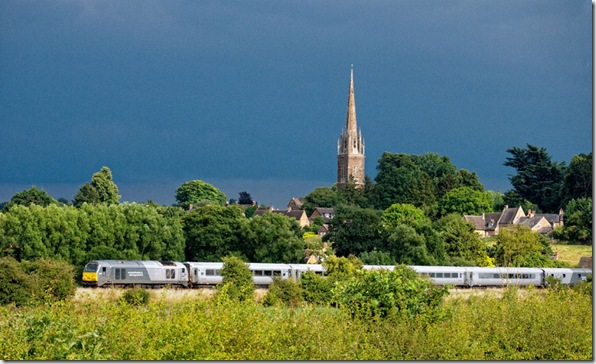 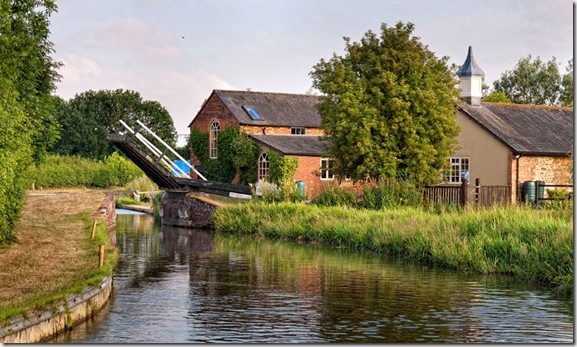 Unsurprisingly, in the afternoon (well actually I think it started at lunchtime), Barry got his home-brew beer out so he and Ray were merrily slurping as they drove along.  By the time we arrived at Anyho, and despite me requesting that he didn't miss the winding hole, Barry was distracted (as usual!) taking photos and missed it completely.  To be fair it is one of the least obvious turning points we've seen, but by the time they'd realised their mistake and sheepishly moored up and admitted their error, we were so far past it and many moored boats (and a bridge) that it would've been very challenging to back up.  So we'll have to travel further up the canal on Tuesday to the next winding hole before returning to their car in Banbury.  Needless to say Viv and I were less than sympathetic to their cause - too much drinking and chatting and photography and not enough concentrating on the job at hand! 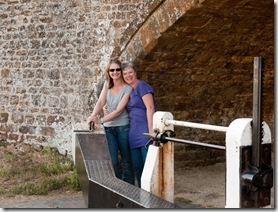 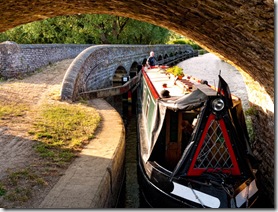 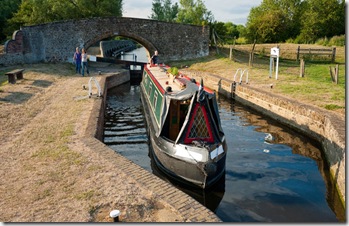 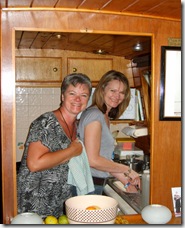 After all that work dinner was in order 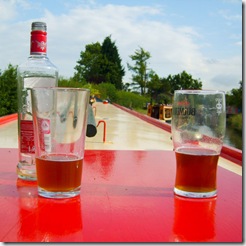 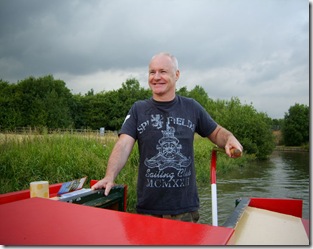 Looks like a Vodka bottle but it held the home brew, which could come from any sort of bottle from wine, spirits, soft drink, to milk bottles, etc - whatever was available at bottling time Barry in command and shooting overshooting the winding hole ... 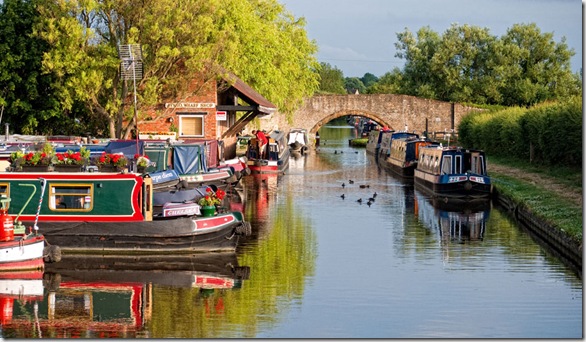 but it was worth it - Aynho Wharf in the glorious sunshine

I cooked a Thai green chicken curry for dinner before we went to the pub along the towpath for a drink or two - the Nicholson's Guide had stated that the food was expensive, so I'd decided not to risk poor service as well and bought provisions to cook instead.  However, our experience at The Great Western Arms, Anyho, was one we won't forget in a hurry.  What an absolutely fantastic place it was!  Rene Klein and Ali Saul are the owners and possibly one of the main reasons that it's such an amazing place is the kiwi connections - Rene apparently spent 14 years living in Dunedin, New Zealand and has citizenship - and we discovered that the majority of the bar and waiting staff are from Barry's homeland - one of them, Paul Hughson, was even from Gisborne and Barry had taken his family portrait when he was 12 years old, as well as all of his school photos. What's more he was good friends with Barry's cousin's sons. What a small world! 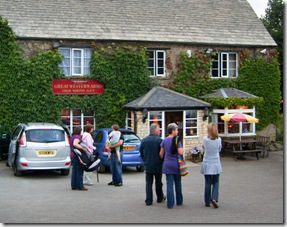 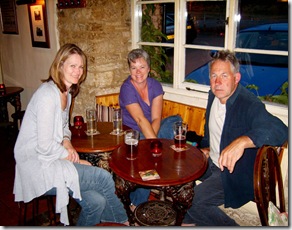 The Great Western Arms - note the girls hadn't had as much to drink as the captain who's looking a little worse for wear! 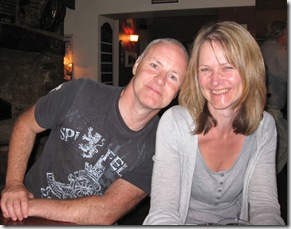 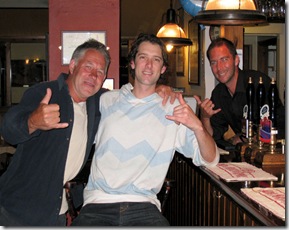 The pub was almost full of people eating, and this was on a Monday night at around 2100hrs, so that is usually a sign of a good restaurant/pub.  There were a number of little touches that impressed Viv and I, including: 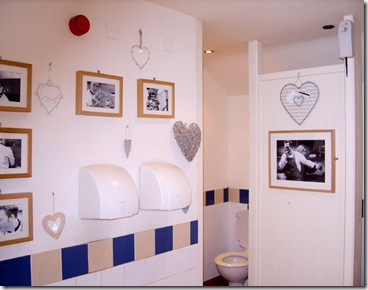 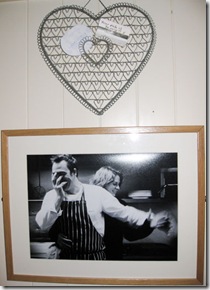 The ladies toilets with great photos of the owners all around

At closing time, we were the only people left in the pub, and Barry was deep in conversation with Paul, from Gisborne.  We were invited to stay on and play some pool - how could we refuse?  A fabulous night, thank you Garth, Paul and another couple of staff who's names we've forgotten sorry, for your great hospitality. 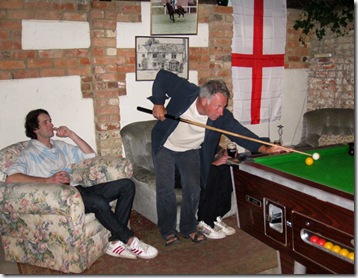 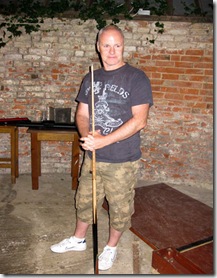 We still played English rules even though it was mostly Kiwis playing - "When in Rome ..." 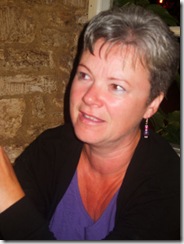 I'd like to finish today's blog with some more wise words, this time from Aotearoa (land of the long white cloud): 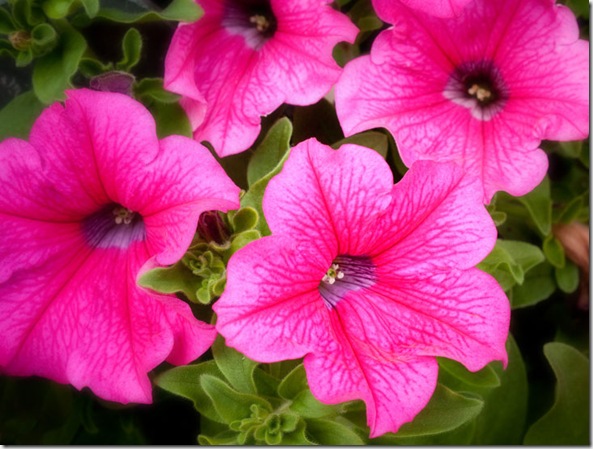 Pink, purple and pretty to reflect our wonderful day