Our meeting with Nick from 'Canal Boat' was planned for 0930hrs on Friday, so we made sure we were up in time - well actually I set the alarm on my phone for 0800hrs and thank goodness woke up spontaneously at 0830hrs - obviously my phone alarm doesn't work unless the phone is switched on which seems ridiculous to me!

Nick brought along Mortimer Bones, another blogger and contributor to 'Canal Boat', as she moors not far away at Thrupp.  They arrived around 1000hrs and came back to the boat for a cup of tea and a chat.  What nice people, we had a thoroughly enjoyable morning with them and look forward to seeing an article hopefully in the September issue - watch this space!

Sadly, what we totally forgot to do in all our excitement at meeting such prestigious people, was take a photo of them!  Goodness me, what are we like!  So we've absolutely no proof that they were ever here - you'll just have to take our word for it and buy a copy of the magazine next month, lol!

As our cupboards are rather bare, we visited Heyford Wharf Visitors Centre to eat some lunch at their waterside bistro called 'Kizzies', prior to setting off to find a supermarket somewhere down the canal later today. 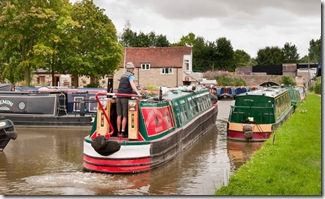 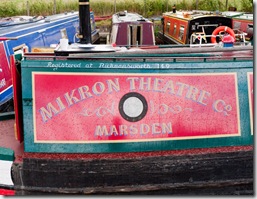 I picked up a leaflet for the Mikron Theatre Company, a group performing two plays 'Striking the balance' about the fight for equal pay for women, and 'Pedal Power' about 100 years of cycling.  They're travelling the waterways during the summer months and have been '...touring and telling the stories of the real people caught up in the big events'  for 39 years would you believe?  Unfortunately I didn't check out the programme until we were well past Lower Heyford, when I discovered that they were actually performing on Friday night at Heyford Wharf, had been at Tooley's Boatyard on Tuesday and The Great Western at Aynho on Wednesday evening - we'd literally missed them by a day each time, what a shame!  Maybe we'll catch them somewhere before they finish on 23rd October. 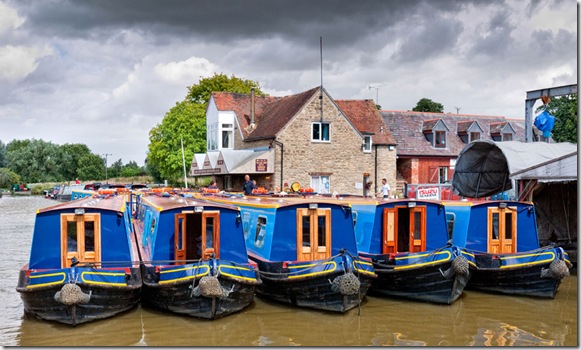 It's Friday morning, boat return day, so the hire boats are in for servicing, etc, and out again this afternoon 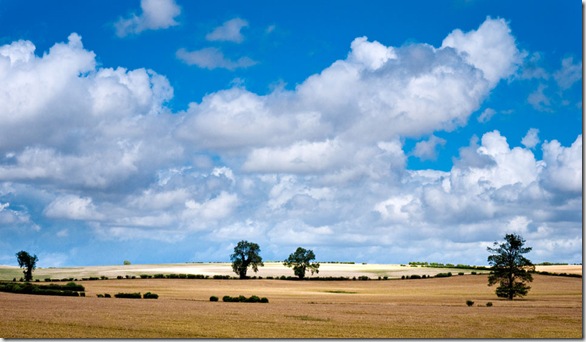 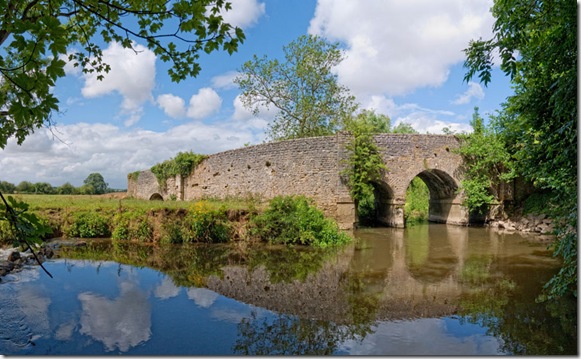 How gorgeous is this bridge?? 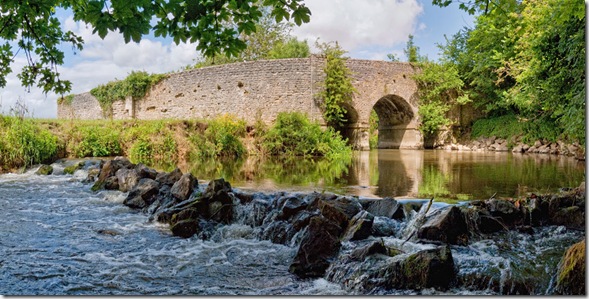 It's Northbrook Bridge, spanning the Cherwell River - a packhorse bridge which continues over the canal to the right 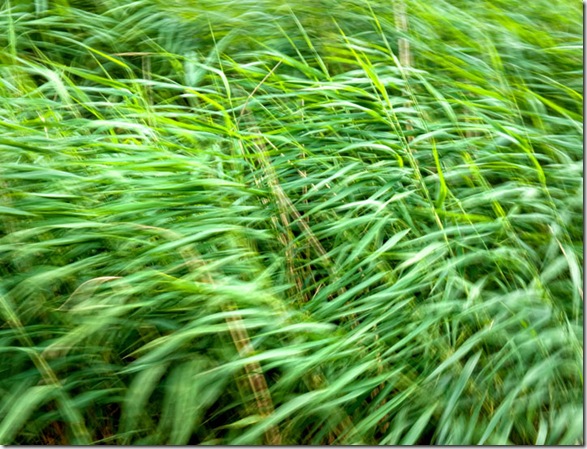 The wind was blowing fiercely ... 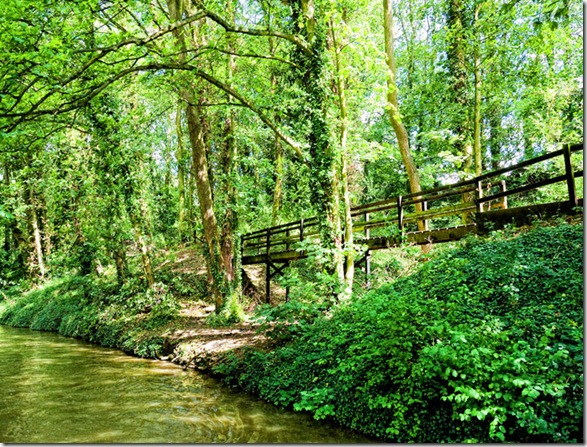 through the surrounding fields and woodland 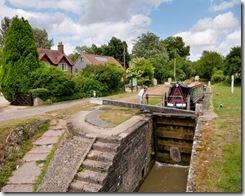 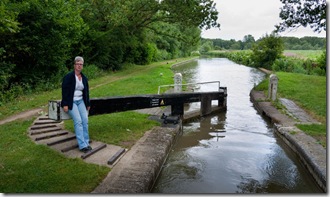 A mixed day weather-wise, but that didn't detract us from appreciating this pleasant rural stretch of canal 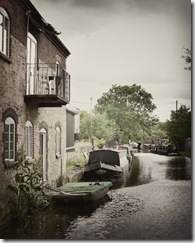 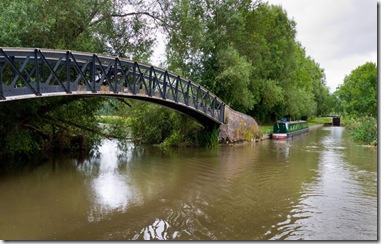 A variety of interesting scenes for the photographer ... 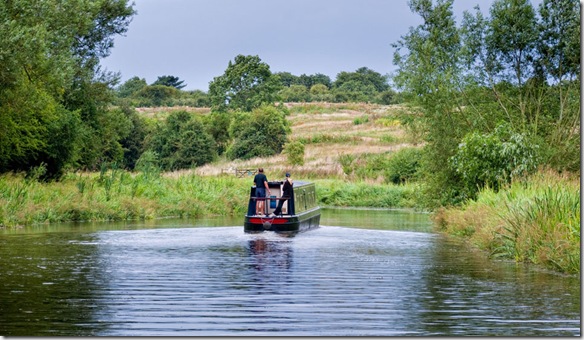 with idyllic cruising and not too busy 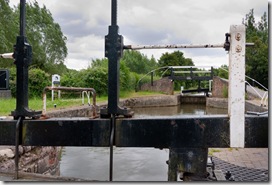 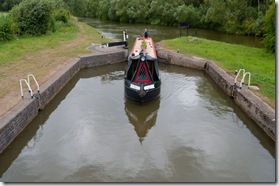 Another wonderful weir lock off the River Cherwell 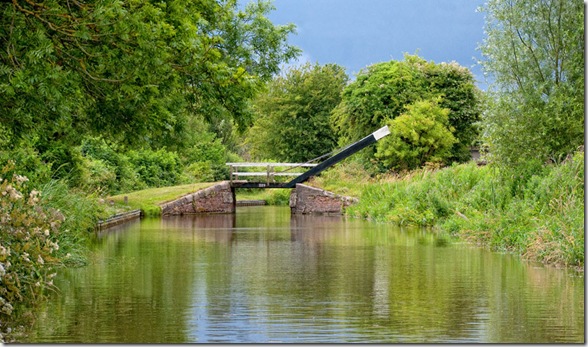 Lots of lift bridges along the Oxford Canal 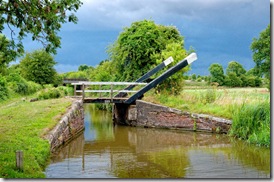 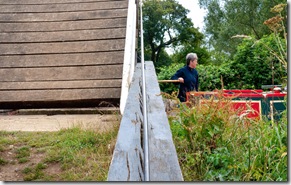 Passing underneath the lift bridge

We arrived in Thrupp late afternoon, passing Mortimer Bones who was on her way up to Heyford over the next few days so wasn't in her normal mooring spot.  There's not a lot to Thrupp, but it really embraces the canal and couldn't survive without it - more details in the next post. 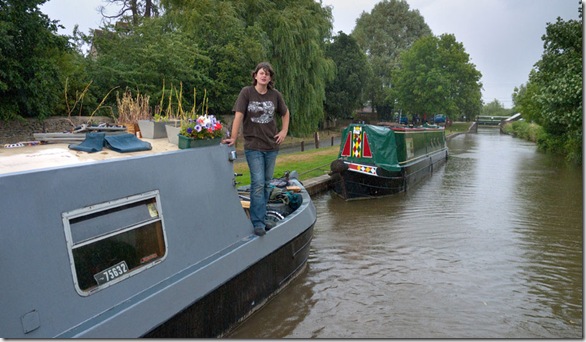 And here's Mortimer in the flesh on her narrowboat 'Bones', just as the heavens opened 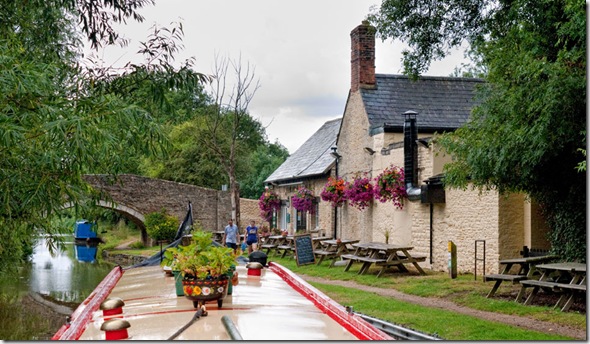 Passing by 'The Jolly Boatman', one of three pubs close to the canal at Thrupp/Kidlington

We moored up behind fellow blogger Maffi's boat 'The Milly M', and took a walk to the Co-op store a few minutes away to stock up on essentials.  It's not even large enough to have shopping trolleys, so we had to use two of the big baskets on wheels. Mortimer had recommended a pub along the cut called 'The Boat Inn', so took a wander back up the canal after dinner and found a very relaxed atmosphere pervading the premises - though this changed somewhat when an hour or so later a bunch of marauding pirates invaded and took over!  Things did get a little out of hand at times, with the most outrageous pirate attacking us all and ultimately riding on the shoulders of a reluctant boater, but generally it was all 'in the best possible taste'! 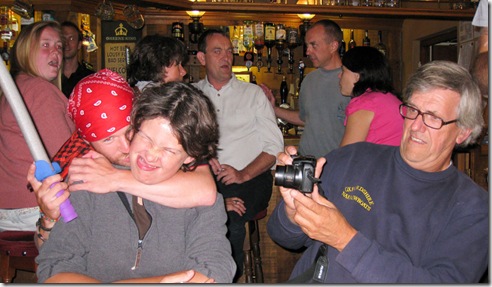 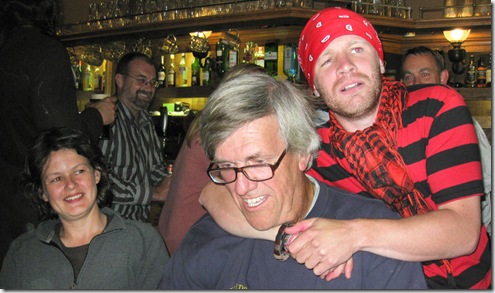 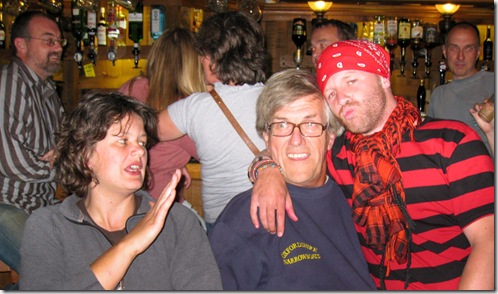 Mortimer Bones and Maffi fight off the enemy admirably but unconvincingly! 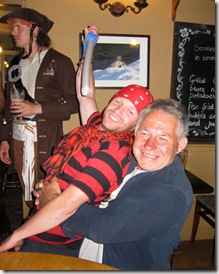 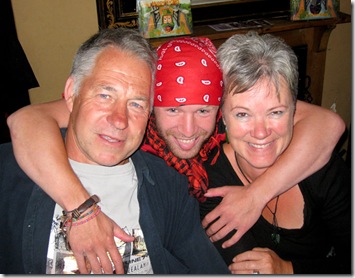 Barry and Sandra embrace the buffoon (bless him!) - or was it the other way around?!

It was late before we ventured back to the boat, along the dark of the towpath (I keep forgetting to take our torch out with us!), following a rather exciting day all in all!  That's one of the many pleasures of cruising the canals, we never know what we'll experience from one day to the next - marvellous magic moments mostly! 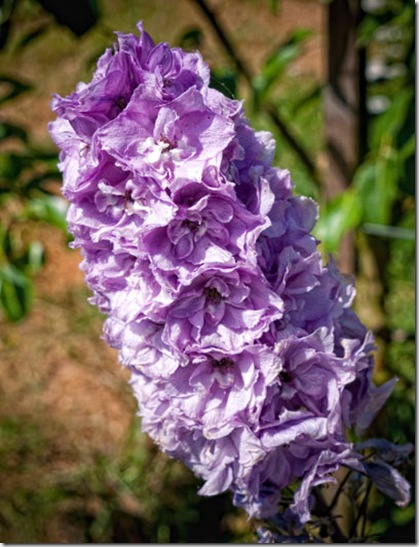 Isn't this gorgeous?  Goodness knows what it is, but it ain't a rhododendron that's for sure - thanks for the corrections to the previous posts!  We're not very good horticulturalists are we?!