When we walked along the path up to the road on Thursday evening to say goodbye to Saul and Sarah, we noticed a toll bridge over the river which appeared to be collecting money from each vehicle passing through.  According to the Nicholson's guide, this has been in place since 1777 - wow!  Barry got a photo on Friday morning of the toll keeper's hut in the centre of the road and the charges in 2010 are as follows: 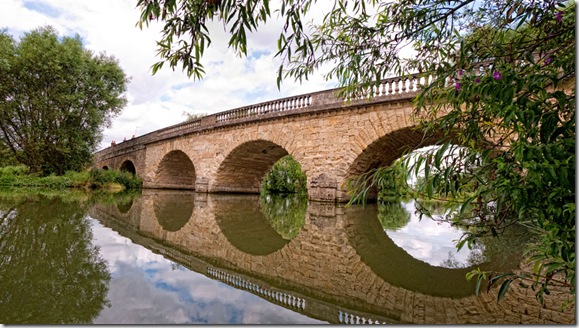 Swinford Toll Bridge - obviously still paying it off after 233 years 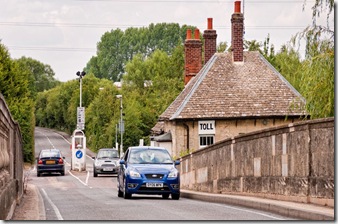 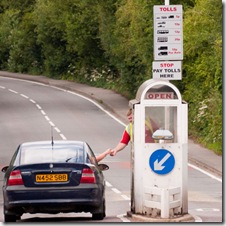 How fascinating, there must be a story behind this - would the money collected even pay for the toll-keeper's wages we wonder?  How quaint though.

Passing through our first Thames Lock, we had to pay our fee of £93.50 for a 15 day visit.  So we have until 7 August on the river, at which time we'll head onto the Kennet and Avon to Bristol and back, ready to do another 15 days on the Thames.  You're only 'allowed' two 15 day licenses, and although a month's license is cheaper, we wanted to do the upper Thames prior to the Kennet and Avon rather than returning to it (after doing the mad trip down the Thames to Reading overnight to avoid the license fee as was suggested to us!)

We also picked up our 'Guide to the River Thames' from the lock-keeper - it reads like a rule book of Dickensian proportions - DO this, but DON"T do that, AVOID this and that, etc, etc.  Then there's the blasts on the horn to tell oncoming boaters your intentions - yeah right, I can see hire-boaters understanding those rules when we give them two blasts on the horn to say we're passing on their port (left).  So typically British to issue such finite instructions so that if anything goes wrong they can say you didn't follow the rules to the letter!  Still, I'm sure it's all supposed to protect our safety and we'll follow it to the letter (if we can remember it all, which is unlikely!) ... 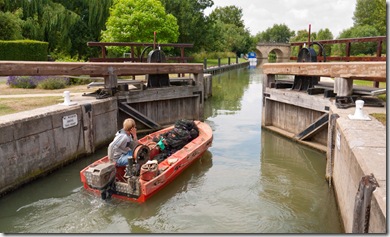 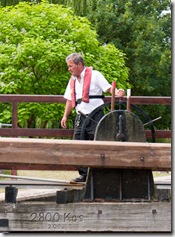 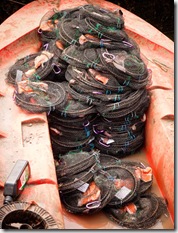 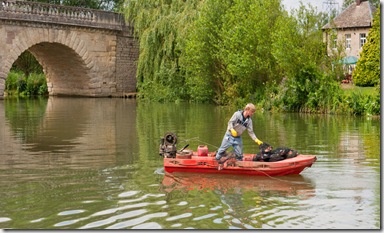 The guy in the dingy above is a commercial crayfisherman who sets his pots up and down the river and supplies live crays to the local pubs and restaurants. Since he can't throw the little ones that they don't want back, he sadly has to destroy them. 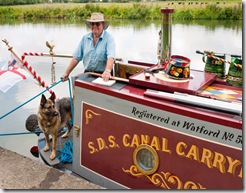 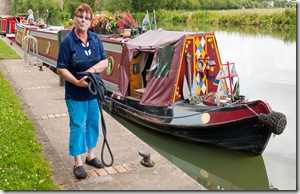 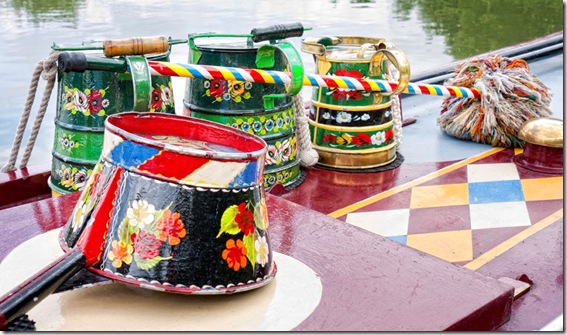 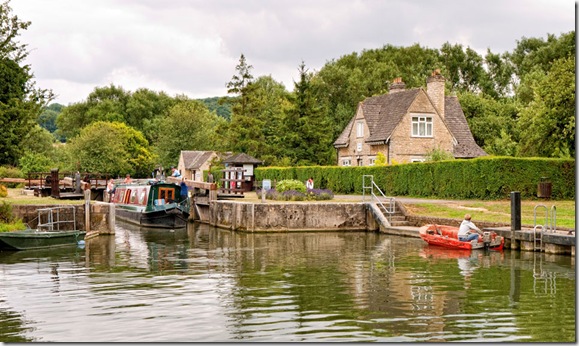 Every lock is 'manned' in the summer from 0900 - 190hrs June to August (with an hour for lunch from 1300 to 1400hrs), which certainly makes travelling on this stretch of water rather a doddle!  The locks are very well cared for and all have beautifully manicured gardens ... 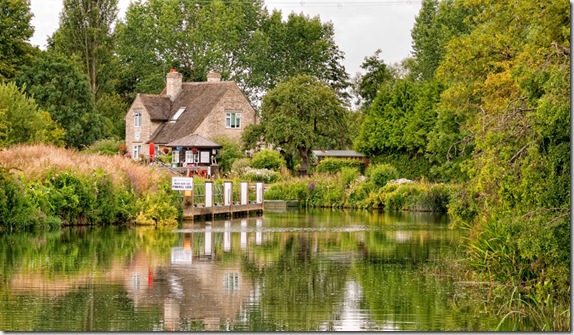 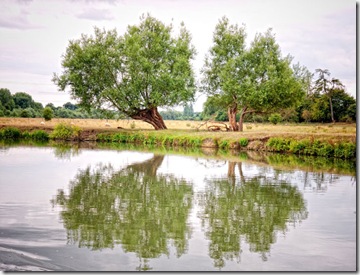 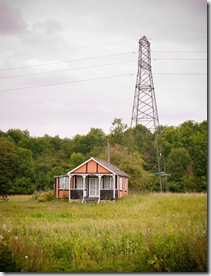 A very tranquil setting, though it would be nicer without the plethora of pylons! 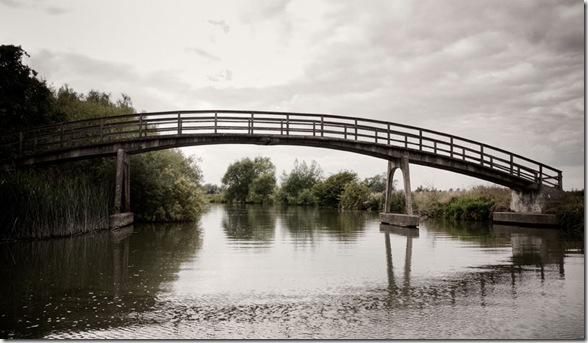 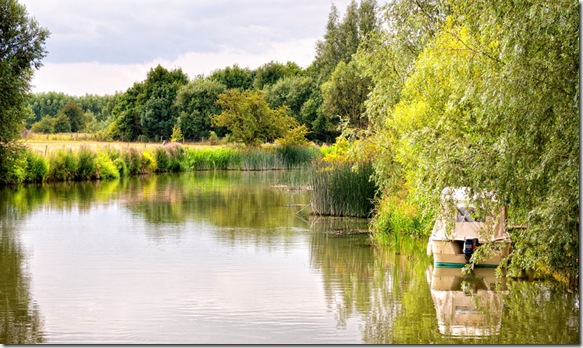 Typical view seen along the river

We meandered along the snake-like Thames to Newbridge, where there's a pub either side of river so of course we were obliged to sample them both!  On the one side was The Rose Revived Inn, seemingly a fine-dining experience with many tables on the banks of the river, and on the other side was the The Maybush Inn which was a lot quieter than its counterpart.  One imagines that there's a friendly (or otherwise) rivalry between the two establishments.  We certainly enjoyed the latter more than the former, as there was a real 'pub' atmosphere and Barry soon found himself chatting with a fellow boater (albeit of the plastic boat variety!) at the bar - leaving me sitting on my own outside!  I could hear his dulcet tones so went in to join him - his favourite place nowadays is standing at the bar of a British pub telling and listening to (tall?) boat stories.  I'm not a 'standing at the bar' type of girl, so find it all a little tedious, especially when I'm sober and my only company are chattering men drinking beer and getting more and more slurry with their words!  Ah well, sharing your life with another person is all about compromise, and poor Barry had had to sit patiently while Sarah and I rabbited on about women and madwives the other day ... 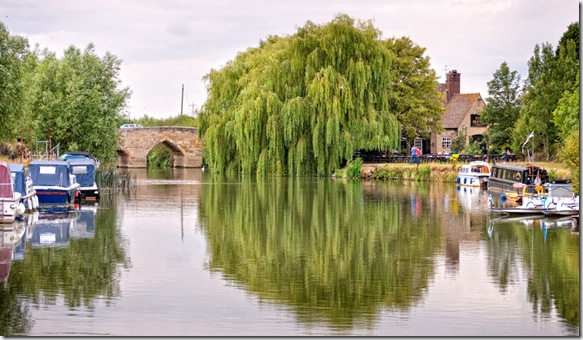 The Hamlet of Newbridge, which has a fine 13th century bridge - and our mooring for the night by The Rose Revived Inn 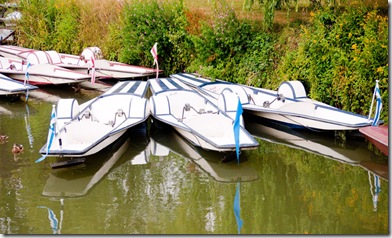 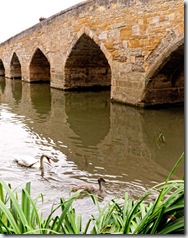 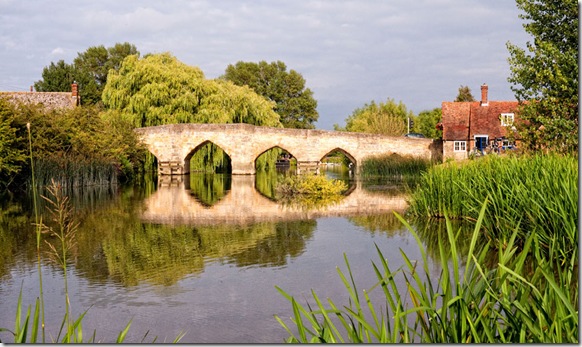 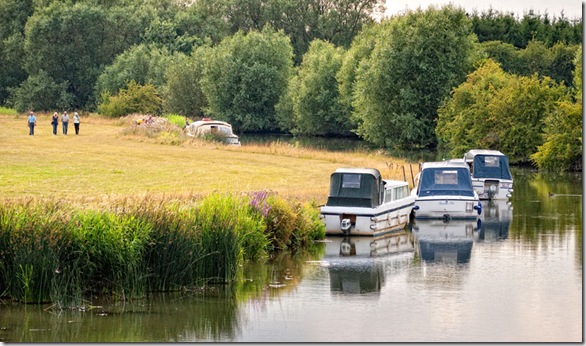 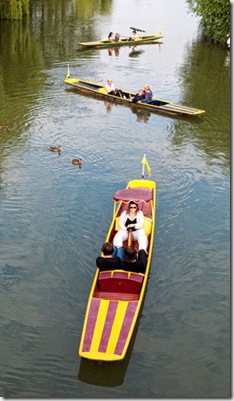 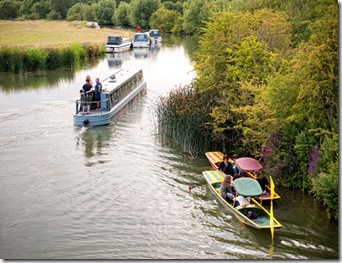 Friday night was the first time we've had a boat moor alongside us, though we suspect it won't be the last as it's now the school holidays so there'll be many more boats around. 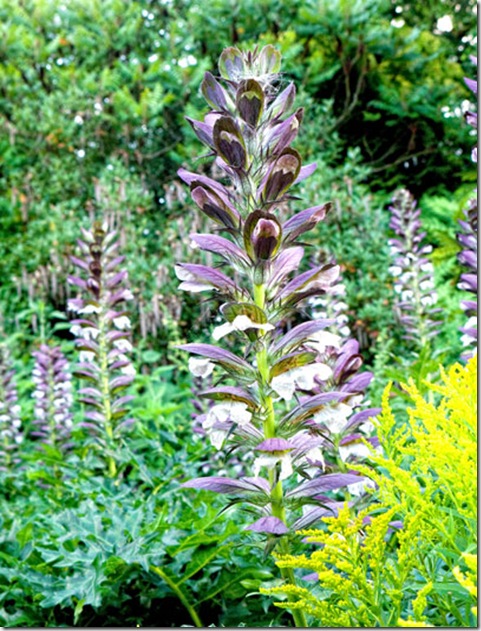 Looks foxglove-like, but suspect it isn't!