Trouble afloat - Northern Pride to the rescue before encountering her own problems!

We left Barrow-Upon-Soar late Saturday morning (we never seem to leave anywhere early, as we're always finishing the previous day's blog - we really must get a life!) and found that there's some gorgeous houses backing onto the river here also.  I wonder if these people appreciate how lucky they are to reside in such picturesque surroundings, I would suspect they do, but rather like living close to the beach in Gisborne I imagine that after a while you'd take it for granted.  Anyway, it's all very pleasing to see as we cruised on by. 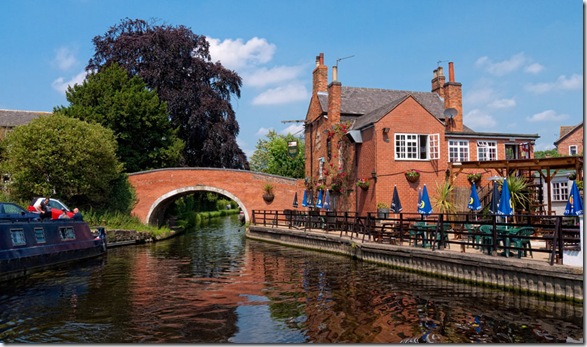 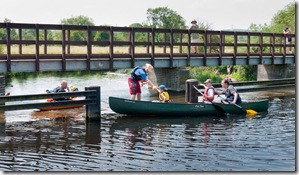 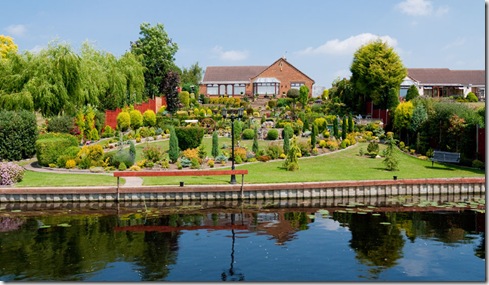 The waterway changes from the River Soar to the Grand Union Canal (Leicester section) and back again four times before Leicester, so you're never quite sure which one you're on!

We passed quite a few wide beam narrowboats (that's such anathema in terms isn't it?!) which are also pretty spectacular looking inside, terribly luxurious compared to our cute and cosy Northern Pride. There would certainly be many more home comforts and you could travel to Europe if you so wish to 'do' their canals, but you'd be restricted as to which waterways you could navigate in the Britain.  At least in our compact forty five footer we can go to all the canals and rivers.

As we drifted lazily along the Soar, I was reminded of the song lyrics 'England's green and pleasant land'; these are such pleasant surroundings that you can't help but feel a certain nostalgia for the England that didn't contain so many cars containing people rushing around everywhere. 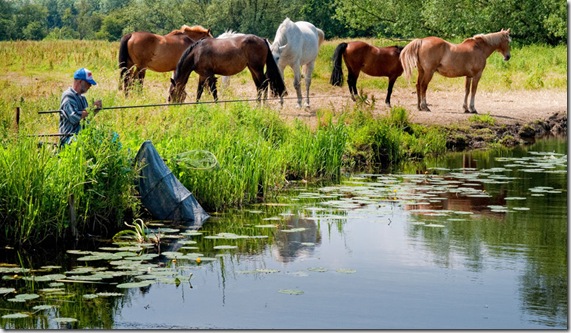 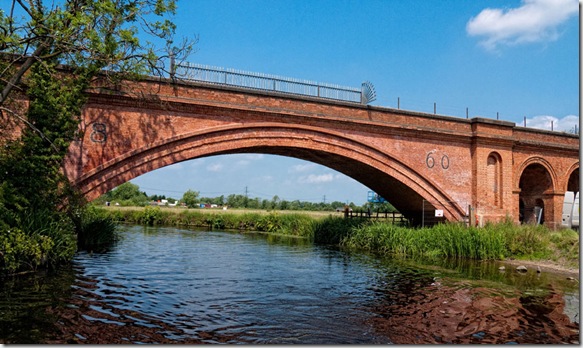 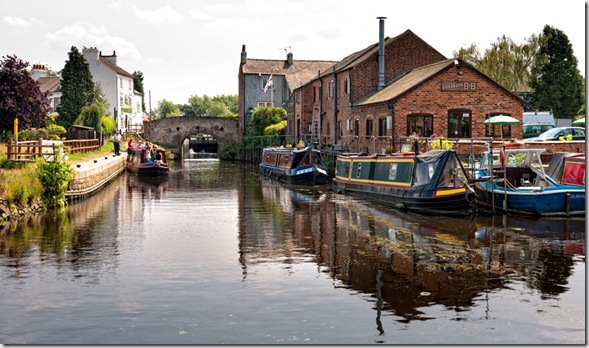 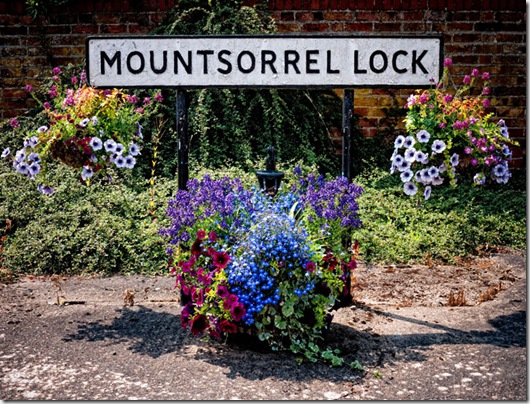 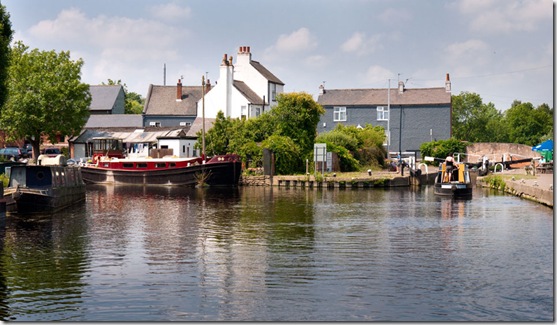 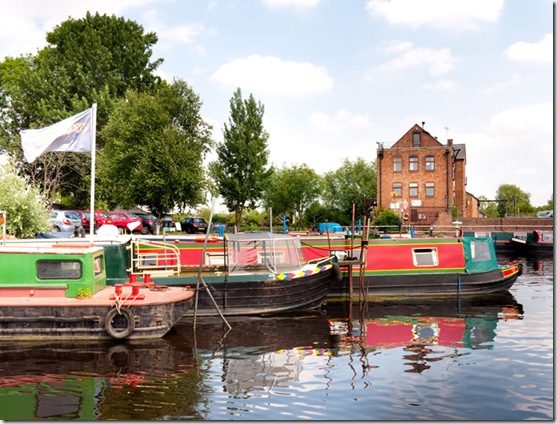 We moored for lunch shortly after Cossington Lock and walked a mile or so into Rothley.  Last year, when I was stranded in Evesham, I bought Barry a book from one of the charity shops called 'AA Book of British Villages' for a couple of pounds.  It was published in 1981 and is 'A guide to 700 of the most interesting and attractive villages in Britain'.  As we travel around we often check it out to see if any of the places we're close to have an entry, but more often than not they don't.  Today however, we found an entry for a place called Rothley.  This is a very interesting place, and although only small (just over 3,500 inhabitants) - here's five fascinating facts about the village:

After our wander around we stopped for a drink at a rather up-market establishment called 'The Woodman's Stroke' also known as 'The Woodie' (!).  We know it's upmarket because of the price of the drinks!  Either that or the barmaid couldn't add up!  Seven pounds forty for a pint of Bishop's Finger (no quips about the actress please!), a  Pimms and Lemonade and  a packet of Twiglets - or maybe that's normal? A very pleasant place to drink outside in the courtyard and obviously popular with the locals. 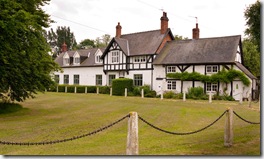 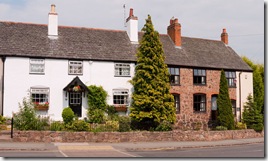 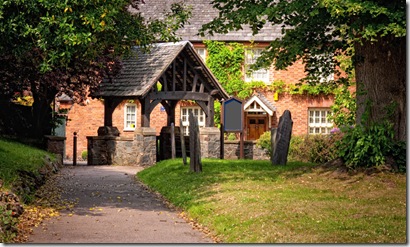 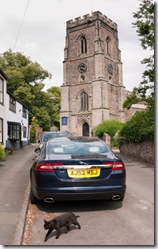 The parish church of St Mary the Virgin which has the shaft of a Saxon cross of the 8th or 9th century (Barry didn't take a photo because the 'cross' part was missing, doh!) - and a very friendly black cat who kindly crossed our paths and let us stroke him 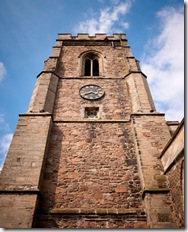 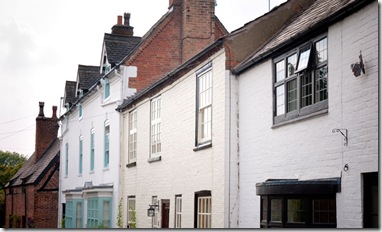 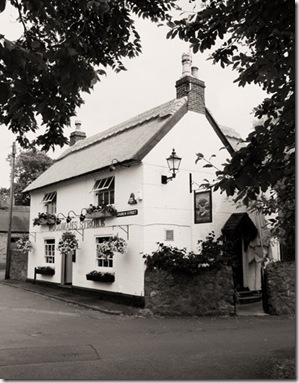 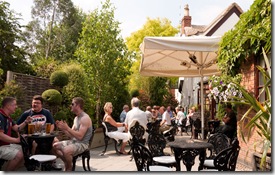 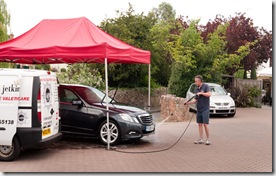 Fabulous pub, 'The Woodman's Stroke' - you can see how affluent it is here, the patrons even get the mobile car valet service to clean their Mercedes while they have a drink! 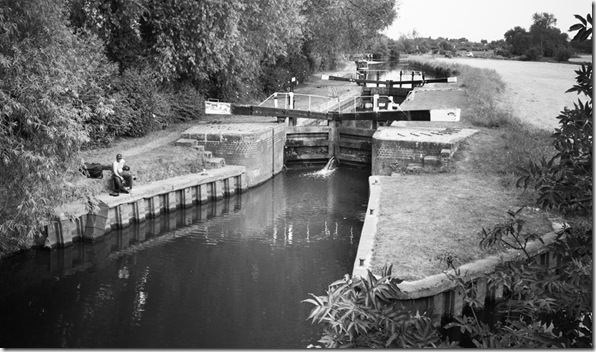 Shortly after leaving the mooring, we came across a cruiser called 'Duett II' marooned at the side of the river - they'd either ran out of diesel or broken their fan-belt but they weren't too sure - either way their boat wasn't going anywhere without a helping hand so we towed them to the nearest boatyard just after Junction Lock.  There were a few hair raising moments, especially when sharing a lock while still tied up together, but we managed to get them safely to their destination with time for a beer on the way! 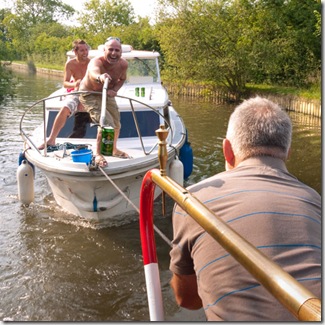 Towing the cruiser carefully - and cautiously carrying the Carlsberg across the water!

Spookily, as we left Thurmaston Lock, on the outskirts of Leicester, an alarm sounded on OUR boat, and an orange light flashed ominously, suggesting there was a problem with a battery.  We were rather concerned to say the least, but it turned out alright as we managed to get securely moored up before Birstall Lock, where Barry got down and dirty in the engine compartment and found the offending broken fan belt - fortuitously we had a spare on the boat so it was easily fixable - well it was if you knew what you were doing which Barry luckily did!

After fixing the boat, Barry became surrounded by families from the pub above the river - 'The White Horse' - who were celebrating someone's 90th birthday.  As I was sitting writing the blog I found myself inundated with giggling children who came on board to check out our home and rang the bell at the front a few times bless their cotton socks!  How lovely, what a friendly place and a cool mooring spot, so pleased we had to stay here!

Later on we sauntered up the bank to the pub and sat outside in the sultry summer air, chatting to a couple of local ladies one of whom came back to the boat for a Baileys night-cap and stayed until the early hours - so it was a late finish to the day!