Of course we had free admission with our National Trust membership cards, but if we'd wanted to go the working farm or visit the servants quarters and see staff in period costumes informing us about life in days gone by then it would've cost us 6 quid each!  Ah well, seeing as we spent 5 weeks of our limited budget in the first two weeks of our trip, we decided against the optional extras and concentrated on the Hall, the monuments and the gardens - and we weren't in the least disappointed ... 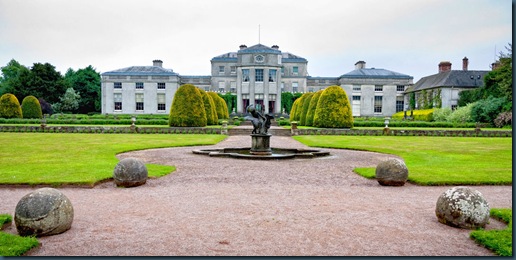 View from the river Sow towards the Hall

The majestic entrance to the Hall

Shugborough Hall really is an exquisite example of how the rich used to (and many still do bless them!) live.  One can only imagine the advantages there would have been (be!) living life amongst such luxury.  I'm really not sure I would enjoy it, you'd have to fraternise with other 'rich' people, many of whom can be rather false and intimidating in my experience; but I suppose one never knows if one has never had the chance to experience it!

The house dates from 1693, inherited by Thomas Anson in 1720 (a descendant of Lord Lichfield), and until April of this year there's been a member of the Anson family residing in the Hall.

We were informed that the property was handed over to Stafford Council and the National Trust following crippling death duties in 1958 and 1960 when Patrick's father and grandfather died.  His father was only in his forties and tragically died from a bee sting.  Isn't it appalling that the government takes so much money just because someone has died - even if you 'own' property it doesn't actually mean that you have any money!  It must've been heartbreaking for the family to part with their inheritance - though maybe in some way it was a relief to not have to maintain such a huge property and grounds? 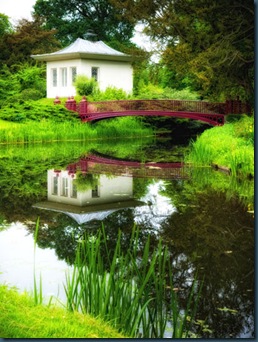 The extravagant monuments in the garden were commissioned by Admiral George Anson; a neo-Grecian architect called James Stuart built them, and they've mostly withstood the test of time.

The 'Red Bridge' was built specifically for the family to ride in their horse and carriage the 300 yards to church.  The Essex Bridge couldn't fit the carriage on - heaven forbid that they'd have to walk!

The Chinese House, to the side of the bridge, is believed to be the first of Thomas Anson's garden buildings completed in 1747.  Unfortunately it has limited opening times, and Thursday wasn't one of them! 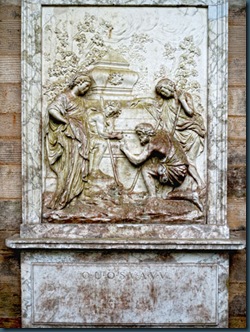 There's a strongly held belief of links to The Holy Grail at Shugborough - 'The Shepherd's Monument' has letters inscribed at the bottom and to date no-one has been able to crack the code.  It's also rumoured that the book 'The Da Vinci Code' was based around this!

Along with the ancient monuments there's currently a 'Wildlife and Sculpture Trail', by students and lecturers from Stafford College, until 28 October - including some very clever and thoughtfully placed pieces to adorn the Grade One listed gardens. 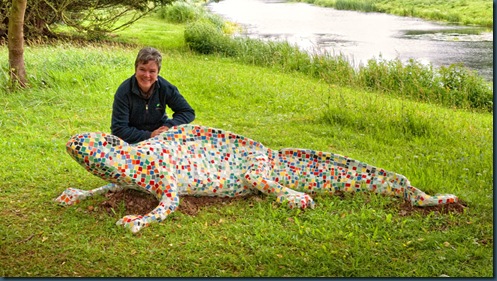 When the Anson's bought Shugborough in the early 18th century, there was a small settlement present.  As they wanted all of the land to themselves, they evicted the families living there and built them new homes in the nearby village of Great Haywood.  They would have been far superior to the homes they'd previously occupied, but imagine being uprooted and not being able to do anything about it? 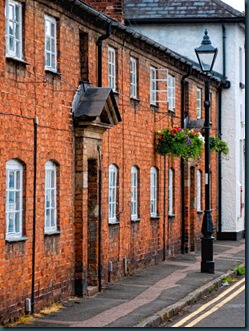 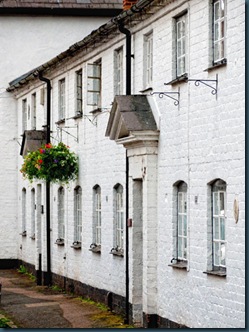 The symmetrical cottages on Trent Lane - built to re-house the previous occupants of Shugborough - now worth a small fortune!

The interior of the Hall that the public are given access to is just breathtakingly beautiful - lots of neoclassical architecture and furniture.  So ostentatious, but one can imagine the glory of dining there or dancing in this grand entertaining room ... 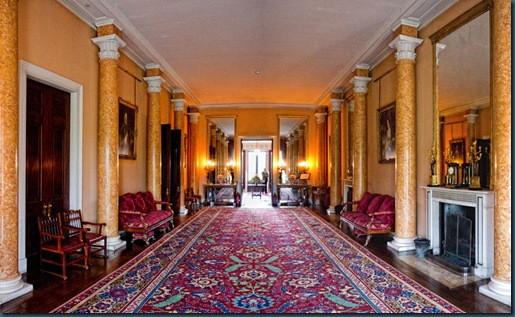 Sandra managed a little waltz along the carpet just to see how it feels! 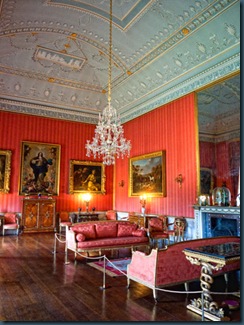 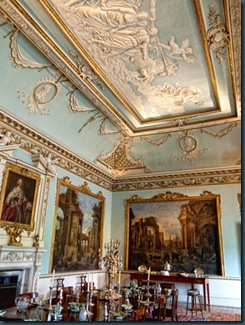 Lord Lichfield lived at Shugborough, leasing rooms from Stafford County Council who co-own the estate along with The National Trust, until his death in 2005 at the age of only 66 from a heart attack/stroke apparently - such a young age to die, maybe his indulgences in the 60's and 70's were to blame?  There's an exhibition of some of his brilliant photography from that era at the Hall currently; Barry met him in 1986 when he visited the NZ Professional Photographers conference and says he was a lovely man. 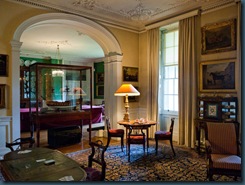 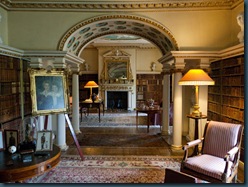 The drawing room and library

The current Earl Thomas Anson had been leasing a large private 'flat' (around 36 rooms!) at the Hall until April this year when he moved to his new residence in Devon, bought with his wife.  It's sad that there'll no longer be a member of the Anson family at the estate anymore, the end of an era. 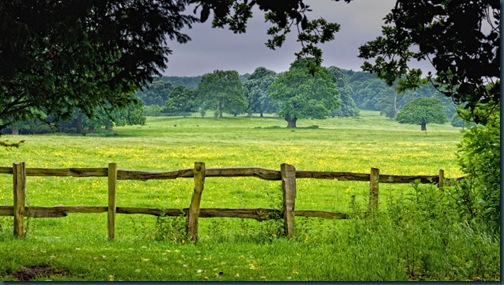 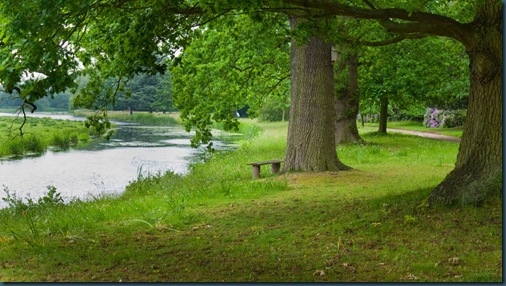 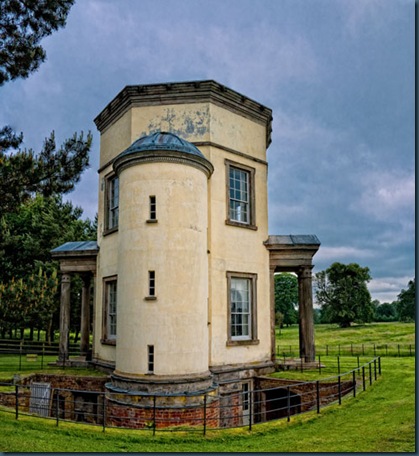 A better view of the 'Tower of the Winds'

It was yet another chilly and cloudy day, not the best for photos, but Barry always seems to manage to overcome the conditions with flair!  What a shame Lord Lichfield wasn't there - they could have had a great chat about photography across the globe. 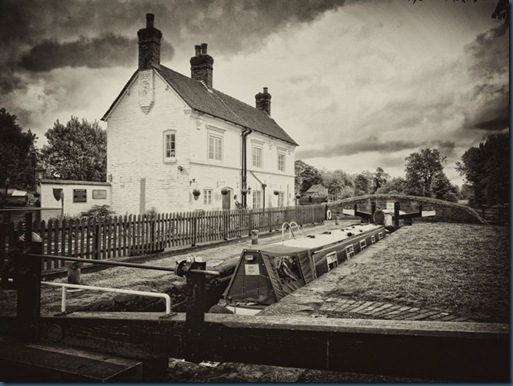 Colwich Lock, heading towards Rugeley on the Trent and Mersey Canal

We moved on late afternoon and had a stroll into Rugeley.  It's certainly not the most appealing of places - but then at 1900hrs, only 11 days away from the longest day of the year, it was grey and dismal so anywhere would have looked dark and dank in such circumstances!  Barry did his best to make it appealing ... 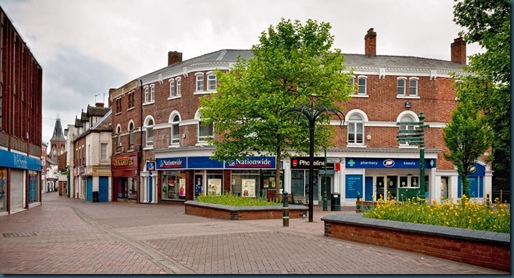 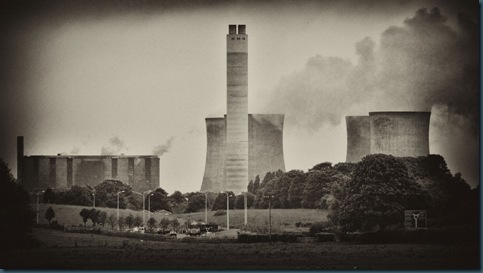 Having not filled up with water since Monday we had to move along to find some or we could run out mid-shower - it took a bit of time to get a suitable mooring meaning dinner wasn't consumed until after 2100hrs!  Crikey, I can feel another lie-in coming on in the morning, what a decadent life we're living ... 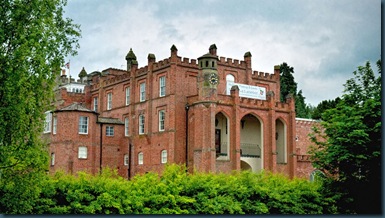 Hawkesyard Hall - just outside Rugeley - now a restaurant and spa 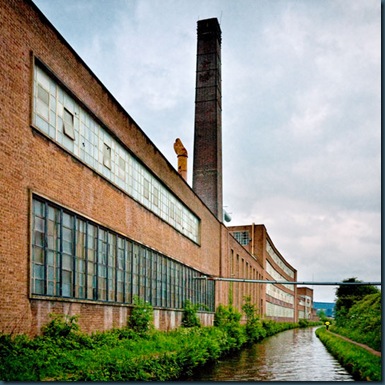 Armitage Shanks - likely to always be a thriving business!! 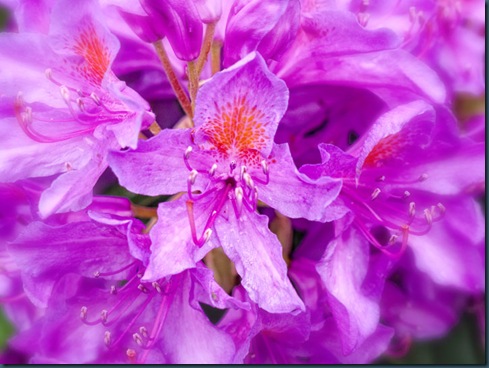 And another fabulous flower shot to brighten the day in this dismal 'summer' weather!

On Friday we're visiting Sandra's niece, Vicki, and great niece, Ria-May, in Handsacre, how cool that they live so close to the canal.