I had a quick walk into the shopping centre on Monday morning to find a white hat - in the current heat it's just too hot with our dark caps and without a hat, even with sunglasses, I can't see well in the bright sunshine!  I found a floppy white holey one in the sale in BHS, which did the job very nicely.  The market was in full swing, with the stall holders shouting their prices to the passers by, all vying to give the best deal.

Barry meanwhile, took a stroll to Bow Bridge as he'd read the story of Richard III and the wise old crone he'd met and asked her if he'd win the battle - sadly her prophesy came true that wherever his spur struck, so his head should be broken. 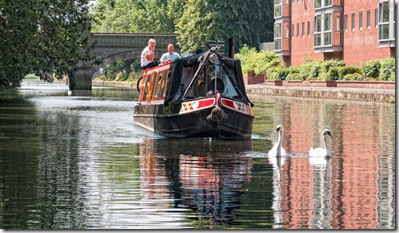 Still not many boats around for some reason 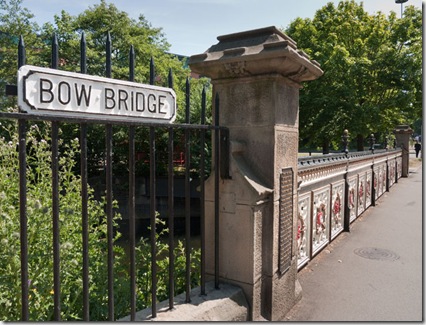 Bow Bridge over which King Richard III left alive for the battle of Bosworth, and returned deceased 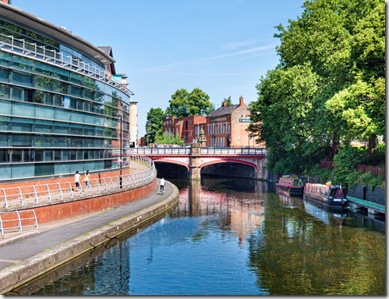 We had a full day ahead to reach the nearest water point and pump out - 9 miles distance but containing 15 locks - it'd take around 15 minutes by car, but took us about six hours!  We were fortunate that another boat was passing just as were setting off, so we shared half of the locks with them before they moored up, worn out, mid-afternoon. 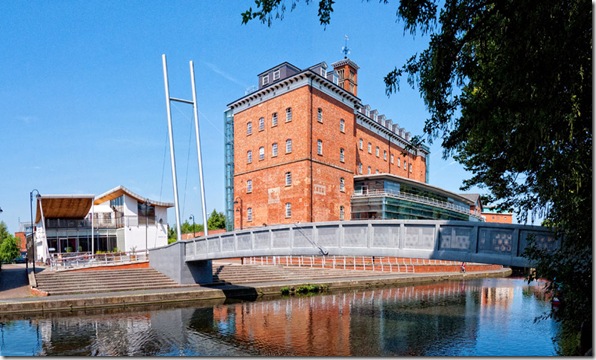 New canalside restaurant and office block opposite the moorings 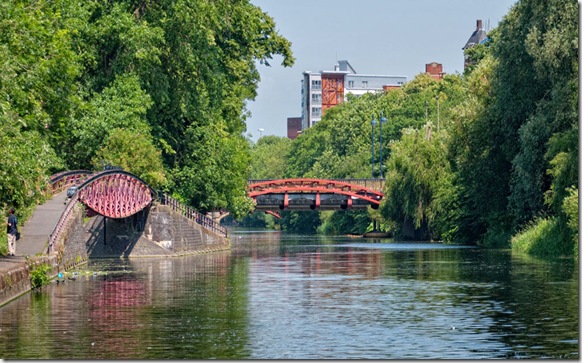 Looking back along the 'Mile Straight', south out of Leicester, where boating regattas are held 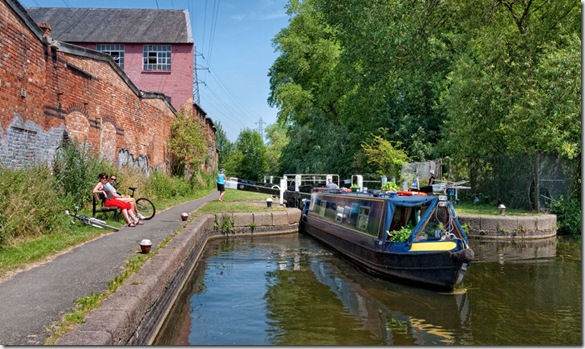 We shared most of the locks with narrowboat 'Heron' 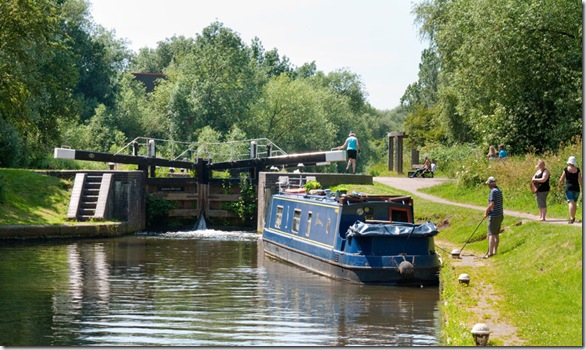 Yet another lock - Sandra walks along (on the right) to assist 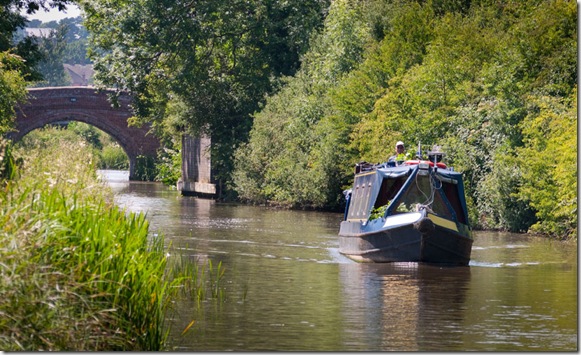 Narrowboat Heron - they've been on the waterways since end of May too, and plan to stay until the end of August - their mooring is on the Leeds/Liverpool canal west of Wigan 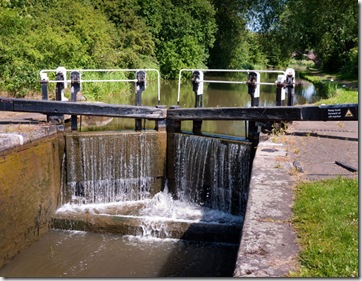 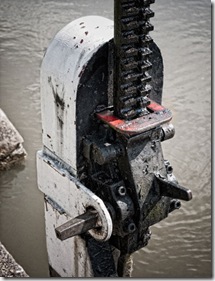 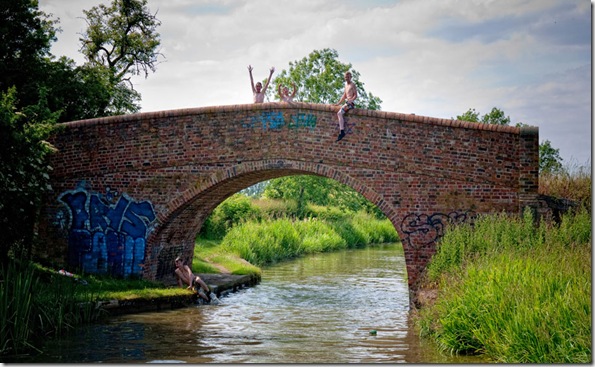 It was a scorcher - and these boys were making the most of the canal - even jumping in from the bridge the crazy things! 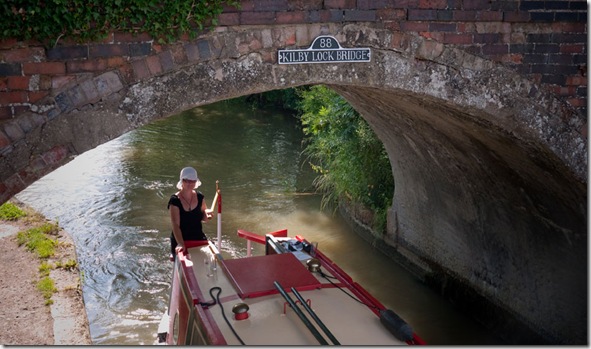 Sandra in her new hat - time to swop lock and driving duties!

We arrived at the BW facilities at Kilby Bridge around 1730hrs on Monday evening - there we found not one but TWO water-points - they're like buses aren't they, you wait for ages for one and then two turn up at the same time!  Ah well, no harm done, we filled up with water and pumped out before mooring up for the night.  There weren't any BW launderette facilities though which was sad but not unexpected, so it was time for a bit of hand washing as it can dry happily in the warm overnight air in the bow. 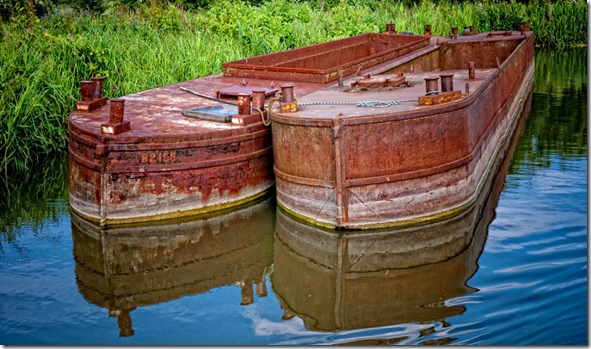 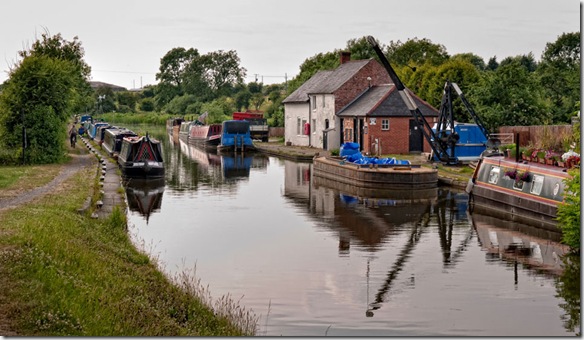 On Tuesday our mission is to get some diesel - another eight miles and twelve locks to the closest place at Debdale Wharf Marina.  We fancied going to check out the 'Wistan Le Dale Model Village' in Wistow on the way, but it's open every day except Tuesday - isn't that ironic?! 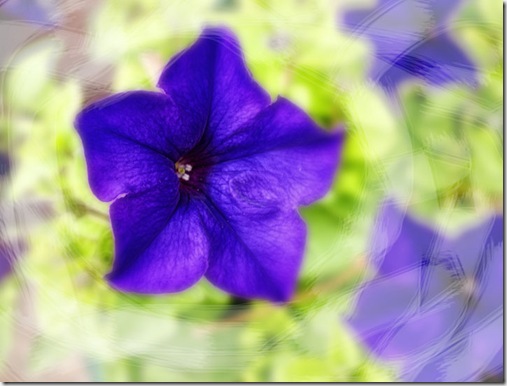 A cool purple petunia (I think!)