On Saturday, as we continued up the Erewash, we discovered that the Long Eaton carnival parade was taking place that afternoon.  We couldn't decide whether to stop and watch it or not, so carried on towards our destination of Ilkeston so that on Sunday, Fathers Day, we could get the bus to Derby for the train to Birmingham to then get to my mum and dad's near Droitwich for Fathers Day on Sunday.

If only we'd chosen to stop for a while to watch the parade ... 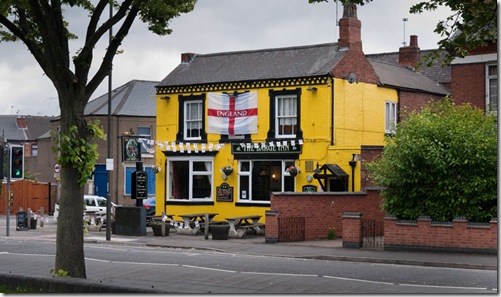 'The Barge Inn' along the way - great name for a pub by the canal!

Just before the next lock we were accosted by an extremely old and decrepit boat and it's equally attired owner asking if we had any jump leads as his battery was flat.  Well as the law of karma goes, what goes round comes round and as we'd been so kindly assisted last year when our starter battery was dead we tried our best to help - well Barry did, I just held the bow rope in place while they used all sorts of different leads and wires to try and mend his ailing boat but to no avail.  After about an hour the task was abandoned and we moved along - hope he finds a solution bless him. 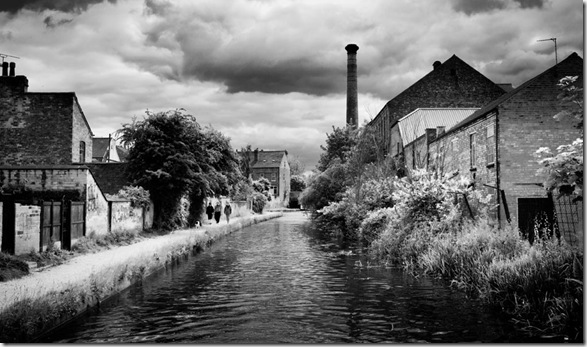 To get to Saturday's destination we had eight locks to work and each one was a challenge - but we had plenty of time so it wasn't a big issue.  We did stop just above Long Eaton Lock and watched the carnival procession - Barry hasn't seen an English carnival before and said he'd wondered why they were holding it in June as they have one in Gisborne in December - of course it's due to the reversal of seasons in each hemisphere! 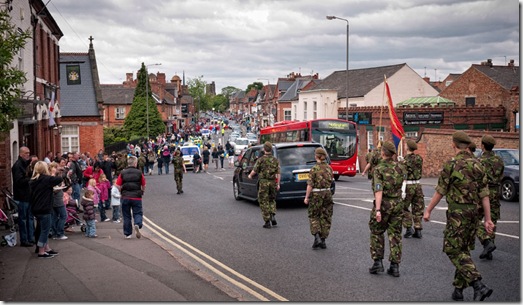 Towards the end of the procession - with military precision 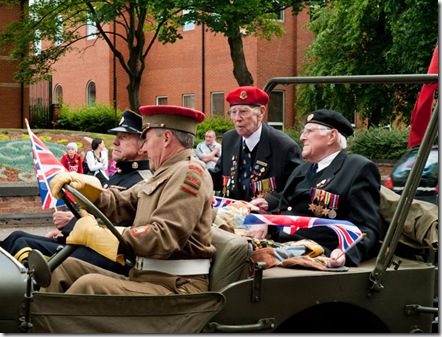 We also found the most humongous ASDA - I so forget how overwhelmed I get when I'm in these superstores - it took ages to do a few days grocery shopping as I walked each aisle in awe of the vast ranges of anything you can think of.  It was wonderful and frightening at the same time - people who use these places frequently probably couldn't imagine having only a couple of choices of brands of each thing as we do in Gisborne; and realistically that's all you need!  However, having so much choice has its advantages as there's so many bargains to be had - we had a trolley full of food and stocked up our cupboards and fridge but spent less than ninety pounds - amazing!  But I couldn't do it every week it'd drive me crazy that there's so much 'stuff' to choose from. 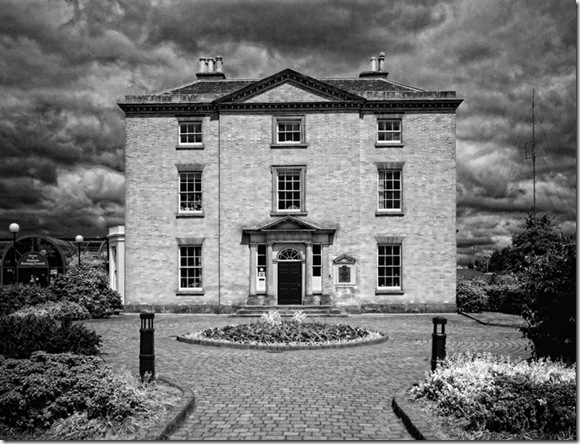 En route to the supermarket - possibly the Council Chambers?

The locks on this canal (of which there are more than one for every mile), are backbreaking!  They're all double locks with very rickety old gate paddles - even Barry had trouble opening some of them when he came to my rescue!  Less fit people would have no chance of negotiating them, no wonder few people come up this way.  But what a shame, because it truly is an adorable journey with some very friendly people along the way, and all admirably clean and tidy. 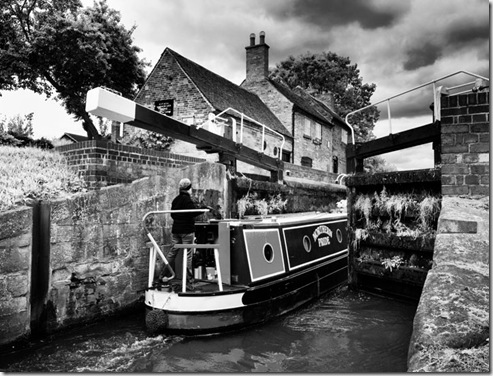 Steering in gently trying not to open the other gate ... 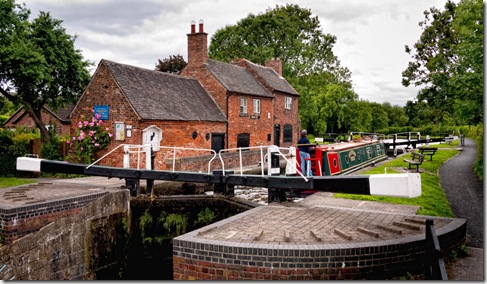 Sandiacre Lock where a sign on the cottage says 'E.C.P. & D.A.' - Erewash Canal Preservation & something or other (not sure) 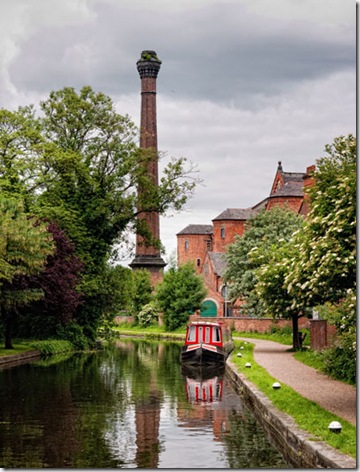 This could easily be a scene from a bygone era ... 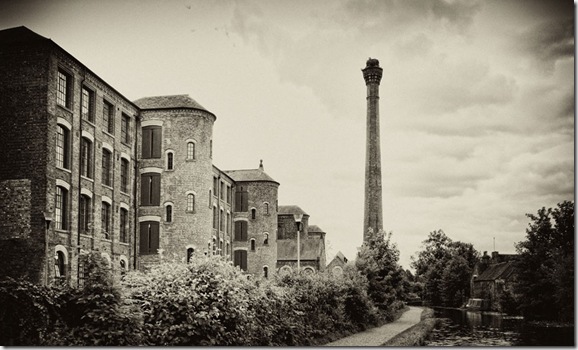 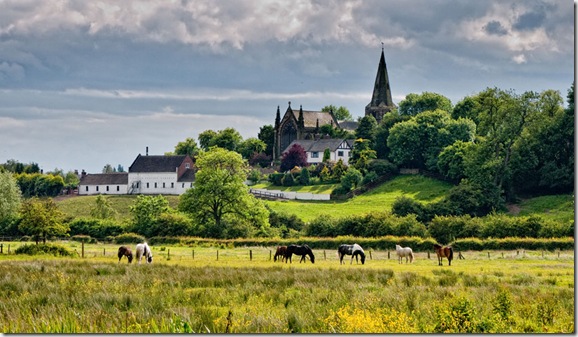 The early evening sunlight dapples the meadow with a golden glow, and the outskirts of Sandiacre in the background 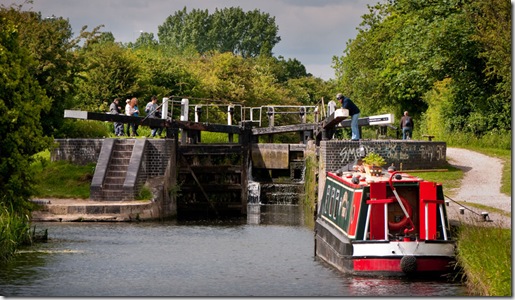 Stanton Lock - with some young and very helpful gongoozlers 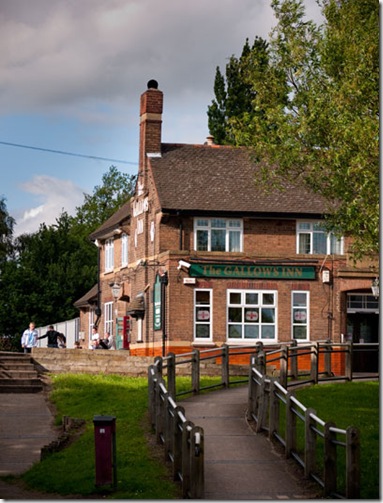 Right next to Gallows Lock - Gallows Inn - you wouldn't want to hang around too long here!

We reached Ilkeston late in the evening and moored up close to the road bridge that would lead us to the bus stop on Sunday morning.  Unfortunately we missed the opportunity to fill up with water whilst in Sawley and hadn't appreciated that the only place you can get water on the Erewash canal is right at the summit in Langley Mill - so we were getting a little desperate by now - we still have water but we're not sure how much and the drinking water is running low.  How on earth have we managed to be on the canals for so long and not realised the importance of forward planning such necessities - obviously we've just become much too laid back! 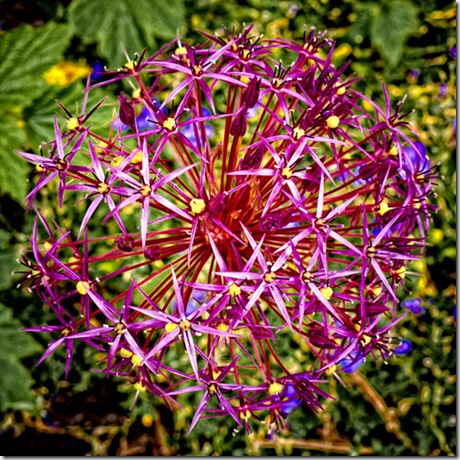 Have you ever seen a flower like this?  Any idea what it's called?  Looks like a firework exploding!  Awesome