A novel day out with a literary legend

Apart from loving being on the canals and living a fairly simple life with few possessions, it's amazing to be able to discover fascinating information that you never knew before, about people and places.  If you'd asked me previously to tell you about D.H. Lawrence, I could only have said that he wrote Sons and Lovers and Lady Chatterley's Lover.  Until Tuesday I hadn't realised what an amazing life he led, in just 44 years, and the enormity of his literary prowess. 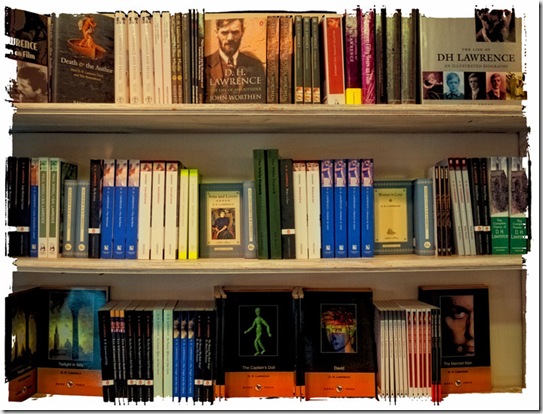 Just a small selection of the thousands of works of D.H.Lawrence

We visited the Birthplace Museum and Heritage Centre, all for one admission price of £2.50 each.  The ladies in the museum were awesome - they obviously love D.H. Lawrence and were a mine of information, enthusiastically imparted to all visitors.  He was born at home and lived at 8a Victoria Street, Eastwood, for the first two years of his life.  The house hasn't been substantially altered since those days in the late nineteenth century, and they've attempted to furnish it authentically and done a marvellous job. 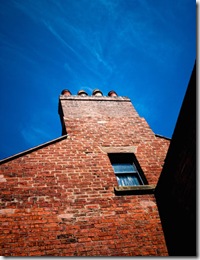 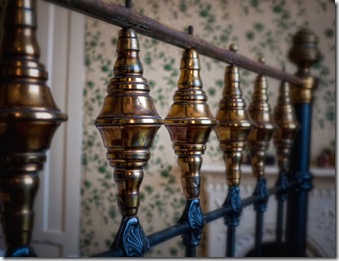 D.H.Lawrence's birthplace - Barry forgot to take one of the front of the house!

'Bert' had been a sickly child and his mother didn't expect him to reach infancy.  He managed to survive against the odds, and his mother doted on him, the fourth of five children and youngest of three sons.  Most children in that era (he was born in 1885) were sent to the coal mines from the age of 13 or younger, but Bert gained a scholarship to Nottingham High School hence continued his education subsequently training as a teacher. 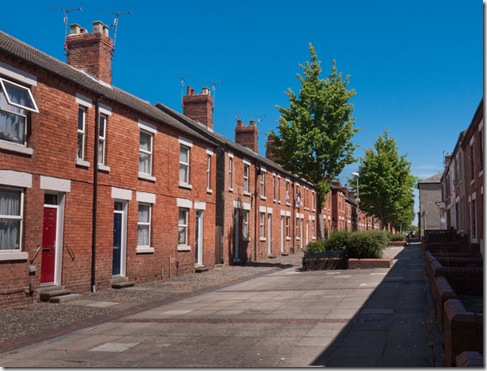 A predominantly coal-mining town, terraced houses were built for the workers in rows and squares

At a meeting with one of his professors, Lawrence was introduced to his wife, Frieda, and they were instantly attracted to each other, so much so that she left her husband and three young children and returned to her native Germany where Lawrence joined her and they eventually married in England in 1914.  They had a passionate and fulfilling relationship, despite the pain that would've been caused due to abandoning her children.

He wrote thousands of letters, poems, short stories, novels and plays, and even painted some fabulous pictures which are on display at his birthplace.  Of his most famous works, 'Sons and lovers' is semi-autobiographical and 'Lady Chatterley's lover' was self-published 2 years before he died in 1930 at the age of 44, and he made around £1,000 from this.  Having been extremely poor for most of their lives together (albeit with rich and generous friends), this was an enormous sum of money.  The novel was banned from Britain and America and only published here following a court case in 1960!  Such puritans!  Due to this he's been known as the man who wrote 'dirty books', but he was so much more than that.  He was way ahead of his time, believing that love and sex were more important than intellectual and industrial concerns, and he travelled widely in a time when most of his peers didn't even leave the town they were born, living in places such as Germany, Australia, New Mexico and Italy. 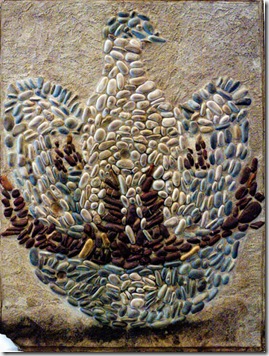 D.H.Lawrence's headstone, now in the Heritage Museum - he died and was buried in Vence in France, but subsequently his wife Frieda wanted to take him to their home in New Mexico to keep him with her, so she had his body exhumed and the ashes put into a cask and asked her new lover to bring them with him when he came - he states that he threw the ashes away before leaving, but no-one knows for sure.

The sign of the Phoenix was Lawrence's symbol; maybe he felt that he'd 'risen from the ashes' of Eastwood?

I did succumb to purchasing a copy of each of his most famous works, but as they were only £1.99 each I didn't feel too outrageous!  Having been to his hometown and learnt more about him and the novels, I hope to get more out of them.

The Heritage Centre continues the story of Lawrence and is also worth a visit, but it's definitely not as friendly, informative and welcoming as the Birthplace is. 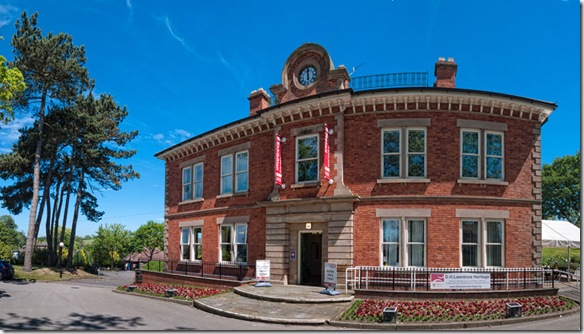 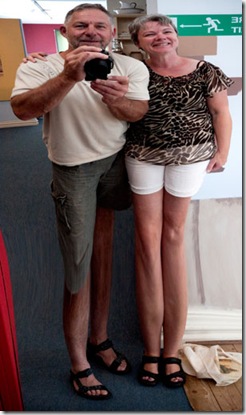 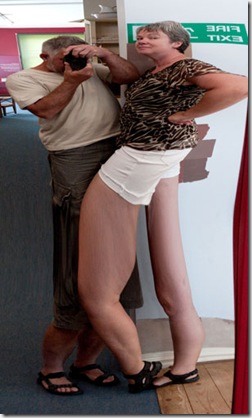 Some whacky mirrors in the Heritage Centre - talk about thunder thighs!

Following a late lunch and a drink at 'The Sun' pub, we strolled back down the hill to the Basin and had a relaxing evening in another warm summer's day, deciding to stay another night before retracing our steps. 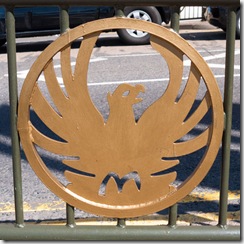 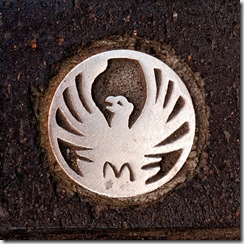 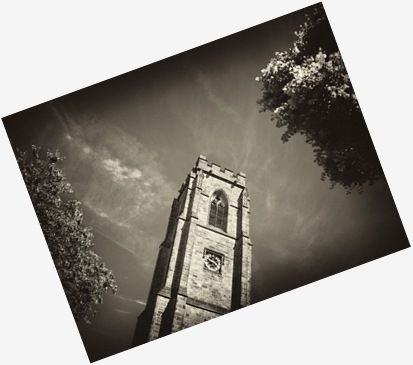 Eastwood church - the only original part is this tower 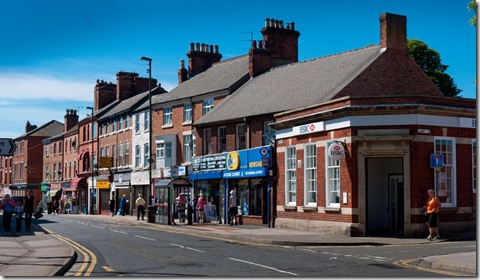 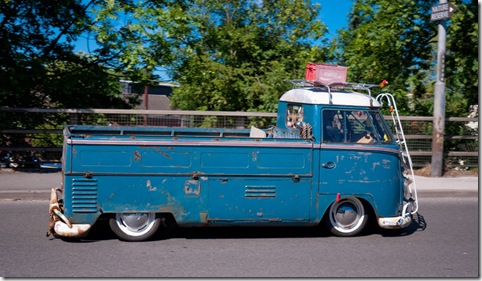 A very old van passed by, must've lost its suspension

The youths who'd been hanging around the lock on Monday night were back again and the local Bobby's paid them a visit - we're not sure why they arrived but it may have had something to do the 'litterbug' issues!  As the youths left the area later on, one of them returned for some reason, probably just to show he was 'tough', and overturned the litter bin.  The police swiftly came back and gave chase, but left the litter lying on the ground.  Ah well, most of the youngsters we've met along this stretch have been fine, and they weren't aggressive at all, just normal bored teenagers with nothing better to do, pretty harmless really. 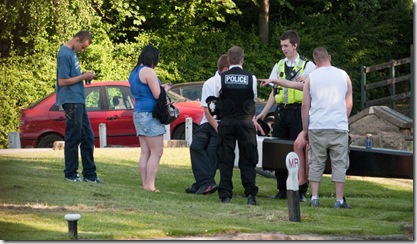 'Ello, 'ello, what's going on ere then?  The youth on the right was the one who tipped over the bin officer! 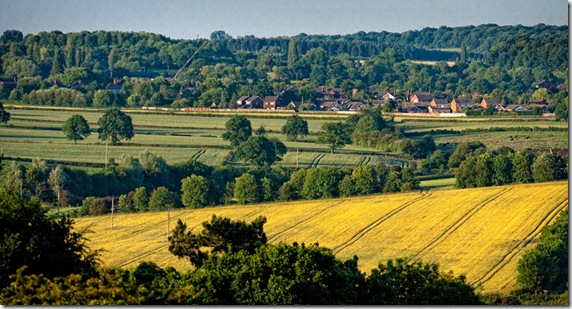 The countryside D.H.Lawrence loved so much

Eastwood on the hill

Thanks for pointing out my error Eddie - the England match is on Wednesday at 3pm UK time and the NZ one Thursday at 3pm!  So by the end of the week both countries could be out of the running ...

On Wednesday we're going back down the Erewash, heading out of the midlands, and beginning our descent south, so we're unlikely to catch the match. 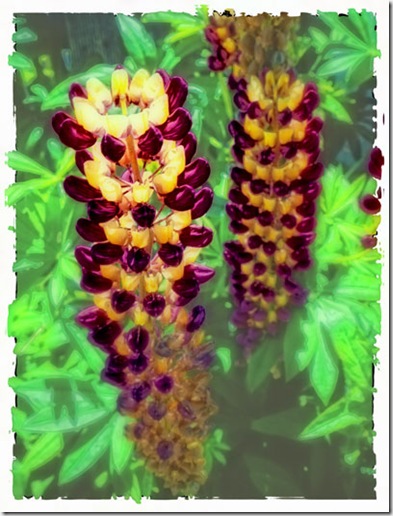