What a carry on up the Caldon...

Fred and the boys needed to be setting off for home around midday, so he and Barry formulated a plan which meant we could still get to the end of the line at Leek.  Fred left mid-morning on Barry's fold-up bike and headed back to collect his car.  Meanwhile Barry, the boys and I continued eastwards in the boat.

I think the boys were getting a little fed-up being cooped up in such a confined space, so we had a game of 'frustration'; very aptly named because it frustrated the hell out of them when they couldn't get the dice to spin a six or their player got sent back when it was almost 'home'!  But it kept them amused for a short while ...

I thought I'd better get some blogging done as we were getting very behind, but while I was writing it world war three was erupting in the cabin!  I may've turned into the bitch from hell (sorry boys!) because I couldn't take it anymore and marched poor little Alex to the back of the boat and locked him out there with Barry, keeping Tom inside the cabin with me. Shame, they insisted they weren't really fighting and it was just what boys do, but the noise level was too high voltage for my poor ear drums!

The boys take a spell on top 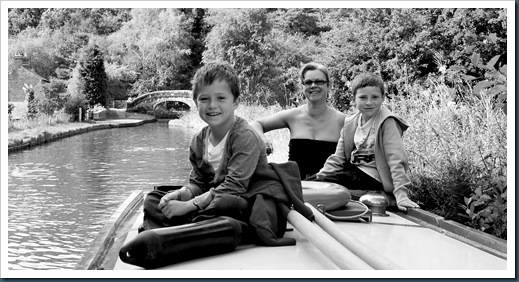 Nice way to see the countryside 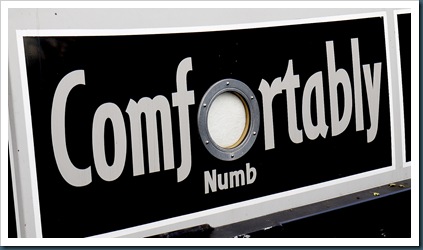 Keith, I finally found you a boat!

The left arm of the Caldon took us about an hour and a half to travel down; there's not much to see apart from trees, hills and birdlife.  Then suddenly you come to the end of the line with no warning, the canal just tapers into nothing, with an Industrial Estate on the side.  So it was a case of turning around and going back the way we'd been. We moored up and walked to the closest road ready to meet with Fred, and it wasn't long before he found us.  Bless him he'd bought us some presents - a cooked chook (aka chicken); toilet rolls; fresh bread; ground coffee; replacement coca cola (for Barry's rum!) and other bits and pieces.

We had lunch and then the boys left us in peace - it was a great weekend and we loved to have them on board, despite the shenanigans of brotherly love! 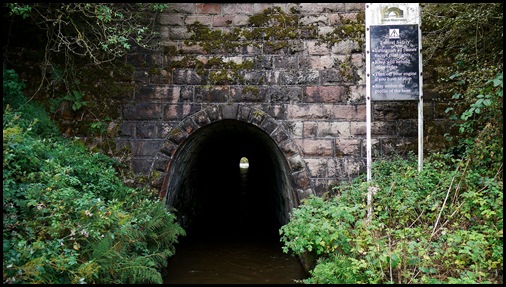 The Leek Tunnel, at 130yds long, just wide enough for a boat 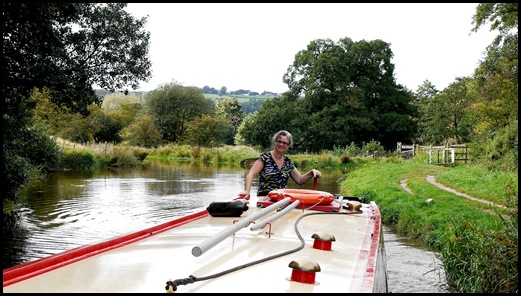 Sandra heading away from the Leek  winding hole after we dropped Fred and the boys off ... 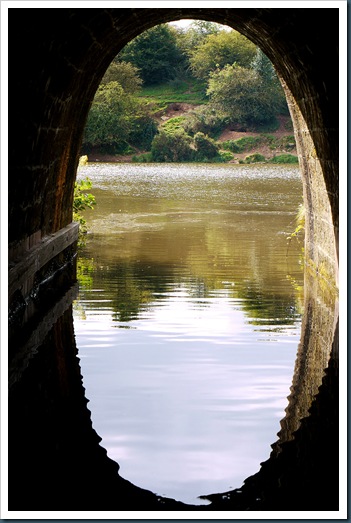 ...  and back through the tunnel 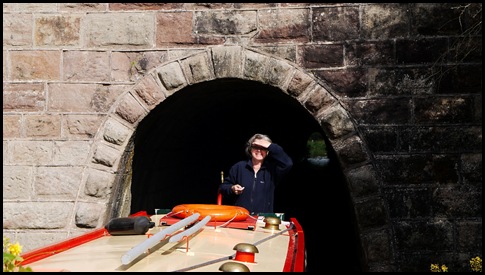 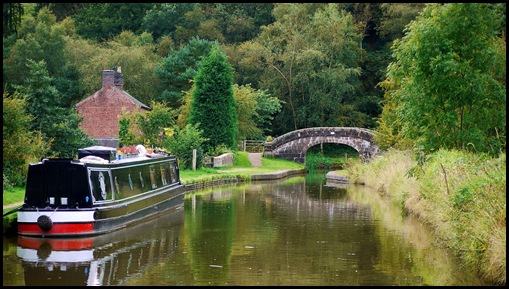 Back over the aqueduct to the Froghall turnoff

As we'd come this far, we decided we really ought to complete the other arm of the Caldon, towards Utoxeter.  So back we went to a sharp right hand turn and three locks.  At the top lock were a family of five who volunteered (or did I volunteer them maybe?!) to assist me with the locks.  Once through, I asked if they'd like a ride on the boat and they jumped at the chance.  They'd been walking towards the Holly Bush where we were drinking last night, so much to their delight we took them all the way there and dropped them off right outside.

Barry said to me afterwards, "I thought you'd had enough of children?", and I laughed and said that I loved kids really, I just couldn't eat a whole one!  Lol! 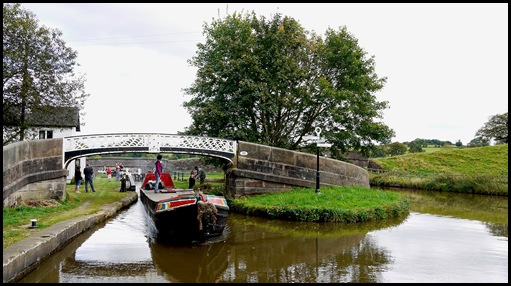 We had to wait for this old working boat to come through the lock at the turnoff, the old engine puffing and panting and beating a lovely tune! 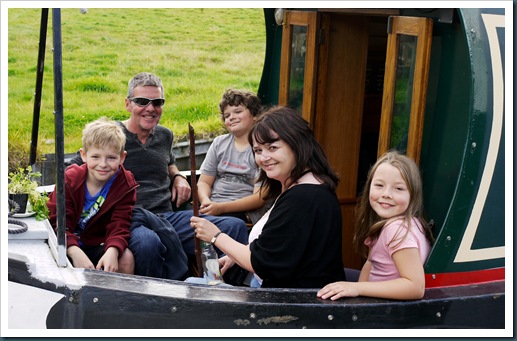 We gave one family a ride to the Holly Bush Inn for helping us with the locks: Tore, Tony, Joe, Jill and Lucy (hope we've spelt them all correctly!)

The waterwheel and mill at Flint Mill near Cheddleton 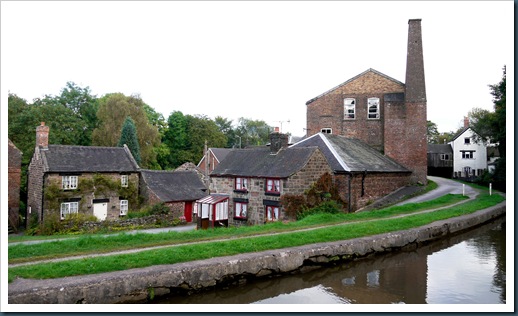 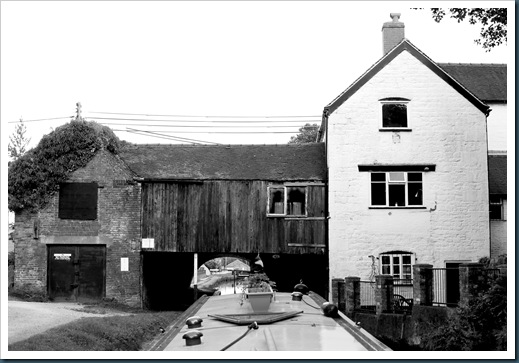 Going under part of the old mill buildings

The steam engine of the Churnet Valley Railway line

The canal joins the river at the lock for just over a mile from Oakmeadow lock to Consall Forge ... 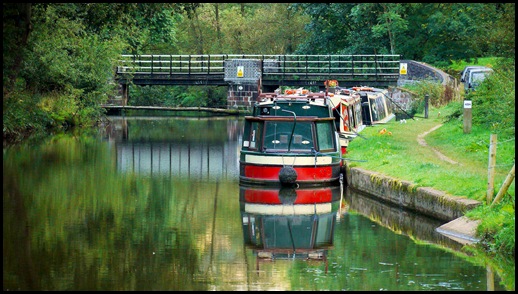 ... the weir in the background, the river becomes a canal again round to the left 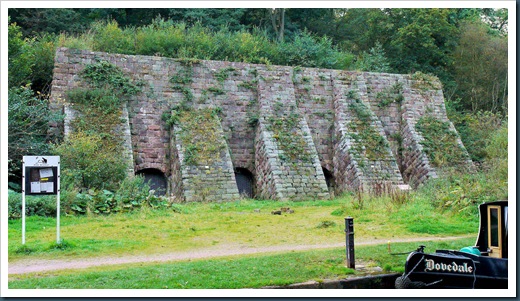 The lime kilns at Consall Forge 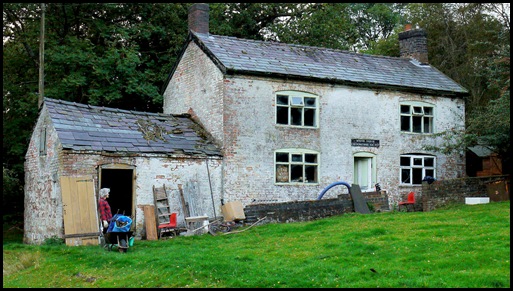 We continued along the canal, which was now eerily silent both inside and outside of the boat, stopping at Consall Forge where we met up again with Don and had a meal and a couple of drinks at The Black Lion pub.  We also got chatting to Chris and Morgan who were moored up beside us - spookily enough Chris is a midwife so Barry and Morgan had to contend with a bit of shop talk! 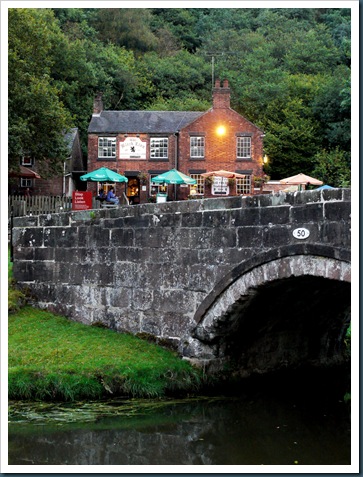 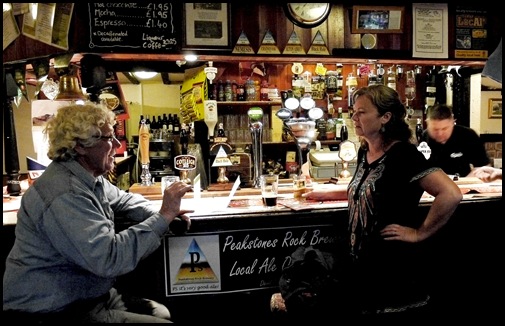 Don regales Sandra with a tale or two 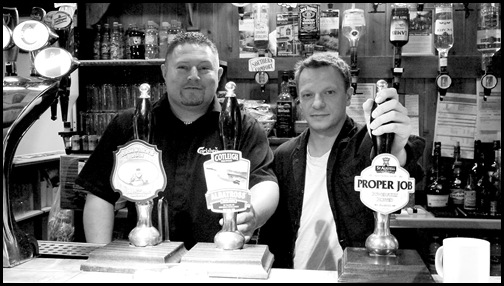 Jason, the manager, and the chef (sorry we didn't get your name!) - plenty of real ale here for Barry - a proper job! 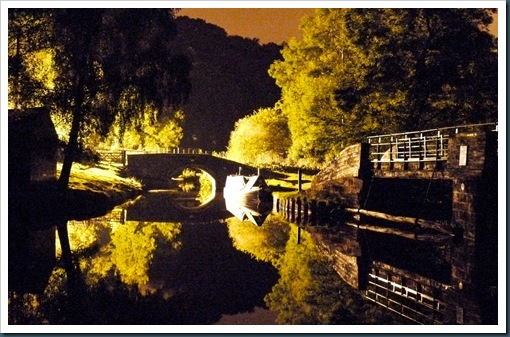