Charlie knocked on our door at quarter past eight this morning; luckily we’d woken up half an hour before in readiness for his arrival. I overheard him admitting that he'd not worked much on Barrus engines or the Mastervolt Control Systems before, so my fingers were crossed that he’d be able to work a miracle and sort it all out without us needing a replacement alternator or controller which would have cost us quite a chunk of the bank’s money!

He spent the whole morning and a bit of the afternoon rewiring the alternator and all sorts of other blokey things; eventually he gave us the fantastic news that power was restored, the batteries were charging and we shouldn’t need a new alternator. Hurrah! It still cost us for his valuable time, obviously, but nowhere near what it could’ve been so it wasn’t quite so painful writing out the cheque. Thanks Charlie (Classic Maritime Diesels of Lord Vernon’s Wharf; 07712052635), and thanks also to Peter from Braidbar Boats  http://www.braidbarboats.co.uk/ for sparing your time so readily. 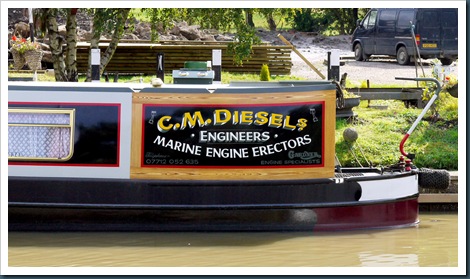 Charlie's boat sitting directly opposite us

During the morning I went for a stroll along Middlewood Way, which is a beautiful 10 mile woodland walk that stretches from Marple to Macclesfield (I only did a 4 mile round trip, not the whole thing!). Once again the weather was a mix of sunny spells and showers; it seems that this is now the pattern here, but I’m still hopeful there will be the usual 'Indian Summer' before we return to New Zealand on 3 October – especially on Saturday 26th September which is when we're getting married on the roof of Northern Pride. If the wind is blowing we may fly off into the canal! 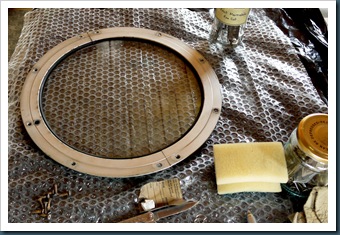 While Charlie was tinkering Barry put the new glass in the porthole - a very tight fit!

With power restored our sense of humour and love of the waterways returned, so we decided to turn around and go back to complete the Peak Forest Canal. Of course it was raining cats and dogs again and carried on doing so all the way; but at least we could put the heating on and half way there I went and had a glorious hot shower and washed my hair – I felt human again! 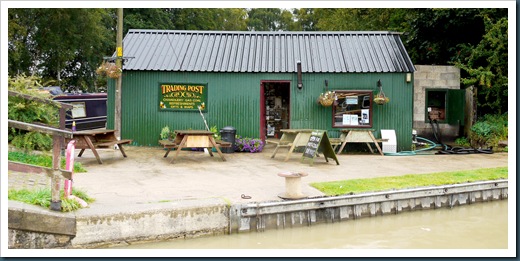 We filled up with diesel and water, after purchasing a new tap connector (Barry left the last one at Plank Lane Swing Bridge while getting water, and we've been borrowing from other boaters ever since)

It rained most of the way back to Marple, where we moored at the turn off to the Peak Forest Canal. A cosy evening with lights, warmth and internet! Hurrah!