We were relieved to see that we hadn’t been served with a fine overnight, though Barry did go and chat with the Inland Waterways Association (IWA) volunteers in the shop later that morning to ‘confess’ our rule flouting! He said that the bloke who normally enforces it was away so not to worry; phew!

After a trip to Tesco’s, we found a mooring close to the junction of Whaley Bridge and Bugsworth Basin so decided to fill up with water and move there before meeting Lisa and Rob and getting the train this afternoon. We had to back out of the spot we were in so I had to hold the pole and push us off at times. Unfortunately one of the times the pole slipped on the rocks and I fell ‘smack’ onto the metal ridge at the front of the boat on my hip bone. Ouch! Another boat injury!

Trying to make the picnic lunch whilst crying in pain, I suddenly noticed water also coming into the boat as well as out of my eyes!  Barry had put the hose into the water filler hole, then turned on the tap and left it while he disposed of the rubbish.  The pressure of the water meant that the hose came out and was wooshing around the inside of the boat like a hissing snake - oh dear, a bit of a mopping up operation required ...

A couple of Panadol later and we went and met Lisa and Rob and got the train to Buxton. It’s a lovely journey, though only 20 minutes long, but it gave us a chance to see some more of the Peak District.

Buxton is rather like a miniature version of Bath – it even has a ‘Crescent’, only about a quarter of the size of Bath’s but similar otherwise. It’s currently being restored back to an hotel, having been built by the Duke of Devonshire in 1784 to house visitors to the town’s health giving spa. 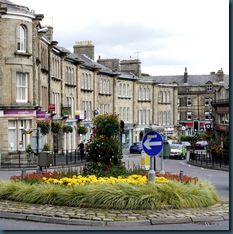 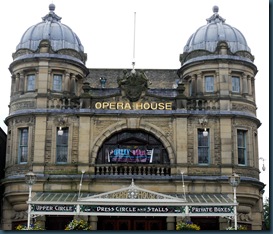 A typical Buxton street and the Opera House 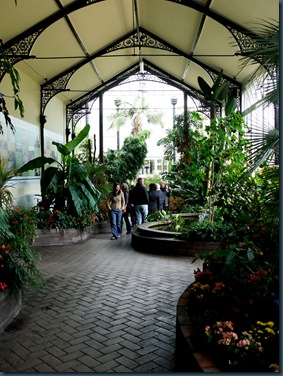 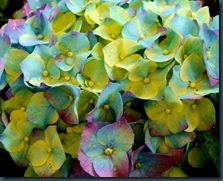 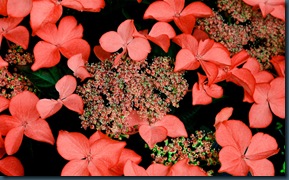 Inside The Pavilion and some of the colourful flowers

The Pavilion Garden’s was opened in 1871 and restored in 2000, encompassing 23 acres of land given to the seventh Duke of Devonshire (not sure why these Devonshire Dukes feature so prominently this far up north?!). In ‘The Pavilion’ there’s lots of information about the history of Buxton and the vast amount of money that has been spent in recent years ‘doing it up’, and there’s a wonderful collage of photographs from around the Peak District that were taken from a helicopter during the course of a day, along with some prose to describe the area. Barry was impressed so it must’ve been good! 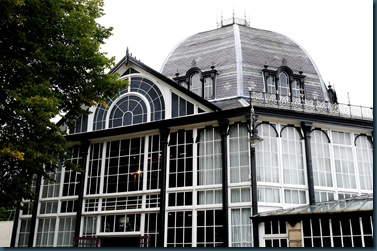 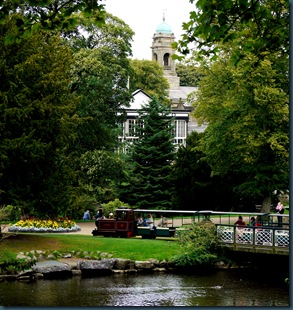 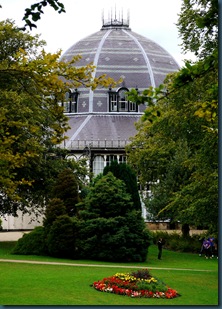 The Pavilion dome and surrounding gardens complete with train! 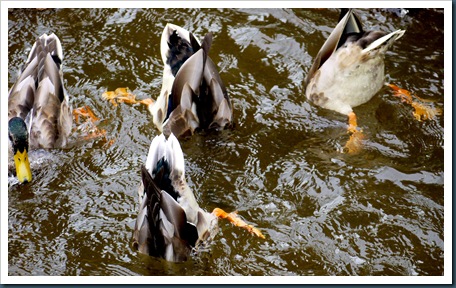 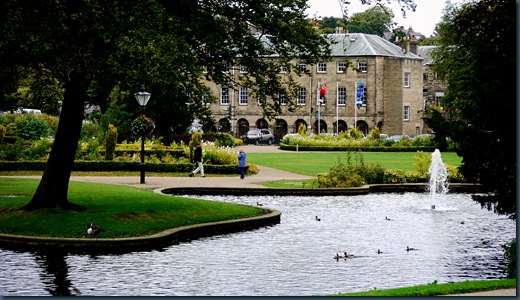 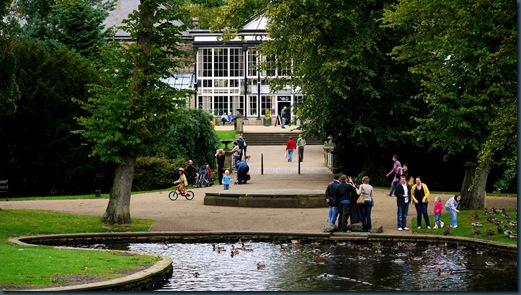 More of the exquisite gardens, lovely walk with the sound of the brass band playing from the bandstand

After more strolling around we thought we’d stop for a cuppa at a little tea shop, where Barry and I surreptitiously ate our Bakewell Tarts from Tesco’s – Bakewell is a little town in the south east of the Peak District so when in Rome … 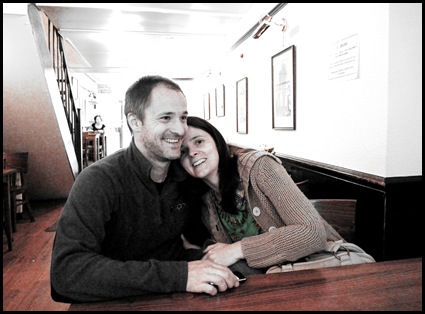 The lovely Lisa and Rob after a couple of cuppas ... 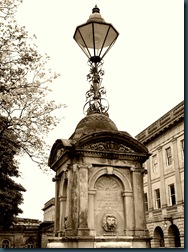 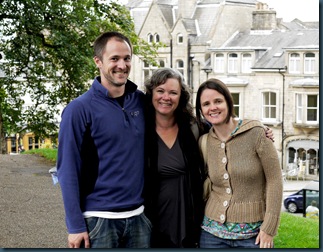 ... and following a walk through 'The Slopes' 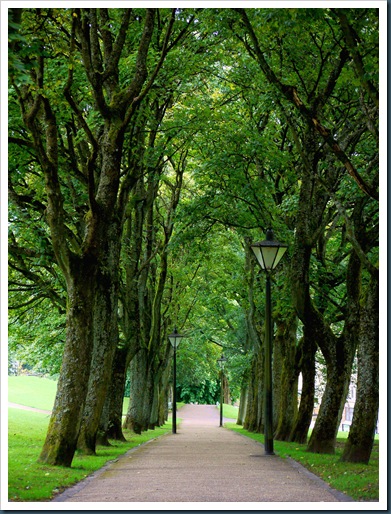 which is certainly well kept 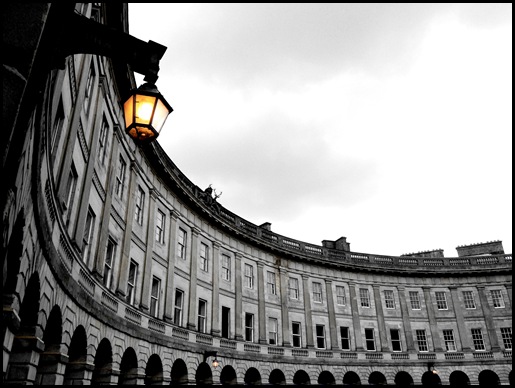 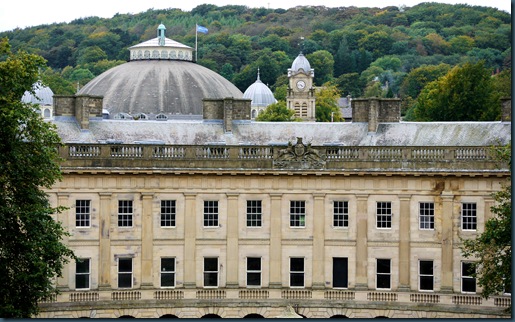 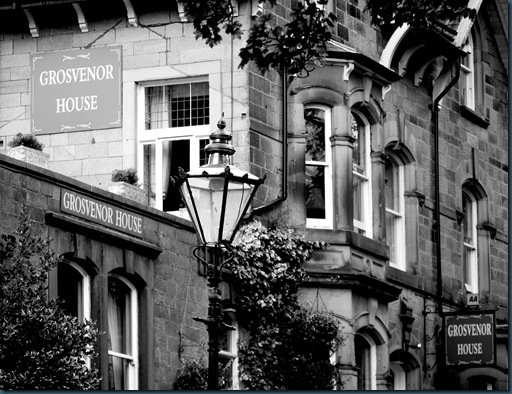 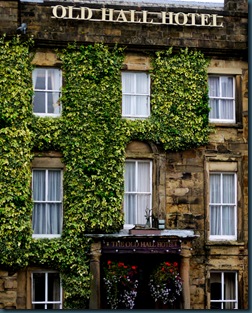 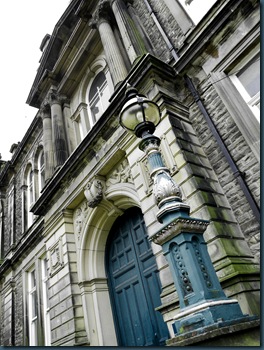 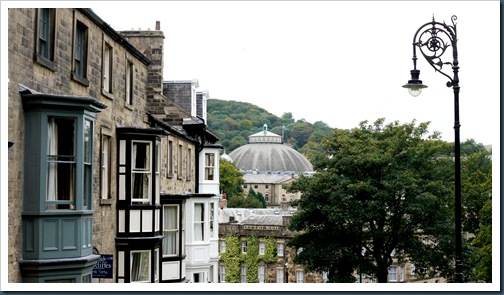 Looking back towards the dome of the University of Derby buildings 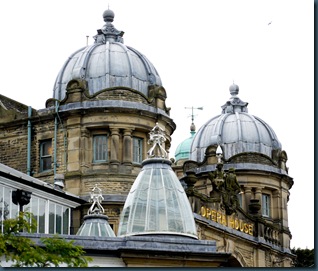 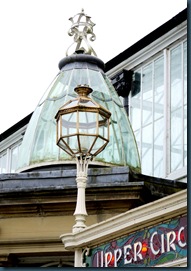 They certainly loved their domes back then! 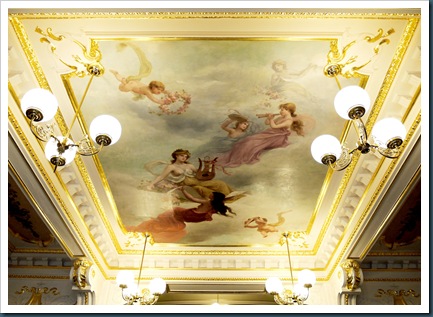 The ceiling in the foyer of the opera house

It rained a little this afternoon for the first time in 48 hours, and it's starting to get dark around 7.30pm now.  We headed back to Whaley Bridge on the 5.27pm train so Lisa and Rob could get home before dusk. It was great to see them both, even for a short time. 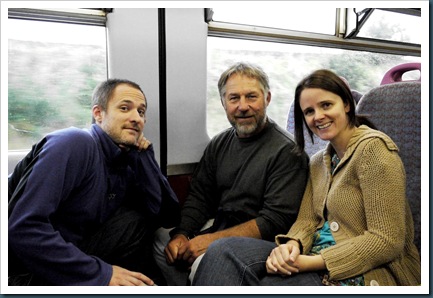 We caught the 'Last Train From Buxton'

Barry and I returned to the boat and sat on the little stone circle on the side of the canal next to where we were moored, and read some of the Sunday paper (The Sunday Times). We find it amazing that anyone can read a Sunday paper in one day, unless they do nothing else throughout the day! They‘re huge, full of supplements never mind just the ‘news’ part. It’ll take us the remainder of the week to get through it, but I feel we should find out what’s going on in the rest of the world every now and then. We can mostly avoid it living on the canals, it’s like a parallel universe where you can leave behind most 'normal' things!

However, we can’t avoid the fact that much to our distress the electrics started playing up again this morning so we’re thinking it’s gonna be a new alternator which won't be good news :-(