Stone looks like a great place, there's a lovely ambience and they totally embrace their canal setting.  There were cosy pubs and restaurants and a cute little narrowboat sat on the bridge over the canal.  The Star pub, aptly named alongside Star lock, has every room on a different level, and is in the Guinness Book of Records due to this fact.

There's a very pleasant pedestrianised High Street (though Barry missed the opportunity to take a photo!), and a good sized Morrison's and Co-op close to the canal.

Unfortunately what was marked in someone's guide as a launderette turned out to be a dry cleaner's, and the laundrette was actually in Walton about a mile away - but we didn't discover this until we'd carried two heavy of washing around the town!  I was tired due to the long day yesterday and not sleeping very well worrying about how we're going to get everything sorted before we head back to the Southern Hemisphere, and just felt like I'd had enough of this boating lark!  Bless Barry, he left me on the boat and went for a walk to the Post Office, and returned bearing gifts of chocolate from Thornton's.  He's such a lovely man, I think I may marry him!! 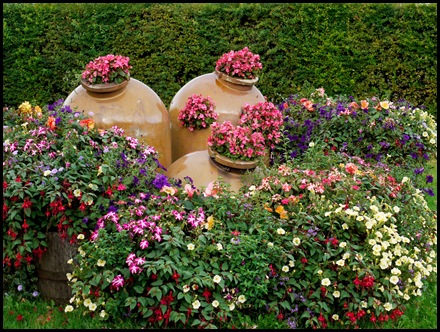 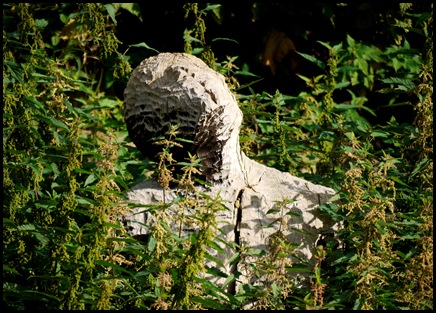 Christina Collins's sculpture by Workhouse bridge (read the story below)

Barry had been informed of a potential washing machine that fits neatly into the shower and isn't too expensive, so he went and checked it out at the nearby boatyard.  Not sure how easy it would be to use and store it, but it's certainly a thought for our trip back next year ... 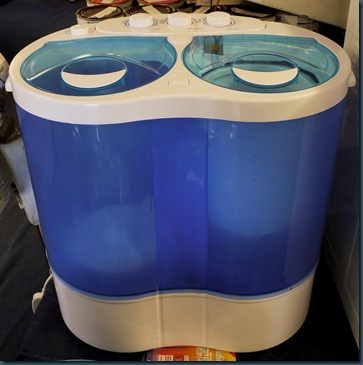 Saw a semi-automatic washing machine at the chandlery; has anyone had any experience of them? 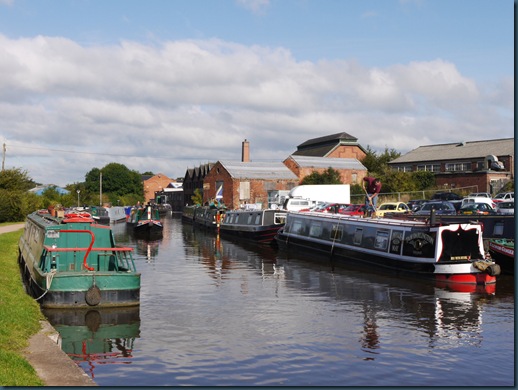 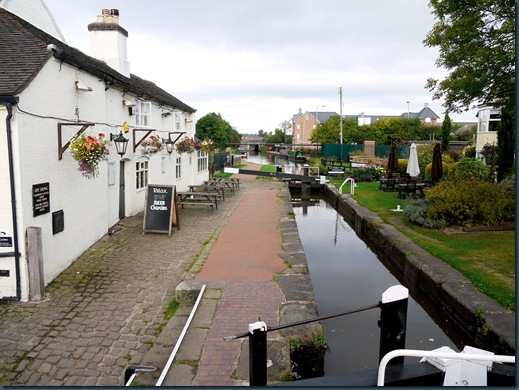 The Star pub on the left

While Barry had been away, narrowboat 'Dreckley' cruised past and called out a hello Northern Pride - "We read your blog," said the lovely lady at the front, "it's really good!"  Thank you very much said I, how lovely of you to say so and nice to meet you.  What a shame Barry wasn't on board, he could've got a photo; he's been dying for someone to say that as they travel past, or to come to the boat when we're moored up and say "Hi, we follow your blog".  We've had emails from people all over the world, and of course comments, and it's such a buzz for us when complete strangers tell us how much they enjoy the stories and photos, it makes it worthwhile spending as long as we do putting it together most days. 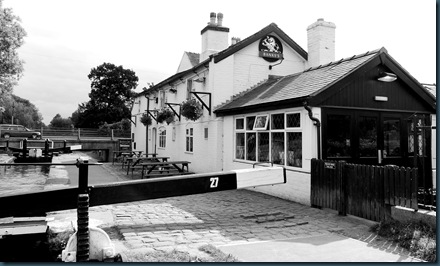 Another view - The Star pub on the right! 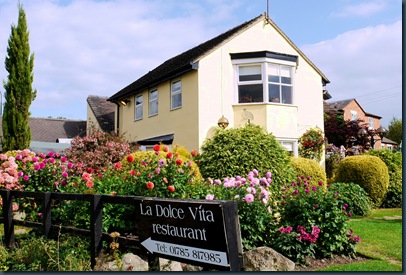 Italian Restaurant next to the lock 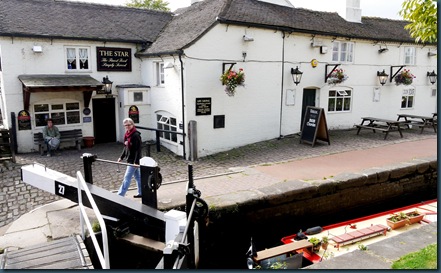 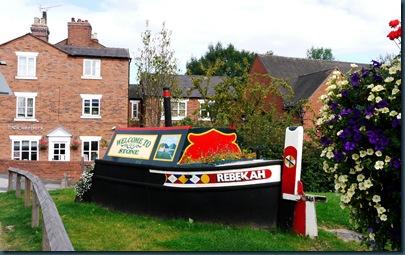 The canal follows the countryside much of the route, and the River Trent meanders alongside - though it really is just a trickle compared to the raging river at Keadby Lock that we remember so well (how could I ever forget?!). 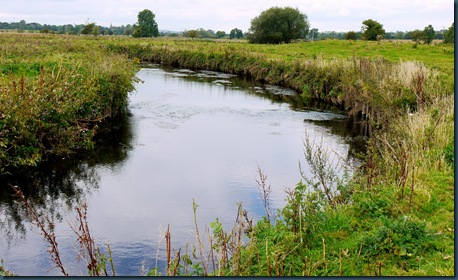 The River Trent - not nearly as fierce looking here! 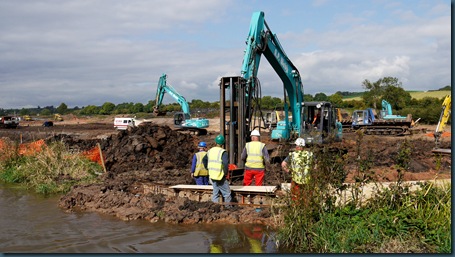 We passed by narrowboat Hadar, other fellow bloggers Keith and Joe who we'd chatted to when we were moored in Warwick a few months ago, but there was no sign of anyone around to greet. 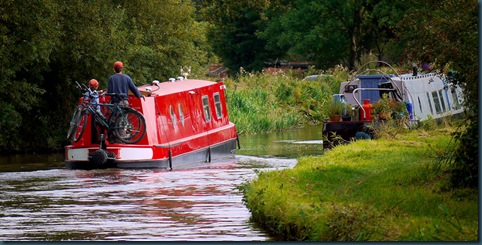 A Canadian couple who are doing the same as us, here for six months and going home in two weeks time

Thumbs up from this chap 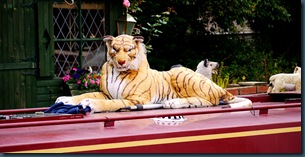 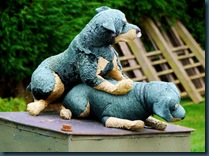 The wildlife around here is interesting! 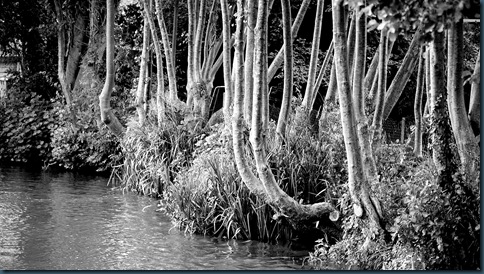 Travelling past Great Haywood I was trying to remember which boat we knew that moored up there, and realised, too late, that it was NB 4evermore.  Not sure if they're there at the moment as Kevin is working two weeks on and two weeks off.

Another long day with a few more locks, this time we shared some of them with a cruiser and it wasn't so bad.  Still a very busy stretch of water though. 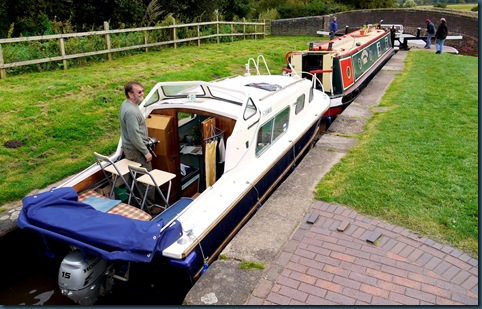 He was game to share the lock with us, though he wasn't keen to go in first

Reminds me of the way kids draw seagulls 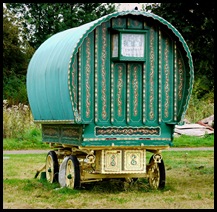 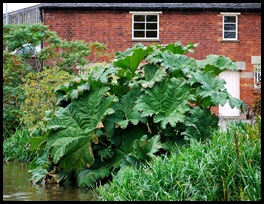 The leaves on this plant were enormous, about 4ft across

There was an abundance of boats moored along this stretch, which is close to Shugborough Hall, somewhere we would have visited if we had time.  Unfortunately though we have limited time now, and needed to get as far as possible, eventually mooring in the dark at Rugeley (or 'Ruggerley' as Barry calls it - they pronounce all the vowels in NZ!).  Our alternator had gone again so Barry had switched to another one ready to call Charlie again in the morning - bless him he's gonna love us! 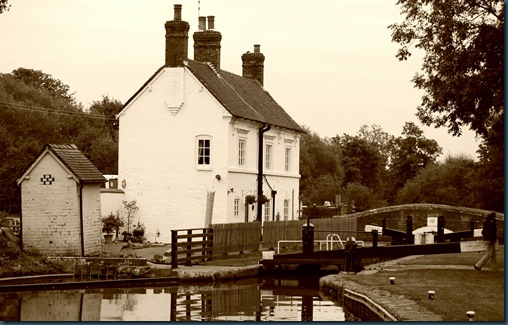 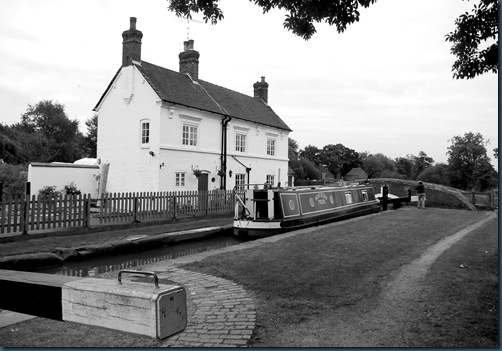 Was getting quite dark by now, and still a long way to go ...

When we connected to the internet we saw a comment from NB Windsong, yet another fellow blogger (how come we're suddenly meeting or having contact with so many?!) who told us they'd been moored up at the same place as us on Sunday evening; what a shame we didn't realise, the night at The Black Lion could've been even livelier!