Barry was up at 0630 this morning – because he was being dripped on! The porthole that he’d taken out (to measure the size of the glass to order three new panes) was leaking on him. He’d taped some cardboard over the hole about 10 days ago and I’m surprised it didn’t leak sooner considering the wet conditions we’ve been experiencing recently. The wind had been thrashing the trees about and the rain had been driving down in sheets all night, so I think it just gave up the ghost – time to get the new one in despite the rain!

Prior to that we wanted to take a look at Marple, as you don’t see much of it from the locks. It’s a charming place, much larger than we were expecting, and it had the best hardware store Barry’s found in England.  He managed to find what he’s been looking for to put onto the rear hatch to make it slide open and closed more easily – and a few other bits and pieces too! Go to http://www.marple-uk.com for some fabulous community spirit in action.  There’s a cinema that reputedly still has an interval with adverts and an ice-cream seller coming round, and I’m hoping we’ll go there on our return to the Macclesfield Canal in a few days. 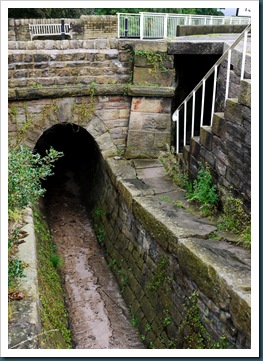 On the way into Marple we passed the lock with the two tunnels again, so thought I'd get a better shot today

Our mooring was on the wrong side of the boat for replacing the porthole, so we moved along the canal a mile or so and Barry got it in perfectly while I went for a walk along the towpath. Strangely though the same porthole taken out some days before wouldn't fit in the very same hole today, so out came the grinder - enough said. 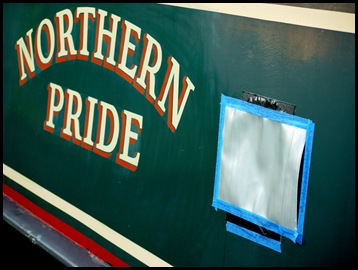 A piece of cardboard taped over the hole wasn't good enough 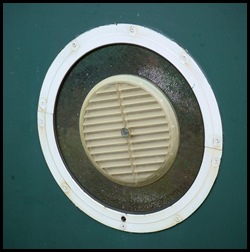 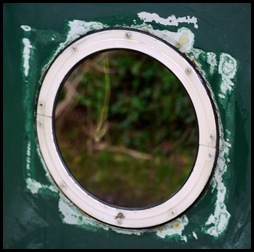 Left; These are the problem vents in the glass, very ugly and tend to cut out the light. Right; the repaired porthole - sadly the tape pulled the paint off, but it needs painting anyway!

The scenery is truly spectacular, even with the dark menacing clouds that fill the sky, and there are some amazing houses that you can see from the towpath. It’d be a great place to live and commute into Manchester; you’d get the best of both worlds, though I can’t imagine travelling such a distance to work anymore – it takes me 20 minutes to walk or 10 minutes by bike back in Gisborne, that’s far enough thank you!

We had two lift bridges and a swing bridge to go through to get to our destination – one of the lift bridges was up when we got to it as another boat was going through, so that was a relief as they're hard work! 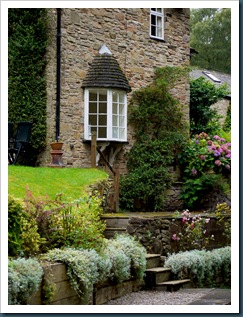 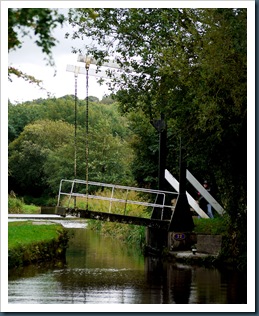 Beautiful canal side garden just by the lift bridge 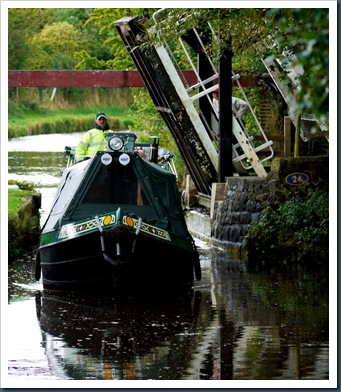 Always easier when someone else does all the work! 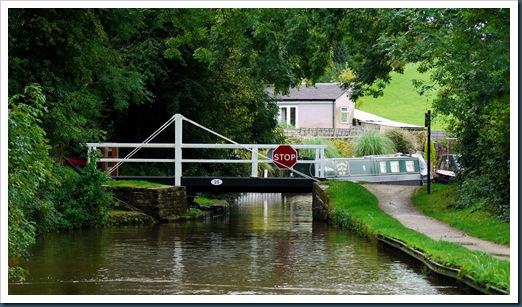 Why would you put such a bold red sign on such a photogenic swing bridge, did they think boaters wouldn't see the bridge but would see the sign - duh!

The scenery is quite stunning ...

... particularly during one of the few times the sun peeped out

We got to Whaley Bridge early afternoon but found moorings were scarce, so turned around and went to the other arm at Bugsworth Basin. The village close by is called ‘Buxworth’, apparently it changed it’s original name from Bugsworth as they thought it was more ‘desirable’!  Bugsworth Basin and Whaley Bridge are historic places - more about that tomorrow ...

There’s a railway line from Whaley Bridge that runs to Buxton, right in the heart of the Peak District, so we decided to stay in the area a few days and we're really happy that Lisa and Rob, my daughter and son-in-law, will be coming on the trip with us. Some of the boats close by, showing signs of the change in the weather!

The temperature inside the boat today was 14°C, so I can only guess that it’s been around 10°C outside, it certainly felt at least that cold.  The evening was bleak, blustery and bitterly cold, with the rain continuing through the night. There was almost a full moon that peeked through the darkness at intervals, so despite the coldness there was an ethereal beauty to the place and we look forward to exploring the area further.