Crikey, the weather was horrid today! It must be almost time to head back to the southern hemisphere for the spring and summer! There’s been torrential downpours for the majority of the day, with the occasional brief flash of sunshine. The wind blew with a definite chill, almost icy, and there's still supposedly three days of ‘summer’ left. I use the term very loosely; June was flaming but since then we’ve really not had more than one or two good days in a row. Still, it hasn’t been too bad … 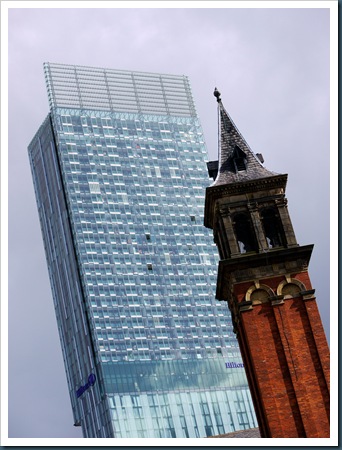 Dark clouds threatening, though a touch of sun now and again to tempt us out!

We’d already decided to make it a museum day, but had been waiting to see whether it would be a walking or bus journey to Salford Quays on the outskirts of Manchester. The bus it was! As with our previous experiences, it felt as if we were travelling at 100mph after going at less than 4mph for so long - very strange. We would’ve taken the metro-link but unfortunately it’s closed from 1-31 August for upgrading, such a shame. 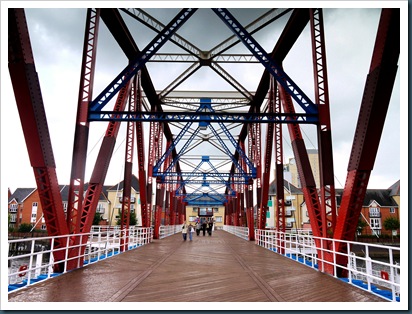 Purely a pedestrian only swing bridge across the quay 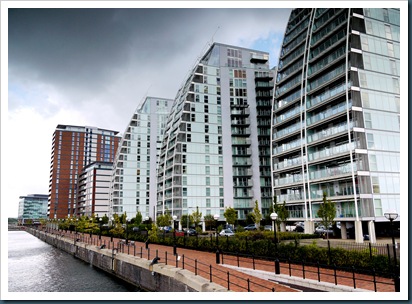 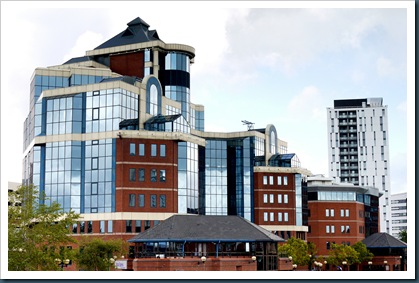 Barry wanted to see the Imperial War Museum North http://www.iwm.org.uk, and I was hoping to see the Lowry Exhibition.

Salford Quays themselves are worth going to see - they’re an amazing array of apartments and office blocks, with retail outlets and museums scattered around. The diversity of the buildings once more astounded us; there really has been an awful lot of money ploughed into this area. Of course they held the commonwealth games in 2002, so that’s possibly where the regeneration programme came from. 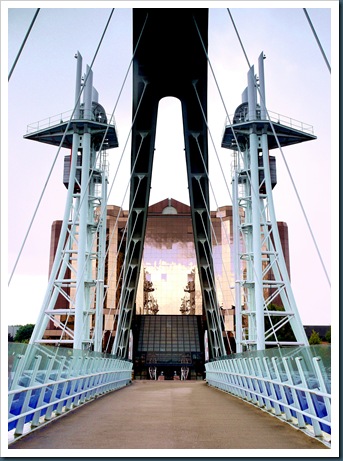 Across a very smart lift bridge that lifts at both ends to take it straight up, with 'Quay West' in the background - quite stunning even on a stormy, wet day 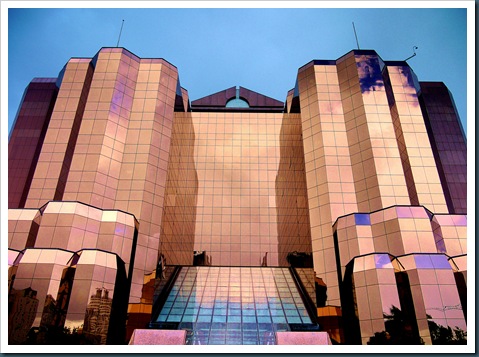 Quay West - think these are the Manchester Ship Canal's offices

After being dropped off at the bus stop we walked across the Quay to the War Museum – Barry had decided (foolishly!) that he wouldn’t need his raincoat, so got rather wet. We had to keep ducking and diving for cover on the way, but eventually entered the imposing building which is based on a globe shattered by conflict into three pieces or shards.

Entry was advertised as ‘free’, but they always get us in one form or another – this time it was “would you like to contribute to the upkeep of the museum by purchasing a guide book for ₤3.95?" Now how can you possibly say “no thanks; we’re actually quite skint, after not earning anything for months and were hoping for a freebie”?! I suppose I could’ve, but I was sucked into the guilt trip and said “yes of course” and duly handed over the cash. Ah well, it’s a good read for posterity … 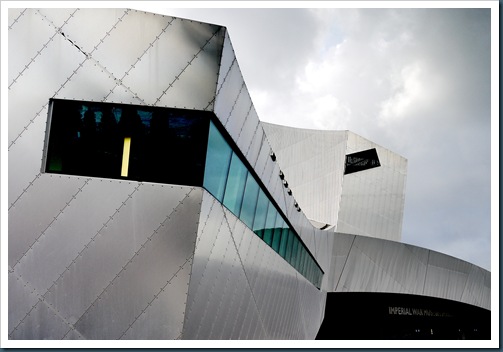 There's nothing very level about the building ... 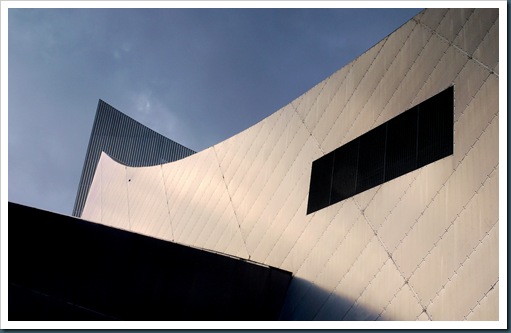 ... some interesting lines for photography though

It's a fantastic museum, and they had a special exhibition on about prisoners of war which I became enthralled by and in retrospect spent too much time in. Then in the main exhibition space it explores wars and conflicts of the last 100 years. Did you know that a hundred million people were killed in conflict in the twentieth century? The bloodiest century ever apparently. Shocking statistics.  Even more shocking was that 20 million people died as the result of influenza shortly after the end of the first world war ... 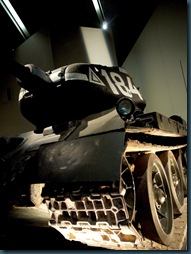 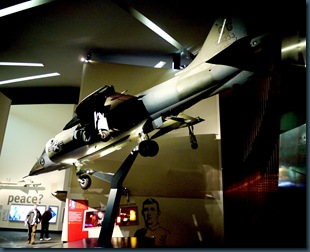 I was intrigued by the TV advertisement from 1976 which informed the people of Great Britain how they were to survive a nuclear bomb. There was a leaflet that you could pick up from the Post Office with all the details in, which were quite ridiculous now you watch it but seemed terribly real at the time, and I do remember being scared senseless by those adverts and thinking we were all going to die very soon. It was also the year that my eldest daughter Lisa was born, and I was so concerned that I was bringing a child into a world that was about to end. And here we are 33 years later …

We left the Museum late afternoon for the Lowry Exhibition across the Quays http://www.thelowry.com/WhatsOn/EventDetail.aspx?EventId=2659, and had our picnic lunch very late under cover at the side of the museum – whilst sat there we saw another gorgeous rainbow in the distance. Rain’s not really all that bad I suppose. 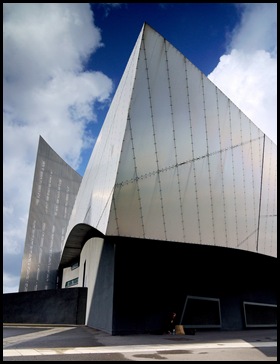 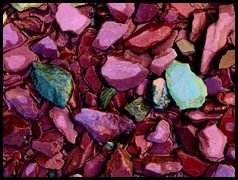 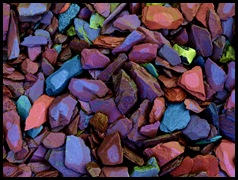 Our lunch spot out the back sitting on the concrete waiting for the rain to stop, managed to  captured some interesting shots of the gravel 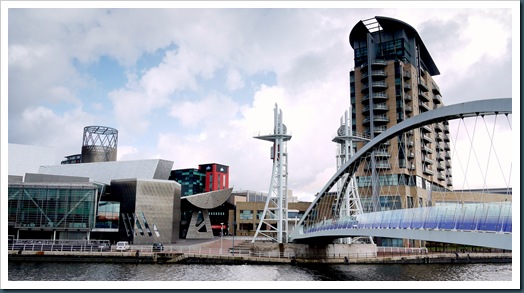 Back across the lift bridge 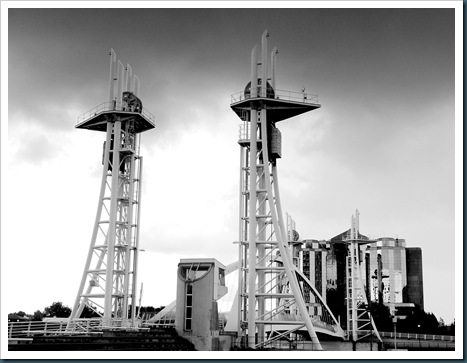 Rather a spectacular structure, though a bit of overkill since we never saw any boats in the quays at all

We got to the Lowry and watched a 20 minute film about his life before going to the entrance. Although there was a fee of ₤5 to pay for us to get in, I so wanted to see it I was willing to pay it. Then we discovered it was just about to close! It was already 5 to 5 so we couldn’t go in! I was bereft! Devastated! Maybe we’ll travel back over the next couple of days, but I doubt it. Ah well, you can’t see everything. 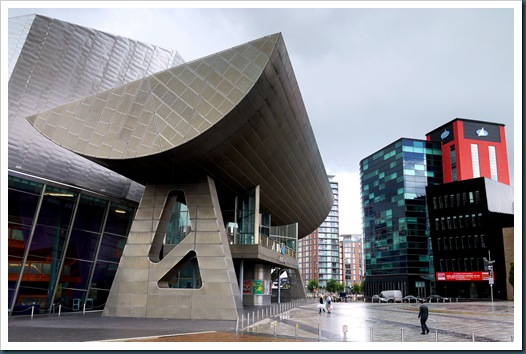 The Lowry Centre, includes the gallery and a theatre 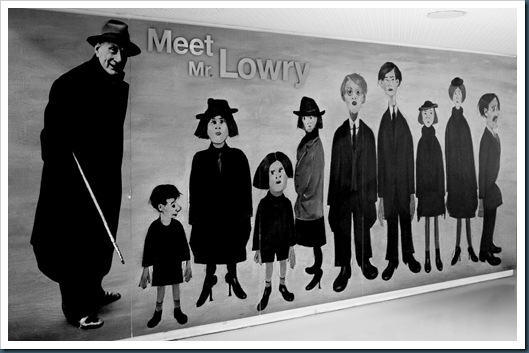 Mr Lowry with one of his famous paintings 'The Funeral Party' 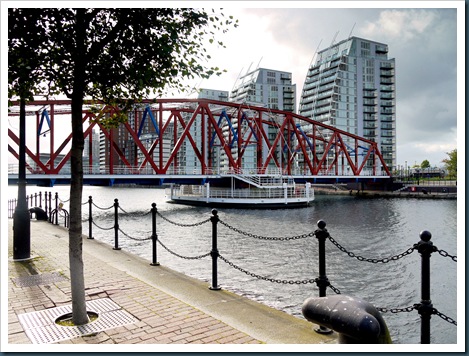 Back along the quayside 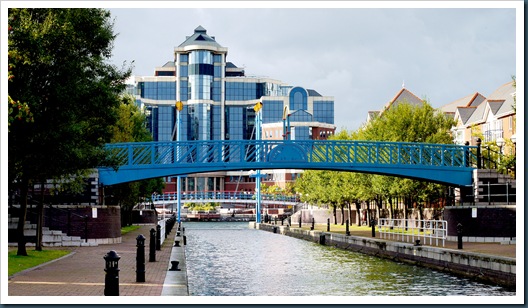 Another canal but still no boats; what's going on??

How can there be so much water, so many moorings and yet no boats

Back into town and a bit of grocery shopping, before a quiet night in out of the cold and wet external environment.  Manchester Pride Parade tomorrow, how exciting!