Today’s weather was pretty dire in places with intermittent pouring rain, and, prior to setting off on the incredible lock challenge, we had a huge hailstorm which delayed our start until just before 12. As we'd been told it would only take about three and half hours to do the locks, with the assistance of the lock keeper (as suggested in the Nicholson's Guide!), we thought we'd have plenty of time to get to Wigan for Lisa's train at 1840hrs. 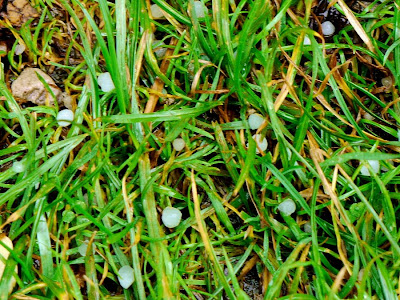 So much for that predicttion! The lock keeper was a nice enough man when I walked down a few locks to meet him earlier in the morning, and he suggested he'd be out to assist us by setting some of the locks when he heard our engine running; but when it came down to it we'd done about five locks before we saw him again and then all he did was close one gate behind us and continued assisting another boat going up the flight, as that would’ve taken him back to his office so reasonable enough. Bless him, he can't help everyone. 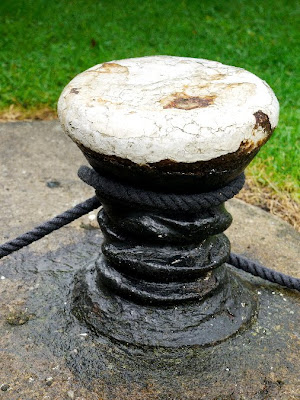 The bollard at the top lock after years of rope burns 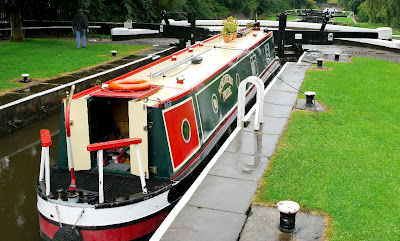 Into the top lock and the long descent commences ...

The lock keeper's hut; but where was the 'helpful' lock keeper when we needed him? 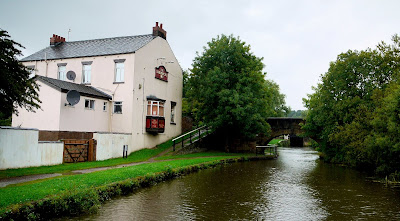 Past the 'Commercial Inn' pub 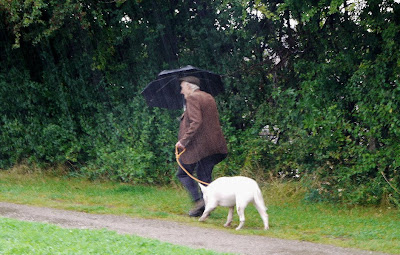 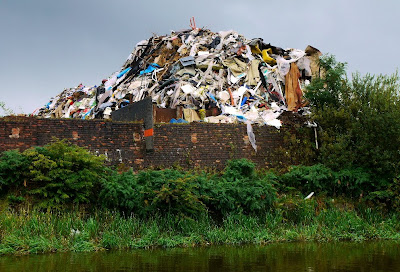 At least the rubbish was only 'by' the canal, not in it this time!
.
As we'd passed a boat ascending the flight, we were hopeful that the remaining locks would be in our favour - no such luck! The lock gates were so leaky that by the time we got to the next one it had almost emptied itself and only two were nearly full out of the next 17! So we had to fill and then empty most of them all the way down ...
.
Ah well, Barry and I found a sort of system which worked to a fashion, but each lock was slightly different so we had to be very flexible. I’d cycle down to the next lock while Barry was sorting out the one before. Then as he drove into the lock, I’d bike back up to the last one to close the gates and then cycle to the one after Barry to start that one. I don’t think I’ll be able to move my arms tomorrow, I feel completely locked out! 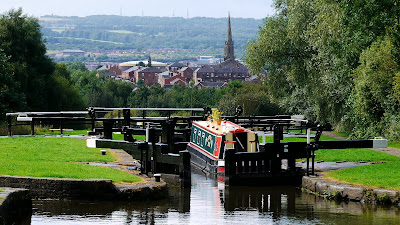 Looking down towards Wigan; not even half way there yet! 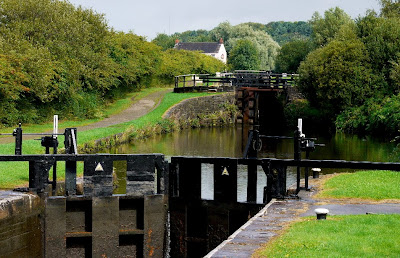 One after the other constantly 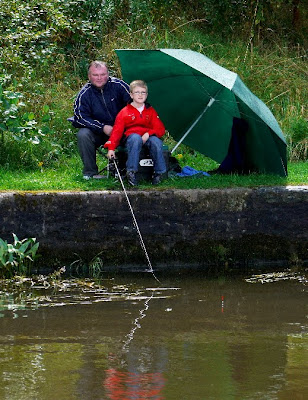 Father and son having a bonding day fishing 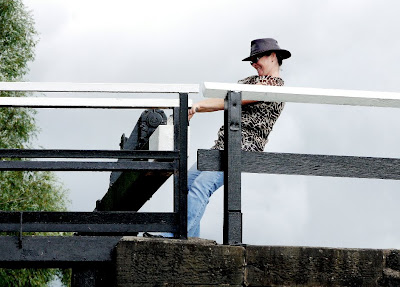 Heaving the gate closed,teeth gritted; some of them are really hard to shut 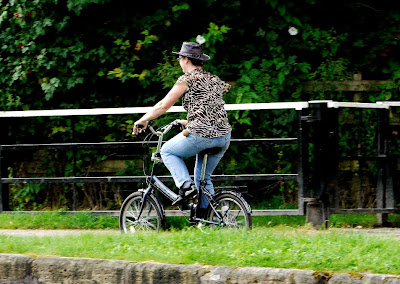 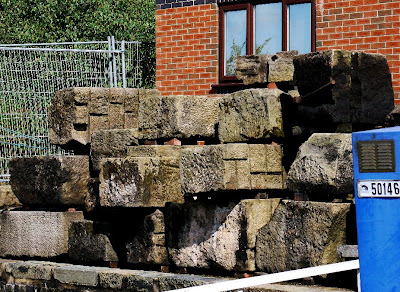 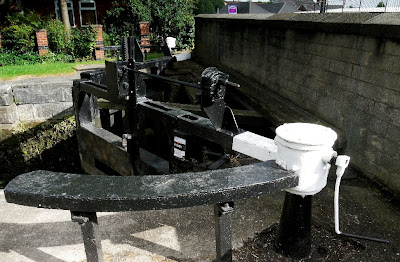 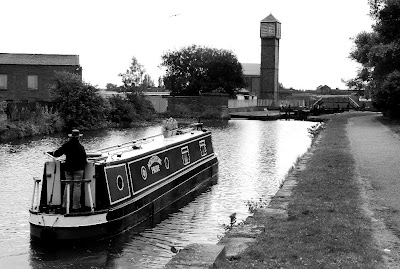 After a change of soaking wet jeans and a lunch stop, could we be nearing the end yet? 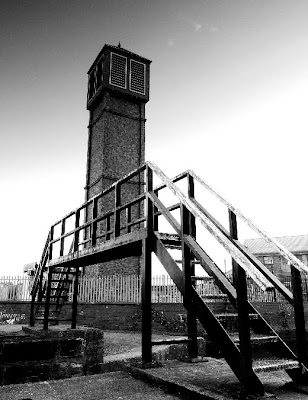 This striking tower dominates the canal at lock 79 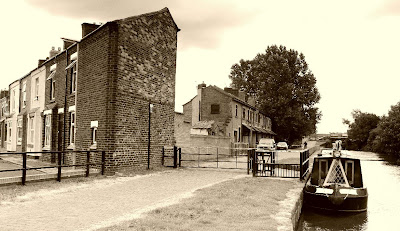 Unusual end to this block of houses 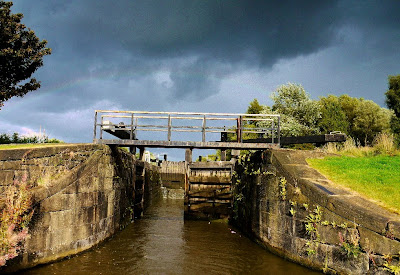 Is there another shower coming up? 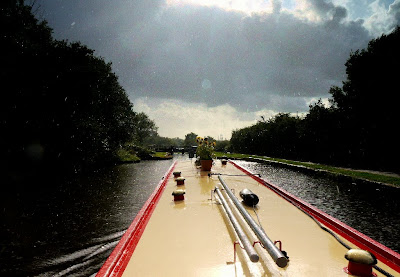 Will there be sunshine after the rain?

In between the downpours, there were some episodes of glorious sunshine, and we also had a mixture of both bringing with it two stunning rainbows; at one stage there was a triple one – awesome! 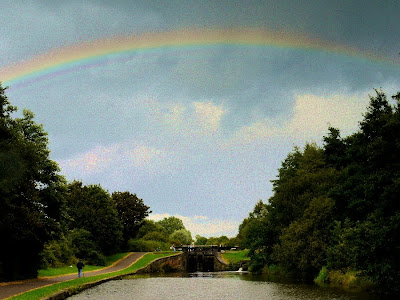 And then came the mixture which brings a magnificent rainbow 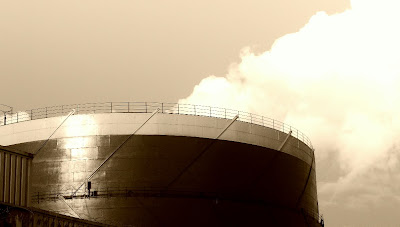 Huge storage tank at the bottom of the flight
.
It actually took us, all in all, over six hours to complete the 22 locks that took us to our overnight mooring in Wigan. Barry got on the bike to collect Lisa from the railway station just a few minutes late. 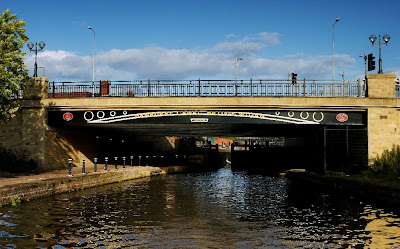 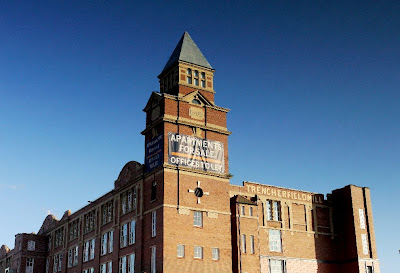 Trencherfield Mill - now being converted into offices and apartments like most mills in the north, but still has an engine shed and the largest working steam-powered engine in Europe which is fired up on Sundays, heralded by a loud blast of the stream whistle

Lisa’s on board now and having a weekend of photography as she picks Barry’s brain and learns some secret techniques to improve her picture taking. I’ll just be mum, lock woman and galley slave I think! 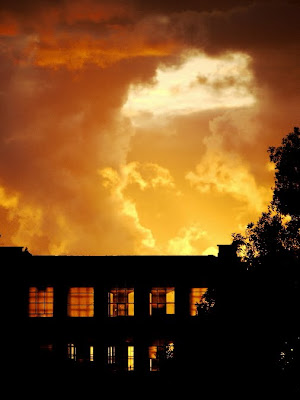 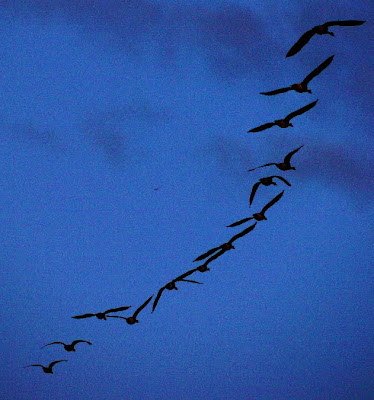