Back blogging after a wild weekend off!

I’m back on board the boat now along with my eldest sister, Kath, following a funtastic hen weekend. My two amazing daughters did the most incredible job of organising the whole thing, ‘tasteful not tacky’ was the theme - thank goodness! Lots of lovely food, drink, frivolity and treats with female family and friends. A teeny weeny bit of squeemishness at the tiara, sash, feather boa and magic wand; but you can’t have a hen weekend without the hen being noticeable can you; otherwise what’s the point?! 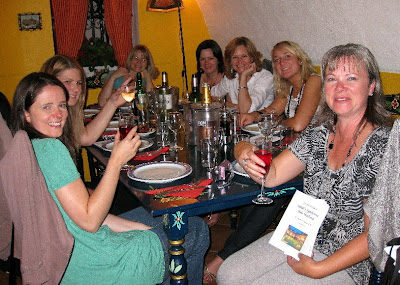 Being presented with the weekend's programme - 'Sandi's Spalicious Hen Weekend'
We had a tapas meal on Friday night, a spa at the baths on Saturday morning including a gift of two relaxing treatments (one involving steaming hay and the other hot oil!), some games on the Saturday afternoon, a Greek meal and a bit of a boogie Saturday night, and a shopping expedition on the Sunday. Absolutely fabulous!! 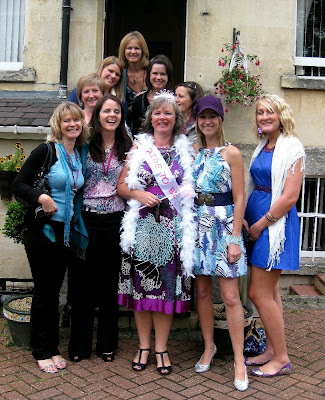 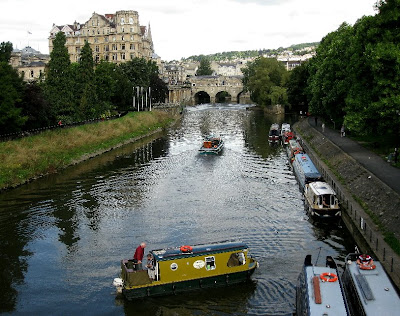 Narrowboats on the river in Bath (I can't get away from them!!)
Pultney Bridge in the background
Barry seems to have had a good time without me, doing lots of touristy things in York but most importantly doing a pub crawl on Saturday night with Tim, Catherine’s (second cousin once removed!) husband.

This morning we had another quick look around York, as Kath hasn’t been here for many years, then we set off in the sunshine towards Ripon. Kath had a go at driving and did very well, then did a spot of boat-top sunbathing in between cloudy spells!

Our journey today took us to a place called Boroughbridge, not far from Ripon. We had two very large and cumbersome locks to get through which were hard going after all the mechanical ones we’ve had over the last few weeks. At the second one, two lovely Polish men appeared and opened and shut both gates for me – wonderful!!

Barry caught up with Dave from the narrowboat ‘yesdear’ at Boroughbridge and got some welcome advice about some boat maintenance.
We had a walk around Boroughbridge in the evening, a very quaint place - the 44th of some 400 settlements built by the Romans and their successors between 1066 and 1348, as part of their plan to unite the new kingdom (maybe that's why it's called the United Kingdom??). We found a pub with a quiz night, but it was half way through so we couldn't join. We did stay and listen though, a very serious and tedious affair, totally different to the enjoyable one we went to a couple of weeks ago! Kath even fell asleep it was so boring and slow!!
.
More photos from Barry's weekend break (!) will follow shortly ...
Posted by Northern Pride at 19:22