Firstly thanks to Steph who emailed to say that the pink flowers we keep seeing at the canalside are probably called rosebay willowherb (also known as fireweed).

What an unbelievable change there’s been in the surroundings since we left the Foulridge Tunnel, just outside of Burnley. We took things at a slower pace today and attempted to find a launderette as we have so much washing accumulated now if I did it by hand it’d take me a fortnight to get through it! The weather has completely changed and was so flipping cold I had my Merino polo neck, my pashmina, my Rohan fleece AND my Berghaus wind/waterproof on! Oh yes, and of course my gloves. What a difference a day makes!

A view into the valley from the canal
It's still striking, photos don't do the landscape any justice 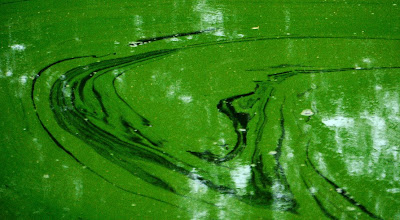 The canal got very green for a while, an alleged algae bloom problem that British Waterscape notified us of in an email:
"Wednesday 12 August 2009 until further notice
A suspected bloom of potentially toxic blue-green algae has been reported in the Leeds & Liverpool Canal throughout Burnley.
Although blue-green algae occurs naturally in freshwater, there is a risk of serious hazard to health when they occur in high concentrations. The highest concentrations of blue green algae toxins are found in scums which can form on the water surface, and which can look like turquoise paint, grass clippings or floating mats.
The toxins can affect humans, pets and livestock. You should avoid all contact with water which has a blue-green paint-like scum on its surface and also avoid contact with very green water. Immersion sports (such as paddling, swimming, and canoeing) carry a higher risk to human health and should not be practiced where there is a scum or green water present. Such conditions can come and go quickly, which means that British Waterways cannot guarantee the suitability of the water for these activities. Therefore, it is your responsibility to check for scums or green water prior to any immersion activity.
Do not allow pets or livestock to swim in or drink the water. We recommend that you keep dogs on leads.If you do come into contact with the algal scum, remove contaminated clothing and wash all exposed skin in clean water as soon as possible, particularly before eating or drinking.
If you are in any doubt about your welfare after contact with the algae, please seek medical advice. This advice remains in force for the forseeable future until the bloom has subsided."

It sounded very serious, so we decided not to swim in it! 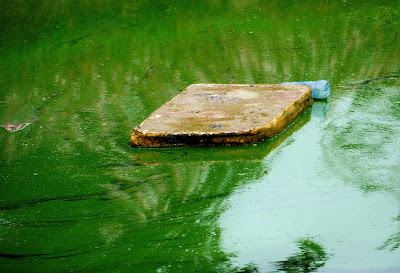 But maybe it wasn't too bad really! 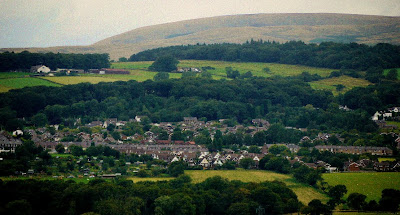 A view across the valley 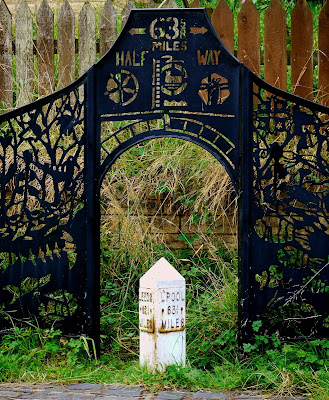 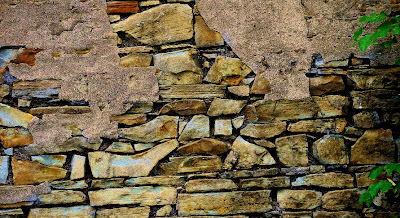 We cruised past a place called Accrington, and having put this onto my facebook status I was contacted by Steph with a You-Tube link about their football team, Accrington Stanley. Watch it, it’s hilarious! http://www.youtube.com/watch?v=CgYP1d5nN2o I remember the advert well ...

Accrington on a good day
We would've stopped, but grounded the boat on something while trying to moor
Not game to find out what, so we moved on!!! 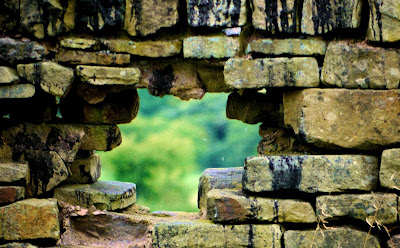 Obviously a cannonball hole through the wall from the 17th century
Very slow to do repairs around here! 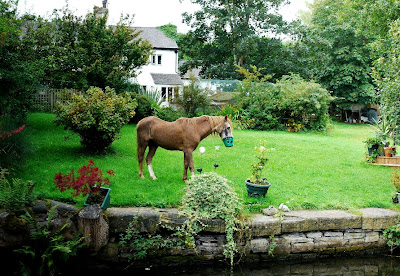 The navigation passes through some very sad and grey looking towns now. We stopped at a place called Rishton - Barry did a google earth search on the town and found hardly any green areas at all. It seems as though the whole place is made up of terraced houses with back yards, with the local kids playing together on the streets. Still at least we saw children playing outside, which appears to be a novelty. In the midlands and the south it wasn’t something we saw much of. Maybe their parents up in this part can’t afford a computer so they’re not stuck indoors playing games inside which the majority of youths do nowadays.
The Nicolson's Guide said that there was a launderette in Rishton, but it was nowhere to be seen and on asking I found out that it had closed down … Damn!!
Coming back to the boat after my stint in town, I challenged Barry to go for a walk or bike ride and find something worth taking a photo of, and of course he amazed me as per usual! 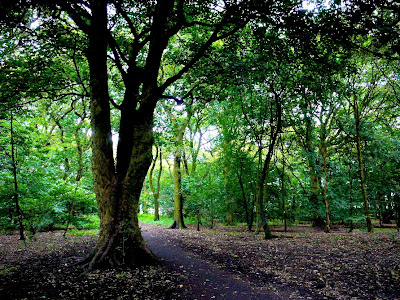 Rishton Park on the edge of town 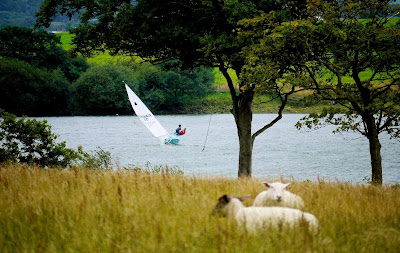 Yachting on the reservoir 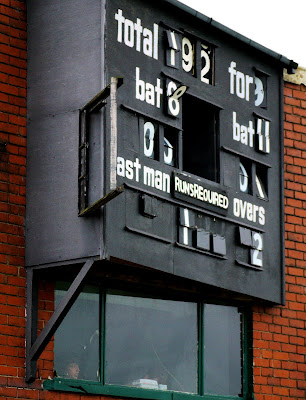 There was a cricket game going on at the time, but this was more exciting! 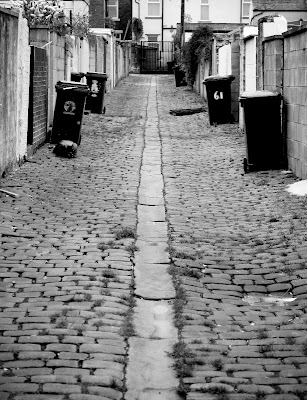 One of the adjoining alleys between the terraced houses 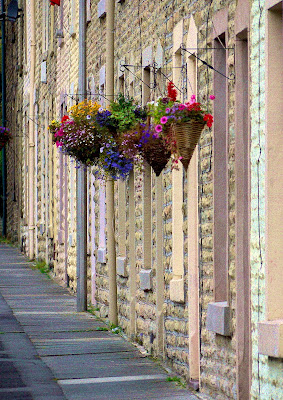 Can't say they aren't trying to brighten the place up 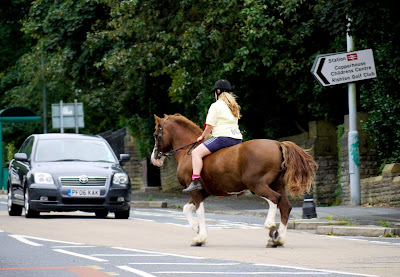 Not necessarily a one horse town; though I didn't happen to see any others! 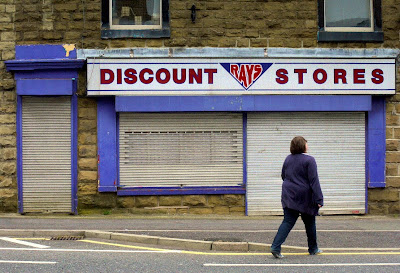 It isn't just the prices that need trimming around here

Good to see kids out playing, even if it is in the middle of the street 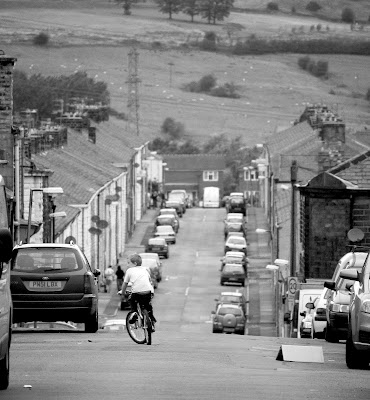 When you don't have a playground or back garden what are your choices? 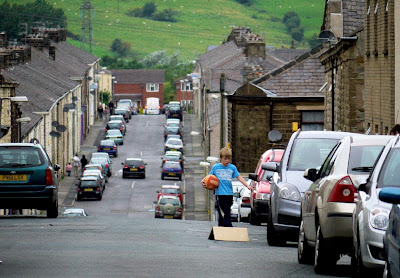 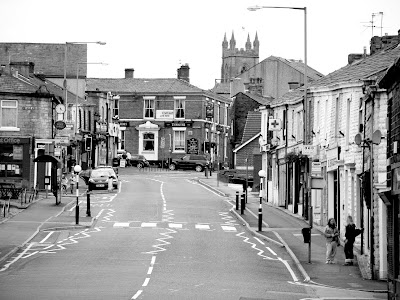 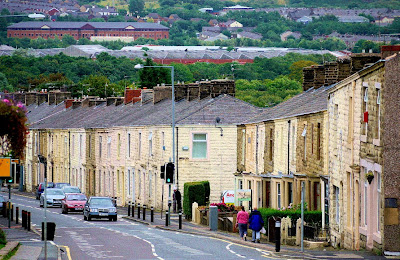 Looking out towards Great Harwood to the north
I love these terraced houses! 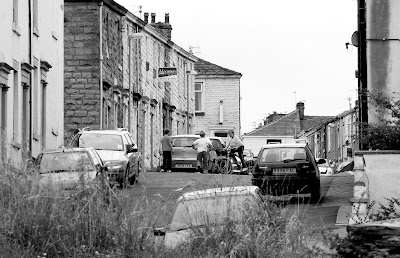 The kids were still out playing till dad came out and called them for tea
It was great to hear them laughing and squealling
The search for a decent mooring near a launderette continues (now with several days/weeks of smelly clothes around). We think there may be a couple in Blackburn, so we’ll try there tomorrow, but we didn't want to venture there today as the Nicholson Waterways guide book says to ask the lock-keeper where the secure moorings, are which is a tad concerning!

I got a bit excited this afternoon when I read on msn that there’s a mini heatwave predicted for this week; but sadly it’ll be in London and the south east before a chill heads their way from the west – guess where we are? Of course, in the blooming west where it’s very cool.

Go to :
http://news.uk.msn.com/uk/article.aspx?cp-documentid=149198176&ocid=today
"Fleeting return to summer predicted
Britain's elusive "barbecue summer" will make a brief appearance this week, with parts of the country expected to bask in sultry temperatures.
By midweek, southern and eastern parts of the country will be enjoying sunshine and blue skies, with the mercury predicted to hit 29C on Wednesday.
But the fine weather will be fleeting as a cool front moves in from the West."
Posted by Northern Pride