We were confronted with possible evidence this morning that BW really do clear some of the rubbish and weeds from the canals, as we encountered two working boats. Having said that of course we’re not in a BW area at the moment, so maybe that’s why it’s the first time we’ve seen such activity?! 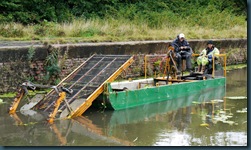 This morning’s weather was dreadful with a howling gale and driving rain - we even put the radiators on to keep cosy! We took our time leaving Astley Green for our next stop in Worsley, before heading into Manchester tomorrow. 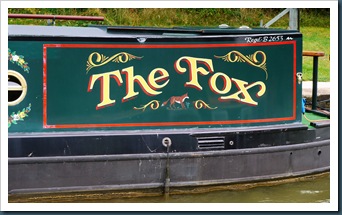 Saw a boat for the Fox clan on the way

It was just a short three mile trip, but a pleasant one as the weather improved a little. As the canal approached Worsley the water became an orange colour, known as ‘ochre’ due to the seepage of iron hydroxide from the underground coal mines of the area.

The coal seams ran under the higher ground to the north. The Duke of Bridgewater's land agent, John Gilbert, saw that it was possible to connect the canal directly to the mines by way of an underground canal, which could be used to help with draining them, and also provide a source of water for the canal.

The underground canal was constructed from Worsley Delph, an old sandstone quarry near Worsley Brook. At one time a million tons of coal a year passed through here. Around 47 miles of underground canals were constructed, on four different levels, connected by a water powered inclined plane and lifts. Specially designed boats were used in the tunnels which were only four and a half feet wide with protruding ribbed sides, and so were given the nickname of 'starvationers'. These were loaded with coal at the coal face, hauled from level to level on the inclined plane, and eventually brought it out onto the canal: www.penninewaterways.co.uk/bridgewater/bri2.htm

The area known as 'The Delph', contains one of the openings to the mines, and also the quarry where the rocks were obtained to build the Bridgewater Canal - it’s a fascinating place.

However the conditions and pay for these men weren't too good, and a collier was quoted in a local newspaper in 1843, after the accidental death of one of his colleagues, as saying:

“Who would be a collier to be exposed hourly to death: to have his head split in two and his brains dashed out: all for four pence a day?” 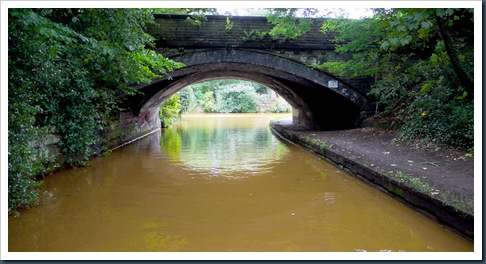 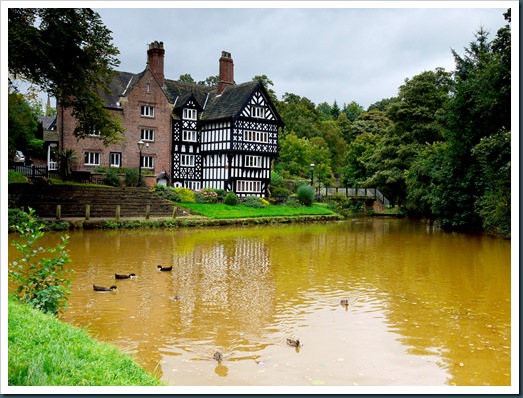 Worsley itself is just a small hamlet with a few random shops and a couple of pubs, but the homes in the area seem very affluent with a variety of top of the range cars apparent; BMW’s, Mercedes, Audi’s, Porsche, etc. We suspect it’s mostly populated by people who commute to Manchester, but don’t want to actually live in the city.

There are five information boards scattered around a circular walk which show the heritage of the area.  In the now very flash village green, there was a boat-building yard, nailmaker's, basketmaker's and wheelwright's workshops, timber yard, warehouses and railway siding craftsmen.  There's evidence remaining of the work carried out there. 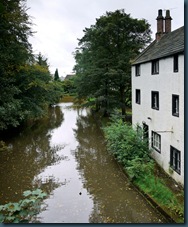 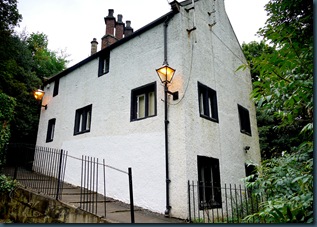 The oldest building in Worsley, originally the nailmaker's house 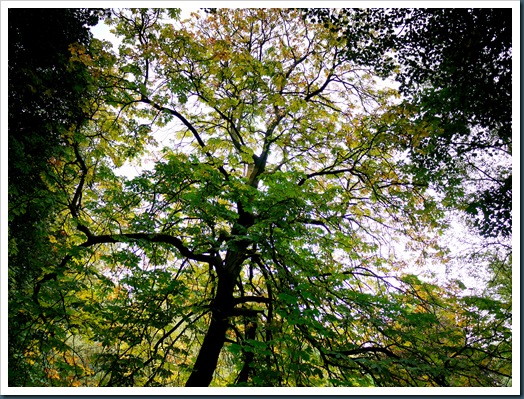 A walk through Worsley Woods revealed the first signs of Autumn, some of the leaves are starting to turn yellow 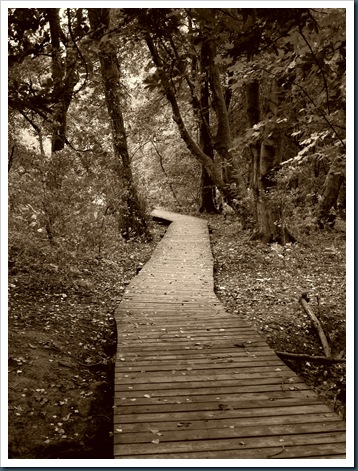 Continuing the lovely walk, which follows the stream for some way 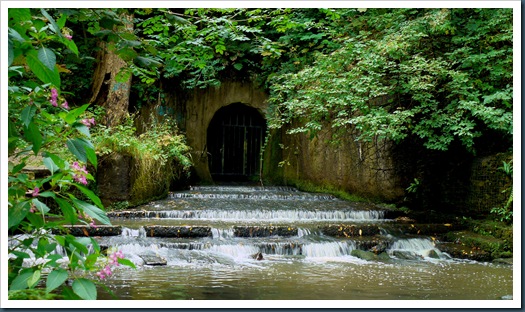 This culvert was coming out of the hillside; not sure if it's one of the old underground tunnels or just a drain 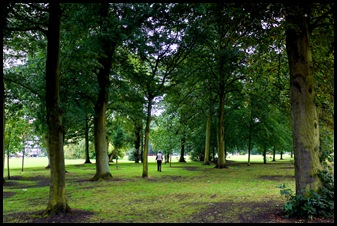 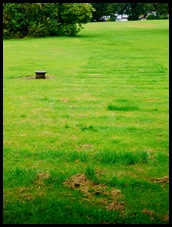 The village 'Green' which was once covered with all sorts of industrial workings. You can just make out where the railway sleepers were by the patterns on the grass, and there's an old mooring pin at the left side 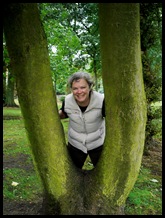 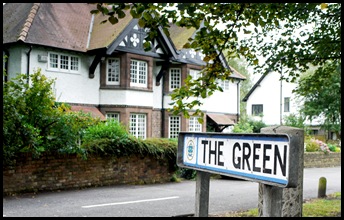 It's said that workers were persistently late returning from lunch, giving the excuse that they couldn't hear the clock strike one above the general noise coming from the yard. The Duke cleverly had the mechanism of the clock altered, so that it struck thirteen instead! This clock is now situated in St Marks Church and still rings thirteen times at 1 o'clock.  Hilarious!

Another story was that one man was late arriving at work and The Duke challenged him.  He told how his wife had unexpectedly given birth to twins during the night, and the worked said that instead of an abundance of money like the Duke, he had too many children!  The Duke gave him a guinea. 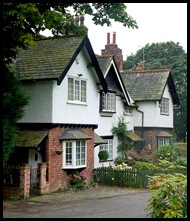 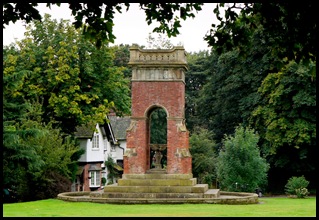 Some of the lovely houses surrounding 'The Green', and the monument built to honour the Duke of Bridgewater

It was quite a busy canal with boats passing us in each direction, and we’re wondering if our luck of not encountering too much boat traffic may be about to run out. The Shropshire Union Canal is closed in parts due to a breach (commonly known as a leak where the sides have literally ‘burst!), so hire boaters have been transferred onto the Macclesfield Canal which is where we’re heading. Unfortunately at that point we’ll be back onto a narrow canal which could make it more of a challenge; we’ve been on rivers and broad canals for as long as I can remember now! There’s only a week or so left of the school holidays so we may be lucky; we shall see … 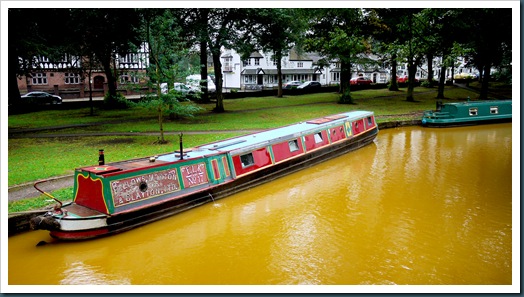 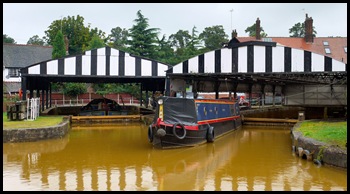 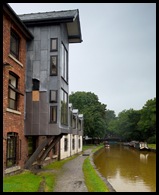 Left: The oldest dry dock on the canal system, and still in use            Right: The granary building, now offices 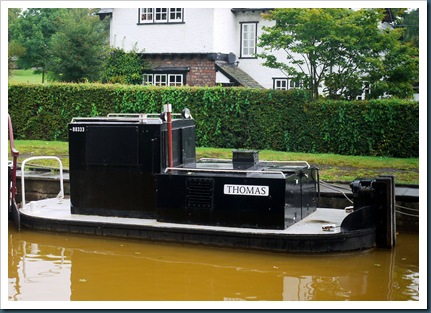 A boat for Tom 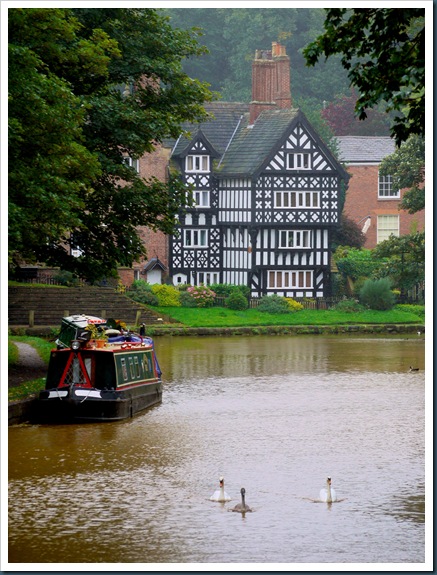 Worsley Packet House and 'Northern Pride' in this afternoon's rain ... 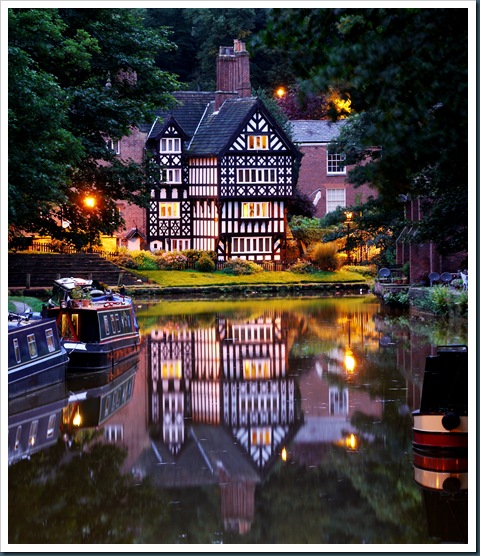 ... and once more this evening - what a stunning setting!

Through the park alongside the canal, looking at the main street of Worsley