What a load of rubbish!

Well we left Rishton for Blackburn and a laundry this morning, but as is becoming the norm, things didn’t quite go to plan …

The day turning to mush!! 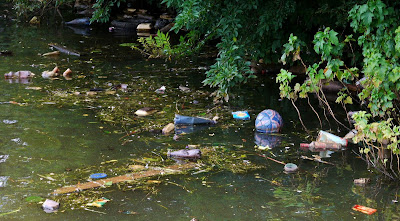 What do you think of it so far? RUBBISH! 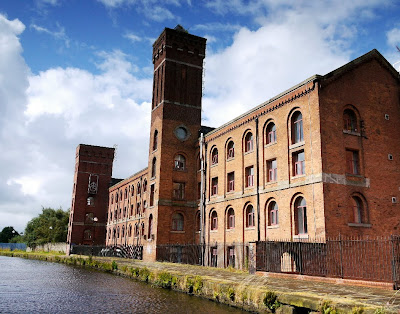 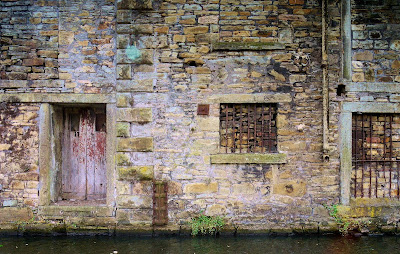 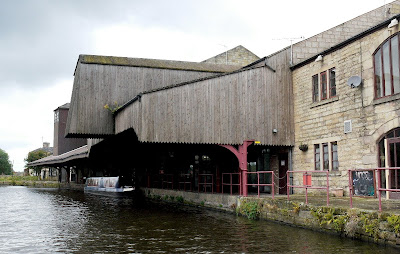 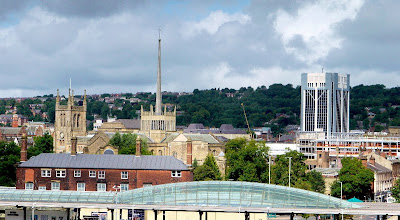 We’d heard from Derek and Dot (fellow kiwi’s on narrowboat Gypsy Rover) a little while ago, that they were on the same canal as us and we’d bump into each other at some stage. Low and behold they were moored up by Asda in Blackburn, so we peeped the horn and tied up alongside. A coffee and a couple of hours later and we’d talked one another senseless! They'd already done their shop for the day and wanted to get out of Blackburn and to the next mooring, and we wanted to get to Asda and were planning on visiting the launderette, so we said goodbye around 1.30pm. 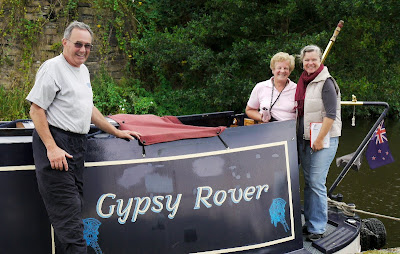 Derek, Dot and Sandra strike a pose on Gypsy Rover
.
After lunch I headed to the supermarket leaving Barry on the boat – it’s supposedly recommended not to leave your boat unattended whilst in Blackburn! Now don’t get me wrong, the people we've met along the way have appeared harmless and very friendly, but there's certainly a negative aura on the canal around here, as well as a general appearance, of what can only be described as squalour. I've never seen as much filth in and around the canals. A miriad of plastic drink bottles, whole bags of rubbish, the usual footballs, even a sofa and table at one point, a chair, a blow up paddling pool; etcetera, etcetera! Barry took a bike ride into Blackburn and he said the town centre was fine; maybe the people here just have absolutely no pride in their canal at all? Most perplexing ... 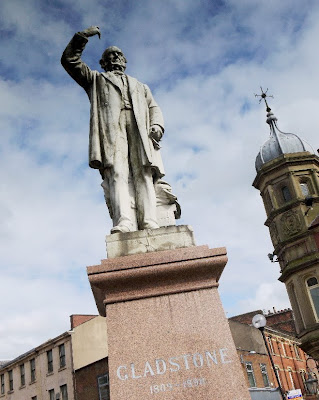 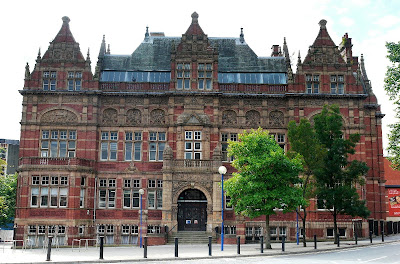 Blackburn College in the centre of the city 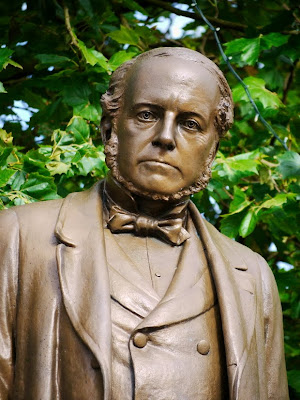 Not sure if this is Gladstone as well? He was giving me the evil eye though 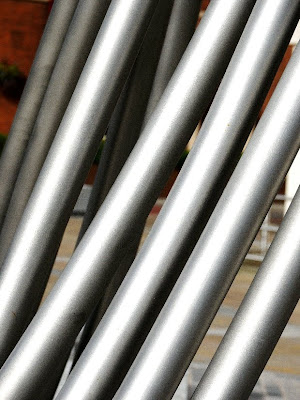 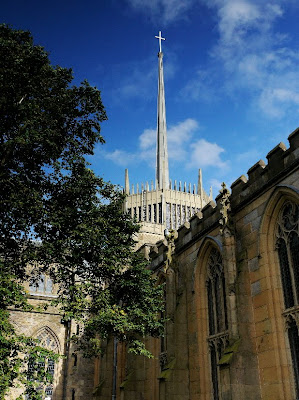 The oddly out of place looking spire on the cathedral 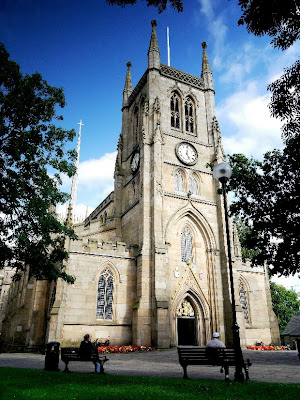 Blackburn Cathedral, the older section
By the time we’d got sorted to go through the six locks, it was already after six so too late to visit the launderette, even if it was open till eight o’ clock. I’d just had enough and wanted to get as far away from Blackburn and the detritus in its canal as possible. It’s definitely a canal of two halves!!!
.
I went ahead to open the first lock leaving Barry to drive the boat along, only to find when he turned the corner that he had taken some passengers on board and had a pushchair on the roof! Hilarious, I can't leave him alone for a minute and he's chatting up the locals! I suspect it helped that they were young and pretty and they'd played on his heart strings as it was one the girls' birthdays 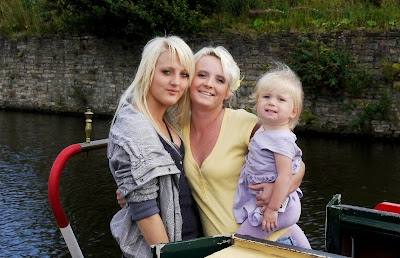 It was the girl in the middle's birthday, didn't ask her age (or even get her name!)
They were dropped off before the locks, which were hard work and in a terrible state of disrepair despite the fact that they all had dates in the 2000's on them so can't have been due to age. Rubbish continued in abundance, some had obviously been fished out occasionally and was left piling up on the side of the lock. No wonder there's green slime around this section of the canal, it's a health hazzard! 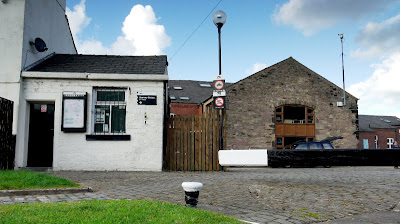 We assume this is the lock keeper's offices 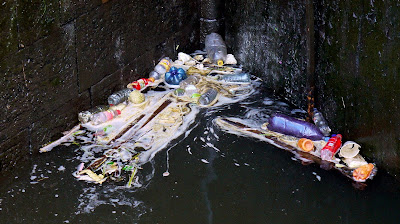 Flotsam and jetson in the locks, disgusting!!
We passed what must've been the BW Offices and were also shocked at the state of them, with a noticeboard showing a flyer for a painting workshop in November/December 2005!! OMG, does the lock keeper do anything at all around here or is he just fighting a losing battle and has given up?
.
On reading the supposed 'canal bible', Nicholson's Waterways Guide Number 5 (yes, the absolute latest edition of 2009!), you would picture a completely different place, and I quote:
"The lock keeper maintains a tidy flight - indeed most of the passage through the town is now pleasant - there is little rubbish or graffiti, and the views are excellent."
.
Unbelievable! Utter rubbish!! 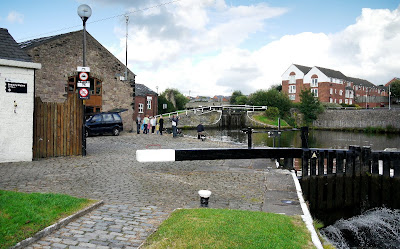 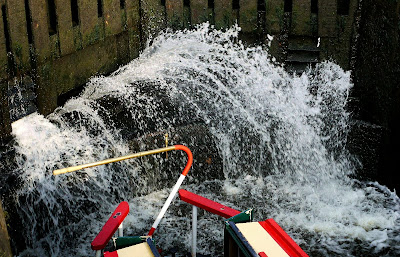 A bit of a leaky lock! 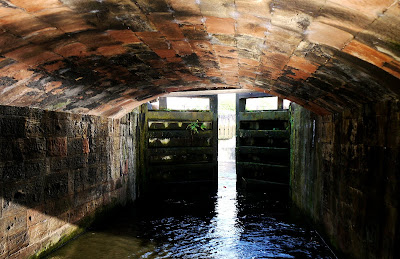 Exiting from one of the locks through a tunnel 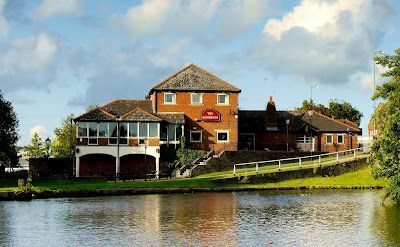 The Moorings pub - supposedly with 'moorings' but none apparant 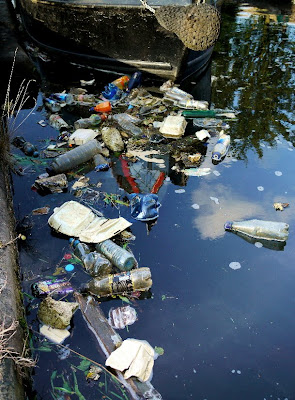 It really was revolting ... 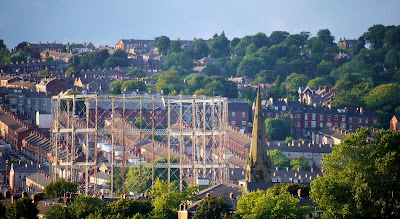 The usual terraced houses of this area ... 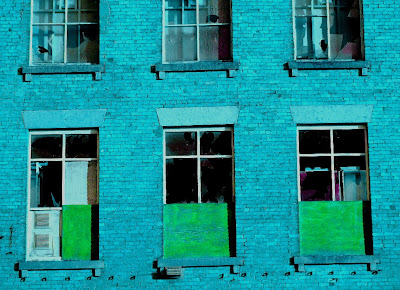 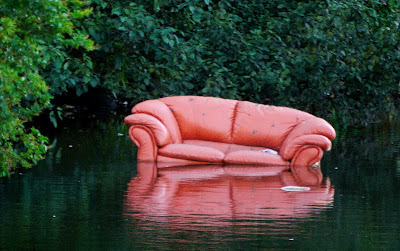 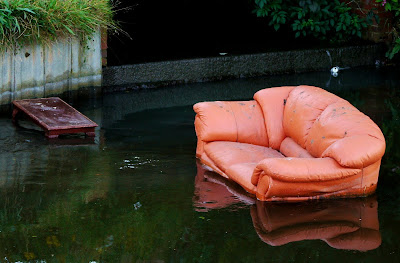 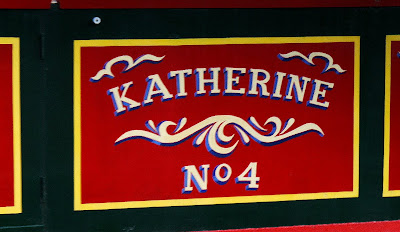 Found a boat for my sister Kath 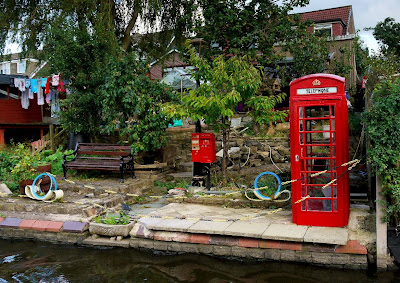 Strange place for a phone and post box, obviously neither in general use anymore! 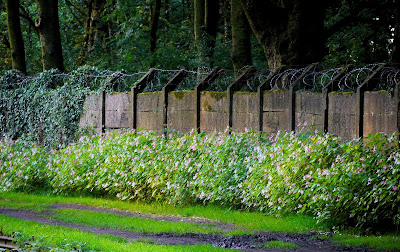 Not sure what this is all about as the barbed wire is sloping inwards to keep people 'in' rather than 'out'?!
.
We continued for about an hour out of Blackburn and the canal improved immensley. We found a suitable mooring, and showered to remove the feeling of scum from the day. It's very sad that the people of Blackburn are tarred with this impression ... 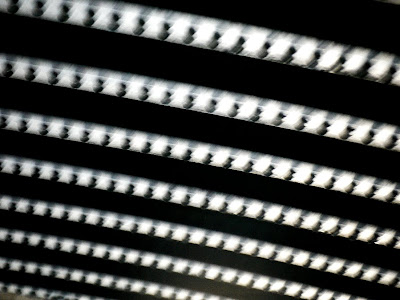 Underneath the arches of a railway bridge 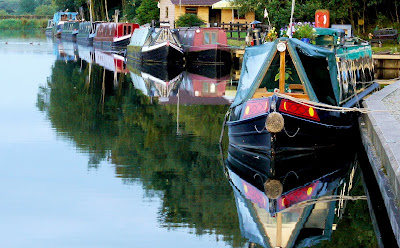 Our mooring for the night at Riley Green - what a relief!
Posted by Northern Pride at 00:20