A short trip to Christchurch Meadows & some partying madness

Barry spent much of Saturday morning chatting with the owners of the boats moored in front and behind us, relishing a good chin wag with the brothers on the working boats, Archimedes and Ara - they gave him a website to check out but unfortunately it's no longer viable so they may want to update it?  You can, however, contact them via Tom Hill on 07973915146. They'd taken three days to travel to Oxford from London to do some coal deliveries and then they're turning back heading to Beale Park, Lower Basildon, for the Inland Waterways Association Festival and Boat Show on the August Bank Holiday weekend.

Barry obtained a price list from them and we were dismayed to discover that we could've bought the 4 litres of 'loo blue' from them for only £9.00, having just paid £14.99!  What a difference, how can Boatyards justify such an extortionate profit I ask myself? 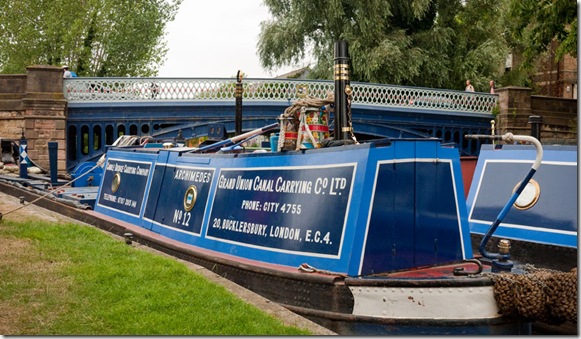 The low arched Osney Bridge in the background, with Archimedes in the foreground ... 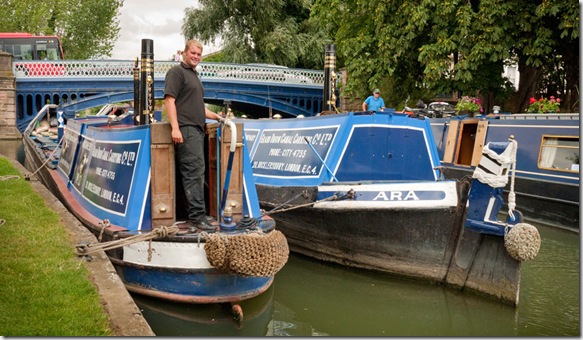 and Ara alongside, with one of the brothers who run the boats from Little Venice in London

We left our mooring before we had to pay £5 a night taking a short cruise for a lunchtime drink at 'The Isis Farmhouse', Iffley Lock, an unusual riverside pub in that it has no roadside access.  Beer was once delivered to here from the river and apparently during the 19th century the owners received 5 shillings or 7 shillings and six pence (depending on the side of the river) for every corpse they retrieved - crikey, they must've been dangerous times!

It's only open Wednesday to Sunday and sells a restricted, though very healthy sounding, food and drink menu. In fact most of the drinks are organically produced so I sampled a rather delicious cider. 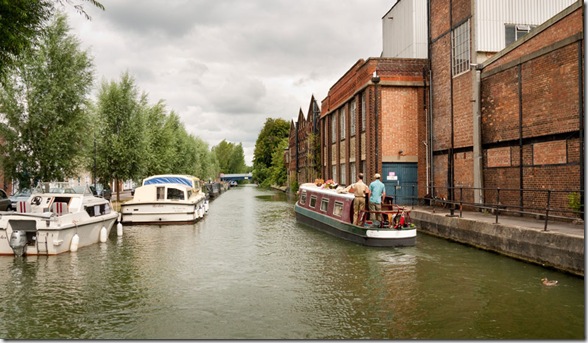 Leaving our mooring at Osney Bridge; a bit of industry alongside the river here but it doesn't detract from the beauty 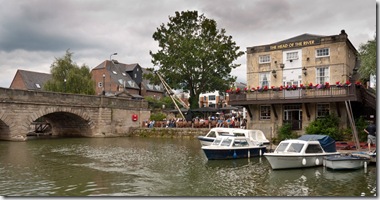 Folly Bridge and the island with a variety of shapes and sizes of buildings, including the offices of  Salter's Steamers passenger boat services

The new buildings on the left look so out of place!

Christchurch Meadow on the right 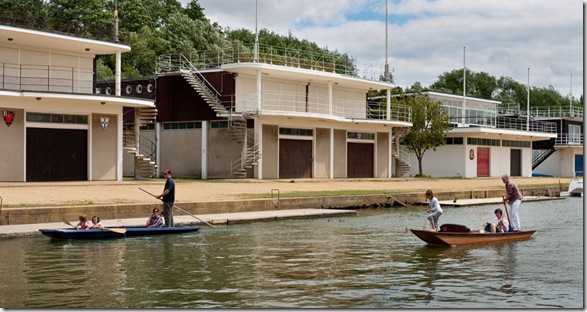 Probably one for every College?

We're sort of becoming accustomed at weekends now to seeing a variety of party boats with all girl or all boy occupants, presumably they're mostly hen and stag parties.  A small cruiser pulled up while we were at the Isis Farmhouse, with five blokes on board, two of whom were shirtless and given short shrift by the Landlord who suggested they attire themselves decently or they wouldn't be partaking of his wares! They duly succumbed and returned to the boat to dress a little more appropriately, though their language was a lot worse when they got back to the garden but didn't draw a comment which I found rather hypocritical seeing as there were a number of small children around - it's bizarre what people can take offence to!

Another small cruiser that pulled alongside had 'Groove Armada' painted on it's side.  Kim sort of noticed this but didn't think too much of it until we'd departed when she exclaimed that maybe it really was her favourite 'bands' boat (they're actually DJ's I think!) and we suggested returning to check it out but we didn't.  Their single 'At the River' is one of my favourite tunes, and to think we could've met them 'at the river' too, possibly a missed opportunity?! 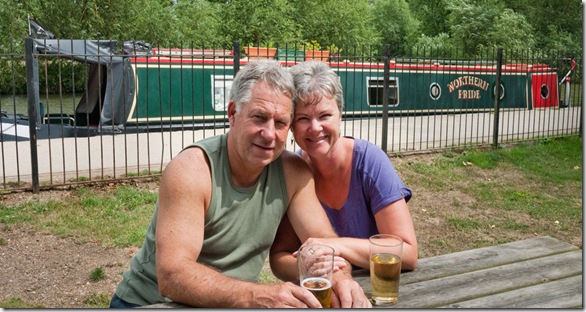 Refreshments in the garden of The Isis Farmhouse 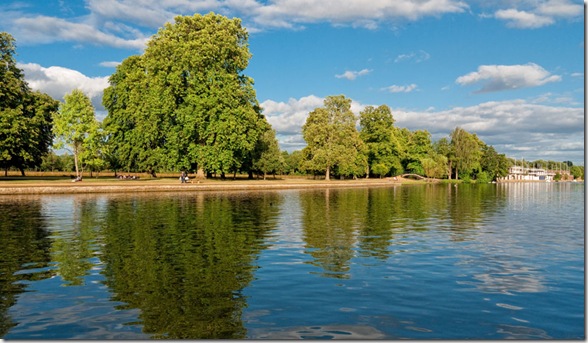 Returning to Christchurch Meadow to moor 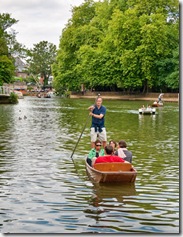 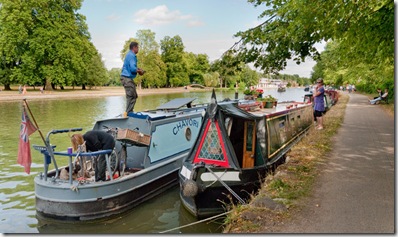 We were again fortunate to find a precious mooring, this time opposite Christchurch Meadow, which is a short walk to Sarah's house on Sunday morning for Kim to collect her car.  Shortly afterwards there were no moorings to be had, so the gentleman above asked if he could moor up alongside us and leave his dog on the boat while he did a spot of grocery shopping - we happily obliged and Kim got her dog petting 'fix' keeping him calm while his owner was away.

We thought we'd try and bit of Oxford night-life eating some delicious Thai food at a delightful pub called 'The Old Tom', a historic hostelry with friendly and happy staff (always a bonus in our view!):

"Great Tom, in the Tom Tower, usually called Old Tom, is Oxford's loudest bell. At 9:05 every night, it rings 101 times. The tradition arises from the original number of students in the college -- plus one added in 1663. Five minutes after nine was once the time that the Oxford Colleges closed their gates and locked their doors. Great Tom was rung to indicate that each of the original 101 students was safely inside the gates.  The Old Tom Pub across the street from the Tom Tower since 1769 is, coincidentally, at Number 101 Aldgate."

We almost missed the bells ringing - well I missed them completely as I was paying our bill but Barry managed to catch the last few peels!  The issue for the students being 'safely inside the gates' probably originates from the fact that around the time that the University was first opened, the local inhabitants were not at all pleased to have them around and 63 students were murdered during a protest march!

A short stroll into town 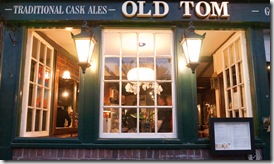 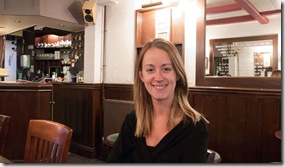 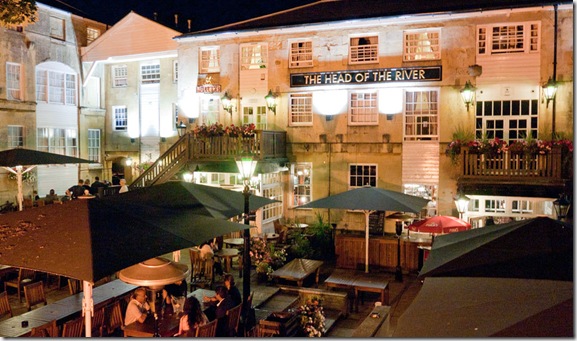 We had a final drink in The Head of the River, before heading back to the river and the boat!  The most surreal sight accosted us as we walked back along the Thames Path - one of the Salter's party boats was returning with a boat-full of women dressed as sailors and as it headed back to town it was booming out Michael Jackson's 'Thriller', at the point where the voice of Vincent Price is describing hell, looking like a dark spectre with flashing lights - it was spectacularly spooky!

I took advantage of the situation once we were back at Northern Pride and had a bit of a dance on the path as they slowly made their way back to base at Folly Bridge - well it was so dark no-one could see me! 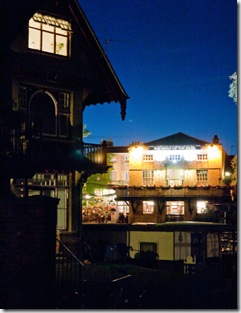 The Head of the River lit up - and the flashing lights of the disco diva boat! 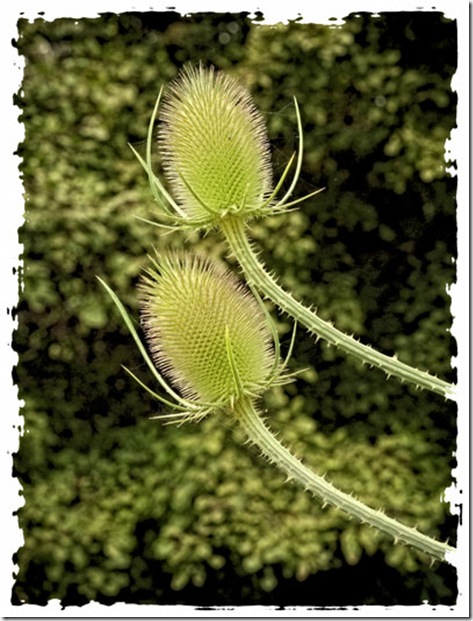