Oxford to Abingdon leads to a 'dry' boat (nothing to do with the drought!)

Sadly Kim had to return to her home in Brighton on Sunday, we loved having her on board for six days.  Barry had found a 'short cut' across Queens Colleges Cricket grounds to get us to Abingdon Road - well he thought it was until we got to the exit gate to find that we'd walked through private property and said gate was firmly padlocked!  At some time a rather muscular person must've had the same problem and bent two of the railings a little - Kim being so slim managed to easily slip through the gap, I attempted it and almost got my head stuck - I could see the firemen laughing as I swiftly removed myself from the horror!  Barry bent over and I climbed onto him, hitched over the part of the gate without the spikes on and jumped down - I'd like to say I did so nimbly but I'd be lying!  Anyway, no injuries incurred.  Barry deftly climbed up and did jump down like a child, not sure how he does it! 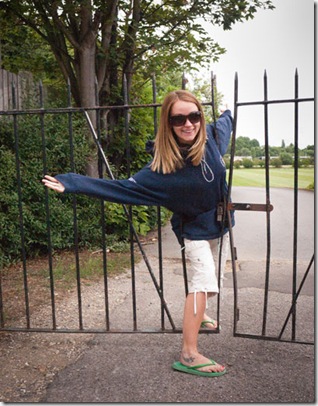 Kim doing her Houdini impersonation, though was a little harder to escape Sandra's hug 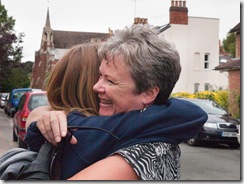 Kim found her car, 'Bertie', happily parked outside Sarah's house and set off home.  Barry and I had a coffee with Sarah, and discovered that she'd recently acquired four ex-battery hens, but unfortunately one was already gone, seemingly slaughtered by a ferocious fox as there was a trail of feathers further up the garden - bless it!  I was saddened to see the state of these hens in comparison with my daughter Lisa's hens (see blog post of 6 June - 'Family and foul play'), it reiterates why I only buy 'free range' eggs, though as Lisa says, that's no use unless I also buy free range chickens!  How dense of me, I never really thought about that!  I shall make it a mission in future to look out for it now I've seen the state of these poor hens after living in such confined spaces. 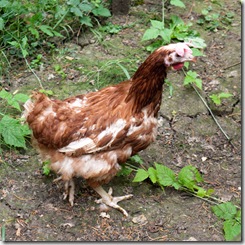 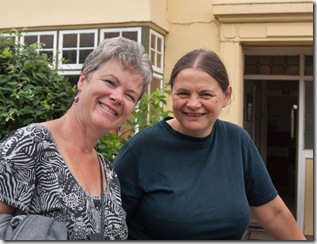 Returning to the boat we finally left Oxford after two weeks in and around the city - it's almost the longest we've stayed anywhere, being marooned in Evesham during May 2009 for over three weeks holds the record.

The journey to Abingdon cruises through some charming scenery, with just a couple of mechanised locks on the way.

Oxford University Rowing clubrooms - a notch above the rest 'What, what!'

Looks like the Jamaican bob sleigh team, now a rowing team at Oxford - is that Mr T at the back?

Isis Farmhouse from the river 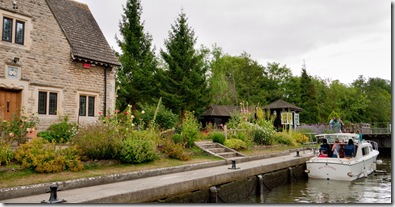 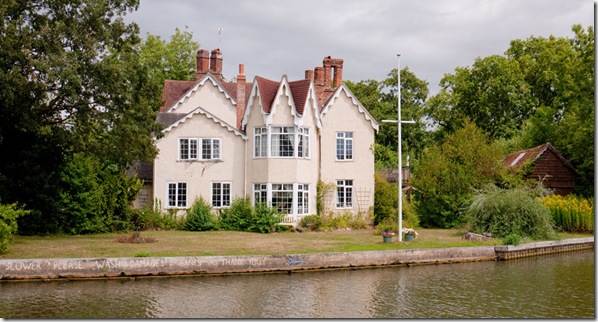 Looks like a dolls house, but a full size version! 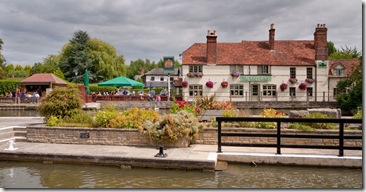 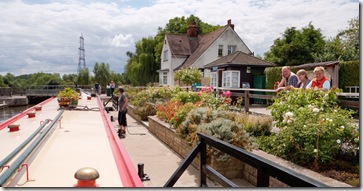 Holding on in Sandford Lock

The fields are looking very dry 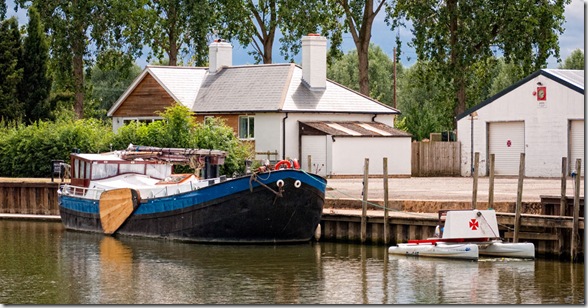 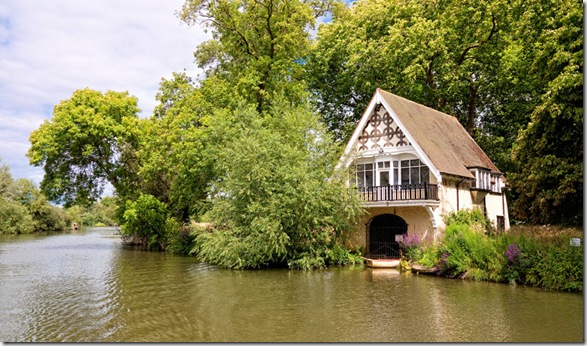 How cute is this boathouse?! 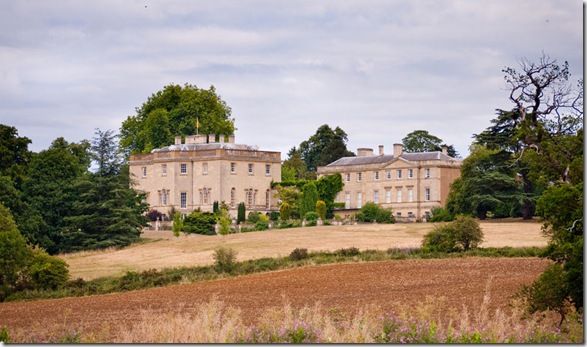 Barry had heard the sounds of motorbikes in the background for a while, and just past Nuneham railway bridge we came across a swarm of motocross riders at a place called Culham Park where they apparently held the  British Motocross MMX Championships September 2009.  It looked terribly dangerous but lots of fun!

Wow! what great timing catching the start of a motocross race from the top of the boat

A bit of a scramble up the hill - how do they manage not to bump into each other?! 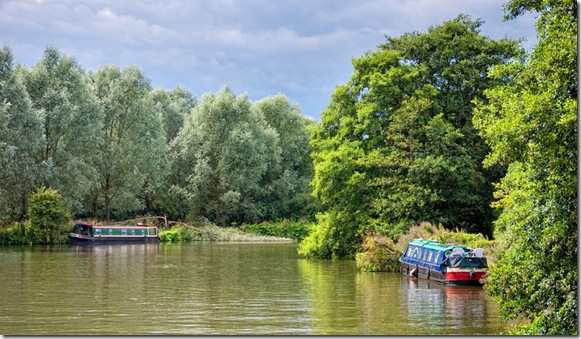 Shades of green blend stunningly with the boats and river 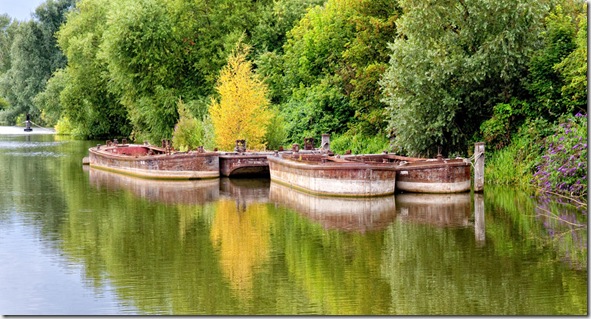 While here there's a startling contrast of brown, yellow and purple with the greens 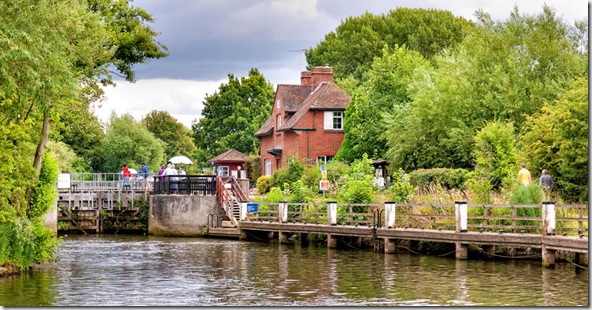 Looking back at Abingdon Lock

We arrived in Abingdon around 1600hrs and found it to be a very busy place, with lots of free moorings, and found a handy place with enough room for our boat and Wand'ring Bark - though they were a good three hours behind us at this point.  We were a little reckless in that we didn't do our usual neat parking to enable other boats to moor up as we were hoping to 'save' the spot for Andy and his crew - luckily no passing cruisers felt like stopping next to us so by then time they arrived the space was still there and we moved along for them.

It was good to see hoards of families having fun in the park opposite, how fabulous that the weather is being kind during the school holidays (so far!). 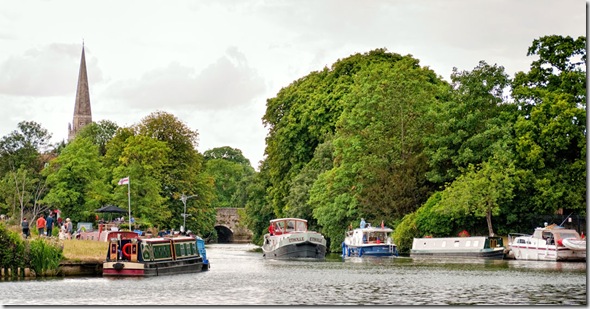 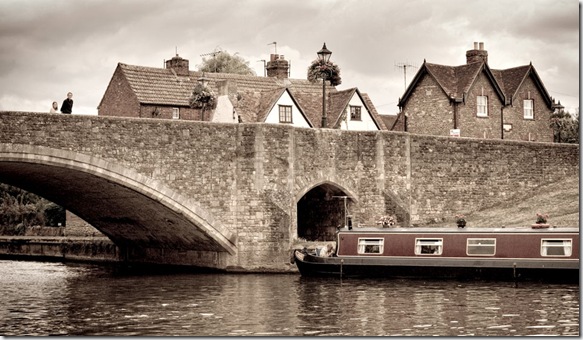 We had a splendiferous evening of fun with Helen and Andy who'd travelled all the way from Thrupp. Barry taught them his card game, we drank rather too much boat brew, and ate some naughty nibbles - Andy partook of rather too much of Barry's special recipes and just missed a win by putting the wrong card down in the last round!  He was mortified bless him!  Ah well, there was lots of singing too, Andy and Helen seem to have a song for most sayings, and they got funnier as the night (and home brew) wore on - by the end of the evening and the week with Kim we had a 'dry' boat!  Barry will have to get busy ... 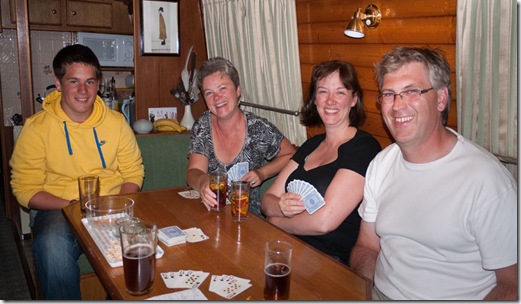 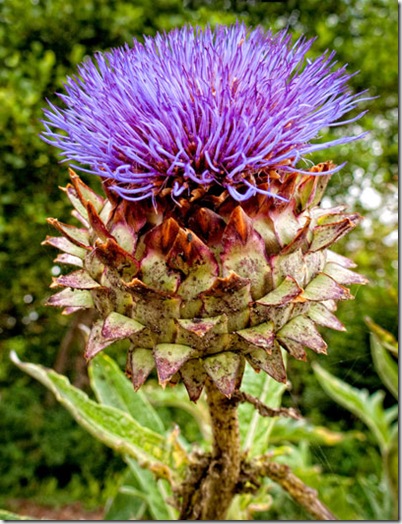 A beautiful huge Scotch Thistle (I think!) at Iffley Lock

Thanks to 'Sarah' for pointing out that the 'naked thistle' on yesterday's blog was in fact a 'teasel'. She said "they're an interesting plant because they were used in times gone by cloth workers to raise the nap on woollen cloth - the prickles being ideal for this purpose!" - how cool, we love receiving such interesting information.