Dickie and Sandra arrive at the Caen Hill Flight - awesome!

Before leaving Devizes, Barry had a look around the Kennet & Avon Trust Museum at Devizes Wharf, but we didn't venture any further into the town.  We had a phone call from Dickie and Sandra who were coming by train from Brighton to Bristol, so we worked out that they could get off the train early at Bath, then get a bus to The Black Horse pub at the top of the Caen Hill Flight.

Due to all the dithering about trying to organise our meeting with the new guests, we didn't start out for the locks until after 1400hrs!  The last boat is 'allowed' through Caen Hill by 1700hrs in order to clear the flight by 2000hrs, and there's six locks before we'd even reach the flight!

Minutes before we untied our ropes, the boat behind us left and there was NB No Problem moored up.  They said they'd arrived a while before but didn't see us, otherwise they would've done their shopping in Devizes and shared flight with us - shame :-(  Ah well, we're bound to pass them again on our return journey. 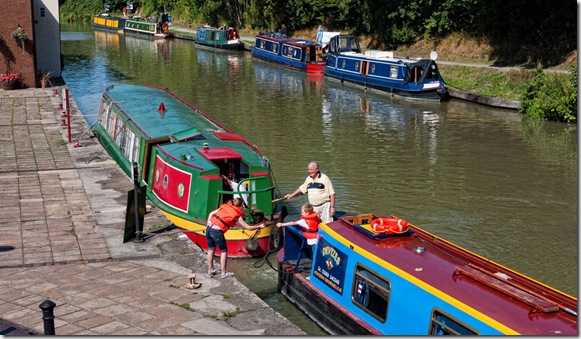 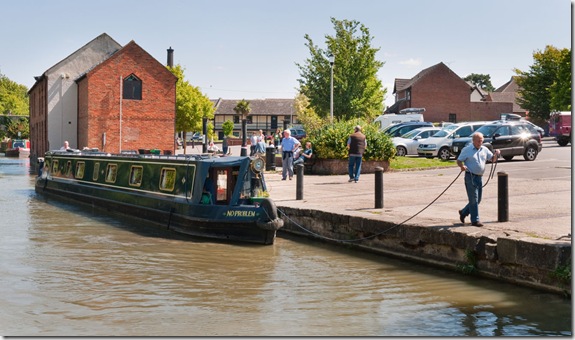 Arriving at our first lock of the day, there were two boats about to go down which was fortunate as it's recommended that single boats wait 20 minutes before going through the lock to save water.  Unfortunately we waited in vain and did the rest of the locks on our own. 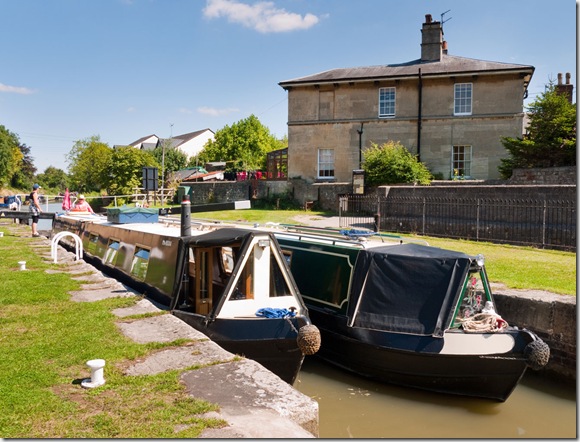 The first of the locks of the day - and the first of three lots of boaters to say they'd just read our article - fame at last, lol! 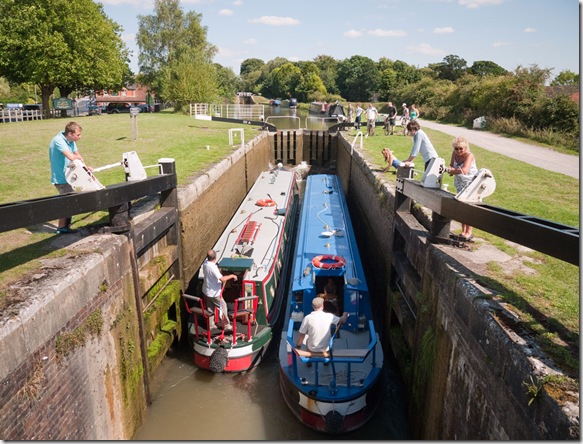 The Black Horse pub on the left, where Dickie and Sandra will get off their bus from Bath 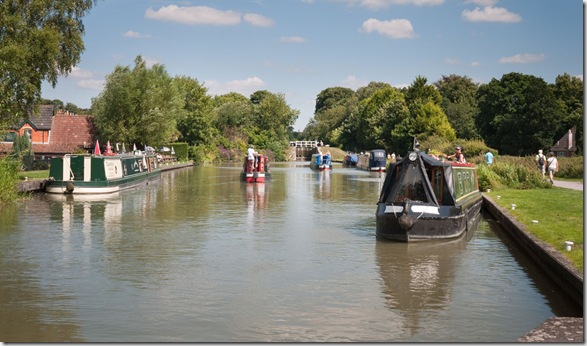 Approaching our fourth lock, all good so far ... 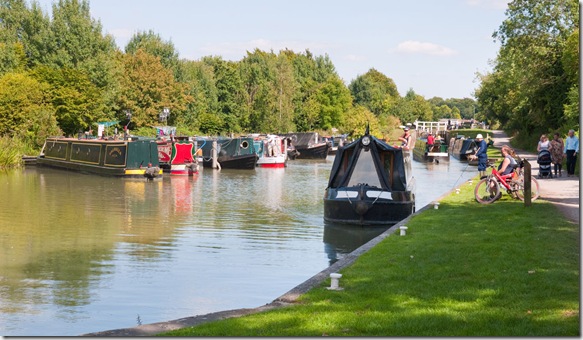 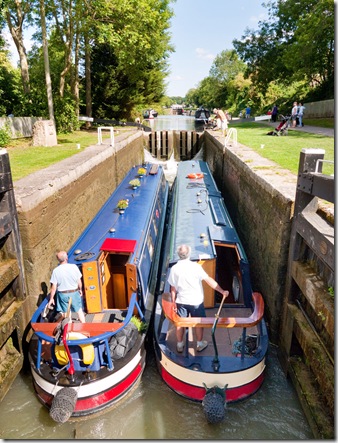 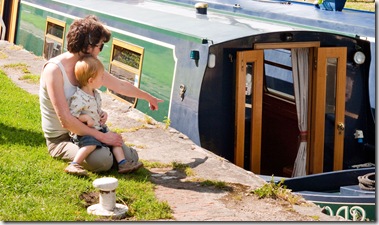 "People live in there" 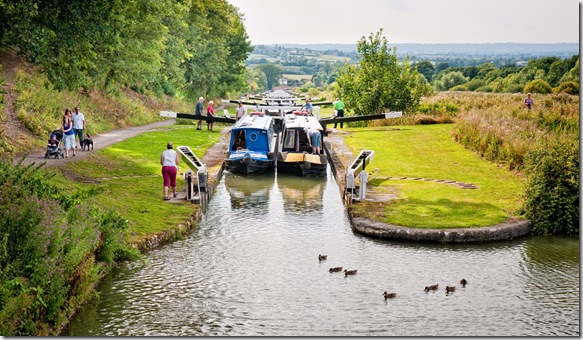 Unsurprisingly there were many gongoozlers along the flight, and we picked up a few people on the way giving some children (and a mum!) a ride down a lock each, which they loved - a great experience for them.

We met up with a few folks today who've read the article in Canal Boat which is cool - it's a bit like blogging I suppose, people say 'hi' and you know that they know so much about you and your life so they feel as though they're meeting up with old friends - but of course we know nothing about them which can be a little disconcerting!  But that's OK, it doesn't take us long to have a bit of a chat. 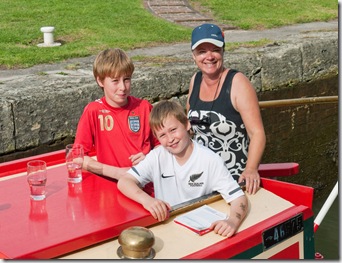 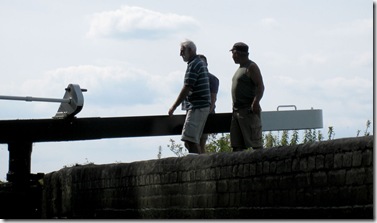 The Caen Hill flight is truly magnificent, especially on a glorious warm and sunny day.  It's definitely one of the highlights of the canals of England, we were so lucky with the weather - what a superb view.

Each lock has its own large side-pound to conserve water, with an abundance of wildlife and they're extremely well kept.

It's apparently a deliberate policy of the canal management to allow the fringes of the Kennet and Avon canal to grow to encourage wildlife and plants to flourish, cutting back specified lengths each year.  You can notice the overgrowth all along it's length, and once you know the reason for it it becomes most attractive - though at times we've found it a bit frustrating for mooring up. 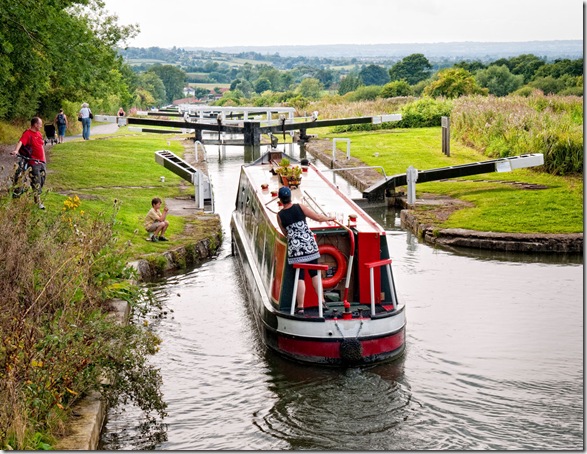 Dickie and Sandra caught us up at lock 40 and were thrown straight into a hard afternoon's graft, no messing!  After stopping for five minutes in a lock for a cup of tea (there weren't any other boats around, honest!) to impart a few basic boat health and safety rules, and instructions on how to use the loo (vital!), we were away. 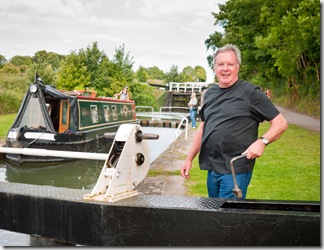 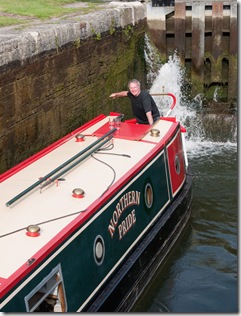 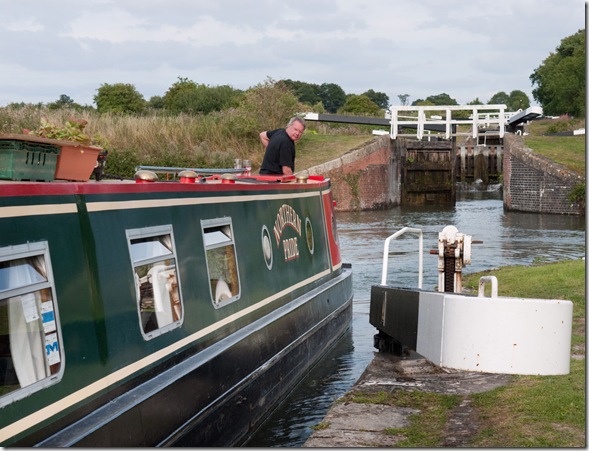 Dickie soon cracked the skill of steering into locks - a great chance to practice on this flight! 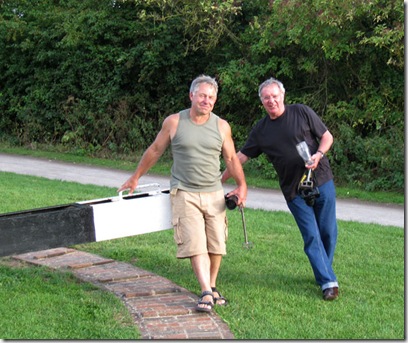 Old friends looking terribly pleased to be back together - oh dear, a few days of frivolity to come ... 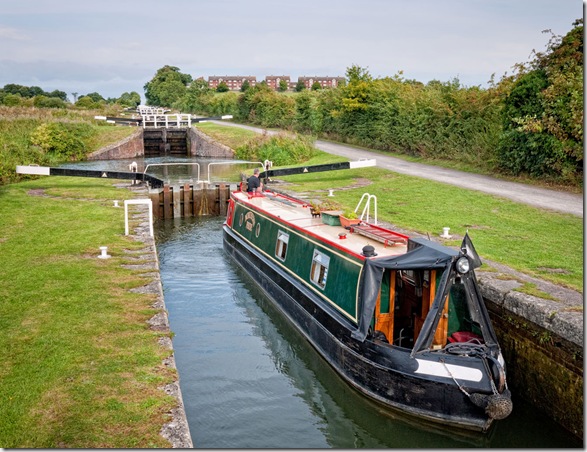 Dickie has a pensive moment alone in the lock 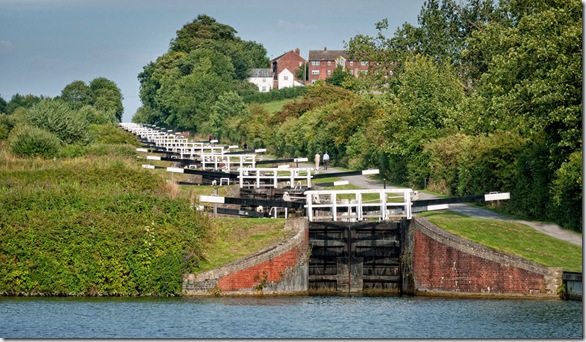 At the bottom of the 16 lock Caen Hill flight - marvellous!  A joy to go through and we get to go back again in a couple of weeks time on the ascent! 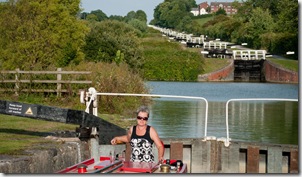 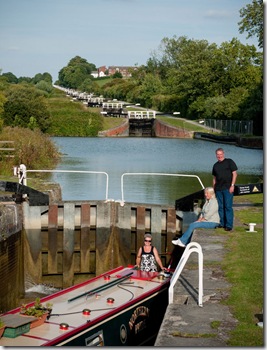 Not finished yet though, another seven locks before the day's end! 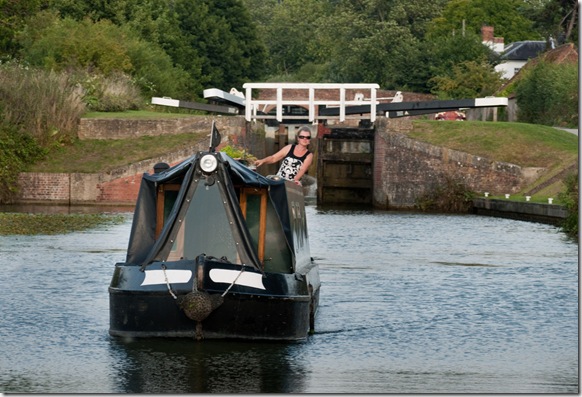 The final straight - approaching lock 22, our 29th lock of the day, having only covered a distance of just over 2 miles in about five hours - incredible!

Nineteen locks later Barry saw a pub advertised and decided enough was enough, so we stopped a short walk away from The Three Magpies, at Sells Green, and went for dinner and drinks.  As we were mooring up, a couple on the towpath from the boat behind us said "Are you the people from the article?  We've just read it" - how lovely!

It was a jolly night; Barry and Dickie go back to the early 1980's when Dickie came to Gisborne for a couple of days and stayed for a year, living with Barry and some of his mates.  They'd caught up last year in Brighton and again earlier this year when they both came to NZ.

Back on the boat and we were presented with a few gifts - two new tops from the boat that Dickie had been working on recently as an 'Able Seaman', two crystal glasses from the boat too, and a copy of a book of his dad's poetry - bless you both.  Now we not only have matching caps from Trish in NZ, we also have matching sweatshirts.  Sadly Dickie took a photo on his camera but we didn't retrieve it before they left :-(.   Probably a good job really! 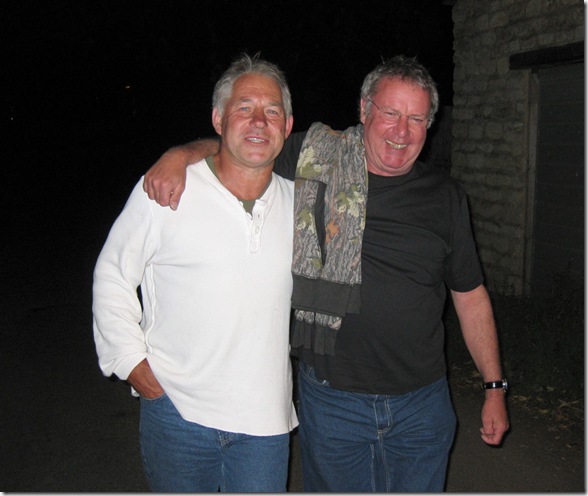 Barry and Dickie returning to the boat after a few pints, giggling like a couple of naughty schoolboys! 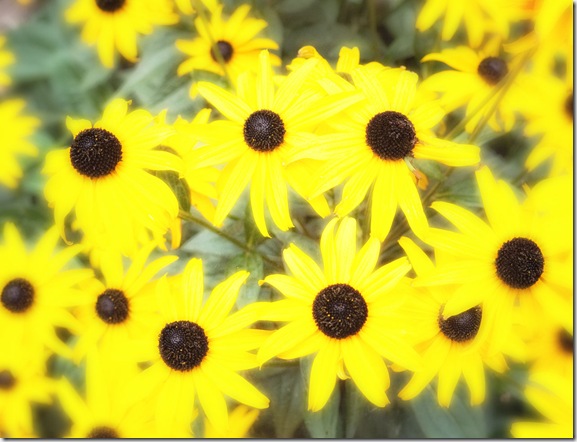 Such a happy sun shiny day - must be yellow daisies of some sort?