Exploring Hungerford and beyond

Considering our late finish last night we were up and about fairly early on Thursday, and after a cooked breakfast took a walk into Hungerford.

I knew I'd heard of Hungerford before, and thought it must be because I lived in a place called Tidworth, not far away, for a few years in the mid 80's.  However, when I did a google search of the town I realised the overriding reason was more likely to be the 'Hungerford Massacre' of 19 August 1987 (a short time after I left the area to begin my midwifery training) when Michael Ryan, an apparently rather spoilt young man with a legitimate gun license went on a seemingly unprovoked violent rampage, killing 17 people (including his mother) and injuring 15.  He started his atrocity at 1230hrs and it didn't end until around 1700hrs after he'd barricaded himself into his previous school and eventually committed suicide.  One of the statements Ryan made towards the end of the negotiations was widely reported: "Hungerford must be a bit of a mess. I wish I had stayed in bed."

The catalogue of disasters from the police's point of view would be funny if it weren't so tragic, apparently a number of factors hampered the police response:

Unsurprisingly, The Firearms Act was amended in the light of the events - you can read more about the day's events here - it really is amazing how he managed to cause such havoc, for so long - very scary! 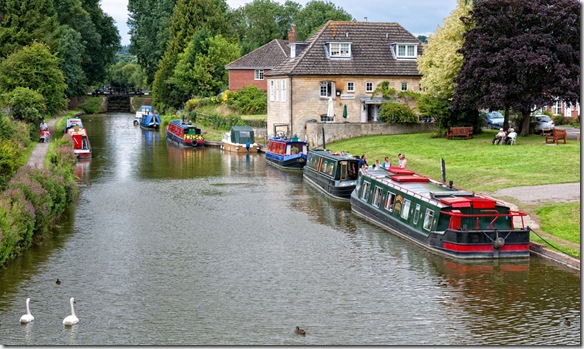 Our moorings at Hungerford - NB Northern Pride on the left, WB 'Rebecca' on the right 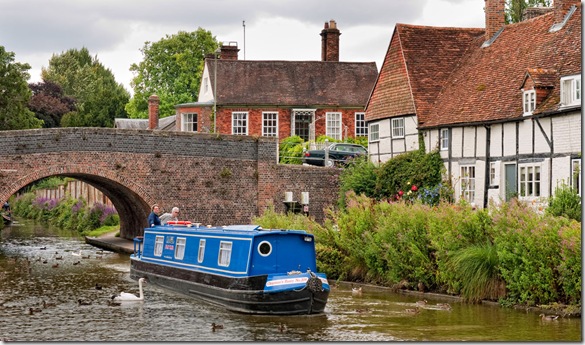 Hire boaters running the gauntlet of swans and mallards through Hungerford

Hungerford is obviously a very affluent town, with masses of antique shops and exclusive dress shops - the ones where you can't really go in and casually 'browse', but would have an assistant watching your every move if you didn't look as though you could afford to spend a few hundred pounds in their premises!  Unsurprisingly window shopping was the only type we did, though we did check out one of the larger, less exclusive looking antique shops, and discovered a fascinating array of collectibles.

As we walked up the High Street a delightful aroma of fish and chips overcame us, so much so that we decided they were irresistible, despite the weight-loss programme (of mine!) and succumbed to a large portion of chips to share and a sausage for Barry - well you can't be good all the time can you, life would become boring?  As we sat on a roadside bench eating them, who should come past but Dave from 'Rebecca', searching for a recycling point. I recall at the commencement of our trip in 2009 I was very good collecting paper, glass, cans and plastic to recycle, as we do in NZ, but soon gave up after experiencing a dearth of facilities to put it on the canals.  It's a shocking waste and went against my nature to have to throw everything away, but with limited space our 45 foot boat would've soon been overrun with bags/boxes full of recycling waiting for the next rare opportunity which could be days or weeks away. 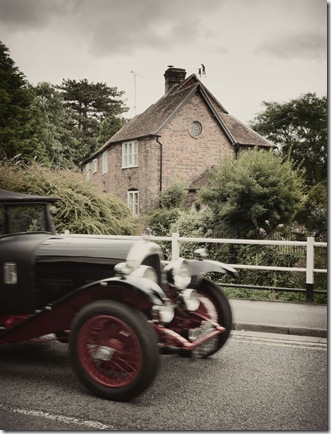 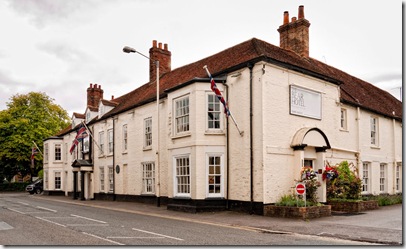 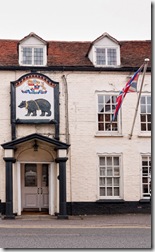 The Bear Hotel, one of England’s oldest coaching inns, and the focus of hospitality since 1464 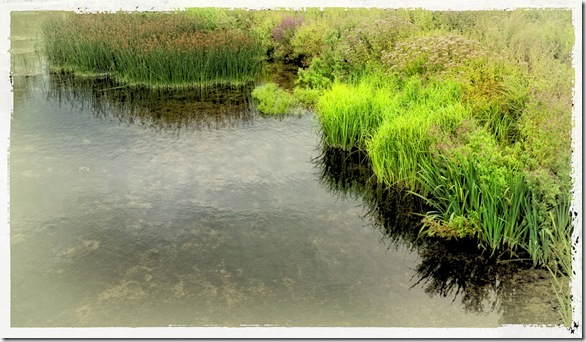 The river flowing through Hungerford 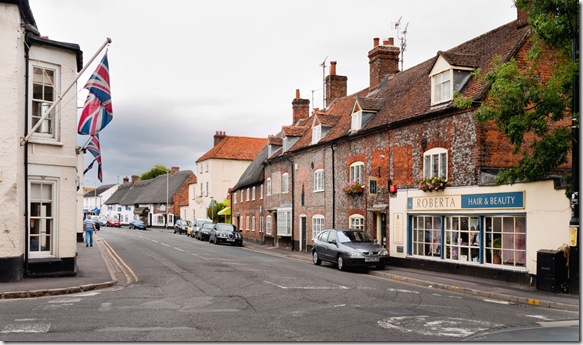 The road towards Marlborough, with The Bear Hotel on the left corner 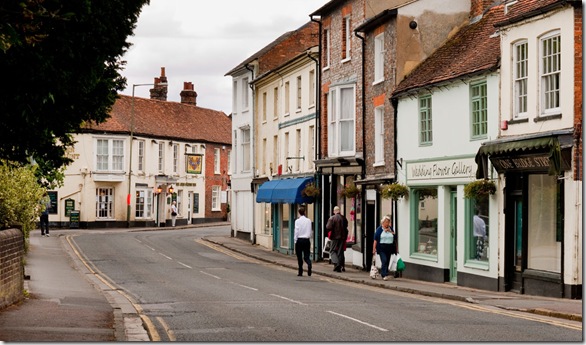 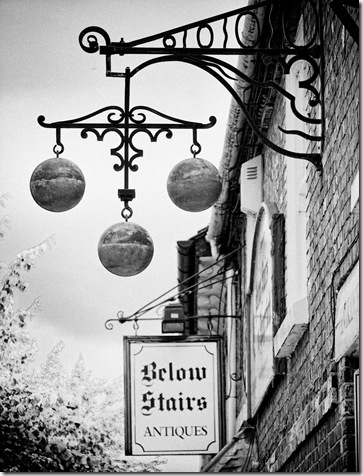 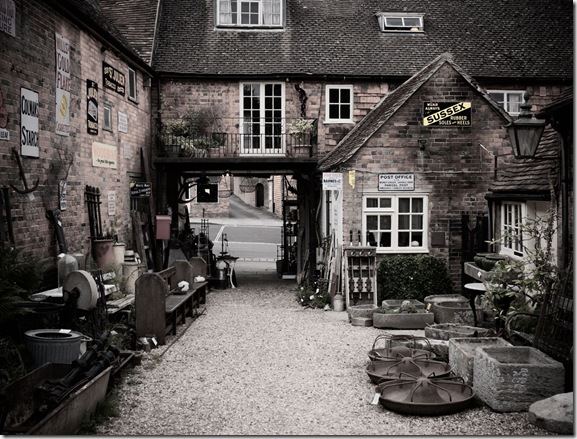 An array of artefacts amassed in their back yard

Some rather wicked arty shots from the 'Below Stairs' Antique yard follow ... 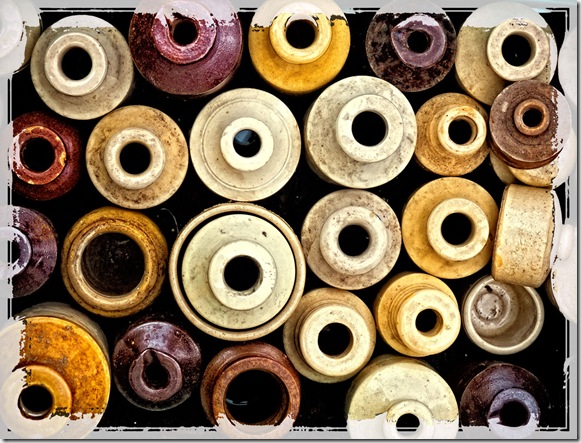 An assortment of antique pottery vases ... 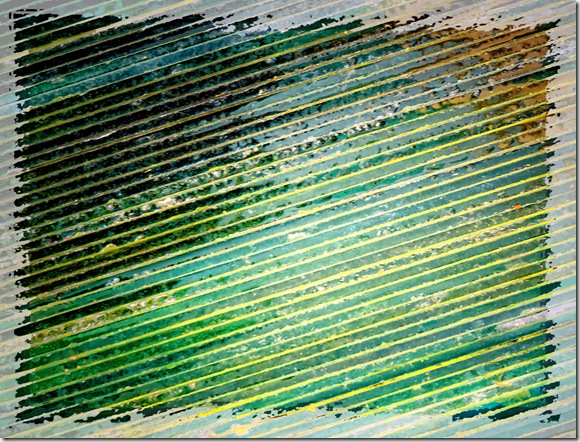 the ends of a pile of glass panes ... 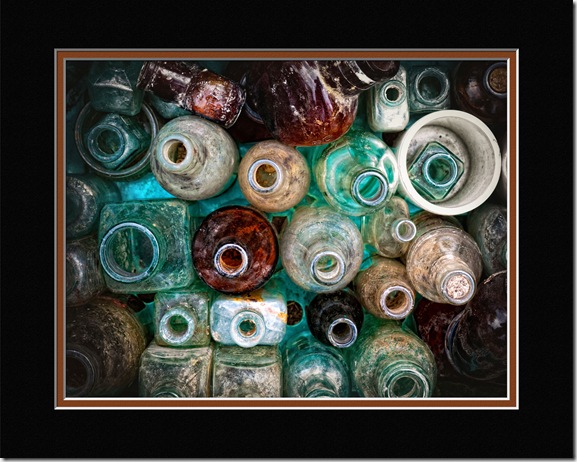 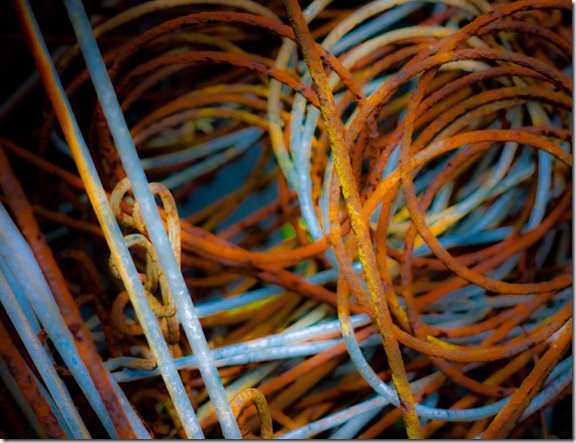 and a muddle of rusty wire

Isn't he clever?!  They could be made into posters - gorgeous photos. 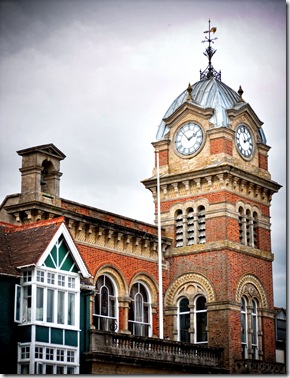 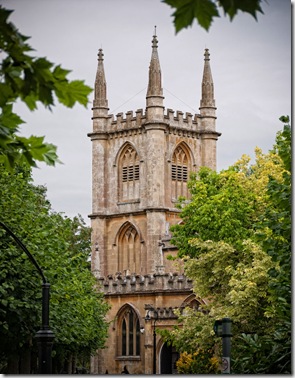 After satisfying our curiosity in Hungerford, we returned to the boat and late in the afternoon moved on a few miles and locks, mooring eventually at Great Bedwyn, once again on the bank of the canal. 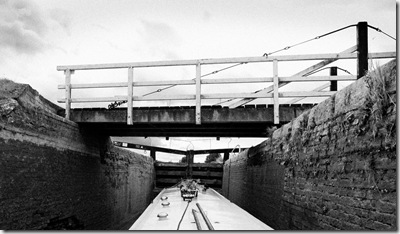 You have to open the swing bridge before filling the lock - seems obvious when the lock is full but a bit of a puzzle when it's empty!

The canal levels here are well down at the moment, but at least it's still open - not like the poor 'Leeds and Liverpool' Canal 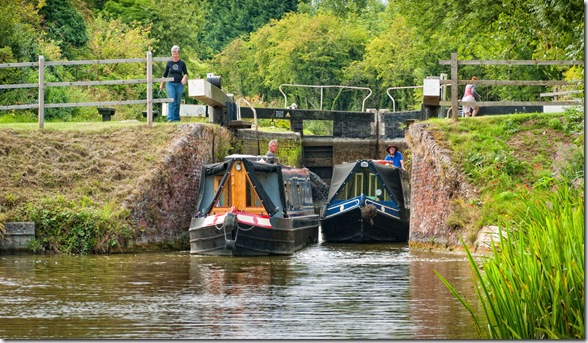 Good to see some boaters sharing locks to save water 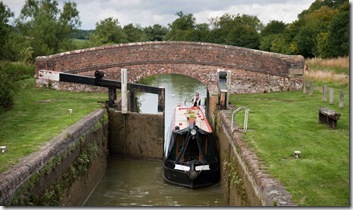 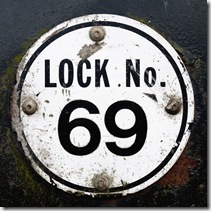 Only 68 Locks to go till Bristol! 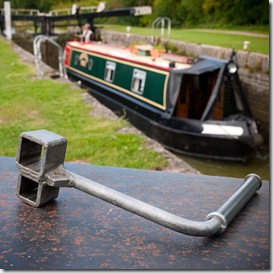 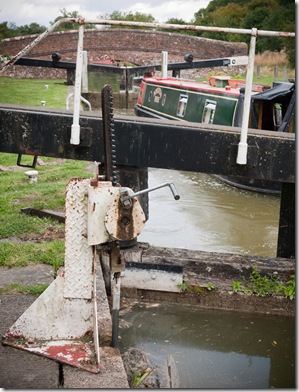 Interesting paddles where you have to lean way out over the canal to wind up and down, of course you can't lower the paddle with the gate open!  Rather precarious to say the least - especially when the windlass doesn't fit snugly and you're afraid it's going to slip off and send you careering into the swirling water 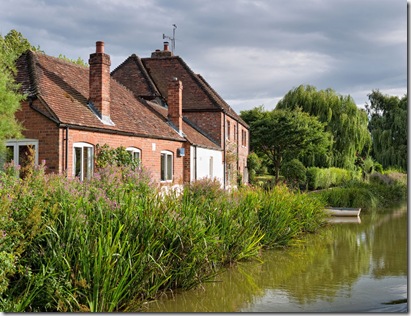 Can't get much more canal-side than these cottages 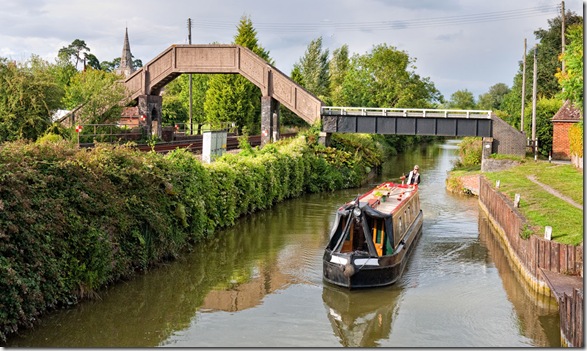 The railway-canal footbridge at Lower Bedwyn

Shortly after we arrived at Great Bedwyn it bucketed it down with rain - ominous, dark clouds on one side of the canal and bright sunshine on the other, which produced a dazzling triple rainbow -breathtakingly beautiful, isn't nature incredible? 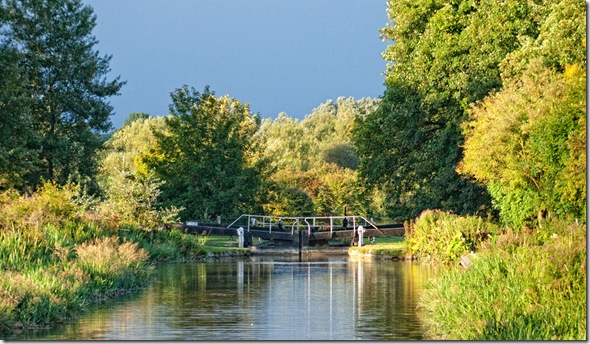 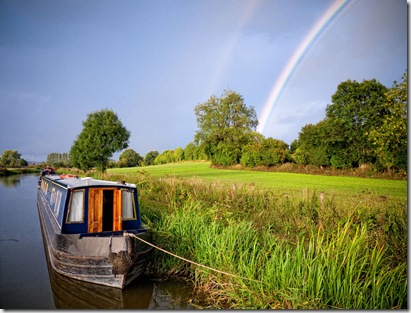 Looking behind our mooring ... 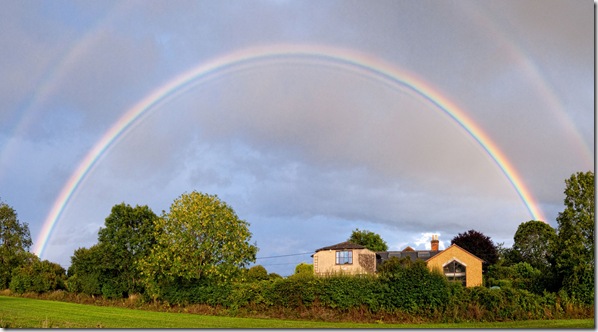 and to the side - wow!!! A spectacular sight! 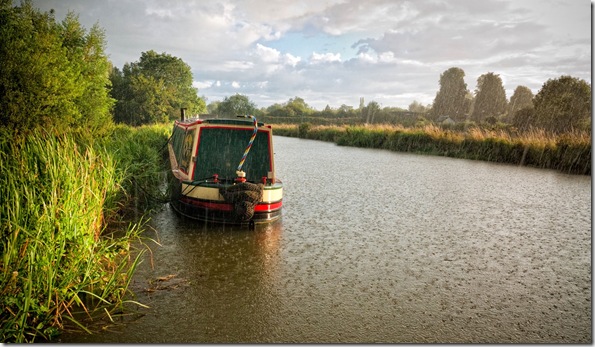 We'd been recommended to try the Cross Keys pub a short walk away for a drink, according to our Nicholson's guide it's run by ex-live-aboards, but the evenings are definitely getting darker now and the weather was pretty dire, so we just had a cheap and cosy night in. 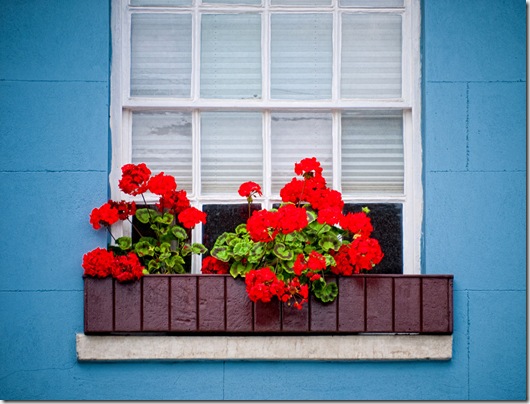