An 'extra'ordinary day on the fascinating Kennet and Avon Canal

Our first full day on the Kennet and Avon on Sunday and we still didn't manage to get up and away terribly swiftly!  Jon, Ruby and crew from NB Guelrose left an hour or so before us and we didn't see them all again until we were mooring up in the evening.  We did manage to set off mid-morning though, without going to investigate anywhere on land - mainly due to there not being much to check out locally as far as we could make out. 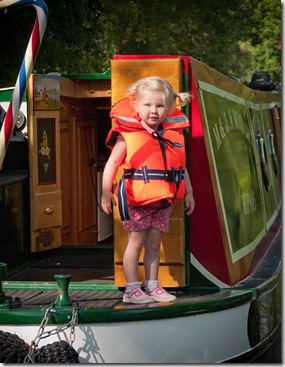 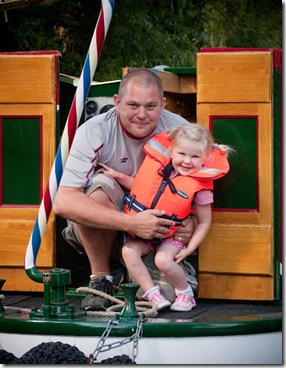 Ruby and Jon getting ready to start their day's journey 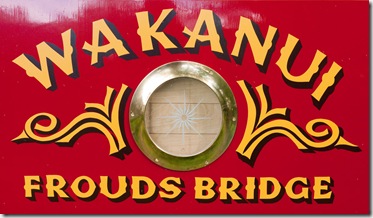 We've seen this narrowboat a few times recently, and on Sunday it moored up alongside us.

Wakanui is a Maori word meaning Waka (canoe or craft - pronounced 'woka') and nui (big - pronounced 'noo ee'). The present owners of this narrowboat must have got their pronunciation from an Australian as they described it "Wacka nui". 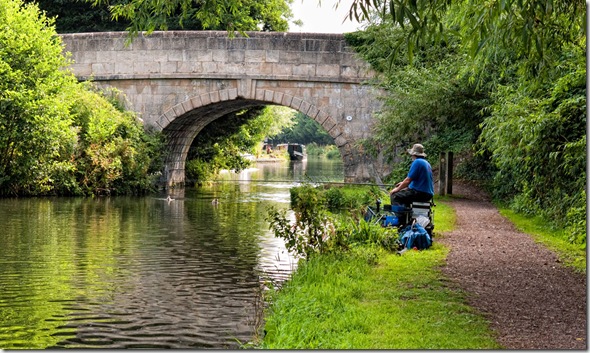 It was a day filled with an amazing variety of locks and lift-bridges, and of course after spending too much time on the boat passing through 'manned' locks it was a day of much-needed physical exercise!

It was also a gorgeous sunny day, so along with the manual labour I may've sweated off a couple of pounds with a bit of luck - there's certainly some tough lock gates to negotiate, but we're already finding that it's well worth the effort. 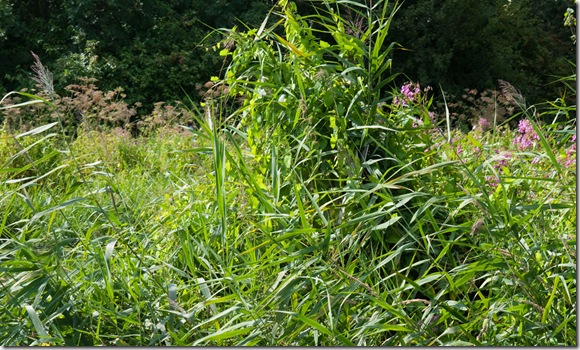 Our first dilemma of the day was this direction sign - yes under there somewhere is an arrow pointing right to the lock, not left to the weir neither of which could be discerned from the junction 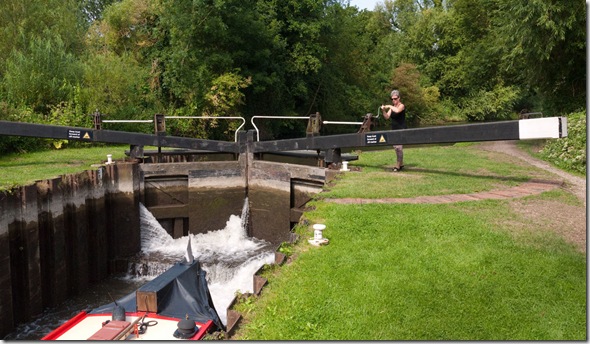 Then we came across a few normal looking locks like this ... 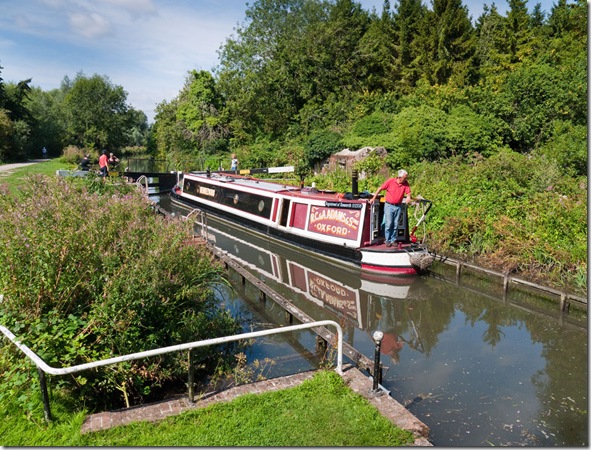 and then, unique to the Kennet and Avon, a strange turf-sided one like this (you're requested to leave the lock empty when you've passed through so that the foliage doesn't become sodden) ... 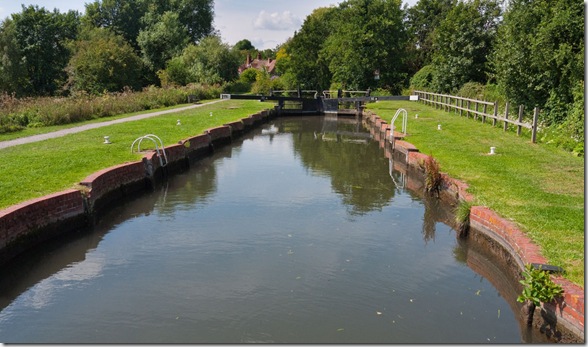 and beautiful scalloped shaped locks for no apparent reason than aesthetics 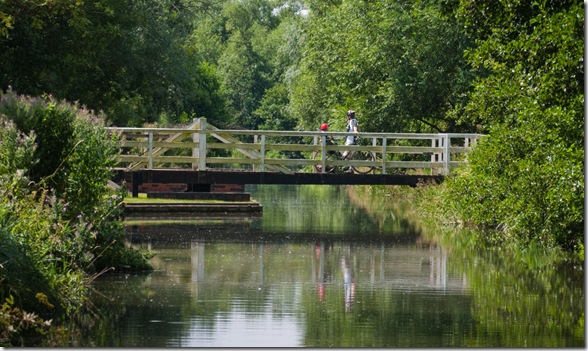 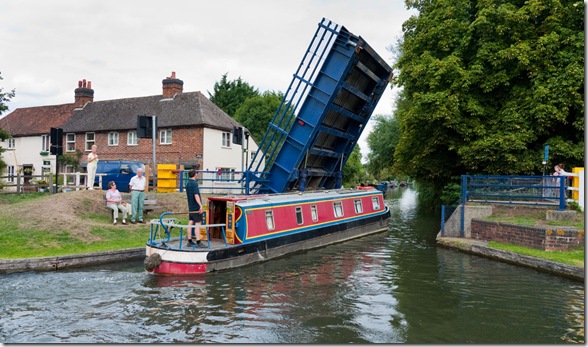 as well as the odd lift bridge 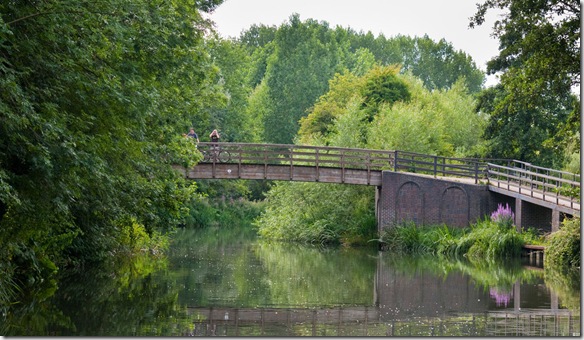 plus towpath change over bridges 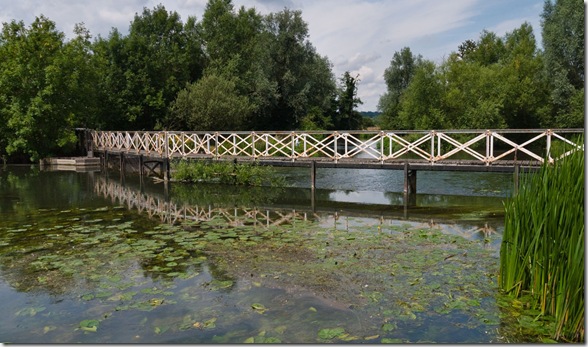 weirs to watch out for 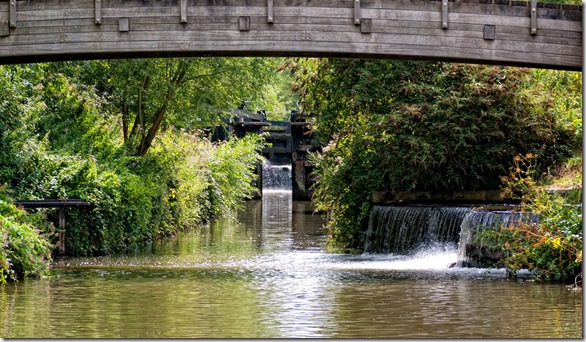 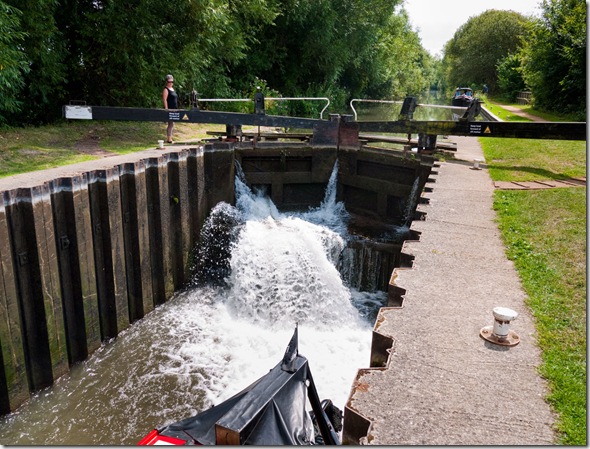 some deep and feisty locks

as well as lots of Gongoozlers watching

but otherwise a very ordinary day!

We travelled just 8 miles, working our way through 9 locks, 6 swing bridges and one lift bridge during the day - quite a mammoth task, but that's going to be an almost daily adventure for a few weeks now!

Arriving at Woolhampton after 1800hrs, it was a bit challenging to find a mooring, but we did eventually settle on a rural spot not far from Old Woolhampton Lock, sufficient distance from the pub to prevent us from being tempted into spending any more money - we need to be much more frugal from now on if we're going to manage until the end of October!  Once again we had lots of nettles on the bank for company, but not as bad as our overnight stay in Goring, and we didn't need to leave the boat. 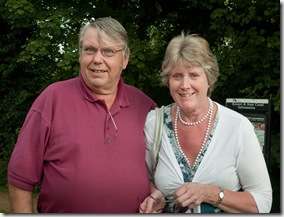 Barry got talking to a couple at one of the locks who've owned a narrowboat for 30 years, but it's still not quite finished for various reasons. They said the painting and blacking is due for completion next week, but it sounds as though they're not holding their breath in case they're disappointed once again!

Barry also finally managed to get around to placing a map of the waterways, including locks, winding holes, marinas, etc, onto our blog home page. This was kindly supplied by Tom Jones and his wife from Australia (no! not that Tom Jones - he's from Wales!) who sent it to us earlier in the year, just prior to us leaving New Zealand. Thanks Tom, it's been a handy tool on our travels.

On Tuesday we'll be heading to Newbury where we will explore and possibly stick around for a day. 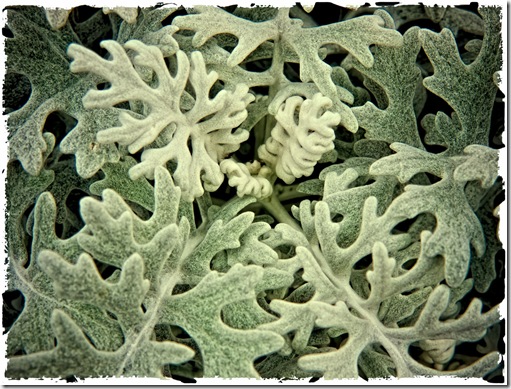 Not really a flower photo, but I love the colour of these, found in many floral displays, if only I could remember what it's called ...