Pewsey to Devizes and the succession of vivacious visitors begins ...

Jenny and John were arriving in Devizes around 1030hrs on Sunday morning, swapping cars then heading to us in Pewsey, so we needed to be up and about fairly early despite the late night and Barry's bit of a hangover!  All went to plan and we moved along to Pewsey Wharf to fill up with water, arriving just as Jenny and John got to the great pay and display car park there.  We also bumped into Debs and Pete from NB Lorna Doone, and said a quick farewell for now - only realising later that Barry had lent Pete a windlass on Saturday and not got it back - damn!  We have (had!) two short handled ones and one long handled which isn't easy to use at most of the locks.  Hopefully we'll pass them at some stage on our return journey and retrieve it :-( 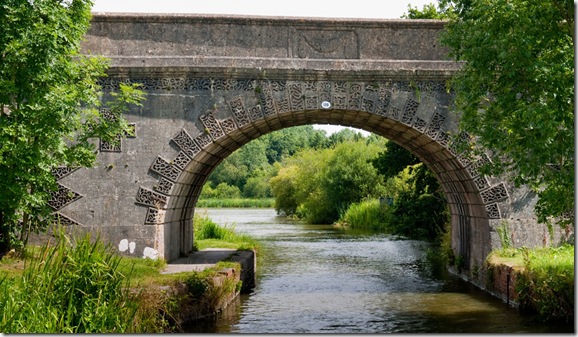 The rather grand 'Lady's Bridge', built around 1808 by Rennie to appease Lady Susannah Wroughton, who opposed the building of the canal through her land 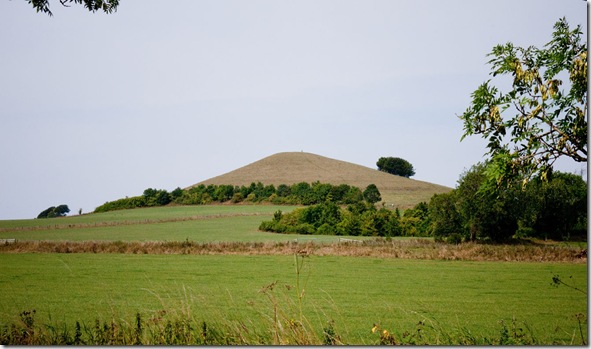 Within no time at all John was driving like an expert, while Jenny and Sandra took the chance to catch up on event's since we'd last met, chatting and chilling at the pointy end. 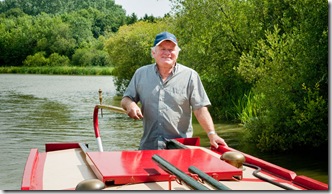 John took to steering like a duck to water 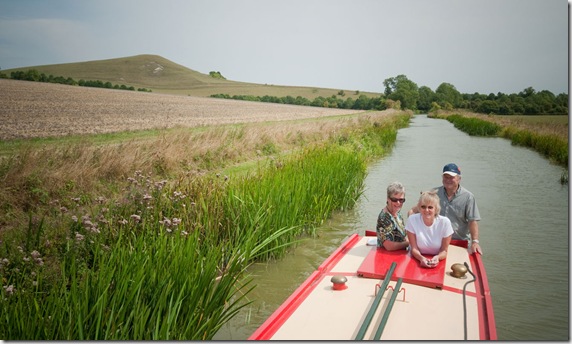 Sandra and Jenny join John at the stern, passing Woodborough Hill on the way to Honeystreet

Just before our chosen lunch stop at Honeystreet, we spotted the wonderful chalk Alton Barnes White Horse on the hill:

"In 1812 Mr Pile paid twenty pounds to a journeyman painter, John Thorne, also known as Jack the Painter, to design the white horse and have the work of cutting it carried out. Thorne designed the horse, then sub-contracted the excavation work to a John Harvey of Stanton St Bernard. Before the work was finished Thorne took off with the money, and Mr Pile was left to pay out again. Thorne was eventually hanged, but what crime that was for seems not to be recorded."

Wiltshire is the county for white horses, having thirteen within the boundary - there's at least twenty-four around Britain. Most of the white horses are chalk hill carvings, and the chalk downs of central Wiltshire make it an ideal place for such figures.  No-one really knows why they were made, most of them having been completed in the last 300 hundred or so years, though one in a place called Uffington is of certain prehistoric origin, being some three thousand years old.

They are certainly magnificent to see from a distance, and are generally maintained by local people. 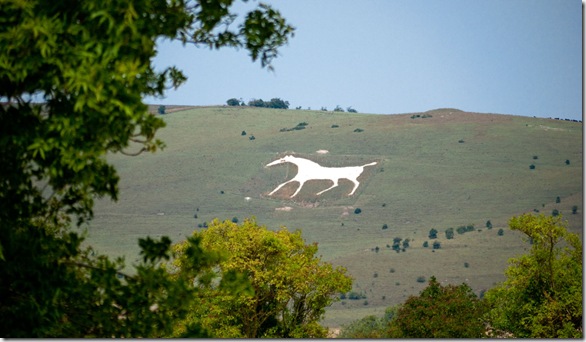 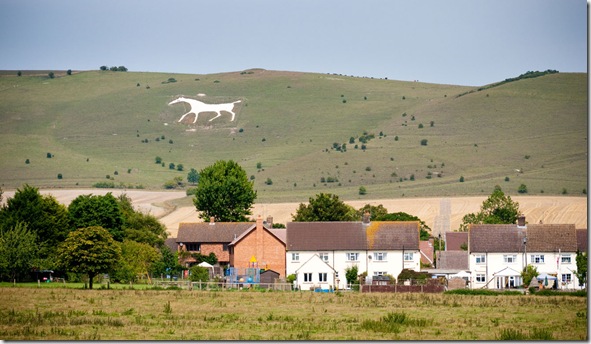 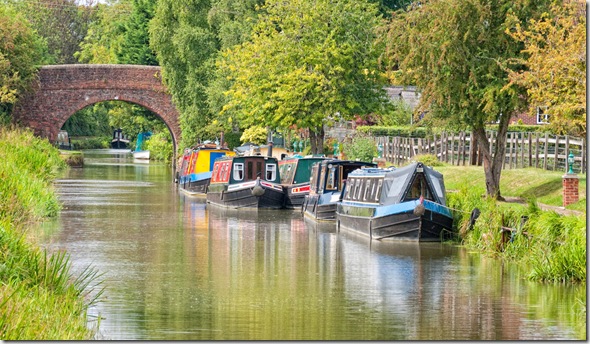 The Nicholson's Guide suggests that Honeystreet is:

"A traditional canalside village, complete with sawmills, incorporating some new development and, arguably, one of the most attractively landscaped and charming on the waterways."

Well we must've missed something somewhere, pleasant as it was, it definitely would never have met the above description from what we saw of it - bizarre!  Did they actually stop there when they wrote that I wonder?  It's an OK place, but not a patch on many canalside villages we've encountered.  The Barge Inn looked lovely, but that was about as impressive as it got, despite our walk across the bridge to the main part of the village.  From reading NB No Problem's blog for Saturday, they certainly didn't have a problem at the said establishment on Saturday night! 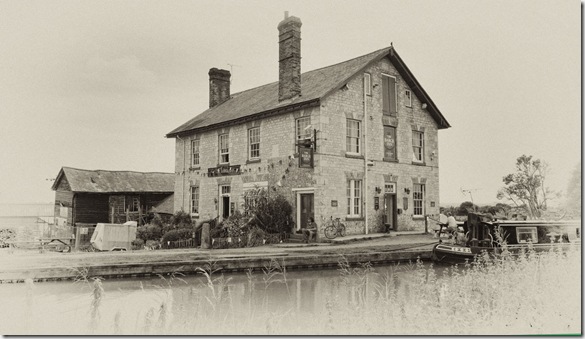 Leaving Honeystreet onwards to Devizes, we passed a place called Bishops Canning which, according to our AA Book of British Villages, has an interesting past.  Apparently, one moonlit night probably in the 16th century, a patrol of Excisemen came across two Bishops Canning villagers raking the surface of a local pond.  When he asked them what they were doing they pointed to the reflection of the full moon on the water and replied that they were trying to fish out "thik yaller cheese".  The Excisemen thought they must be idiots and rode away laughing at them - they were actually hooking out illicit kegs of liqour that had been hidden in the pond.  It's said that all Wiltshire men are known as 'Moonrakers', and there's a hire boat company of the same name with many boats on the Kennet and Avon.

Possibly another place to stop on our return journey if we have time ... 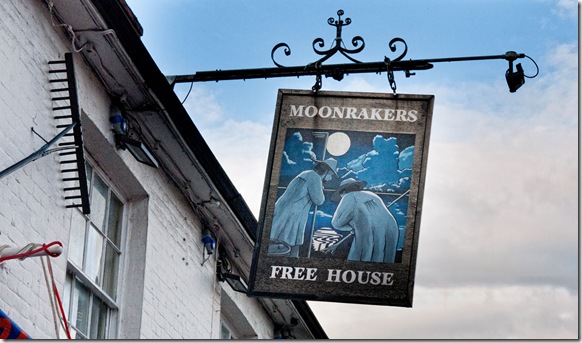 Moonrakers fishing out the cheese from the pond

A short while later, travelling along, I spotted No Problem and we slowed to a stop shouting 'Is there anyone home' - Sue immediately appeared from the stern and gave us both a friendly hug saying she'd been expecting us!  We chatted for a while but weren't going to stay too long, until we heard the engine make a strange noise and knew we'd got something wrapped around the prop - there'd been a large, thick, plastic bag floating by which had mysteriously disappeared so was the likely culprit. So we had no choice but to tie up to alongside No Problem, while I put the kettle on and made us all a cup of tea.  As luck would have it, Sue also had some cake so we shared that - delicious thank you!  Good to meet you both at last. 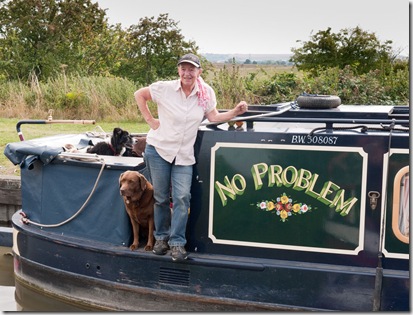 Sue from NB No Problem

As we were standing chatting, an astonishing sight passed us by and I'm sorry, whoever you are, but I seriously couldn't resist taking a shot - well you must be fair game if you 'dress' like this while steering a narrowboat along a public canal - hilarious! 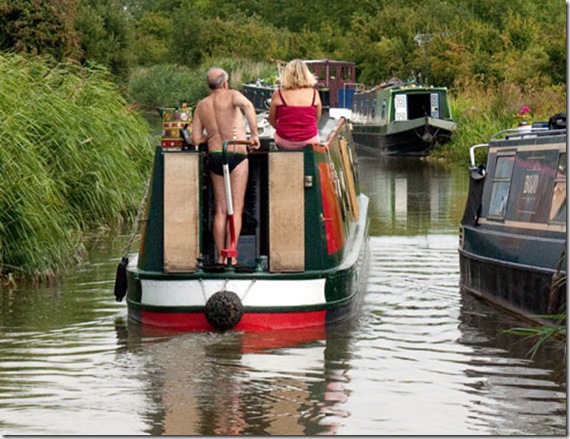 Possibly the 'cheekiest photo of the year' - maybe he's just ready to go for a swim at any moment, just in case of emergencies? Sue and Vic - been living aboard for 8 years and blogging for 6 years - fantastic!

Saying goodbye to Sue and Vic, we continued our journey, coming across some extremely narrow and weedy canal.  Widebeam boats must find this section more challenging than most - you'd certainly find it difficult to pass another boat in one along this stretch. 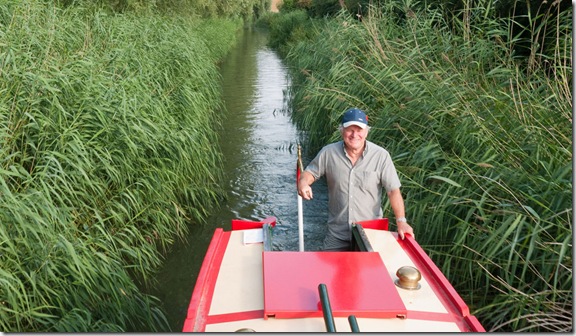 We're loving the Kennet and Avon, there's so much variety of waterway, accompanying landscape and urban developments, as well as boats and people ... 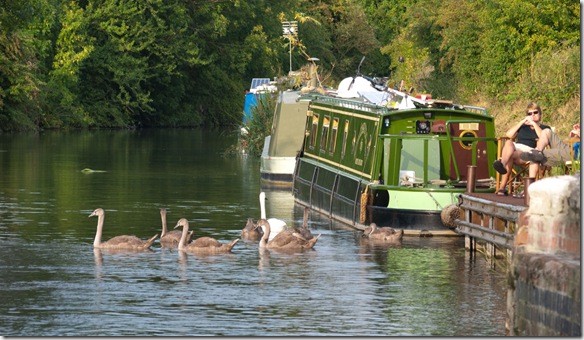 Chilling at the side of the canal on a sunny day 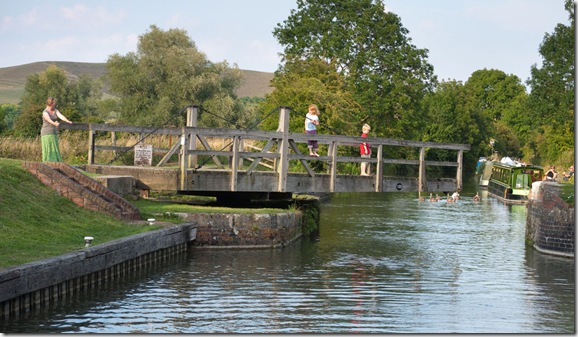 A happy family staying in a caravan nearby, are delighted to open the swingbridge for us at Bishops Cannings 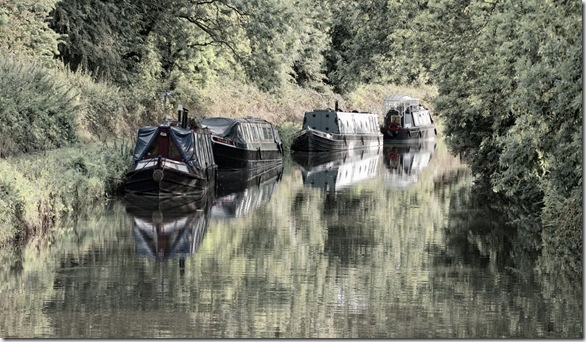 Masses of liveaboards along this canal who we're 'reliably' informed state on their 'BW License Application' that they're 'continuously cruising', but actually only ever move a few hundred yards!  A very cheap way to live in this glorious part of the country 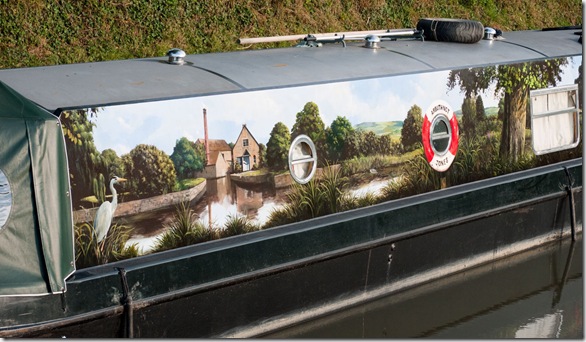 Guess what business this narrowboat has to market?!

We arrived at our destination a little later than expected, and had a bit of a bite to eat before Jenny and John returned to their car and drove back to Devizes, which almost brought to a close a smashing day of scenery and camaraderie.  It was so good to catch up again, we count ourselves incredibly lucky to have so many good friends. 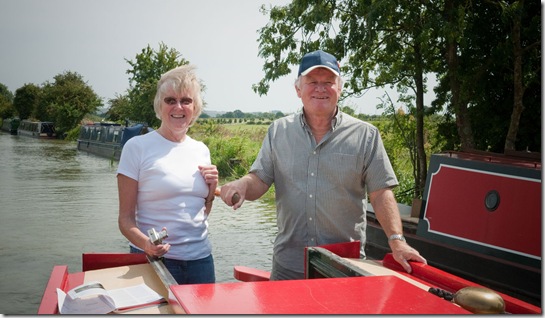 A little later, we noticed a family of swans and cygnets emerging from the canal and waddling up the slipway next to where we had moored up.  Barry asked me to get his camera to get a shot of him getting up close and personal at the top of the launching ramp.  We're not really sure why people have been so brainwashed into believing that swans are such dangerous creatures, sure they'll give a bit of a bark and a hiss, but we've never encountered any real hostility so long as we've treated them with respect ... 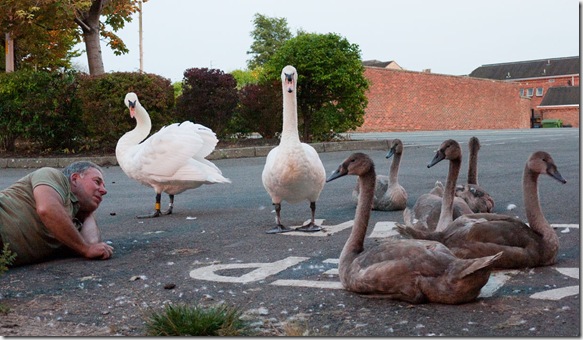 Staggering isn't it?  Such stylish birds, not so scary at all, awesome

A variety of ducks swimming around

Our plan is to complete the Caen Hill flight on Monday, sadly No Problem aren't doing it until Tuesday otherwise we would've shared with them, but we need to get through it before our next guests, Sandra and Dickie, arrive on Monday afternoon - well that was the plan ... 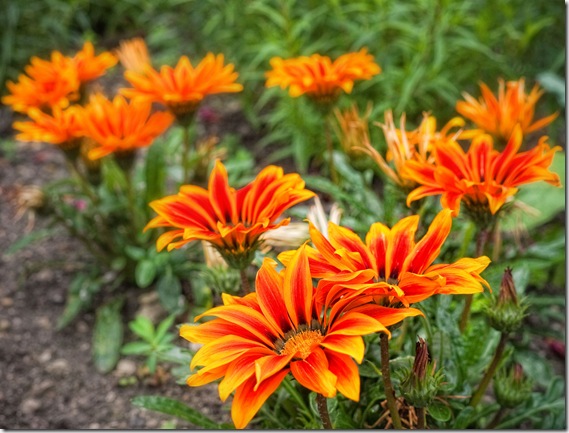 The end of another bright and beautiful day