Woohoo! We made it there intact!!

Thank you to the 3 people (so far anyway!) who've ticked one of the feedback boxes for yesterday's post, much appreciated! 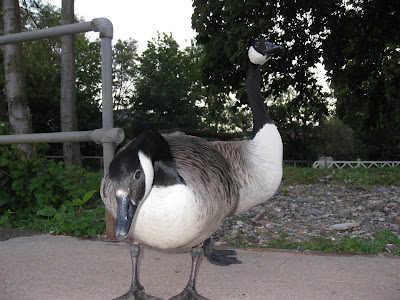 Two of the island's geese came to say goodbye to me last night, at one point I thought they were going to climb on board!!!!
OMG!!!! I drove the boat to the Marina and only almost beached it once!!! My heart was in my mouth, my hands were shaking, and Bob was at the front of the boat - not at the back with me ready to take over at a moments notice as I expected – in fact I may even have hoped that he would drive it, but no, he obviously thought I was able to or just wasn’t sure he could! Still it was good to have someone on board with me directing me and laughing with me when the boat didn’t want to go where I tried to get it to go, there was a bit of a wind blowing which didn’t help! But the only problem was leaving the mooring and trying to turn it to go to the lock (quite a sharp bend, so we had to go up river a bit, in fact we almost reached the bridge before I got it all under control!!), once I finally managed to do that it was ‘plain sailing’ so to speak. 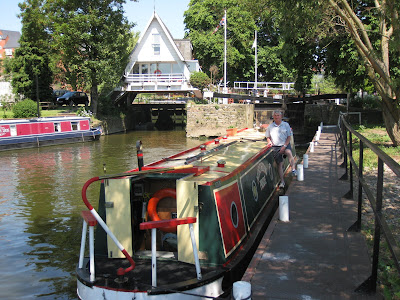 Bob looking a little greyer I think after almost going into the trees at the side of the river - the flag got bent again, sorry Deb!! But it's still intact to fight another day ... 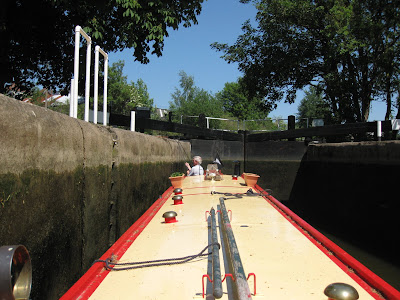 Safely into the lock and holding the fore rope 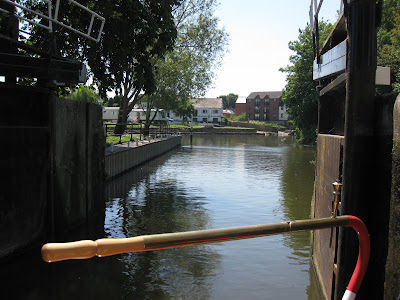 Looking back at the lower Avon 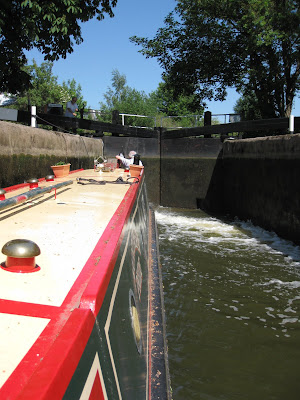 Chris, the Monday relief Lock-keeper, releases the upper Avon slowly into the lock - hold on tight! 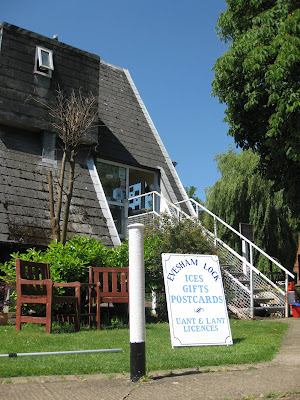 I even managed to drive the boat into the Marina without crashing, so was very proud of myself! Well actually I tell a lie, as we parked up I did bang a bit into the side, but nothing major!
They are certainly not the most helpful people at Evesham Marina – is it just people who work in Marinas I wonder? Are they a special breed or something? Do you have to be incredibly stuck up and act as though anyone who comes in for anythig is just a pain in the preverbial? Is that on the 'essential characteristics' on the person spec??? Maybe we've just been unlucky and caught people at a bad time a number of times ... 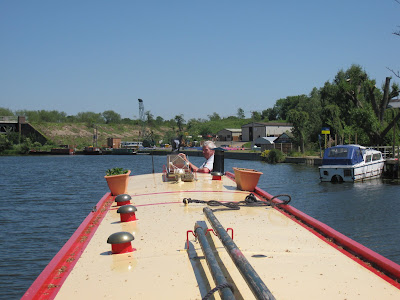 Almost at the Marina
I hated leaving her, the boat has become like a friend or another child somehow, so I hope they look after her accordingly. I’ve grown very attached, especially over the past 10 days when we’ve had to look after each other …

Ah well, she'll be looking much better with a shiny new bottom when we pick her up next week, and it’ll be back to moving along and finding new places and people, hurrah!

For now though, I'm going to have a busy 8 days travelling around some of my family – people that I'm very grateful to have in my life (especially as I normally live on the other side of the world to them!), and I shall relish each magic moment.
Posted by Barry and Sandra