“His pond fished by his neighbour …” – more Shakespeare and beyond … 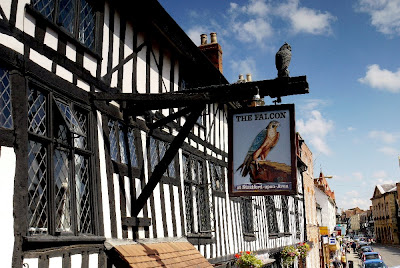 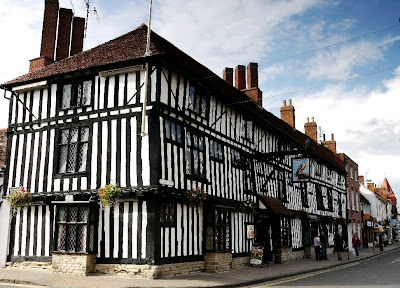 The Falcon Inn in Stratford-Upon-Avon 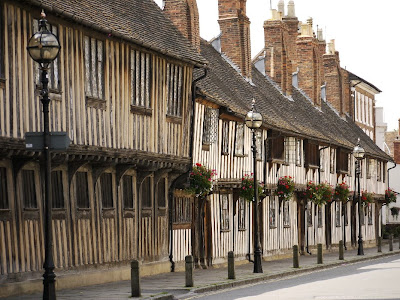 The 'Alms Houses' in Stratford
Monday 15 June
Big touristy day today! We did the open top bus tour and the other 4 of the Shakespeare Houses – Anne Hathaway’s cottage (Shakespeare’s wife), Mary Arden’s house (Shakespeare’s mother), Nash’s Place/New House where Shakespeare died and Hall’s Croft where his eldest daughter and her physician husband lived. 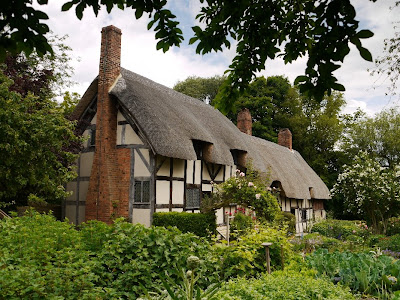 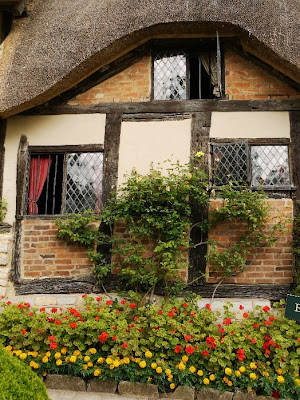 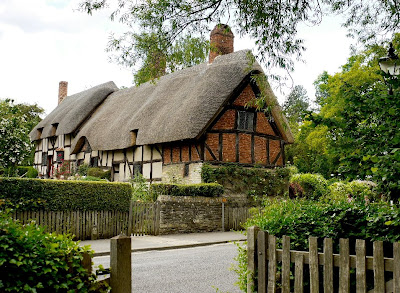 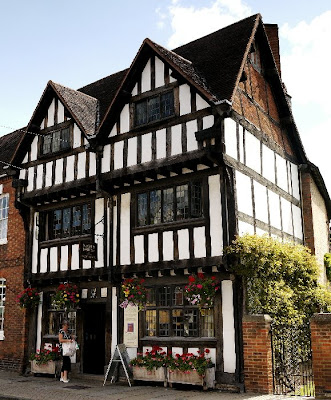 Nash's House. Rebuilt after it was torn down by an irate previous owner (pissed off with too many Shakespeare tourists and that was in the 17th century!) 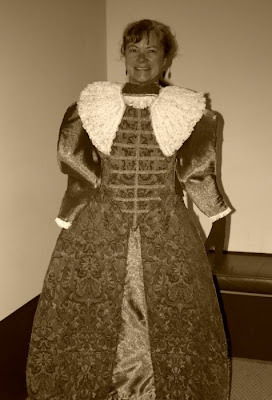 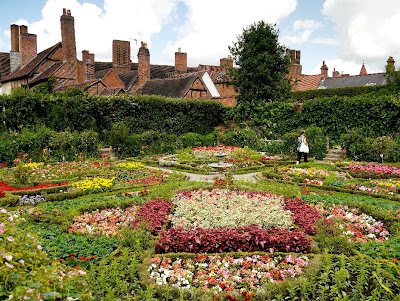 The knot garden at Nash's House
At Mary Arden’s house there was a falconry display and Barry and I both had a go at feeding the Harris Falcon – beautiful birds of prey but not for the faint hearted! 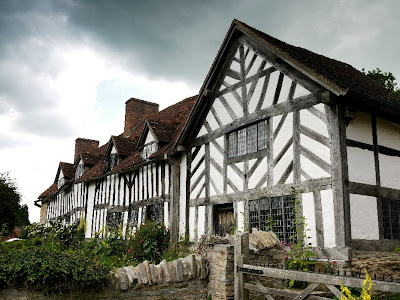 Until 2000 they thought this was Mary Arden's house, but got it wrong! 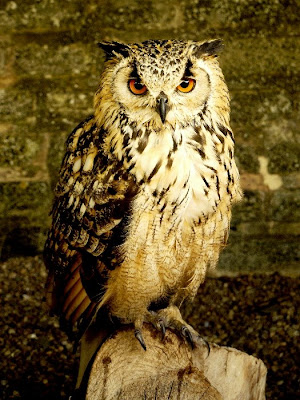 Towit, towit to-Who, Who, Who's this? 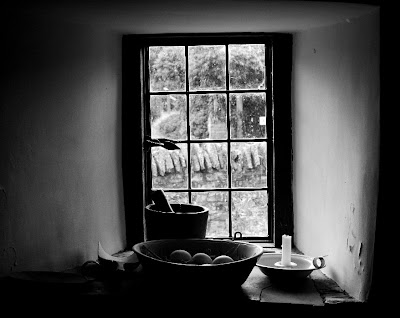 One of the rooms in Mary's place 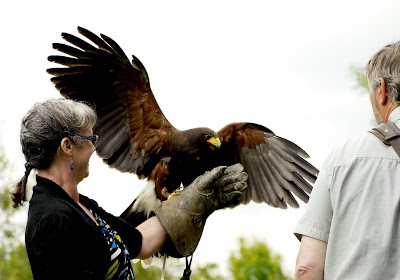 Feeding the Harris Falcon - incredible experience when it flies onto your hand! 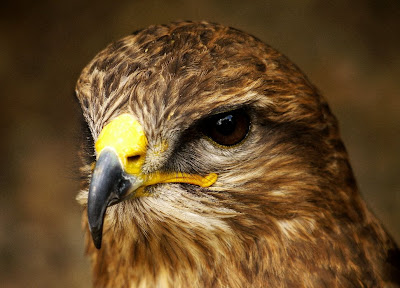 At all the homes we learnt heaps of history and lots about where different English sayings come from and customs of the 16th and 17th Centuries. For example, it was the wife’s job to make sure that the fire in the kitchen didn’t go out; if she let it die then her husband was allowed to beat her so long as he didn’t use anything larger than the width of his thumb. Appalling isn’t it? And here we are in the 21st century and some bastards are still beating their wives and girlfriends though for very different, but equally spurious reasons.

In the evening we had a fabulous night out (it’s not often that we get dressed up now!) at the only theatre currently open – The Courtyard – and saw ‘The Winter’s Tale’. It was absolutely awesome! We had the cheapest tickets available, right up in the gods for £15 each, so we were looking down on the play. I bought the book and tried reading the Shakespeare but got a bit lost after a few scenes so read the notes which succinctly explain what happens scene by scene. Basically the King of Sicilia drives himself crazy by mistakenly believing that his heavily pregnant wife is having an affair with his best friend the King of Bohemia and uses colourful language to say so – hence the title of the blog! There are themes of death and re-birth, comedy and tragedy - one of his later plays.

Barry only read the first half of the notes unfortunately. I could more or less understand everything that was going on, and of course it helps to have studied Shakespeare previously, and the acting, costumes and props were magnificent. There was one scene where the actors all came out dressed, I think, as sheep with huge penis props which they waved around and banged up and down – hilarious, Shakespeare was such a tart!!! Barry got lost not long after the play started, so I tried to explain what was going on but it’s difficult during the production to do so! Ah well, he almost enjoyed it! I think with the British accents – there was a Scotsman and a Welshman in the cast (he also thinks English people have accents, but there really weren’t any other than the Queens English!), along with the fast paced dialogue of Shakespeare, it can be hard to keep up. 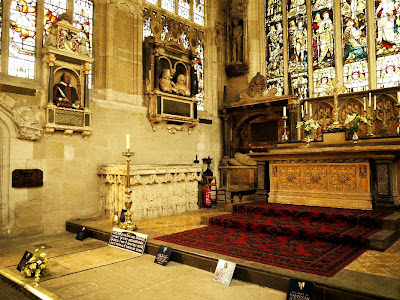 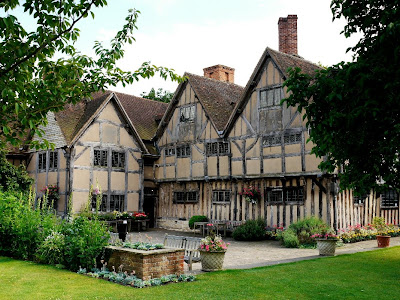 Hall’s Croft
So, all in all,we think we have well and truly ‘done’ Shakespeare and Stratford now!

Tuesday 16 June
A big morning – a long walk to the laundrette with 2 big bags of dirty laundry, and time spent waiting for the washing and drying. It’s not cheap either, 3 loads of washing and drying half of it cost us £18! Amazing what home comforts one takes for granted on dry land. 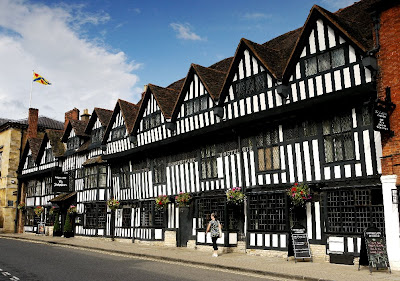 Walking into town for change for the washing machine!!

Then it was off to the lock again to be watched by the hordes of tourists – Barry got chatting to some friendly Americans who tentatively helped me to work the lock bless them. Then off around the corner to the Marina for a pump out, and a pump in of fresh water. Only £10 for a pump out at Stratford Marina – it was £20 at Evesham – and very friendly staff for a change!!!

We’re now on a really tight budget; 5 months of no pay will start to take its toll. So the threat of only one pint of ale a day, and the beans on toast diet, is looking likely in the near future! However we had 3 nights in Stratford for nothing, and all in a central location, so very cheap accommodation, though we made up for that paying for all the tourist sights and seeing the play! But it had to be done, it’s so quintessentially English!

We left Stratford in the afternoon, having again come through the lock with all the gongoozelers (people who watch canal boats!), and are on the canals once more. It’s going to take a bit of getting used to the narrower stretches of water and only one lock gate.
18 Locks to the next mooring!!! ... 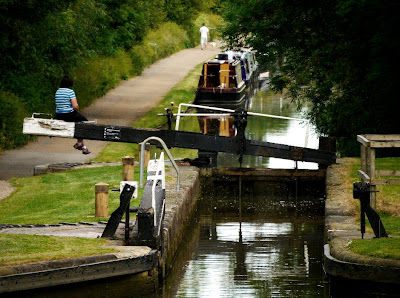 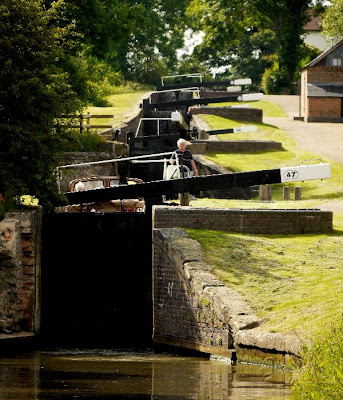 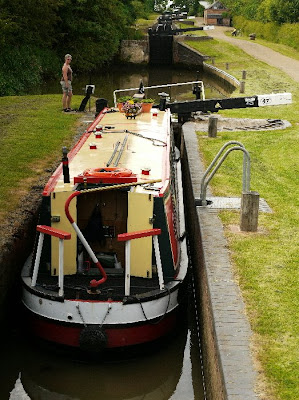 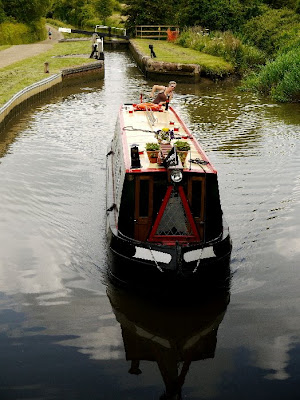 At one of the locks we actually got wedged as it was so narrow our fenders (the things which stop you from banging against the side when you’re moored up) got trapped and it took us a bit of heaving and pushing to get her free. 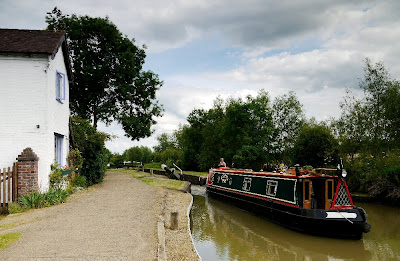 At another lock, we must’ve caught a fish in the lock gates because when they were opened there was this almost cut in half fish still thrashing about madly in its death throes - it was horrible, poor thing. 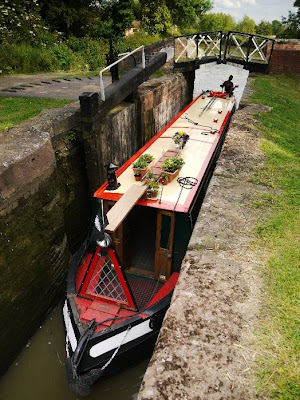 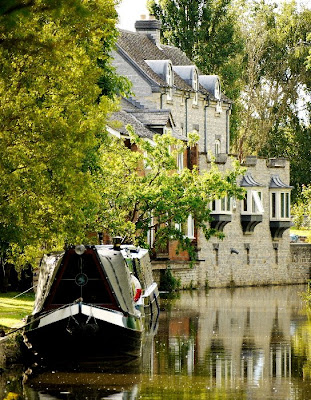 We went over another aquaduct, just past Wilmcote – well I went over it while Barry ran down to the road to take photos! He hadn’t quite got the shot he wanted and asked me to back up and start again – OMG I was nearly sick! Then, once I had started backing up, he climbed back up – I could’ve strangled him or beat him with a stick no wider than my thumb maybe?! Lol! Just jesting! He informs me I was travelling too quickly and he'd been waiting for a car to come along the road while I was up on the aquaduct to take a better photo, shame I’m not a mind reader aye?! 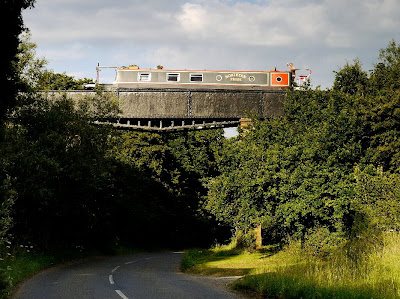 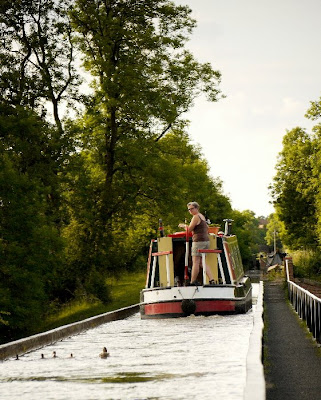 Are you following me??
Tonight, 18 locks later, we moored in a place called Wooton Wawen. It took us over 5 hours to go a distance that would’ve taken about 30 minutes by road! But what fabulous exercise, with the bonus of warm sunny weather. The only really pain was the masses of greenfly, we seem to have a plague of them about the rivers and canals at the moment and they drive you mad landing on you all over and are so damned itchy! 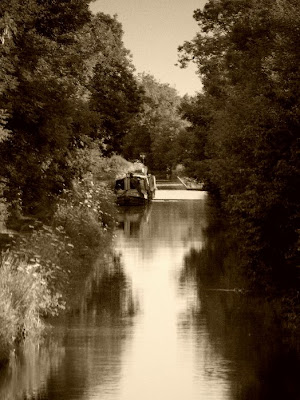